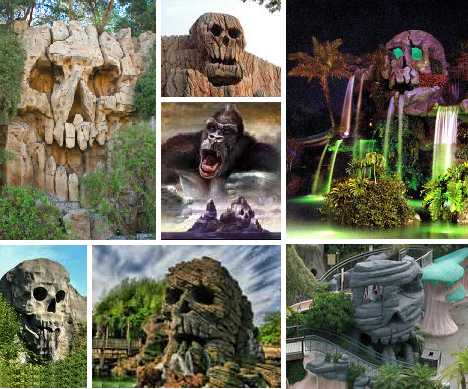 Looking to get a head in the housing market? Think location matters less than gray matters? From natural parks to theme parks, these 10 man-made skull rocks, mountains and islands show that home isn’t always where the heart is. 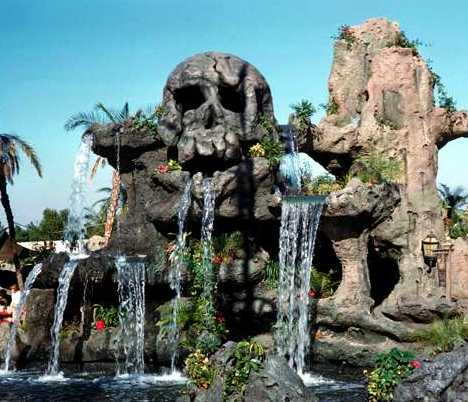 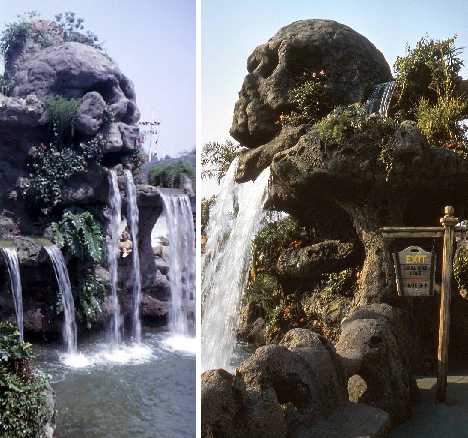 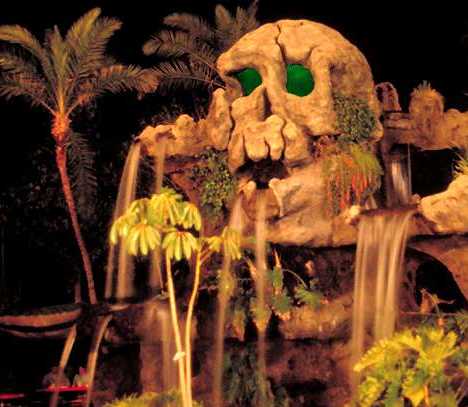 At night, Skull Rock really came alive (so to speak) thanks to cleverly positioned lighting and of course, those eerily glowing green eyes. Gone but not forgotten, Skull Rock continues to prompt fright and delight thanks to pre-1982 visitors who’ve posted their photos on the Internet. 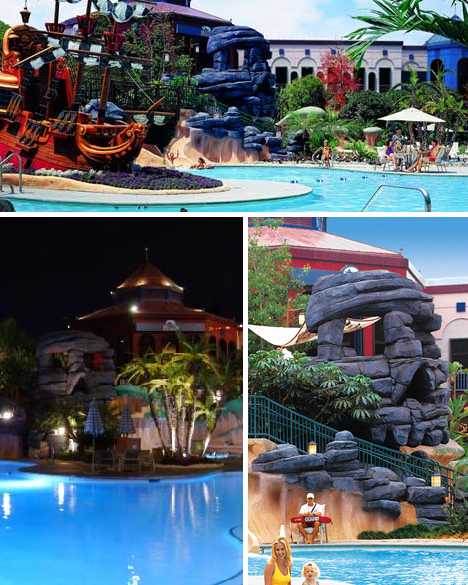 (images via: Expedia, TripAdvisor and Travelmuse)

Skull Rock at Fantasyland may be gone but it’s not forgotten – in particular, by Disney’s Imagineers who reincarnated it at the nearby Disneyland Hotel. The hotel’s Never Land Pool, which was included in a large-scale 1999 renovation, now features a new and updated Captain Hook’s Pirate Ship and a re-worked Skull Rock. 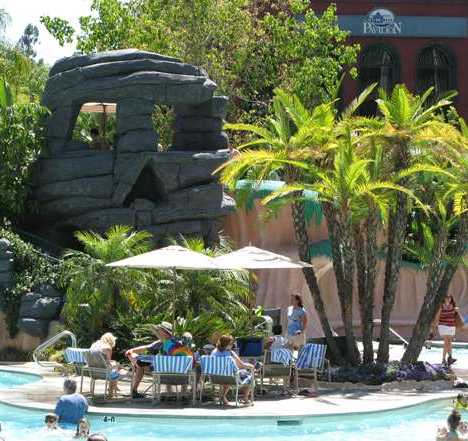 Though somewhat smaller than its Fantasyland ancestor and lacking its progenitor’s signature waterfalls, the revised Skull Rock at the Never Land Pool overlooks a hot tub and a 100-foot water slide. 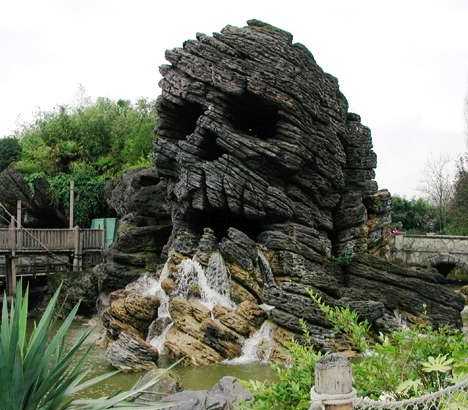 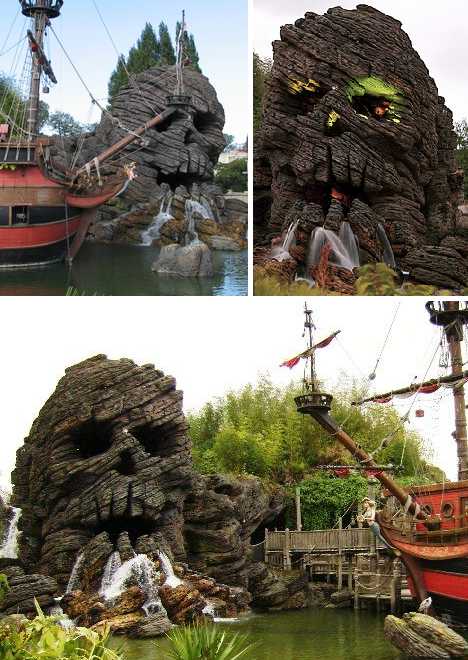 What is it with Disneyland and giant skulls? Whatever the reason, the entertainment empire seems to like them – almost every Disney theme park has got a skull or two. Take Disneyland Paris for example. The Gallic noggin can be found in the Adventure Isle section of Adventureland which features Captain Hook’s pirate ship, a suspension bridge and a pirate lookout. The giant skull itself displays a complex facade meant to evoke the appearance of tilted and eroded sedimentary rock. 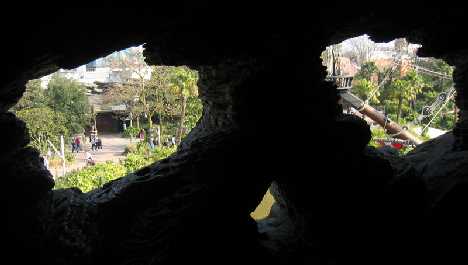 Unlike most other skull rocks, the one at Disneyland Paris was designed as a cave. Visitors who enter can look out through the eye socket windows and get a skull’s eye view of Fantasyland. 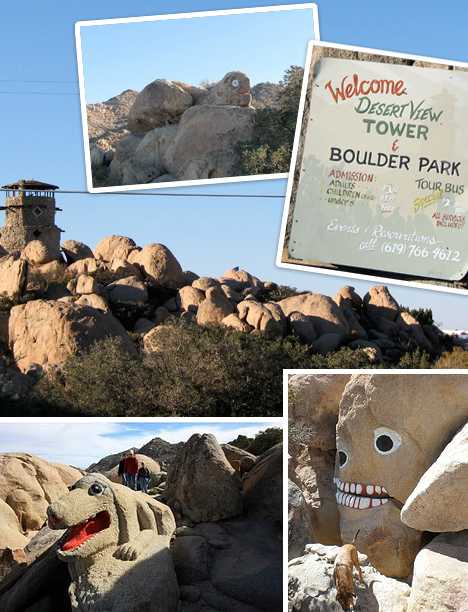 Desert View Tower, located along I-8 between San Diego and El Centro, was built in the mid-1920s. Declared a California Historical Landmark, the 70-ft (21m) tall tower and adjacent Boulder Park are striking examples of folk art that offer visitors a hands-on, interactive experience like no other. 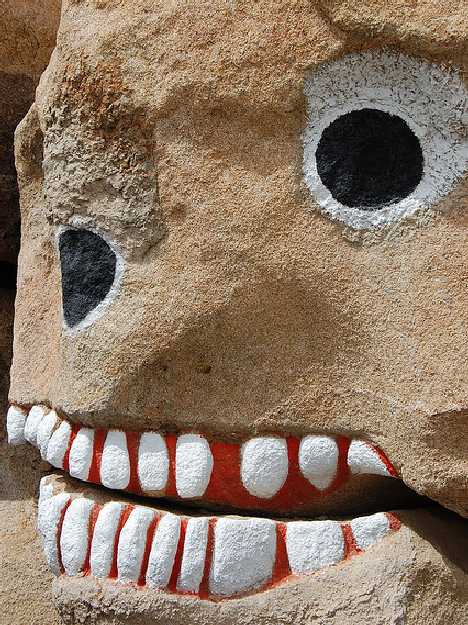 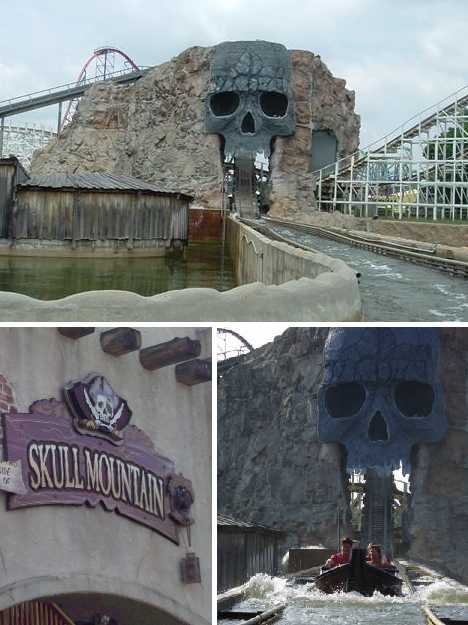 Skull Mountain, a 1,377 ft (420m) long enclosed roller coaster at Six Flags Great Adventure & Wild Safari in New Jersey, USA, opened in 1996 and is one of the theme park’s most popular attractions. Strobe lights and sound effects provide a sufficiently spooky atmosphere during the ride, which only lasts a minute and a half but seems longer due to a series of unexpected twists and turns along the way. 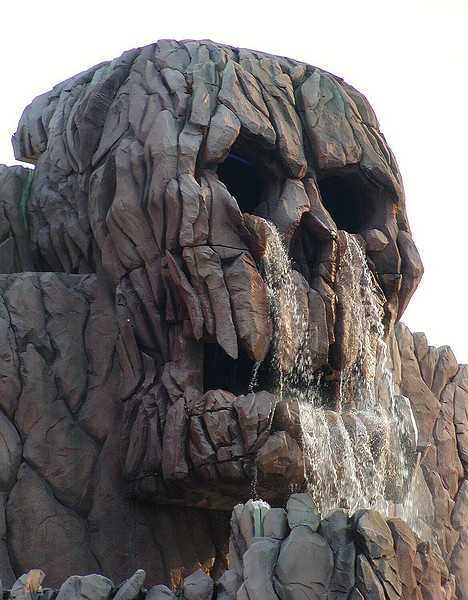 Due to its enclosed format, Skull Mountain is one of the few large roller coasters to remain open during heavy rain and thunderstorms. That doesn’t mean guests are guaranteed to stay dry, however. The huge skull on the ride’s front facade incorporates a waterfall that can be turned on and off at the park’s discretion, allowing water to pour out of the skull’s eye sockets. Be prepared to get “cried upon” on hot, crowded summer days! 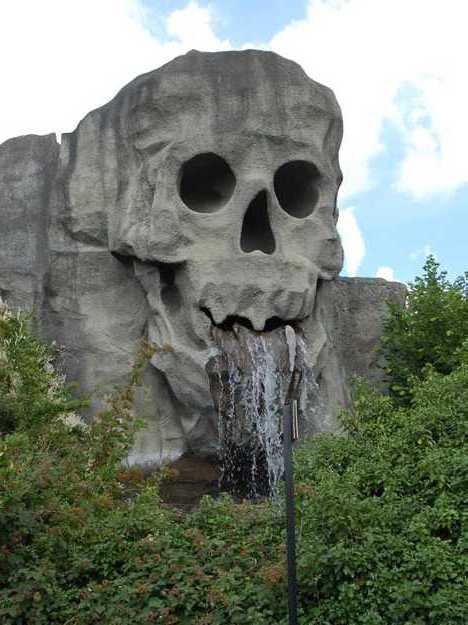 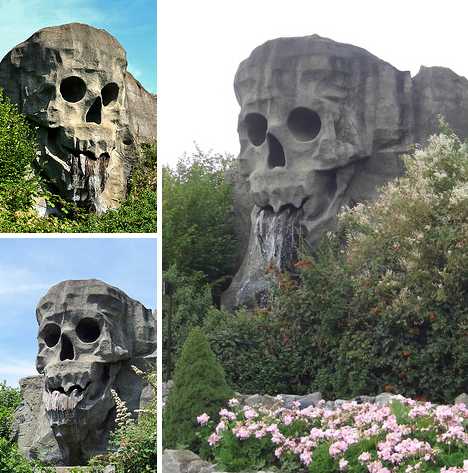 Phantasialand, located in Brühl, North Rhine-Westphalia, opened in 1967 and is one of Germany’s largest theme parks attracting around 2 million visitors annually. The park includes one of the most spectacular large skulls found anywhere – and its awesomeness is helped by its isolation from other man-made distractions. 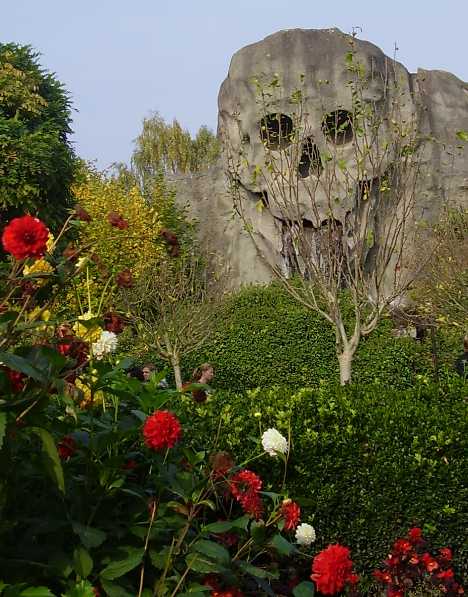 You can find the skull rock behind the Arabian Nights Gondola Ride as it forms part of the ride’s exterior wall. The lushly landscaped area around Der Totenschädel makes a great place to enjoy an outdoor picnic. 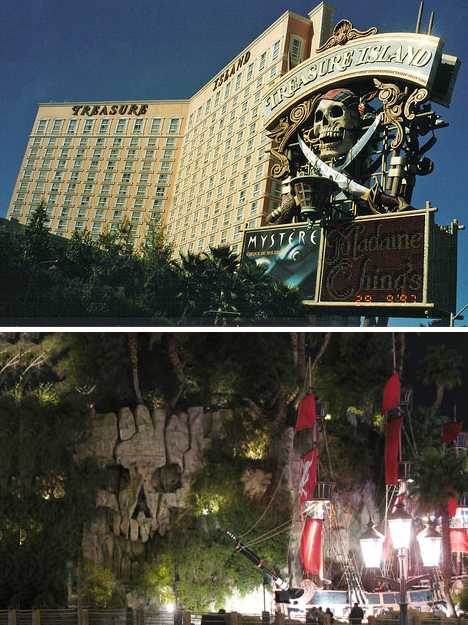 (images via: Flickriver/Rosa71uk and My Real Vegas)

Las Vegas’ Treasure Island Hotel was a more kid-friendly place to stay in the late 1990s, mainly due to the sprawling Pirate Village of Buccaneer Bay complex built right out front. The outstanding feature of the faux pirate’s cove was an ominous skull that leered out from a plaster & concrete wall. Night lighting gave the eerie visage an extra-gothic glow. 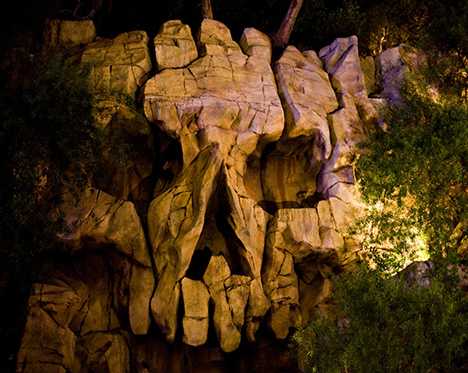 In 2003, Buccaneer Bay matured into “Sirens’ Cove”, along with the hotel distancing itself somewhat from the pirate theme with its new “TI” nameplate. Luckily, the skull wall survived the transition – adults like to get scared a little too, amiright? 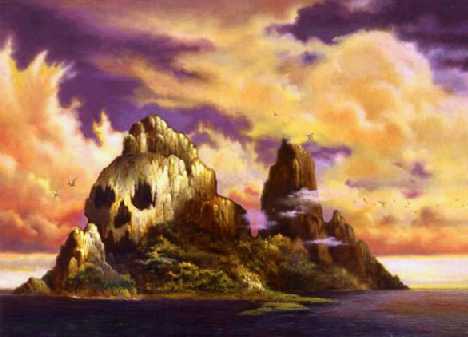 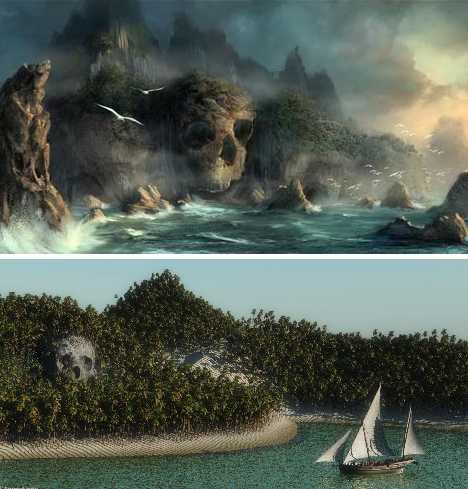 Mythical Skull Island, home of King Kong and any number of angry, toothy dinosaurs, has been represented a number of ways since the franchise first came down from the trees in the 1930s. The greatest of great ape’s stomping grounds have even made the jump to video games, in King Kong Skull Island Adventure. 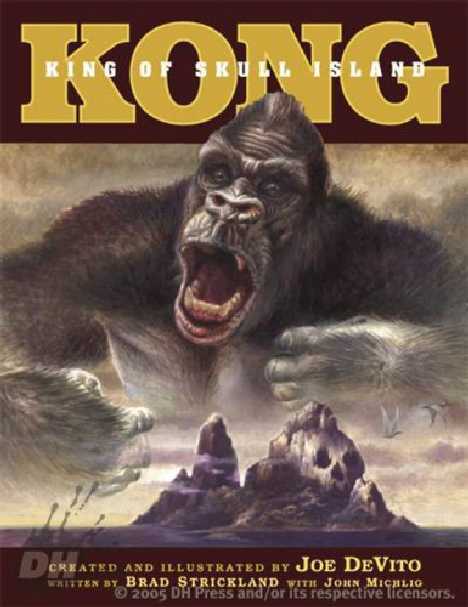 (image via: Every Picture Tells A Story)

“Kong, King of Skull Island”… really, whose going to argue the point? And if you think about it, where else would one expect the gargantuan gorilla to live – Candy Apple Island? 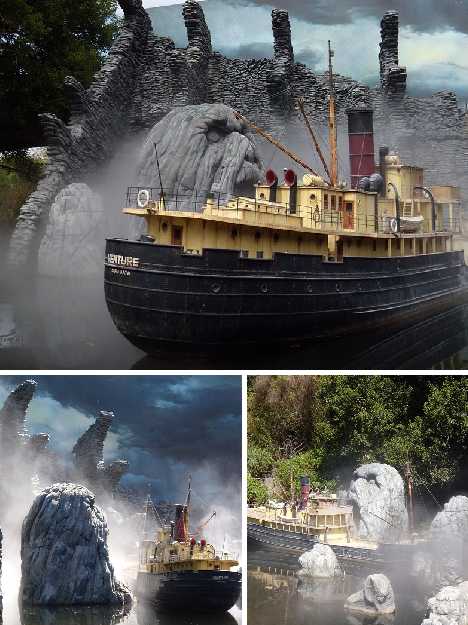 One of the most striking modern-day attractions based on King Kong’s Skull Island can be found on the Studio Tour at Universal Studios Hollywood. Visitors can view the actual model of the 1930s SS Venture ship that appeared in Peter Jackson’s 2005 King Kong remake. 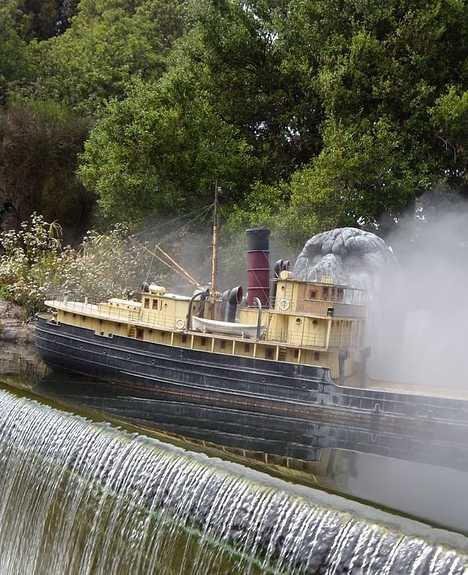 The movie was shot in New Zealand to take advantage of the country’s awe-inspiring scenery (LOTR fans will agree). Upon completion of filming, the models of both the SS Venture and Skull Island were disassembled, shipped to California, and set up again on the Universal Studios backlot. 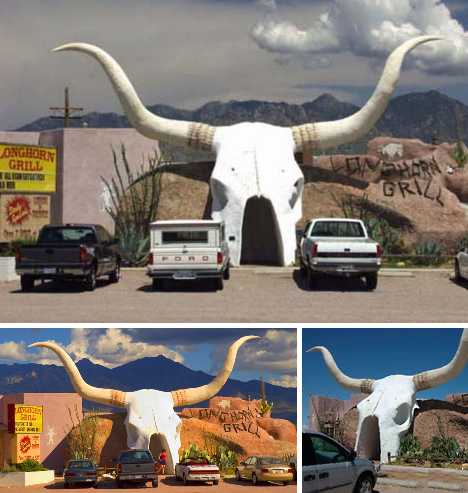 Ahh, the sweet, succulent scent of sizzling beef hot off the grill… how does one improve on that? Simple: serve it inside an enormous Longhorn Steer skull! That’s exactly what the Longhorn Bar & Grill does, and the Amado, AZ (near Tucson) landmark has been serving up steaks with style since the mid-1970s. 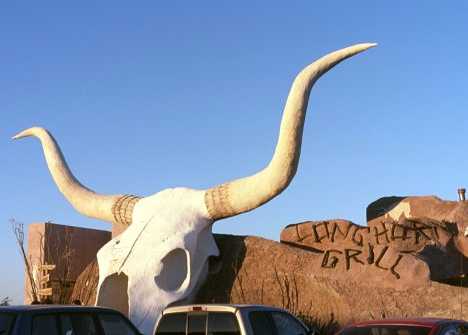 According to Roadside America, directions to the Longhorn Bar & Grill are as follows: “Take I-19 until exit 48. Drive west on Arivaca Rd., then immediately turn right onto S. Nogales Hwy. The big skull will be on the right.” You can’t miss it… in more ways than one! 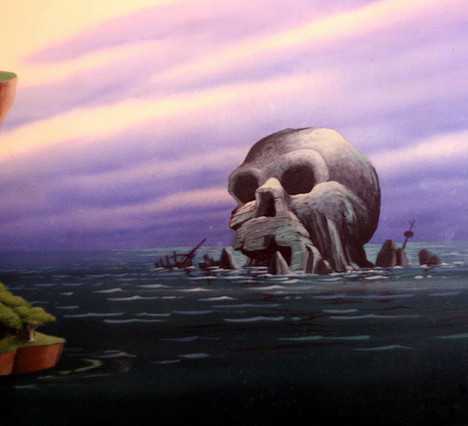 If you’re up to some skullduggery, you’ve come to the right place… to 10 right places, actually. These supersized skulls add a little dash of Goth to your travels, so be sure to bone up on your tibia, er, trivia before planning your next vacation.