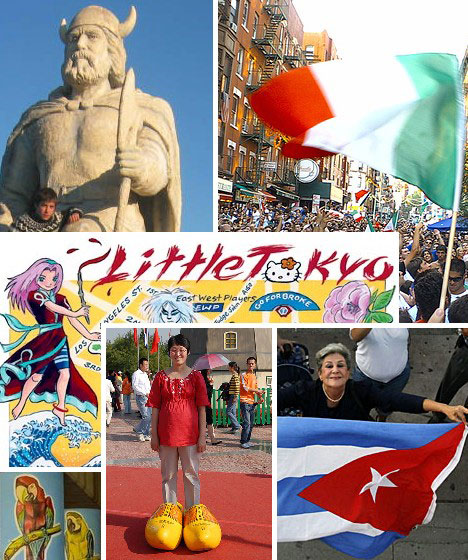 Chinatown, Little Italy… you name the country and it probably has a “little” chip off the block somewhere else. These ethnic enclaves haven’t always had a happy origin but today they serve as showcases for their mother countries’ foods, goods and above all culture. Here are 12 of the world’s most interesting and occasionally unexpected ethnic enclaves. 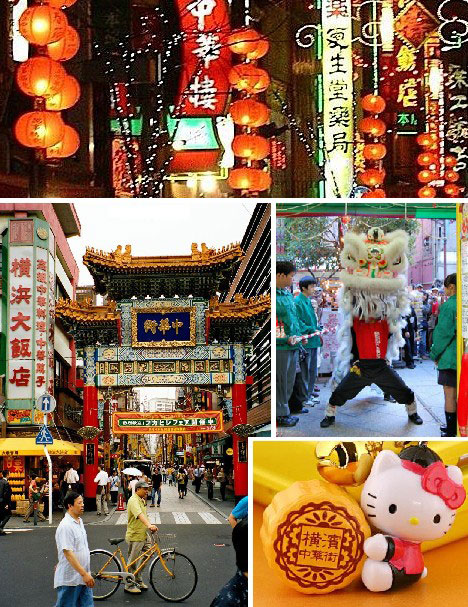 (images via: I-Guide, The Japan Times and Strapya World)

Chinatowns are perhaps the most common ethnic enclaves, historically distinctive due to both xenophobia of the host country and the insularity of Chinese culture. Even Asian nations have Chinatowns with one of the oldest, largest and most well known being located in Yokohama, Japan, just outside Tokyo. Boasting over 200 restaurants and 150 years of history, Yokohama’s Chinatown is a must-see destination for anyone visiting Japan. 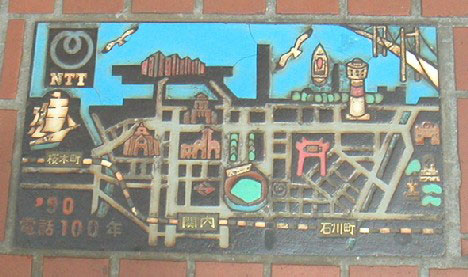 NTT (Nippon Telephone & Telegraph) installed the beautiful utility cover shown above in Yokohama in 1990 to commemorate a century of telephone service. While not to exact scale, the cover gives a rough bird’s eye view of Yokohama including its celebrated Chinatown. 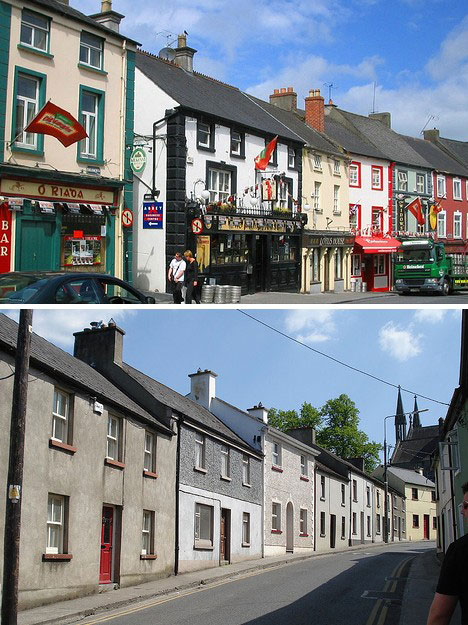 Wait a minute… an “Irishtown” in Ireland? In fact, there are no less than five Irishtowns located in Irish cities including Athlone, Clonmel, Dublin, Kilkenny and Limerick. These enclaves were established in the 15th century by English authorities who sought to keep control over Irish cities by expelling the Gaelic natives beyond city walls. The people set up ethnically Irish communities on the fringes of the cities out of economic interest. Above are views of Irishtown in Kilkenny. 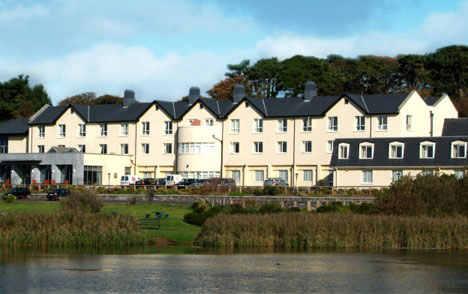 The Irishtown Bottleworks Apartments in Dublin (above) illustrate the continuing vitality of Dublin’s Irishtown which is, like the rest of Ireland, open to all and sundry regardless of ethnic origin. 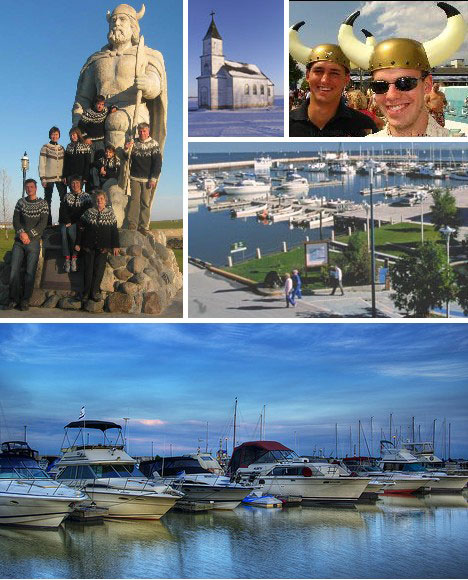 The town of Gimli, Manitoba, was founded by Icelandic settlers in 1875 and was named after Gimlé, heaven in Norse mythology… not the Lord Of The Rings character. Located about 45 miles north of Winnipeg, Gimli and the surrounding area is home to the largest concentration of people of Icelandic descent outside Iceland itself and is colloquially called New Iceland. A curious fact about Gimli is that it’s where Crown Royal whiskey – the largest selling Canadian whiskey in the USA – is made. 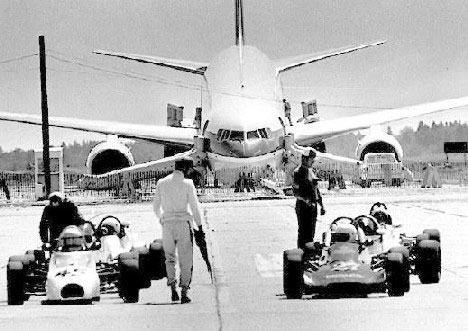 Gimli’s main claim to fame is that it’s where the so-called Gimli Glider landed. On July 23, 1983, an Air Canada Boeing 767 jet ran out of fuel at 28,000 feet as a result of a botched metric conversion. In an astonishing feat of airmanship, the pilot glided the huge jet to an un-powered, nose-scraping landing on a disused runway at tiny Gimli Airport (a former RCAF air base), saving the lives of all 69 people aboard. Did I say disused? Well, mostly – there was a go-kart race going on at the time. 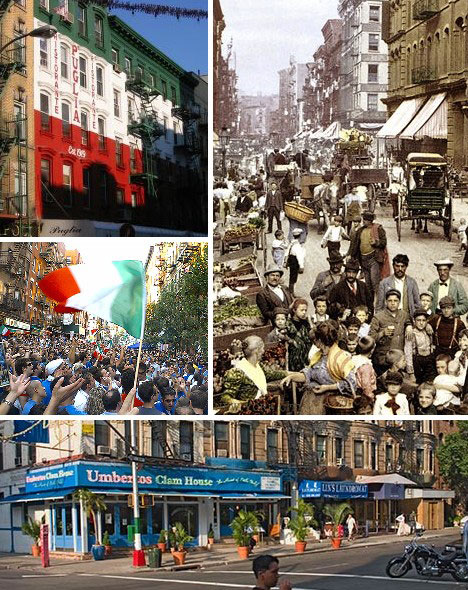 There are dozens, perhaps hundreds of Little Italys scattered across the globe like pepperoni on an extra-large pizza but one of the most famous is the one in New York’s lower Manhattan area. It even has its own website. 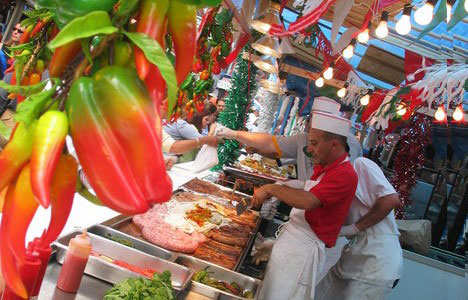 Straddling Mulberry street, Little Italy is a popular tourist attraction, especially every September when the 11-day long Feast of San Gennaro turns the area into a showcase of Italian food, fun and flavor. 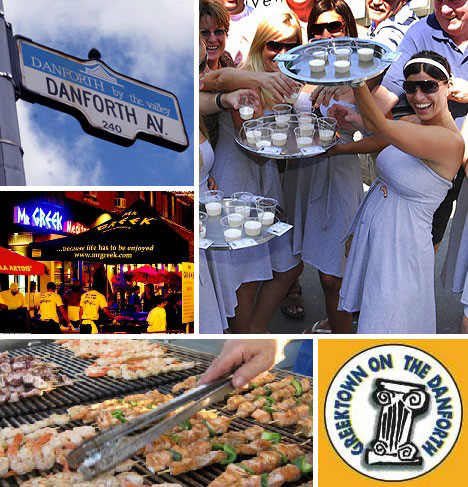 (images via: Dine T.O. and Peterstereoscopy)

Canada is one of the world’s most multicultural countries and in contrast to the American tradition of the “melting pot”, ethnicity is encouraged. A prime example is Toronto’s Greektown, one of (if not THE) largest Greektown in North America. A long strip of Danforth Avenue retains period architecture dating back to the early years of the 20th century, along with its high concentration of Greek immigrants and those of succeeding generations who still live and work in the area. 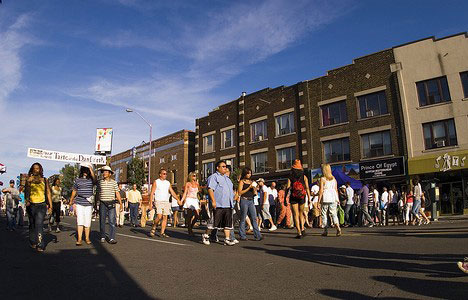 Since 1994, the city of Toronto has closed Danforth Avenue to vehicular traffic for the August weekend Taste of The Danforth food and music festival which in 2008 attracted over 1 million visitors. The 2009 festival takes place from August 7 through 9. 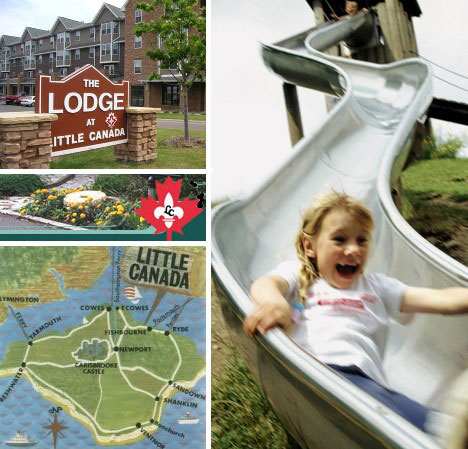 Turnabout is fair play and Little Canada, Minnesota, is a prime example. Little Canada traces its history back to 1844 when French-Canadian Benjamin Gervais established a grist mill on the shores of a lake which now bears his last name. Little Canada was formally designated a village in 1953 and was incorporated as a city in 1974 in an effort to maintain the community’s identity in the face of suburban sprawl from the Twin Cities. 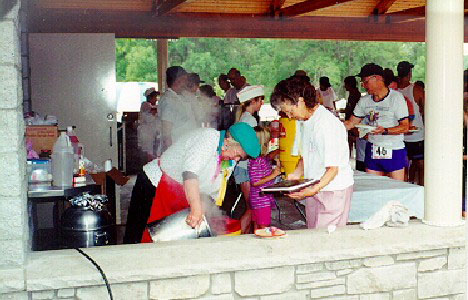 Little Canada hosts the annual Canadian Days celebration every August in association with its sister city of Thunder Bay, Ontario.

Though the Los Angeles district known for many decades as Little Tokyo now boasts a significant non-Japanese Asian presence, it remains an important center of Japanese-American culture and one of only three official Japantowns in the United States. 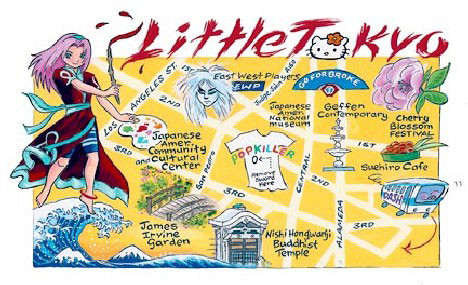 The Second World War internment of Japanese-Americans caused a temporary disruption to Little Tokyo; post-war resettlement soon returned the district to its historic vibrancy. Popular tourist attractions include the annual Cherry Blossom Festival in April and the Nisei Week celebrations that take place every August. 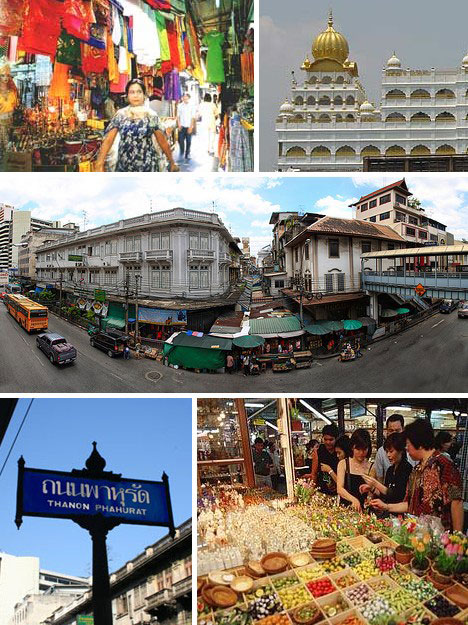 Bangkok’s “Little India” can trace its roots to the early 20th century when Indian textile merchants set up shop, found success and invited friends & family to join them. Phahurat is known today as THE place to go in Bangkok for low cost, high quality silk and cashmere goods. The area also features many beautiful and ornate Sikh and Hindu temples. Bonus: Phahurat sits adjacent to Bangkok’s Chinatown, meaning a savvy visitor can hit two cool ethnic enclaves in a single – but tiring – day. 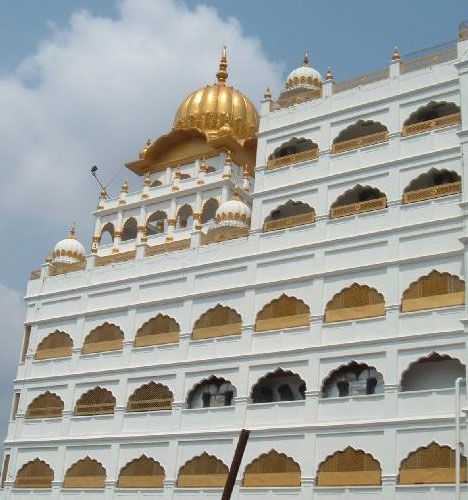 The magnificent Sri Guru Singh Sabha Temple was first erected in 1932 and was substantially renovated over the decades since. In the Sikh spirit of compassion and humility, the temple offers assistance to the destitute and serves free meals daily. 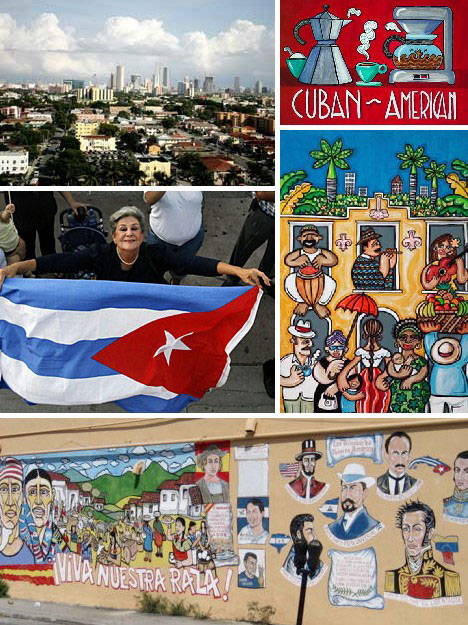 Known as La Pequeña Havana to residents, this bright and colorful enclave is a loud, proud offshoot of Mama Cuba that has bloomed thanks to beneficial conditions in the land of freedom and opportunity. Little Havana has a population of roughly 50,000 and the neighborhood has Miami’s highest population density due to the preponderance of apartments. 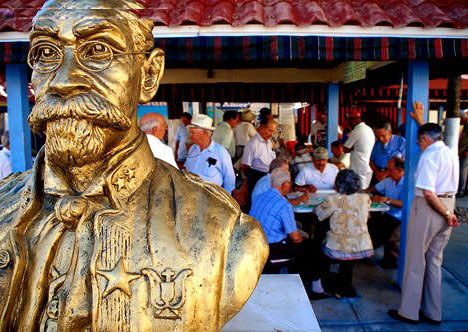 (image via: World Of Stock)

Though it offers a wealth of exciting diversions for visitors like the annual Calle Ocho Annual Multi Cultural Festival, perhaps the most idyllic image of Little Havana are the dedicated chess and domino players at Domino Park. 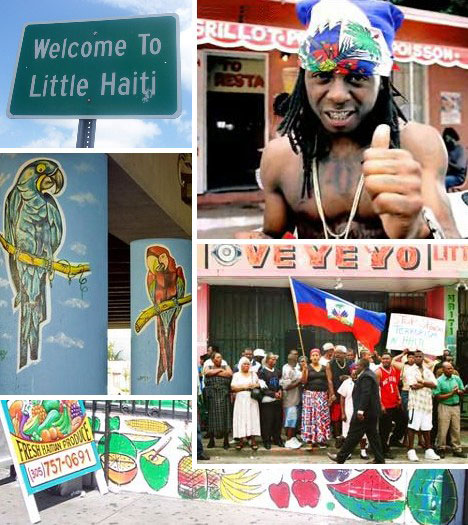 Overshadowed by Little Havana, Miami’s “La Petite Haiti” is roughly 40 percent smaller and lacks the family-friendly festive vibe of its hispanic neighbor. The area’s reputation had sunk so low, in fact, that it was used as a virtual locale for Grand Theft Auto: Vice City. Lately though, the enclave has begun a revival based on its proximity to the Miami Design District and the allure of the recently constructed Edgewater community. Many of the Haitian immigrants who built Little Haiti into the southeast’s center for Haitian and francophone culture have left but much traditional flavor remains. 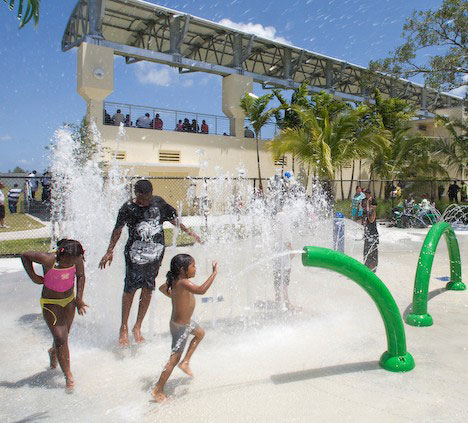 One highlight of Little Haiti’s renaissance is the Little Haiti Park Soccer Field & Recreation Center opened in May of 2008. Facilities include two new soccer fields with bleachers, a playground, a domino park, picnic areas, and a splash park with an associated field house. 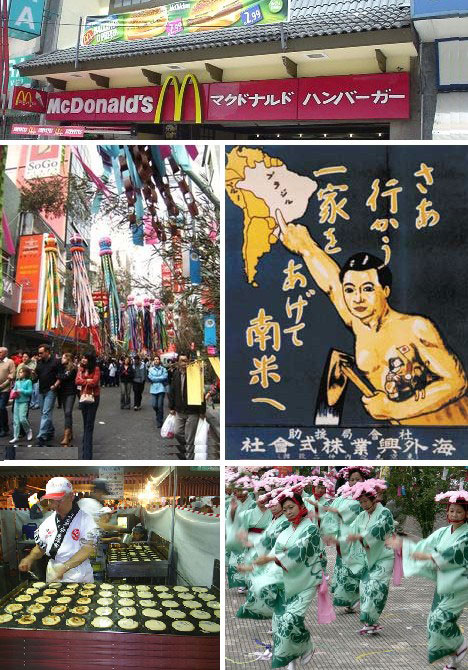 Japanese emigration to Brazil began in 1908 when 790 migrants boarded the Kasato Maru in Kobe harbor. Today 1.3 million people of Japanese ancestry live in Brazil, mainly concentrated in the southern states of Paraná and Sao Paulo. Liberdade, a thriving neighborhood in Sao Paulo, is the center of Japanese culture in the country 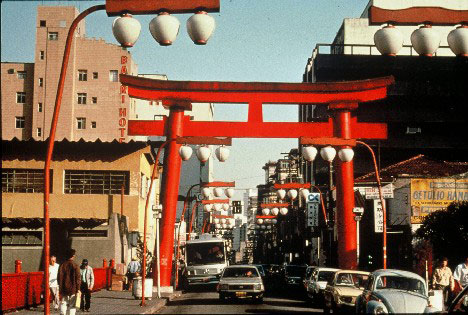 Since 1974 the point where Rua Galvão Bueno enters Sao Paulo’s Liberdade neighborhood has been graced by a singular landmark: a 29.5 foot tall Torii gate painted brilliant crimson in the traditional Japanese manner. 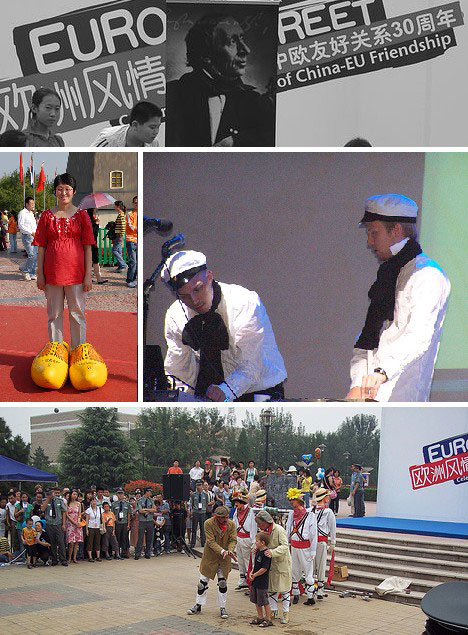 Perhaps the world’s most bizarre ethnic enclave is Europe Street, located near Beijing’s Chaoyang Park. No actual Europeans live on Europe Street – it’s a Potemkin Village of sorts, meant to inform and entertain native Chinese on the odd customs and costumes of those exotic Europeans. 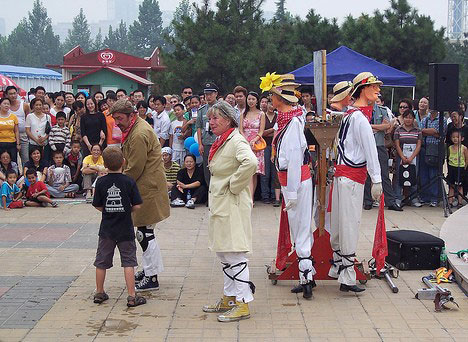 Visitors to Europe Street are regaled with readings from selected European fairy tales so as to get a better understanding of the continent’s culture. Nine EU nations are represented in Europe Street, often by evoking some of the more predictable stereotypes – Dutch wooden shoes anyone?

Europe Street reminds us that ethnic enclaves aren’t always as authentic as they seem. As always, consider the source: even long-established “Little Towns” evolve after their residents are separated from the mother country. To really experience another nation’s culture you’ve got to make the trip but in these ethnic enclaves one can still find excitement at home that’s not homegrown.