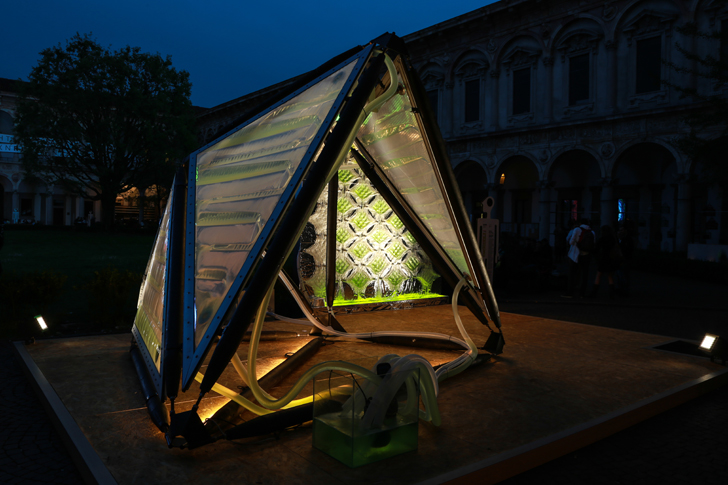 Generating as much oxygen per day as 400,000 square feet of natural woodland, the Urban Algae Canopy combines architecture, biology and digital technology to create a structure that generates energy, responds to and enhances its environment. 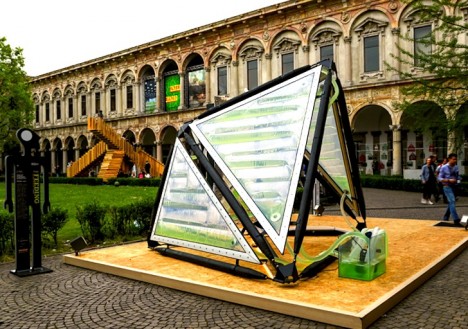 Created by EcoLogics Studio and demonstrated in Milan, Italy, this “world’s first bio-digital canopy integrates micro-algal cultures and real time digital cultivation protocols on a unique architectural system,” with flows of water and energy regulated by weather patterns and visitor usage. Sun increases photosynthesis, for example, causing the structure to generate organic shade in realtime. In addition to CO2 reduction, the canopy as a whole can produce over 300 pounds of biomass daily, all through a relatively passive system that requires far less space and upkeep than conventional civic greenery. 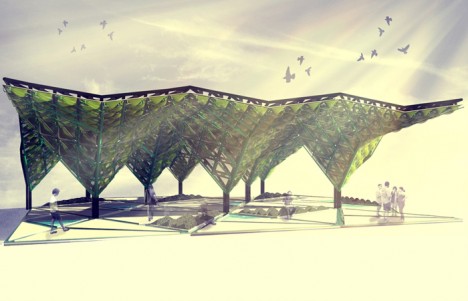 A hybrid of architectural and ecosystem design, the canopy is made to adapt its features based on manual as well as environmental inputs, letting users exert control (via a digital interface) within a larger dynamic system. “This process is driven by the biology of mico-algae is inherently responsive and adaptive; visitors will benefit from this natural shading property while being able to influence it in real-time.”

For EcoLogics, this is only a step toward a larger vision – organic systems tied to high-tech ones in current and future buildings and infrastructure, as well as a breakdown of the differentiation between urban and rural, cities and nature. Indeed, the Canopy is just the latest of many projects the EcoLogics team has executed around similar themes, though it combines a series of construction techniques and materials they have been developing: “The exceptional properties of microalgae organisms  are enhanced by their cultivation within a custom designed 3 layers ETFE cladding system. A special CNC welding technology is at the core of it and enables ecoLogicStudio to design and control the morphology of the cushions under stress as well as the fluid dynamic behaviour of the water medium as it travels through it.” 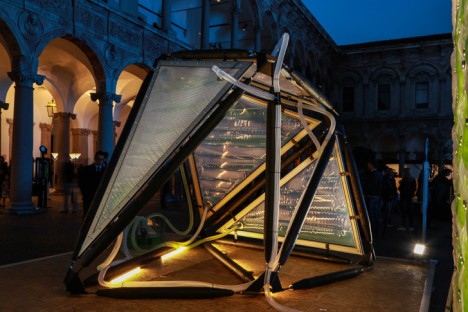 Integrating organic and artificial systems opens up sustainable possibilities for everything from temperature control to power generation methods using advantages of both natural and digital parts. It is also conceivable that the organic inputs and outputs of such systems could eventually be integrated into the production cycle of urban vertical farms. For now, the canopy will remain a working prototype and proof of concept as well as a chance to experiment with refining the constituent technologies. Meanwhile, others are taking different approaches to the use of algae in urban objects, including a design for smog-eating algae street lamps and this bio-voltaic table. 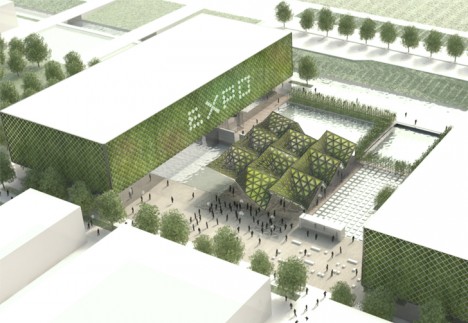 More from its creators: “In ecoLogicStudio we believe that it is now time to overcome the segregation between technology and nature typical of the mechanical age, to embrace a systemic understanding of architecture. In this prototype the boundaries between the material, spatial and technological dimensions have been carefully articulated to achieve efficiency, resilience and beauty.” For an active application on a permanent building exterior with additional scientific details, be sure to take a look at the world’s first bio-adaptive facade in Germany.