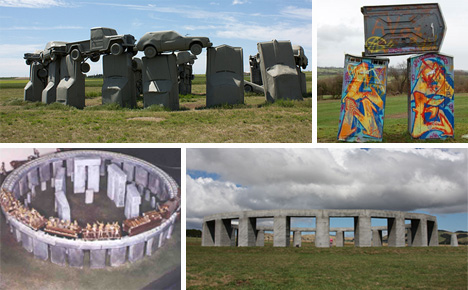 Stonehenge, the historic and mysterious monument on the Salisbury Plain in England, has intrigued humans for centuries. While no one is really sure what it was used for or how it was built, one thing we can all agree on is that it’s an incredible feat of ancient engineering. Over the centuries, a curious phenomenon has developed: Stonehenge replicas have popped up all over the world. 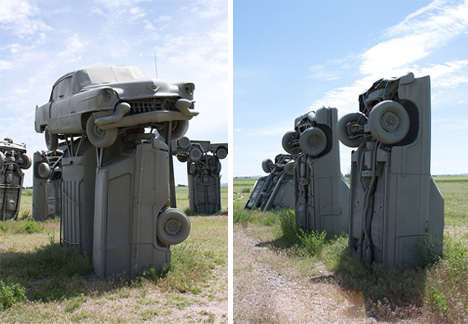 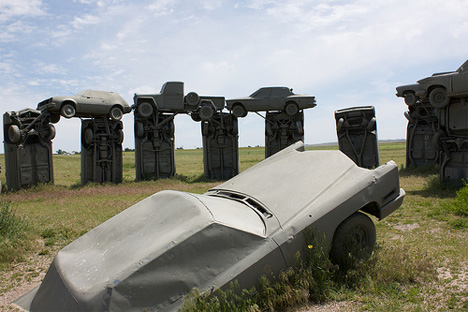 Carhenge, located in Alliance, Nebraska, is a well-known Stonehenge replica made entirely of old cars. Artist Jim Reinders was inspired by visiting the original Stonehenge; upon arriving home, he was assisted by family and friends in his desire to construct a replica. The monument is a memorial to Reinders’ father and was first dedicated on the Summer Solstice in 1987.  Today the site is owned and maintained by Friends of Carhenge, a local group formed to preserve the monument. 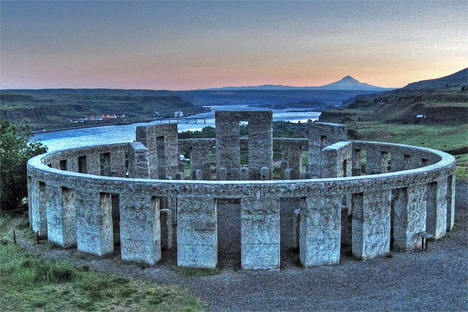 The Stonehenge replica in Maryhill, Washington began with a misunderstanding, but remains one of the most poignant and memorable of all of the modern replicas. Envisioned and constructed by Sam Hill, a Washington railroad executive, the monument was begun when Hill was told that Stonehenge was used for ritual sacrifices. Though this is not true, it inspired Hill. He built his Stonehenge as a tribute to those who lost their lives in World War I; an eternal reminder that “humanity is still being sacrificed to the God of war.” 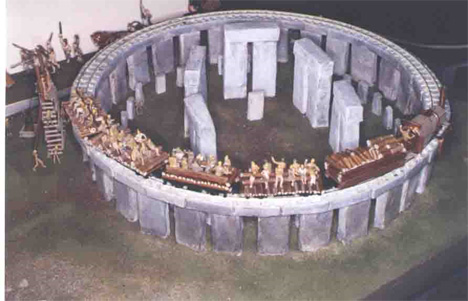 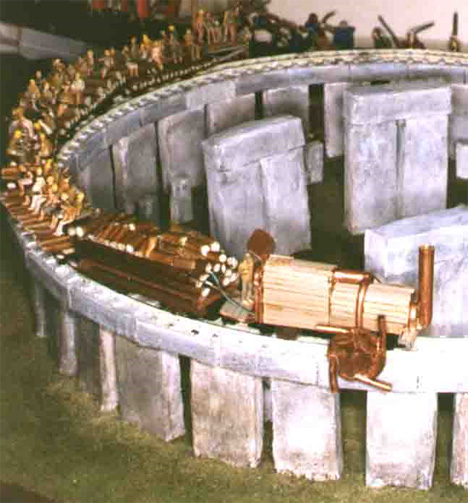 There are plenty of bizarre things to be found in luggage, but you probably never though you’d see a train on top of Stonehenge packed into a suitcase. This replica-in-a-case is one example of how creativity and imagination can add an unexpected element to a well-explored subject. Built for a convention to promote British Steam Preservation railways, this Stonehenge featured a small train running a circle on top of the stones. After the convention it was auctioned off to a train shop in Austin, Texas, where it may still reside to this day. 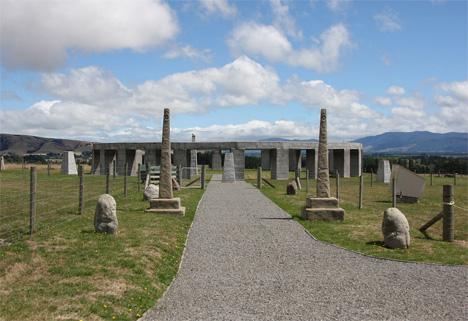 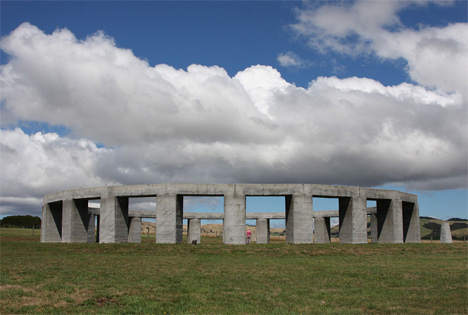 Stonehenge Aotearoa is a monument built on the same scale as Stonehenge, but of different materials and for a very different purpose: to teach modern people how ancient civilizations used such structures. This noble undertaking began in 2003 and was completed two years later. Since then, the site has been continuously added on to and improved. This modern interpretation of Stonehenge is used as an open-air observatory and a hands-on tool for learning ancient methods of identifying and recording the passage of time and seasons.

This item isn’t technically a Stonehenge replica (yet), but it deserves to be included nonetheless. Michigan carpenter Wally Wallington has spent years figuring out the technology that Stonehenge builders may have used to erect the massive stones. He has constructed the beginning stages of his very own Stonehenge replica and has plans to erect a full replica at some point. 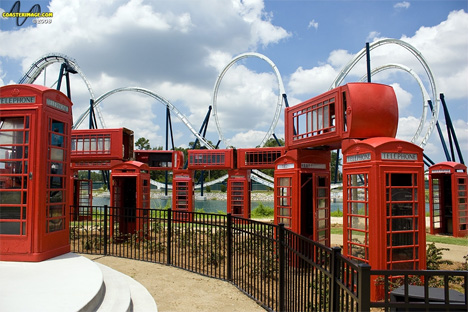 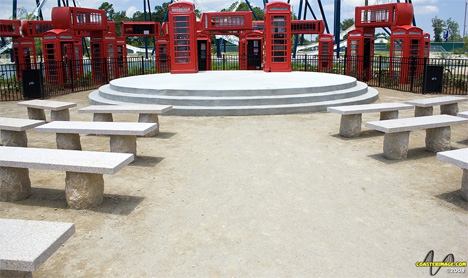 This completely fabulous Stonehenge replica, playfully named Phonehenge, sits in the Freestyle Music Park (formerly the Hard Rock Park) in Myrtle Beach, South Carolina. It surrounds a large performance space in the British Invasion section of the park and is comprised of lots of red old-style British telephone boxes.

This temporary Doorhenge is certainly one of the most entertaining replicas on this list. Built by a group of SFZero players, it went up in a matter of 6 hours. The goal was to install a door in a public space, but these ambitious players took it a step further and built a whole Doorhenge. The monument started with a great deal of planning, testing of compatible doors, and painting. All of the doors were then hauled to the location and assembled. The group no sooner completed their monument than they were approached by a policeman who discouraged participating in Doorhenge-related activities without first obtaining a permit. 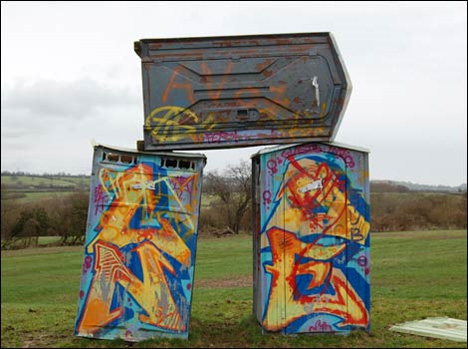 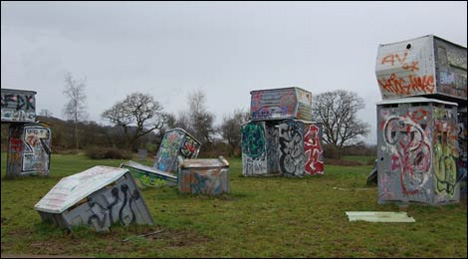 Banksy is known for some pretty incredible stunts, but his Loohenge at 2007’s Glastonbury Festival was unexpected and a little more shocking than usual. Most of the shock value came from the placement of the installation: Banksy chose to locate it in the sacred space of the field which is ordinarily deemed a plastic-free zone. Since the portable toilets he used were made entirely of plastic, some festival-goers felt that Banksy was mocking or degrading their beliefs. Somewhat ironically, Banksy’s installation was covered in graffiti by the end of the festival. 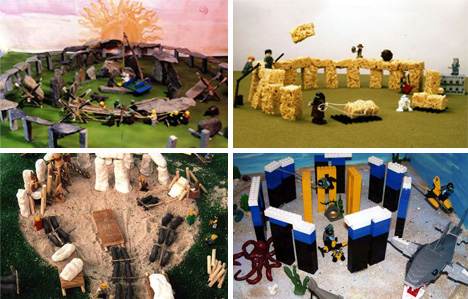 In the Summer of 2008, Lego sponsored a Stonehenge replica contest for kids. The entries were widely varied and made of all types of materials: from dog treats to cereal to chocolate to real rocks. And one or two even involved Legos! The endless creativity of kids was evident in the many interpretations of the ancient monument. 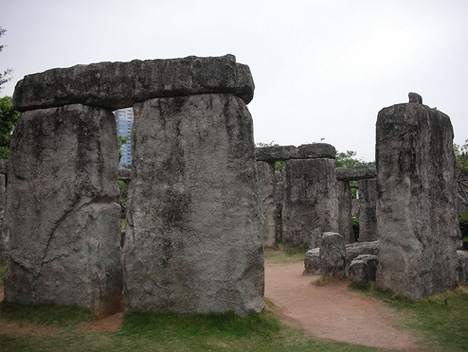 In the tradition of entertaining yet slightly over-the-top amusement parks, Window of the World in Shenzhen, China offers an assortment of worldly delights. There are sections for most regions of the world, all containing replicas of the regions’ most impressive monuments and features. The Stonehenge replica in the park’s Europe section is a faithful representation of the aged rocks, though with one notable improvement: you’re allowed to touch these rocks. 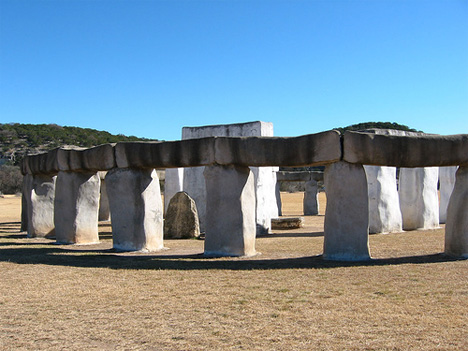 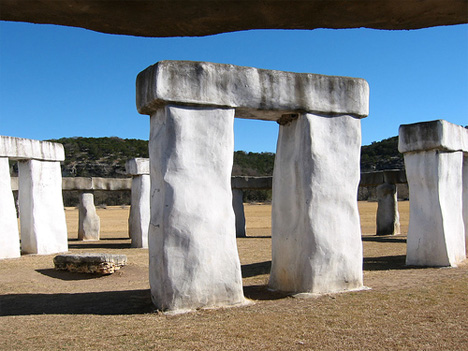 The biggest ideas often start off small and simple. Stonehenge II began as a discarded limestone slab offered from one neighbor to another. Doug Hill had recently redone his patio and found himself with the unneeded slab, so decided to see if his neighbor Al Shepperd had a use for it. Shepperd erected the slab, monument-style, in his yard. Over time he began to wonder if it was visible from the road. So, naturally, he added on to the single slab to make it more of a spectacle for passers-by. Over the next year, the two men worked together to create this impressive half-size replica of Stonehenge. Although Shepperd passed away in 1994, the monument still stands and is open for visitors. 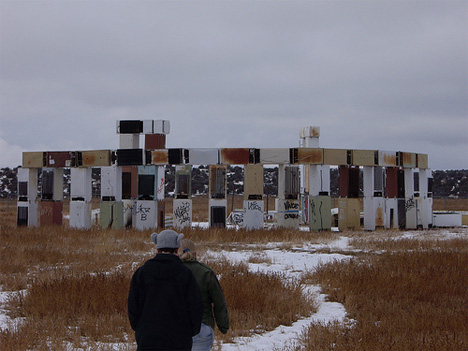 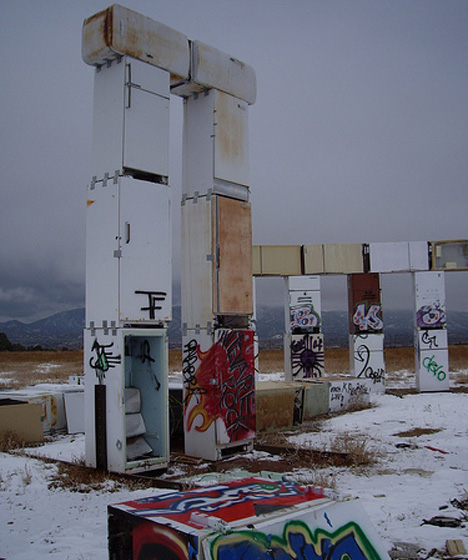 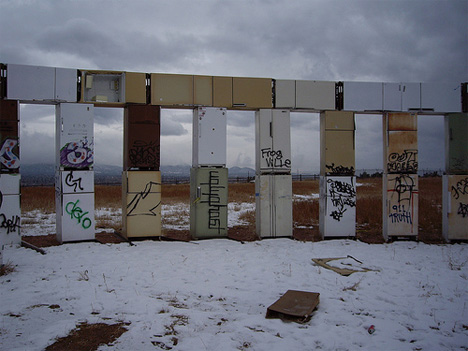 You wouldn’t normally think of old refrigerators as art or as ideal building materials, but Adam Jonas Horowitz and the Primordial Soup Company seemed to see both of those things in 2003.  Erected near Santa Fe, Fridgehenge (or Stonefridge) was at first a comment on American consumerism and wastefulness. More than 100 discarded refrigerators were arranged to resemble Stonehenge. Fridgehenge became a major tourist attraction, but eventually vandalism and the elements took their toll. The site was dismantled following complaints about the appearance and safety of the installation. 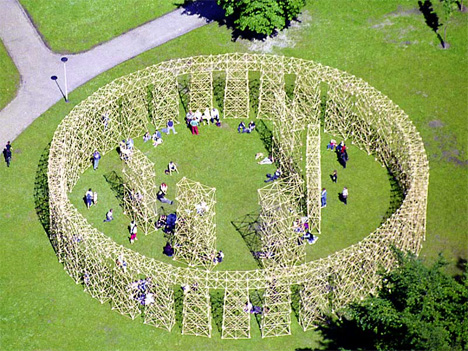 It may bear little resemblance to the original, but Bamboohenge, built for an arts festival in Rotterdam, was an impressive exercise in collective building. For the duration of the festival, Bamboohenge served as a sort of community space where participants could get together to socialize, share ideas and have fun. It was also meant to call to mind the way that we can continually learn from the past. 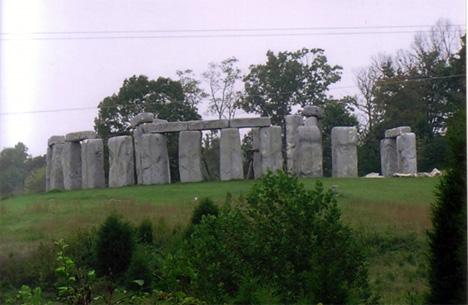 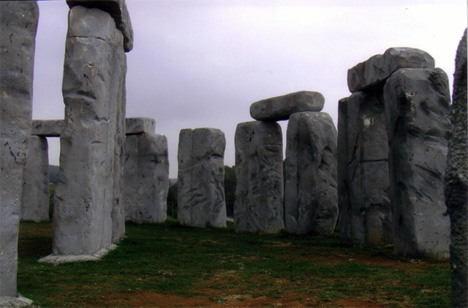 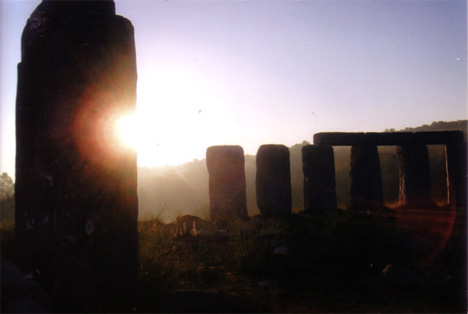 As arguably the most impressive of the full-scale Stonehenge replicas, Foamhenge sits on a hill in Virginia’s Blue Ridge Mountains. Its creator, Mark Cline, took less than two weeks to erect the impressively detailed Stonehenge copy. Each “stone” has been artifically aged through carving and creative painting. Their measurements were checked against those of the actual stones, and a local astronomy expert was called in to help align each piece correctly. Visiting Foamhenge is far cheaper and easier than traveling to Stonehenge for those of us in North America, though of course the sense of history and mysticism is decreased by the substitution of Styrofoam for bluestone. 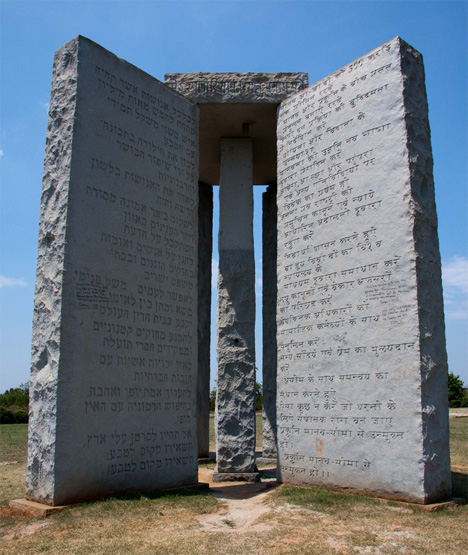 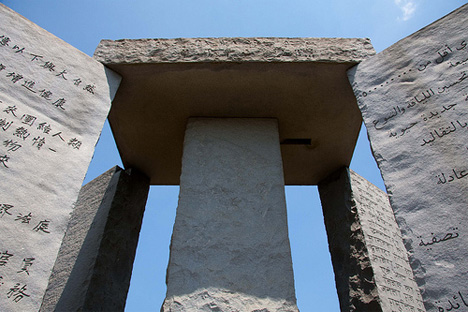 (images via: The Rocketeer)

While not technically a Stonehenge replica, the Georgia Guidestones are just as mysterious and shrouded in controversy as the original. Erected in 1980, the enigmatic patron who commissioned the monument has remained anonymous, known only by the pseudonym R. C. Christian. The message engraved on the Guidestones in eight languages consists of ten rules for running the Earth; it seems to be a New World Order-type set of guidelines involving greatly reducing the world’s population and forming a world government, among other things. 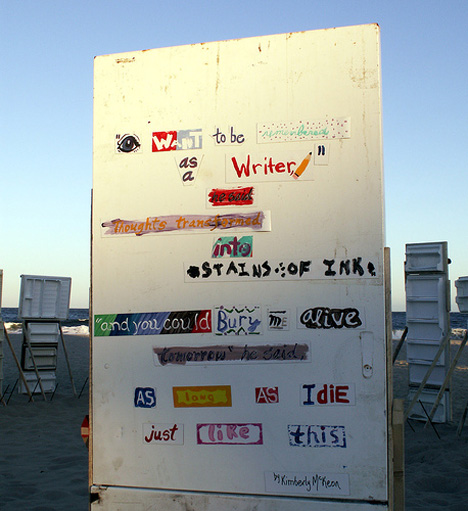 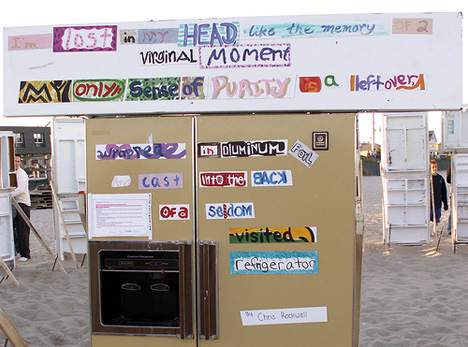 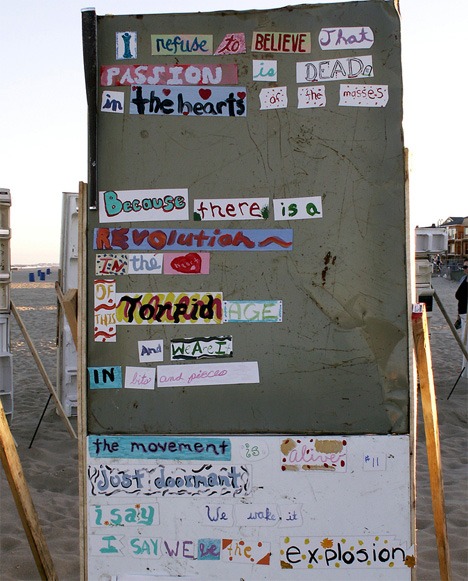 A two-day event in Belmar, New Jersey in 2005 saw some 36 discarded fridge doors erected in the sand and covered in poetry. Poemhenge was an event celebrating the Autumnal equinox. The poetry was provided by members of the Blue Collective, then the words were painted onto magnets by local artists and art students. Though it lasted only a short time, Poemhenge was a creative way to pay homage to one of the world’s most mysical monuments. 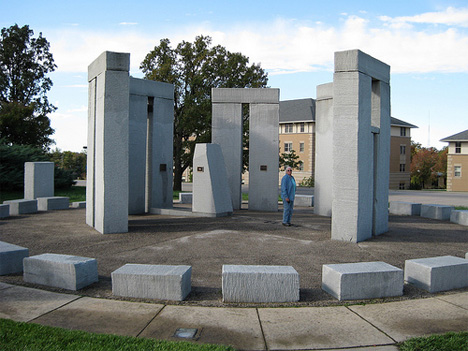 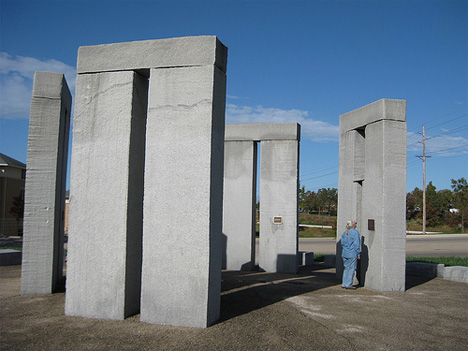 Dedicated on the Summer Solstice in 1984, this half-size Stonehenge replica at the Missouri University of Science and Technology (formerly University of Missouri-Rolla) is a salute to mankind’s ingenuity and technological development. Just like the real thing, it’s astronomically aligned so that the sun shines through the stones on the solstices and equinoxes. Unlike the original Stonehenge, this version includes a Polaris window for easy viewing of the North Star.