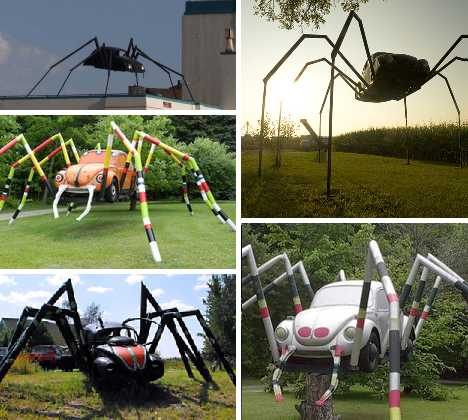 Spider Bug, Spider Bug, does whatever a Spider Bug does… wait a minute, just what exactly does a Spider Bug do?? Based on the spooky looks of these 15 long-leggedly Bug beasties made from metal pipes and recycled VW Beetles, we’re guessing anything they want! 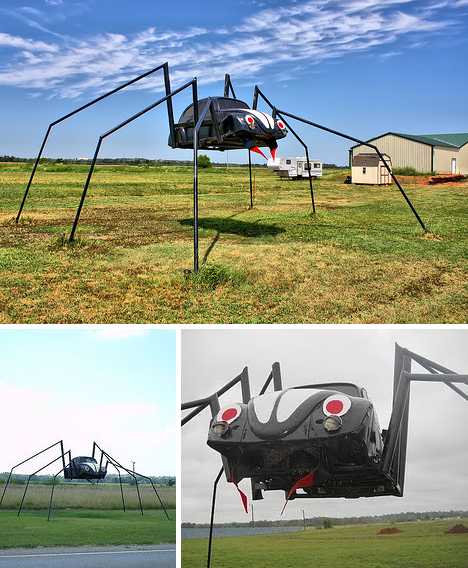 That’s no “visual distraction” just off Hwy 77 near Lexington, Oklahoma… well actually, it is, and a BIG one to boot! And so what if it only has six legs; you know what they say about wounded animals. Anyway, the story goes that the Spider Bug sculpture stands on the side lot of a VW graveyard and at one point in the past it overlooked a small auto racecourse that’s long since been reclaimed by weeds and scrub. 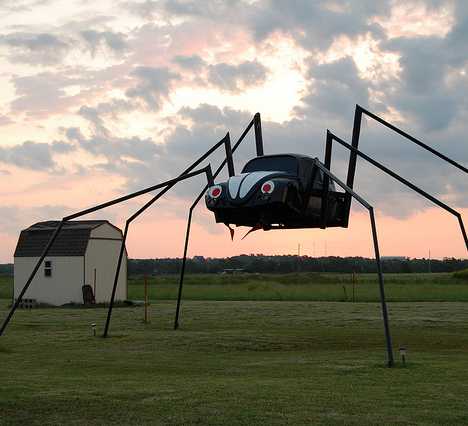 To whoever’s living in that house… GET OUT NOW! 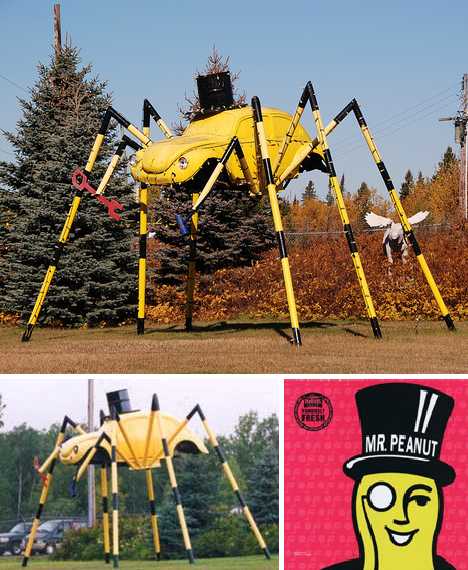 Travelers gazing out the car window towards the the north side of the Trans-Canada Highway a mile or two east of Kenora, Ontario, might feel a sudden urge to put the pedal to the metal, just in case the giant Spider Bug just off the tarmac happens to see them first. Then again, with its jaunty top hat and bold black & yellow paint job, the automotive arachnid bears more than a passing resemblance to Mister Peanut. 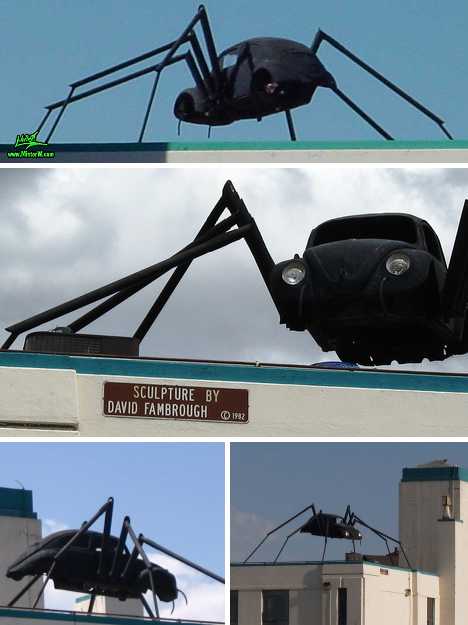 This David Fambrough masterpiece was originally located in downtown Reno, NV, on the roof of an old fire station that was upcycled as a homeless shelter. Oddly enough (or maybe not, if you’re from Reno), the sculpture was the city’s first piece of public art. In 2008, however, with the building sold and the new owners unwilling to maintain the rusting Spider Bug, the Reno Arts & Culture Commission voted to return the sculpture to Fambrough while recommending he offer it to Scudders VW Performance Specialists in nearby Sparks. 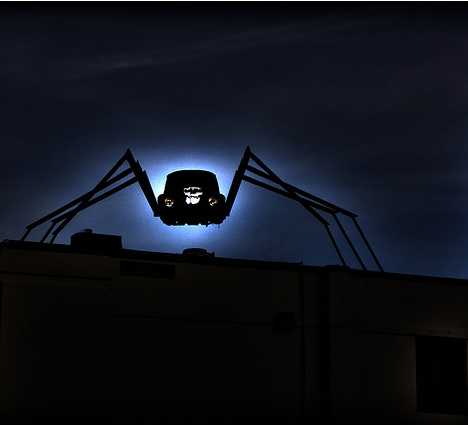 It seems there wasn’t a roof in Reno sturdy enough to bear the weight of the Spider Bug, and Scudders was ready and willing to do whatever restoration work was necessary to the circa-1979 sculpture. As for Fambough, he couldn’t be happier. “Putting this on top of your business…” he said, “talk about all the advertising in the world.” And also talk about War of the Worlds, which was the first thing I thought of when I found the above superbly spooky photo by Rob Simpson. 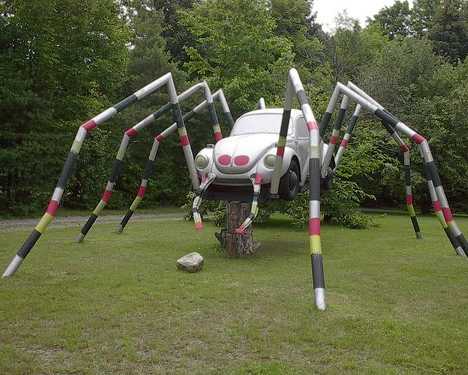 We’re not sure exactly where this tastefully painted Spider Bug is but there’s one thing you can count on: it knows where YOU are! 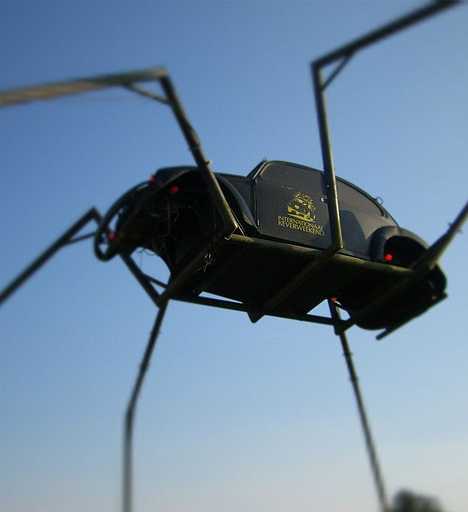 Tulips, wooden shoes, chocolate and… Spider Bugs? Add one more item to the Netherlands’ claim to fame as the above towering infernal was seen striding across the countryside near Gassel in North Brabant… probably attacking windmills and stuff. Now that’s no gouda. 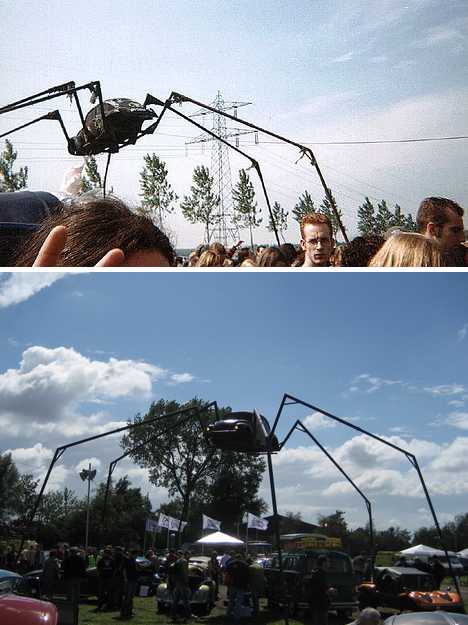 (images via: MonkeyIron and VW Vortex)

When reports first came in about giant spiders invading rock concerts and car shows in Holland, it was chalked up to the locals spending too much time in those infamous Amsterdam coffee houses. In fact, the Dutch Spider Bug does indeed exist, and was caught on film at the 1999 Dynamo Open Air music festival held near Eindhoven, the Netherlands. 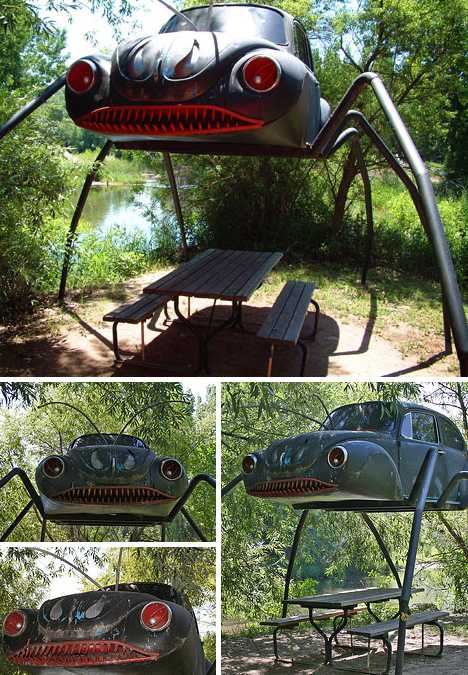 The Swetsville Zoo isn’t a “zoo” per se, unless one uses their imagination a bit. Created over a roughly ten-year span (1985-95) by former farmer Bill Swets, the Fort Collins, CO landmark features a mirthful metal menagerie built by Swets from old auto parts, disused farm machinery and scrap metal. 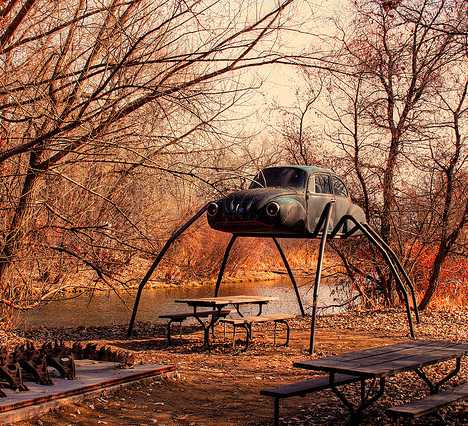 The zoo’s resident Spider Bug conveniently shelters a picnic table, because if there’s anywhere you want to enjoy lunch with your family & friends it’s beneath the belly of a giant spider… amiright? 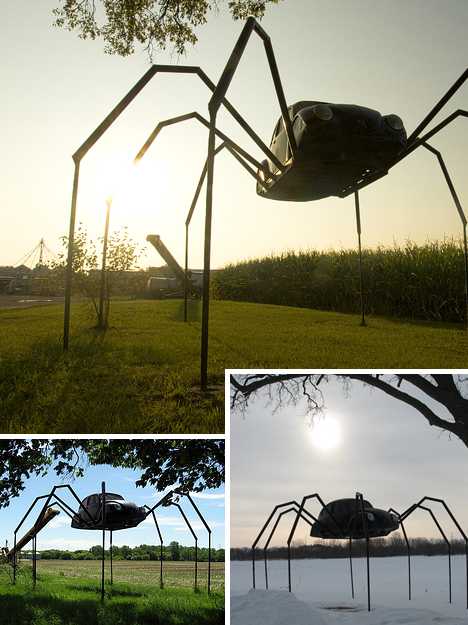 According to Phyllis Bruce, this is a giant spider made of a Volkswagen body near Avoca, Iowa, “is just sitting on this lot for no apparent reason!” Not apparent to YOU, my dear Phyllis, but just wait until sundown… actually, get the heck outta there! 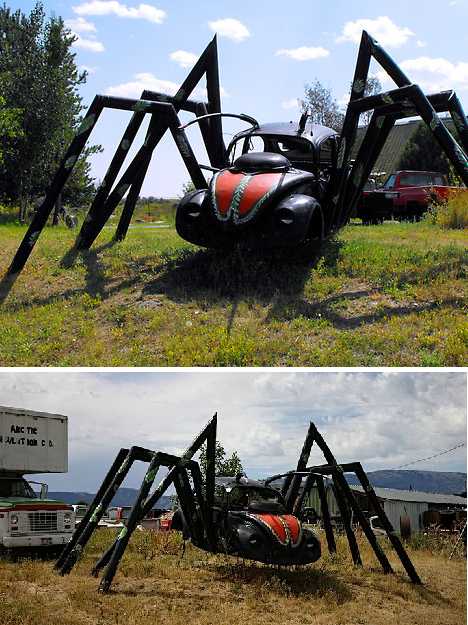 Idaho’s famous for potatoes, Napoleon Dynamite, and now this tastefully trimmed Spider Bug! The unattributed artist seems to be channeling a little Black Widow, though we only can wish it was little. You’ll find this ominous static sculpture guarding a salvage yard near Grace, Idaho. Gosh!! 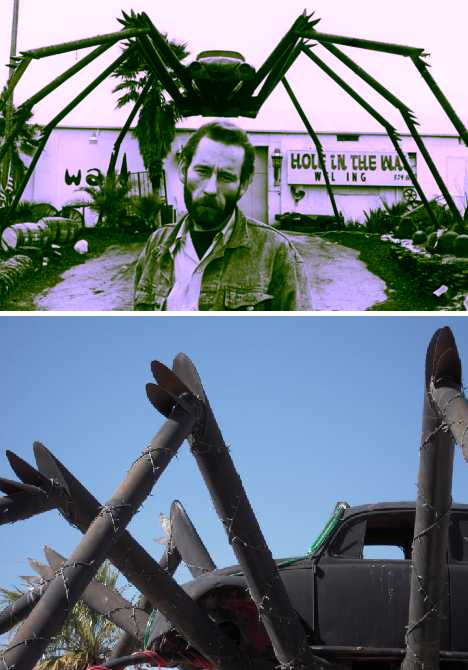 Most homeowners know that if you see a spider in hour house, it probably got in through a hole in the wall. Such is the case with giant spiders as well, at least it is with this spiky Spider Bug spied in front of the “Hole In The Wall Welding“, a former VW repair shop in North Palm Springs, California. Visitors are advised to be on the lookout for giant mice. 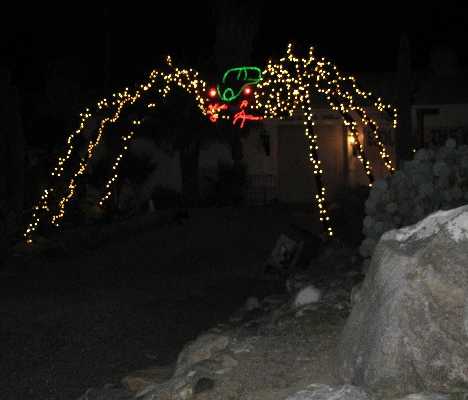 Well, now we know why Santa doesn’t use reindeer to pull his sleigh anymore… you can guess what happened to the reindeer (burp). 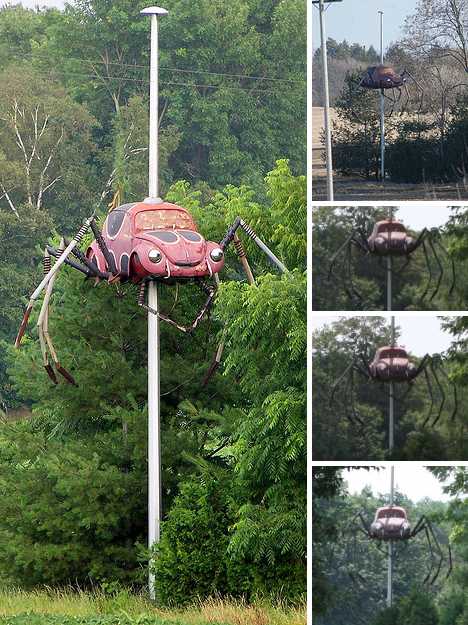 (images via: Will S, K & GM and Celtic Connexions)

The picturesque berg of Port Hope, Ontario, is famed for its hospitality towards visitors… except for car-sized, bug-eyed varmints who get impaled on 20-foot steel poles. Hey, it’s a tradition. 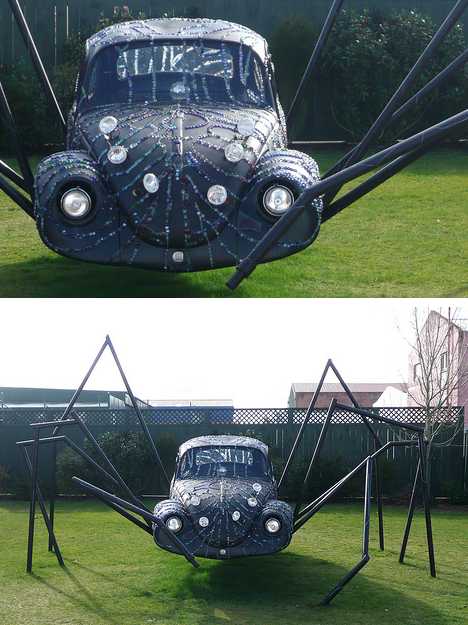 The bejeweled Spider Bug above exudes an elegantly gothic vibe as it crouches on the lawn near the visitor’s centre in Stratford, Taranaki, New Zealand. Ahh, Taranaki… come for the Spider Bug, stay for the Spider Bug’s dinner – take that any way you wish. Thanks to Robert Newell for snapping this shot and approving its use here. 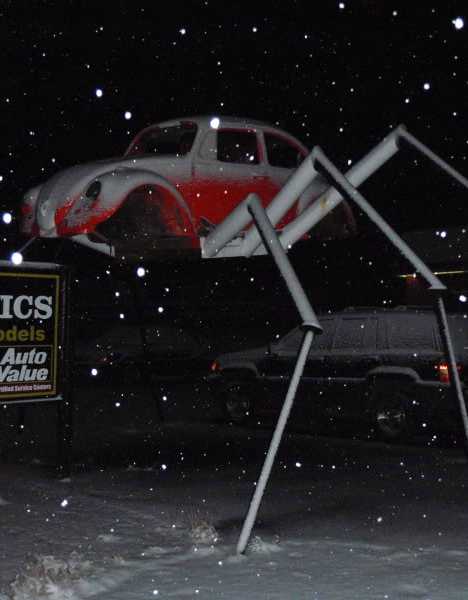 That’s not snow on an old video capture you’re seeing, it’s snow as in the frozen white stuff. Hey, this is Calgary in Canada, you were maybe expecting palm trees? Regardless, this is one welded arachnid one won’t want to run into while walking home from a Stampeders-Roughriders game. Even Green Riders fans aren’t this scary. 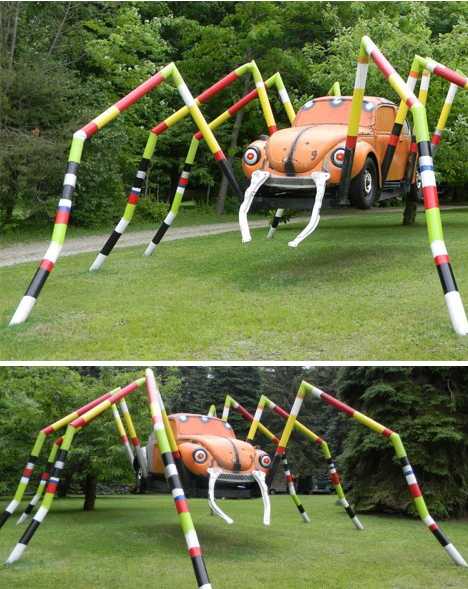 Looking for something eerie in Erie, PA? Step right up, if you dare. Former auto dismantler turned junkyard artist Dick Schaefer created the red-eyed, striped-legged, long-fanged Spider Bug above. “Usually, I will see the junk first, get an idea and look for a way to make it conform,” says Schaefer, who has also been known to turn cement trucks into bumble bees. Bees, my god. 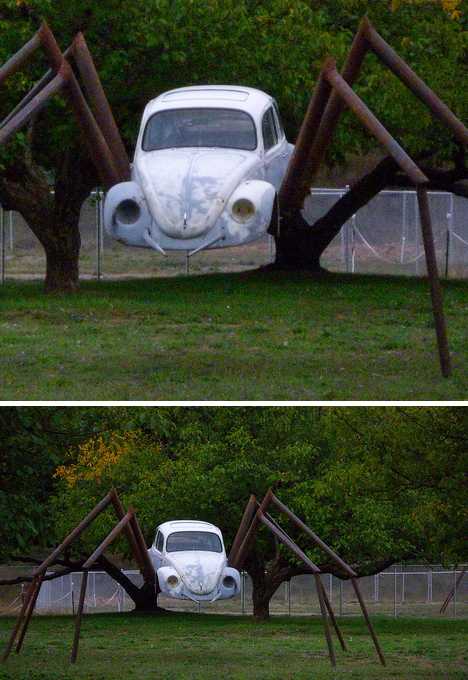 Kudos to intrepid photographer Scott Hart, who captured the above white & rust Spider Bug in a fenced field just off the I5 in Oregon. It appears the sinister sculpture (which may be one of the 4 original Fambrough pieces) roams a park beside a schoolyard… do your homework, kids, or else! 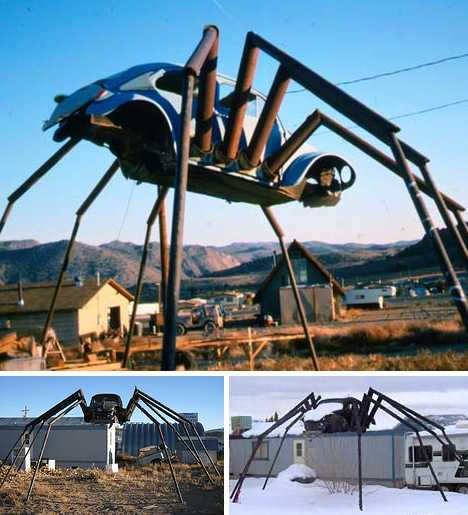 David Fambrough crafted the above Spider Bug with his usual attention to detail – the Bug has eight legs instead of the more typical six. It seems that Fambrough originally built four Spider Bugs around twenty years ago and at that time all four could be seen alongside Hwy 395 just outside Reno. 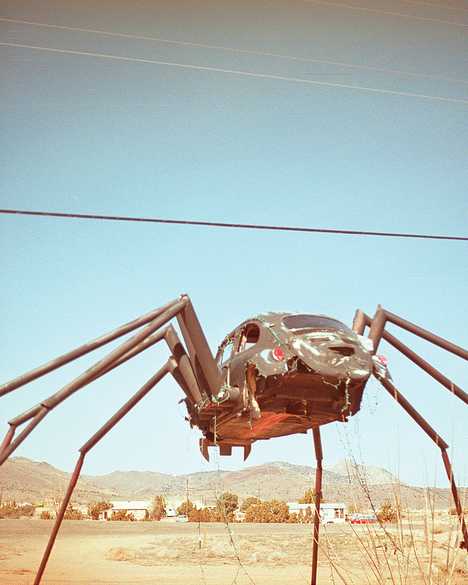 Time passed and the Spider Bugs did as Spider Bugs do, namely roam across the desert landscape gobbling up unwary travelers on the road to no return. 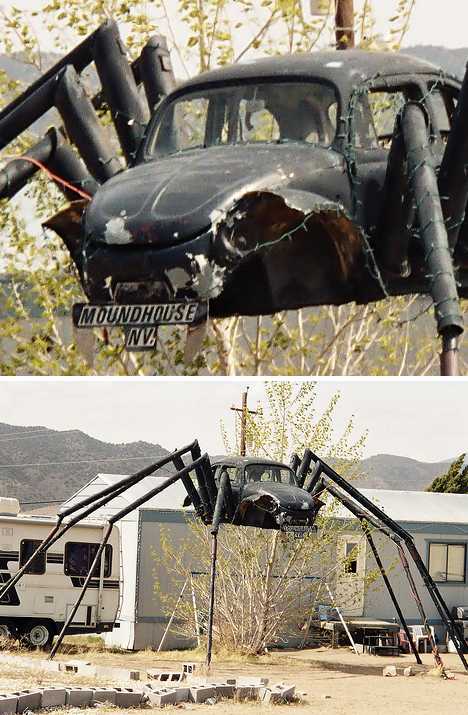 The big bad black beauty above ended up in Mound House, near Carson City, and is the tiny mining town’s main attraction… besides its 4 brothels, of course.