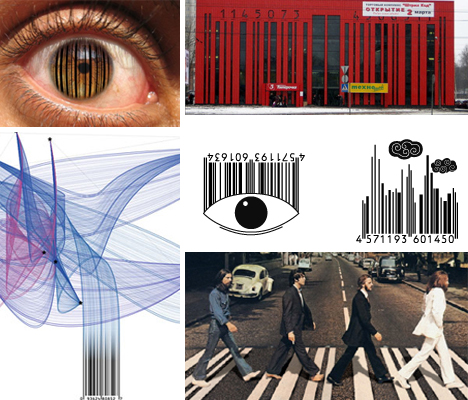 Barcodes may be a potent symbol of consumerism, but they aren’t just found on product packaging anymore. Whether imbued with meaning or merely appreciated for their visual impact, barcodes are turning up everywhere, from tattoos to graffiti to home décor. These 15 forms of barcode art take these ubiquitous black and white lines and make them fun, provocative and beautiful. 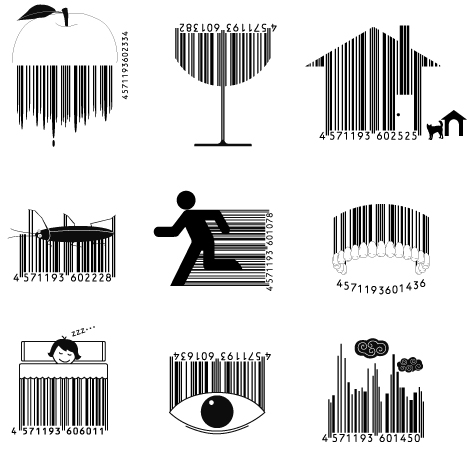 The team at Design Barcode asked themselves, “Why has the barcode never changed?” That led to a flurry of amazingly creative ways to reinvent the ubiquitous set of black lines, helping companies add a little more personality to their valuable product real estate. They’ve created barcodes for major Japanese brands such as Suntory, Calbee, Wacoal and more. 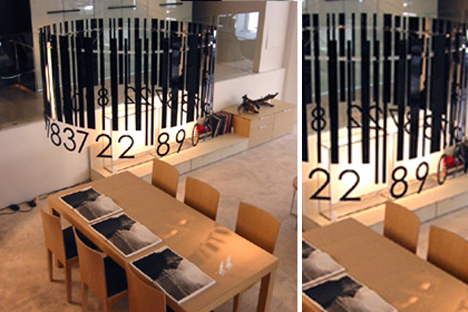 The transparent acrylic used as a base for this barcode chandelier light fixture from Super Mobilet makes it seem like it’s hovering overhead, like the specter of modern consumerism. The design was so popular, it sold out almost immediately. 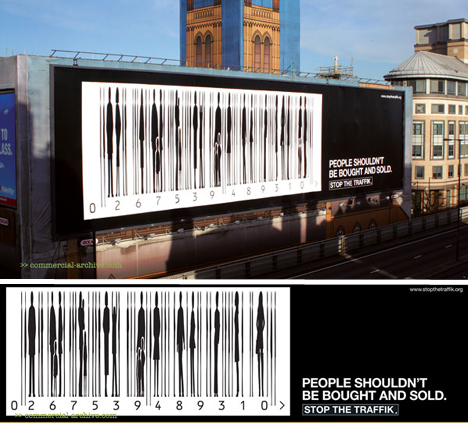 Another clever play on the barcode and all that it stands for is this billboard, designed by Leagas Delaney London for Stop the Traffik, a coalition working to stop human trafficking. It depicts silhouettes of human figures amid the bars, symbolizing the commoditization of human beings. 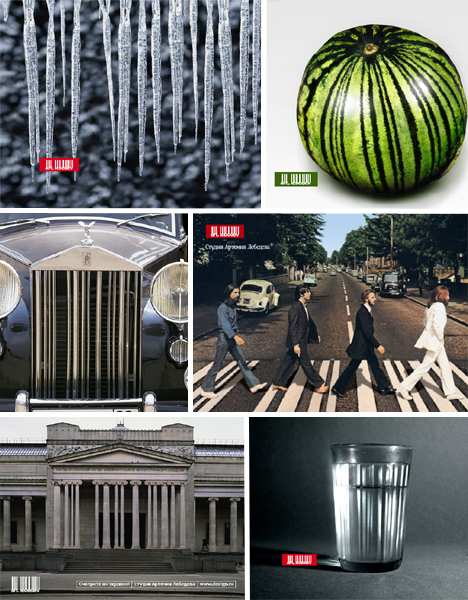 How many different ways can you portray a barcode using totally unrelated images? Russian design firm Art Lebedev creates posters that create their barcode logo using images like icicles, melons, columns on a building and even human eyelashes. 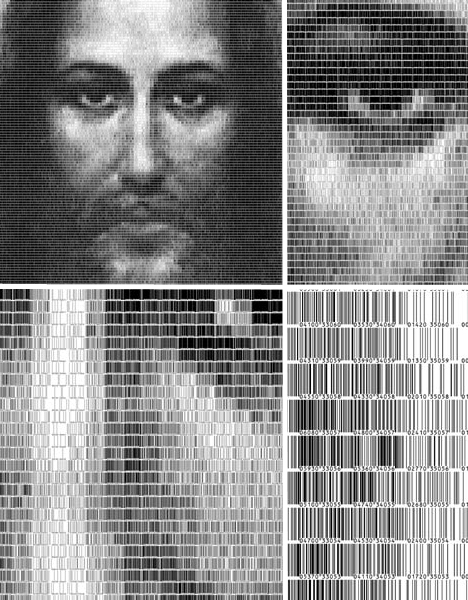 Artist Scott Blake has truly turned the barcode into an art form, using it to create portraits of iconic pop culture figures like OJ Simpson, Charles Manson, Oprah and Jesus. He also creates barcode stencils that he calls ‘word paintings’, and barcode graffiti, like an image that simply says “Scott Blake was here.”

Of his barcode portraits, Blake says, “I started making art with barcodes right before Y2K, inspired by the year 2000 computer bug, and threatening digital apocalypse. Barcode Jesus was born in Photoshop, by creating mosaics with simple shapes. I first tried circles and then squares. The tile patterns morphed into a cluster of lines, and before I knew it, I was staring at a bunch of barcodes. I assigned the numbers to describe each pixel’s grayscale value and grid coordinate.” 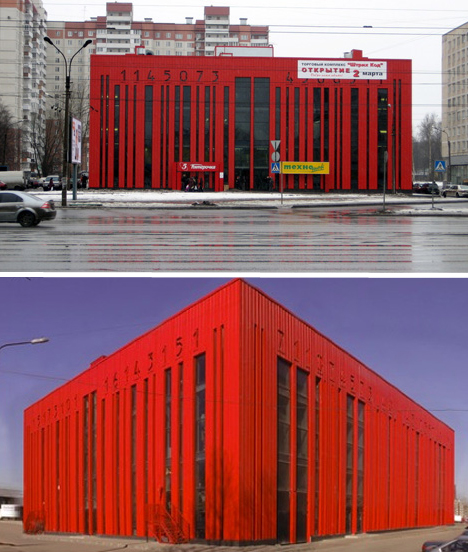 Russian architecture firm Vitruvius & Sons designed this bright red barcode building called Shtrikh Kod, which means ‘barcode’ in Russian. Located in a bleak, gray residential area on the banks of the Neva River, the ‘bars’ on the building are actually the shopping center’s windows. 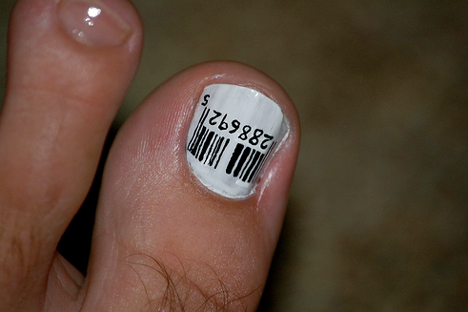 With all of the barcode-related images and products out there, it’s not too surprising that someone thought to apply the design to a pedicure. It may not be high-concept, but it’s certainly creative. 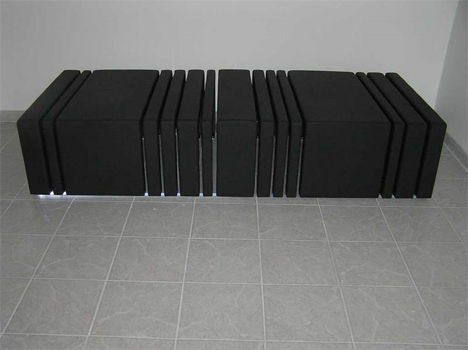 Barcodes have even made their way into furniture design, with this sofa by Jason John Muscat of Demuzz Designs. Each individual bar is made from foam-covered plywood, fixed onto an acrylic platform with LED lights incorporated into the base. 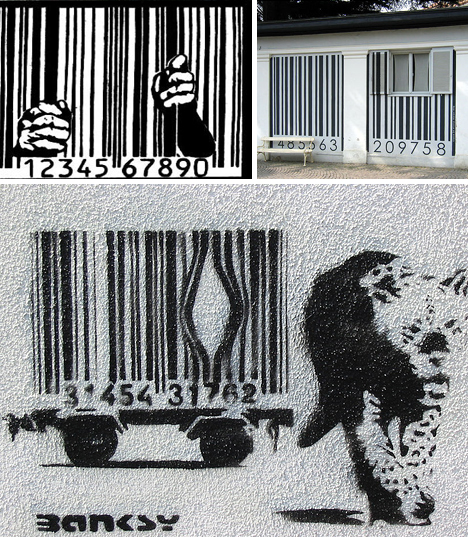 Barcodes are a common theme in graffiti, but none are quite so well known and iconic as a Banksy design that depicts a leopard escaping a barcode cage. Barcodes are often used as jail bars in art, usually symbolizing slavery to consumer culture. 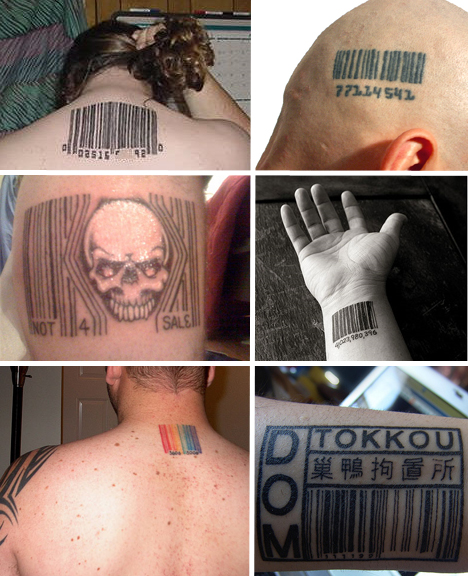 The barcode is also an increasingly common motif in tattoos. Some have meaning and some don’t – well done barcode tattoos may actually scan, while others don’t have any inherent meaning other than the barcode itself. For those seeking something less permanent, barcode artist Scott Blake creates custom temporary tattoos using Code 128-style encryption.

From Barcodes to Abstract Art 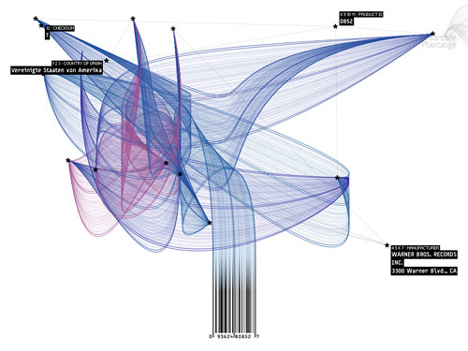 Scan or key any barcode into the Barcode Plantage website, and you’ll not only get the details of the country of origin, manufacturer, product number and sum – you’ll also get an abstract work of art and a melody based on the bars. Barcode Plantage calls each design “a unique tree in the garden of globalization.”

The Barcode Plantage website explains, “Once a bar code is keyed or scanned in, the program sends a request to the database, which returns a master file data. This master file data is then analysed to define positions, curves and colours of Bezier curves of the tree structure. The number of these curves will vary correspondence to the number of figures in the code. Simultaneously, the user will hear a melody, which is based on the figures of the bar code.” 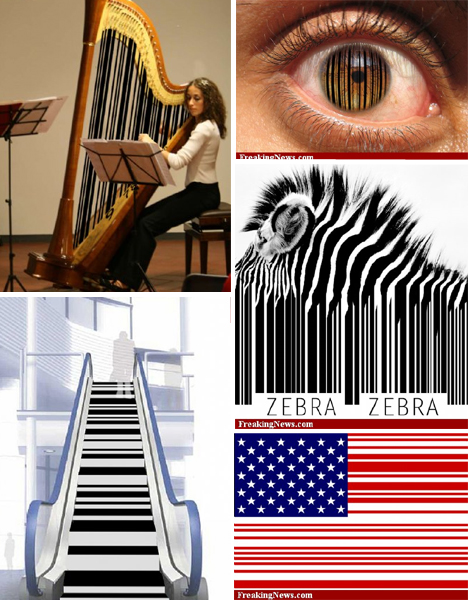 Photoshop contest website FreakingNews.com challenged its artists to create barcode-based art to celebrate the 57th anniversary of the first barcode patent. Contest entrants incorporated barcodes into photos in various ways, from the strings of a harp to the stripes in the American flag. 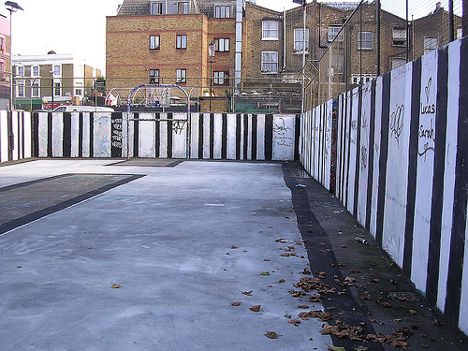 Playground, or prison yard? This London basketball court has had previous graffiti covered over by a giant barcode design on all of the walls, giving it a sense of incarceration. 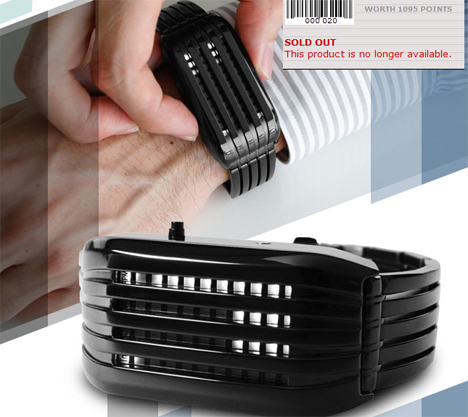 For those tired of having the time spelled out for them the traditional way, a barcode watch from TokyoFlash actually displays the time and date in barcode fashion with LED lights. 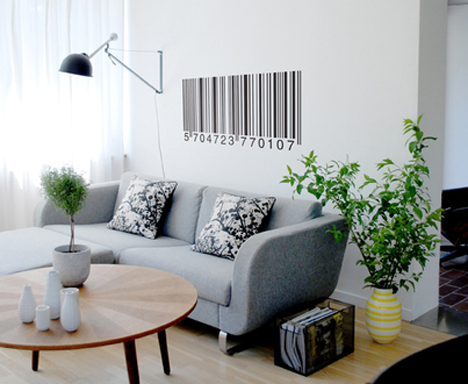 Fans of stark, high-contrast graphic design appreciate the barcode for its looks alone. This wall decal by Ferm Living might not have any deep meaning, but it looks pretty striking on a white surface.