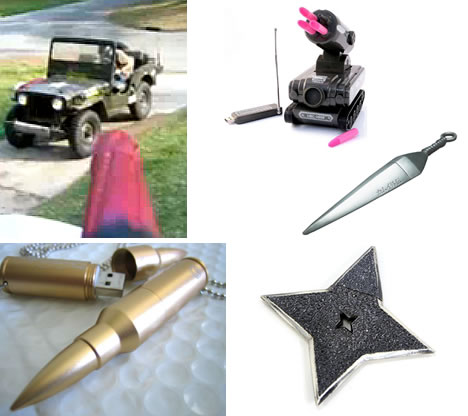 We geeks love our gadgets. We get bored with simple office instant messaging to co-workers. We get creative. But of course our creativity ties back into our computers and a USB port. It started with ninja-geeks and weapon-shaped USB flash drives. However, that was not enough to spice things up around the office. The USB arms race began and sneaky office warfare has never been the same. Some USB weapons are fun to shoot at your office buddy, but some are used to strike fear in your cubicle neighbor’s heart. Guard your office, guard your room, guard your computer. Here are 17 USB “weapons” made by geeks for geeks, from FAIL to fantastic. 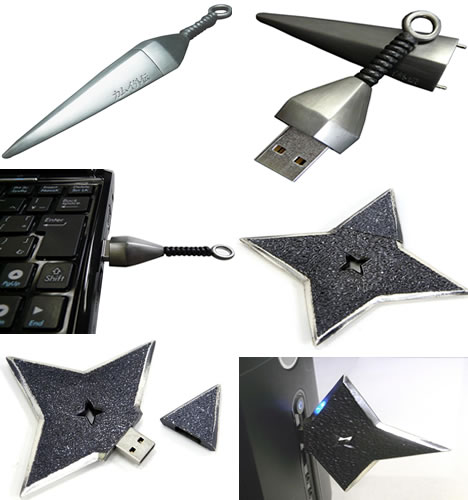 Awaken ninja-geek with these weaponized USBs. First there is a USB knife, a Kunai shaped USB thumb drive with 2GB of storage capacity, a great solution for the Ninja spy. Or how about a Shuriken shaped USB which also holds 2GB of storage capacity that you can sneak out of the building or can throw the star to kill your opponent?  These are perfect for the ninja-geek. 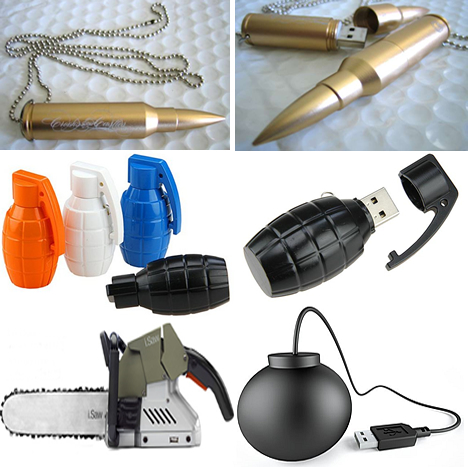 These are a few more USB weapon wannabes. The flash drive shaped like a large caliber bullet offers geeks both fashion and 1GB of function, plus it might put a bit of a scare into those people who see it. As in don’t anger that geek!  More on the fail side are these brightly colored Grenade USB drives, but they do offer 4GB of memory. These next two should frighten your co-workers at the very least. The i-Saw is USB 2.0 compatible and offers a vicious five-volt trickle of destructive chainsaw power. The Bomb USB is one flash drive that we don’t think people would want to carry around in airports as they might actually get held up by airport security. 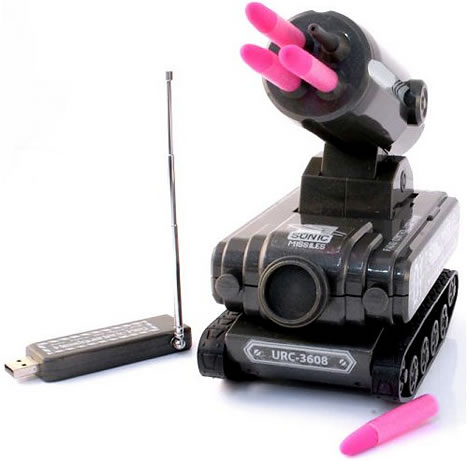 There is no better way to annoy a co-worker than with a barrage of tiny foam missiles with a RC tank that can deliver a payload at a distance from up to 12 feet. It can also be remotely controlled via the included ‘USB Tank’ PC software that allows you to steer the tank and raise of lower the missile launcher. This might offer you some level of deniability since you’ll never be caught holding a remote. There’s no camera on board so you’ll need to have a line of sight in order to properly steer it into position, but it does have a wireless range of about 25 feet to give you a tiny head start when the inevitable and immediate retaliation begins.

Here we begin a tour of USB-powered guns. Get ready to launch your flying foam missile attack on annoying co-workers. These do take some creative thinking, made by geeks to be appreciated by geeks. Those are some things all the USB weapons have in common. We’ll leave it up to you if a USB weapon is fantastic or fail.

Straight from a nerd-kit, here is a DIY USB-controlled water squirter weapon. The steps are laid out in great details when you watch the video. The main plus factor to this USB gun is that it does more than fire foam darts or missiles. For example, your co-worker would be surprised to be blasted with water. Or if you have a cat that won’t stay away from your computer, pow-squirt! Kitty should then run away.

This is a Lanciamissili USB weapon. The USB missile launcher is remotely controlled by a PC with a web cam.That’s right, a barrage of foam missiles and then retribution will be forthcoming from your geeky co-workers. Basically, these USB weapons are all the same, point, fire and shoot. You are free to decide FAIL or fantastic.

This USB weapon uses a laser pointer and a web cam. The software tweaked with some custom Visual Basic lines of code equal a laser-guided USB missile launcher.  When a laser pointer is moved into the field of the web camera, the gun turret will move to point and fire its missiles. A person might wonder why you are pointing your laser at them, but they won’t wonder for long  before your missiles attack them.

This USB weapon is a rocket launcher that uses the Wii remote tilt function to control the launching missiles. Whether or not that pushes this USB rocket launcher from FAIL to fantastic is not clear, but if you are a Wii gamer and would like a USB weapon, then this one might be for you.

Clearly this was devised by some ticked co-worker intending to exact a little vengeance. Not a mere USB weapon that launches deadly foam missiles, but instead an entire battery of USB weapons. This is moving closer to fantastic if for no other reason than the chaos it would clearly create in the office.

This modified USB rocket launcher shoots infrared machine gun rounds and foam missiles. One other major difference with this USB weapon is that it was created to do more than wreak office destruction or family chaos. The machine gun can be calibrated to shoot down any remotely controlled toy plane or helicopter.

USB Missile Launcher Pimped to be a Weapon

So we’ve tried to be nice and tried to be polite up until now. This one might have more potential to launch sharp pointy weapons. Put it near to guard your computer privacy and it might work as a deterrent. Yes it gets points for being a USB weapon. Otherwise, FAIL.

Straight out of the Virtual Crib is an active defense system. It’s close to deadly and USB-controlled. The creators of this USB weapon suggest that if someone is breaking into your house, you don’t wait for the police to arrive. Instead you drive the thieves out of your house with this USB BB gun. This is much closer to fantastic, shooting BBs and not mere foam projectiles, but the next one is a clear winner.

Now this USB gun is awesome! This one is fantastic! Watch the video and then you too will be wanting one. Lucky you, there is still time before Christmas.