The opportunity to catch a glimpse at life in a long-ago era in 3D is rare indeed, but thanks to the stereoviews taken by photographer T. Enami, Meiji Japan in the early 1900s momentarily appears vivid and immediate. Enami was Japan’s most prolific stereo-photographer, and his stereoviews have appeared in National Geographic Magazine and many books.

Each pair of images captured by Enami, ranging from landscapes and sedate scenes of country life to humorous photographs of beefy men bathing nude, has been assembled in a Flickr gallery by Okinawa Soba and transformed into animated GIFs by Pink Tentacle. 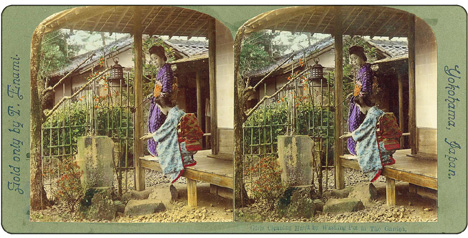 In traditional stereoscopic photography, a three-dimensional illusion is created from a pair of 2-D photographs that represent two slightly different perspectives of the same object or scene. The deviation between the two photographs is similar to the perspectives that both eyes naturally receive in binocular vision.

Such images are normally viewed in 3-D using a stereoscope, but ‘freeviewing’ is also possible, with a process that involves putting one’s eyes directly over the images and slowly backing away while focusing on the single merged, out-of-focus picture that appears.

Enami was an enigmatic figure for many decades after his death, but information provided by his descendents in 2006 helped bring together a stunning collection of work. The online archive of his photographs represents only a small fraction of his remarkable legacy.