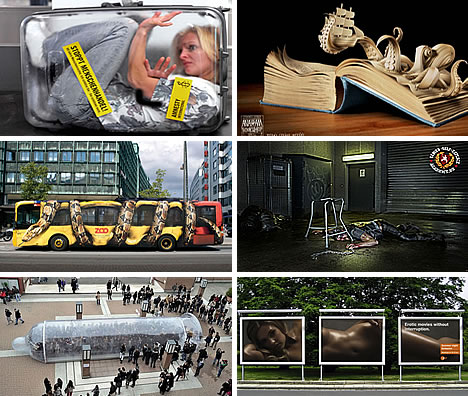 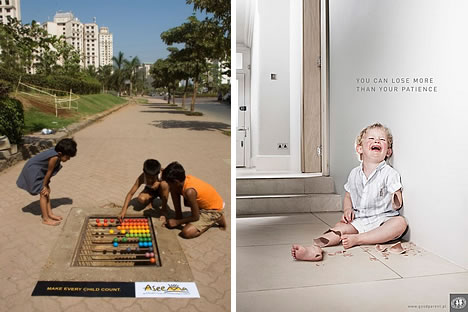 Assema Charitable Trust for Children struck up a guerilla ad campaign, “Make every child count.” In the affluent city of Mumbai, the need to raise awareness for educating street children was highlighted through transforming storm drains into abacuses. The act of which was bringing the school to the street, making it impossible for these residents in high-end estates to ignore. On the right, Nobody’s Children Foundation came out with many porcelain kid posters. The slogan is “You can lose more than your patience.”

Amnesty International: Woman in a suitcase 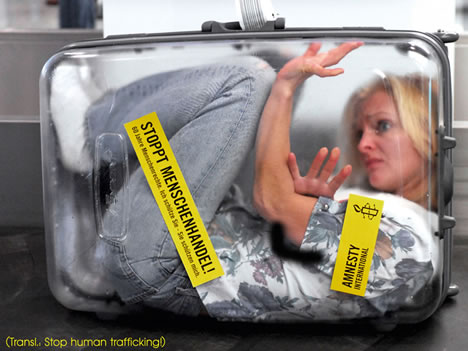 Serviceplan of Germany created this ad for Amnesty International to mark the 60th Anniversary of Human Rights as an action plan against human trafficking which affects more than 500,000 women and girls annually. The idea was to start a promotion campaign which was impossible not to notice. The woman in a crystal suitcase was one of the most successful promotion in recent years.

The horrifying repercussions of drinking and driving bluntly tumble from the screen in an emotive film for the New Mexico Department of Transportation written and directed by Smoke & Mirrors New York’s Sean Broughton. 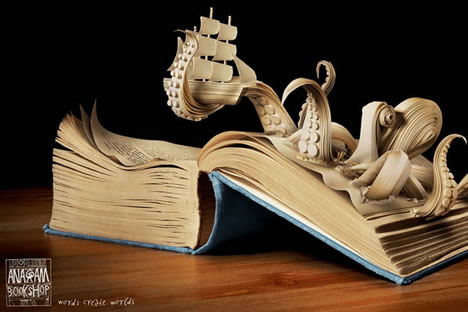 Anagram, in Prague, is an English-language bookshop with a vast assortment of fiction and nonfiction. Anagram came out with many ads like the one above, beautifully illustrating their slogan “Words Create Worlds.” 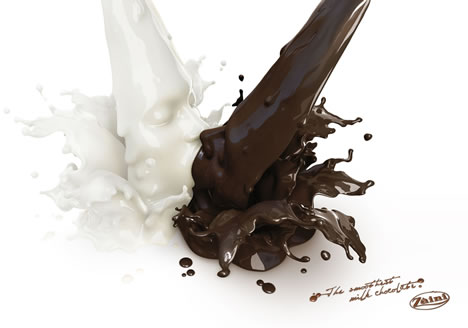 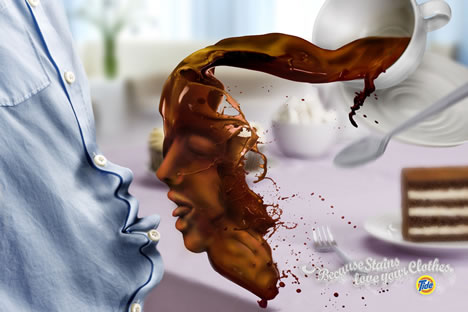 Both of these agencies and ads center around kissing. Leo Burnett of Italy created the top ad for Zaini. The slogan is “The smoothest milk chocolate.” On the bottom, the Miami Ad School of San Francisco took Tide to a new level. The slogan is “Because stains love your clothes.” 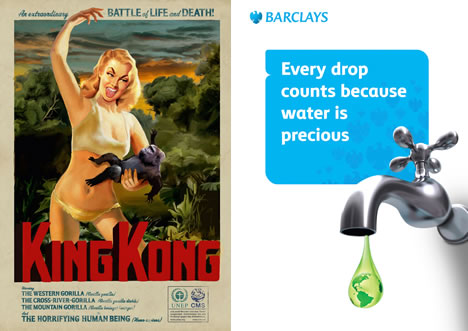 To save people, places, things…a common tactic. Neither of these ads were particularly well received. Serviceplan of Germany came up with KingKong. The gorilla is in an extraordinary battle of life and death with the horrifying human. On the right, Blue Circle Advertising of Jakarta, Indonesia, created an ad for Barclays Bank. “Water.  Every drop counts because water is precious.”

With an emotional tug to the heartstrings, Rapp USA created this TV ad for Generosity Water. Throughout the beach cities in Los Angeles, free drinking water is provided to dogs outside of local businesses and along the Strand. In order to bring the global clean water crisis to life for people so accustomed to readily available water, we’ve decided to talk about their pets. The reality: our pets drink cleaner water than 1 billion people across the globe. What now? 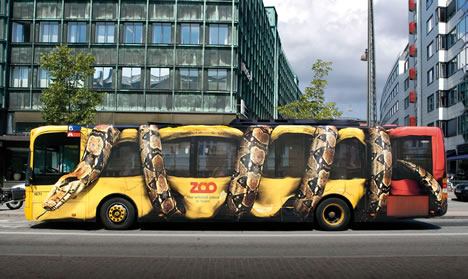 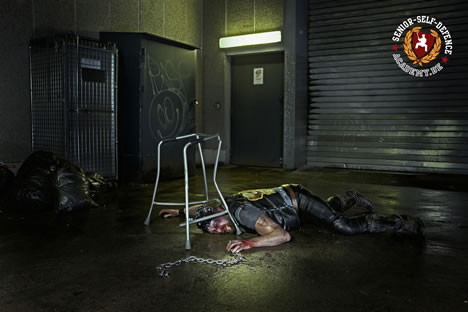 10 advertising of Antwerp, Belgium, created a series of ads where senior citizens kick bad guys to the curb. This campaign seems to be paying off for both seniors and the Senior Self Defense Academy. 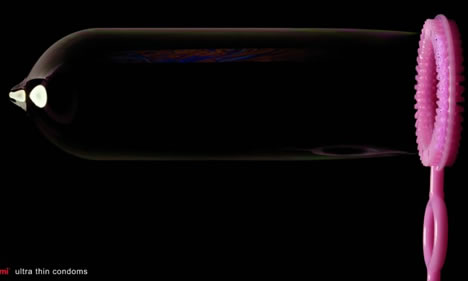 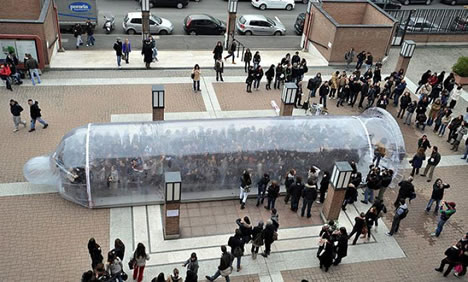 (image credits: Desigg,Ads of the World)

German condom manufacturers Condomi promoted the “Ultra Thin” line with this print and outdoor advertisement showing a condom-shaped bubble. The ad won a Golden Drum for Press and Golden Drum Grand Prix award for Outdoors.The Ultra Thin Bubble ad was developed at DRAFTFCB Kobza in Wien, Austria. Now Available of Milan, Italy, spread the word for the bottom ad campaign event through social media. The “Condom Mob” had 230 people in a condom against AIDS! 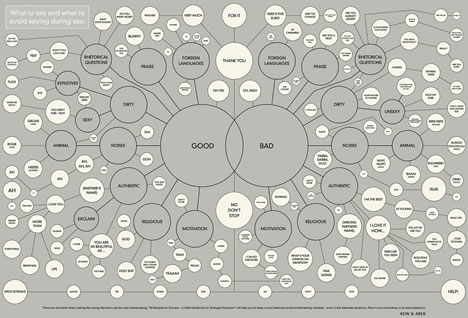 (image credits: Ads of the World,Ads of theWorld)

The top infographic for DEVK Insurance is simple but manages to convey its message to drivers. It was created by Grabarz & Partner of Hamburg, Germany. The bottom Lovescheme infographic was created by Walker Werbeagentur of Switzerland and is complex. “What to say and what to avoid saying during sex. 50 Recipes for Success.”

This TV commercial from the advertising agency Ogilvy, in Johannesburg, South Africa, was for Exclusive Books. It is called Charades. The slogan is “There’s a club for people who love to read.” 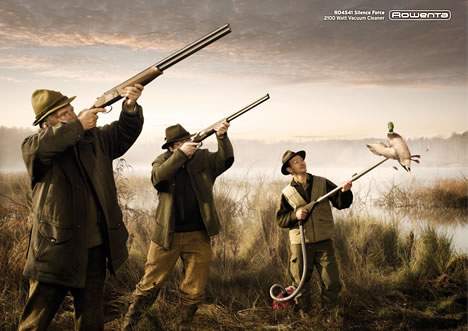 This Duck hunting Rowenta ad is from Publicis in Frankfurt, Germany. The slogan is “RO4541 Silence Force, 2100 Watt Vacuum Cleaner.” 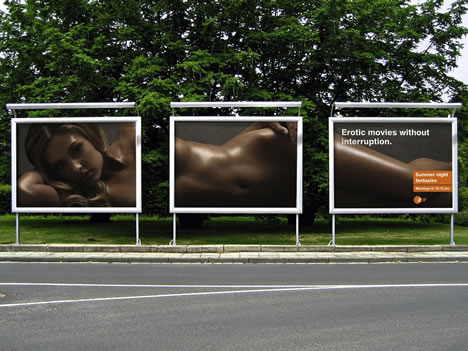 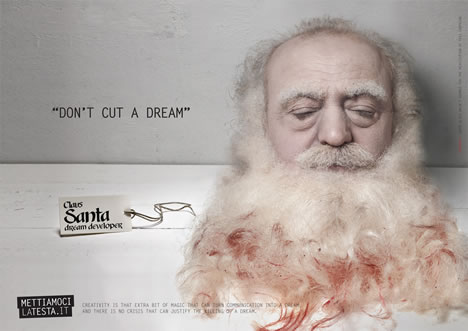 There is definite shock value to seeing a beheaded Santa, but is it too much? www.mettiamocilatesta.it is a web-based campaign promoted by Milc against the decrease of advertising investments during the economic crisis. On this ad it shows the tag Santa dream developer. Creativity is that extra bit of magic that can turn communication into a dream. And there is no crisis that can justify the killing of a dream. The slogan is “Don’t cut a dream.”

Again there is shock value to this “every diamond tells a story” ad. Young & Rubicam of Cape Town, South Africa, put together this TV commercial for the African Diamond Council. The slogan is “Conflict Diamonds.” It is both powerful and disturbing. 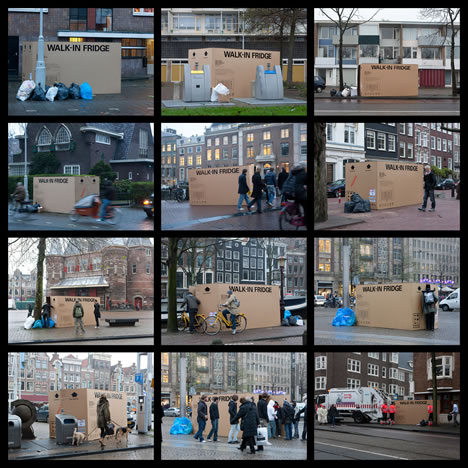 (image credits: Ads of the World)

At the end 2009, Heineken put the famous Walk-in Fridge commercial on air once more. At the same time, these huge Walk-in Fridge boxes were put on the streets of Amsterdam on garbage day, to imply that the huge fridge was actually for sale and that people were actually buying it.