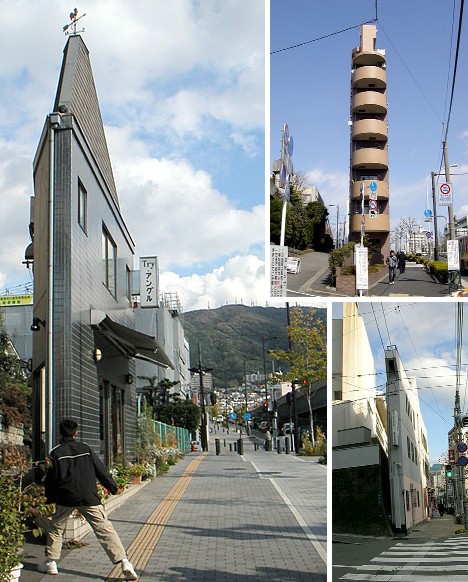 When land is expensive or in short supply – or both, as is the case in Japan’s major metropolises – smart real estate developers don’t get down, they look up. These 20 tall thin Japanese buildings show what happens when builders shoot stories upwards to get the most bang for their yen. 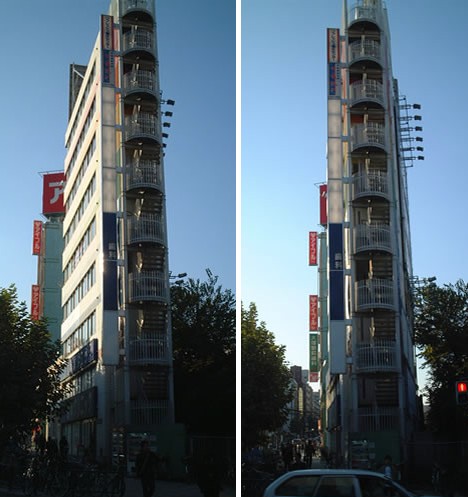 (images via: Mike’s Blender)
Even after two decades of economic stagnation and the collapse of a formidable stock market and real estate bubble, Tokyo remains one of the most expensive places on Earth for developers to build in. The apartment building above is typical of those constructed in the “good old days”, when building thin was an ideal way to fatten one’s bank account. 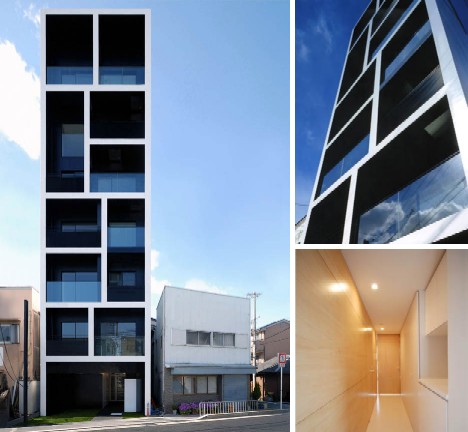 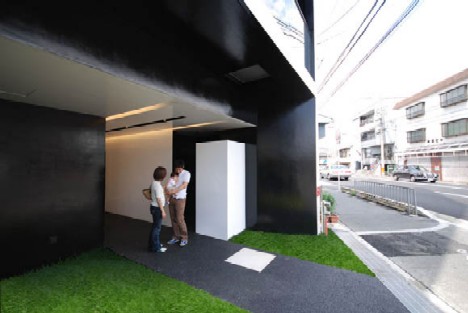 (images via: Totonko)
When Tokyo’s bubble burst at the end of the 1980s, building thin remained in fashion but for very different reasons, notably the need for developers to get the highest possible ROI in a buyer’s market. The design for a modern apartment building conceived by Mitsutomo Matsunami is a marvel of simplicity and minimalism: though seven stories tall and offering 10 apartments of varying sizes, the building’s ground footprint is just 1,200 square feet. 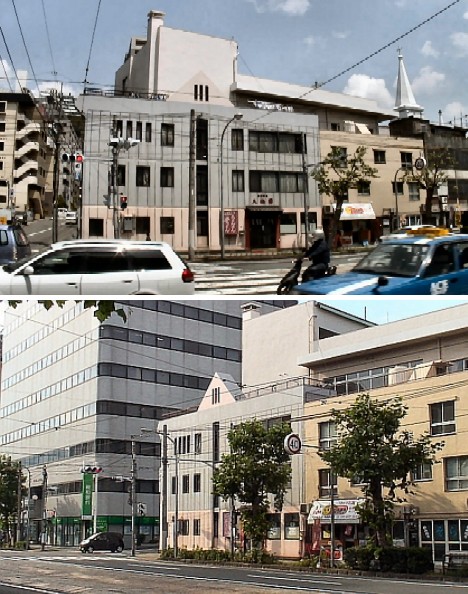 (images via: Yukichika World)
When is thin TOO thin? That depends on your point of view. Take this building in Nagasaki. Viewed face-on, it looks rather normal; wider than it is tall and with an architecturally interesting pyramidal peak on its roof. 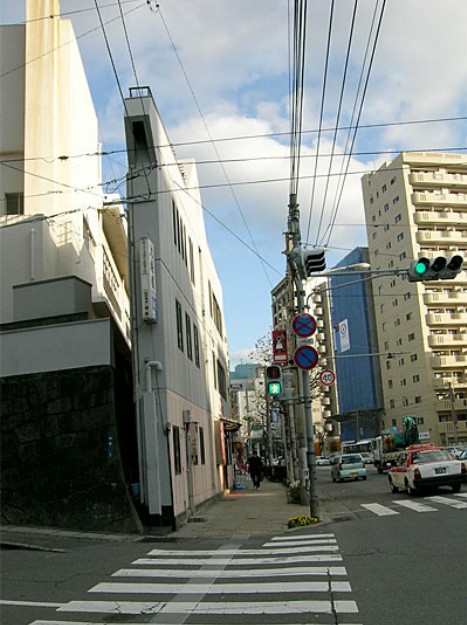 (image via: Sergio In Nagasaki)
Step around to the side, however, and… whoa! Unless the building operates using the same space-expanding engine as Doctor Who’s Tardis, it’s hard to imagine how anyone could function normally once they entered. And yet, the author of the blog that describes this splendid splinter states that there’s a Chinese restaurant inside, on the ground floor! 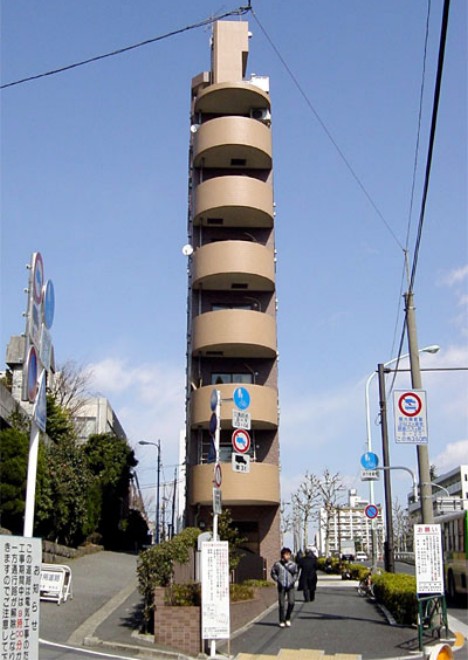 (image via: Joseph Tame)
If you live in a modern American suburban home, more than likely your front lawn is divided into a larger main expanse plus, after the sidewalk cuts through, a small area that continues on to meet the street. The post-sidewalk slice isn’t useful for much, maybe the City will plant a tree there but that’s about it. Not so in the Ushigome district of Kisarazu City in Japan’s Chiba prefecture, where they use that small space to build apartments on. 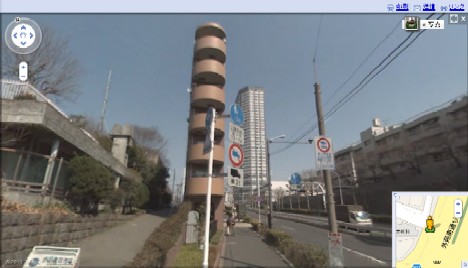 (image via: Google Maps – Japan)
The semicircular balconies are a cool feature, as they offer a 180-degree view for claustrophobics… who likely wouldn’t set foot in this building even if they were being chased by flaming wolves. 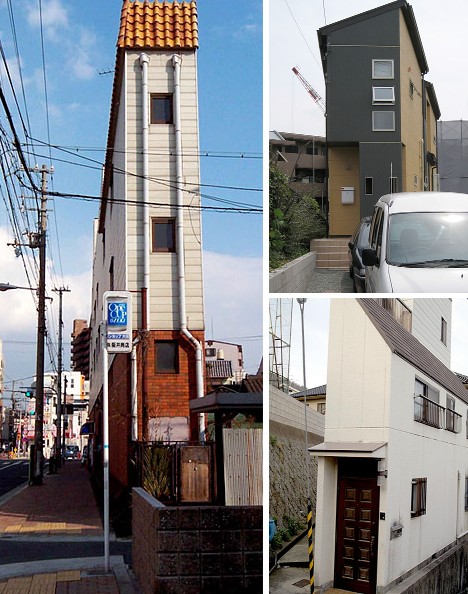 (images via: M.Terada, Jimgris and [email protected])
Here are a few more apartment blocks and individual houses in built-up, urban areas of Japan. In many cases, the size of the footprints chosen by developers aren’t dictated wholly by the presence of existing buildings – in those shown above, there appears to be sufficient space to construct what most would consider to be a normal building. For reasons yet undisclosed, the developers of the structures above preferred to stay anorexically slim. 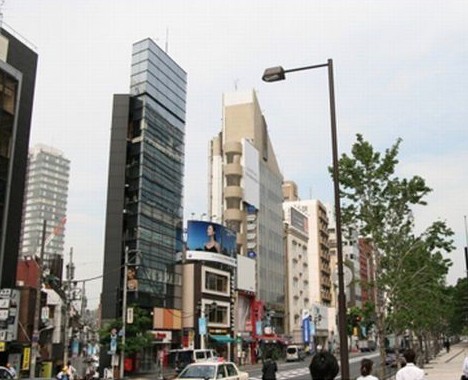 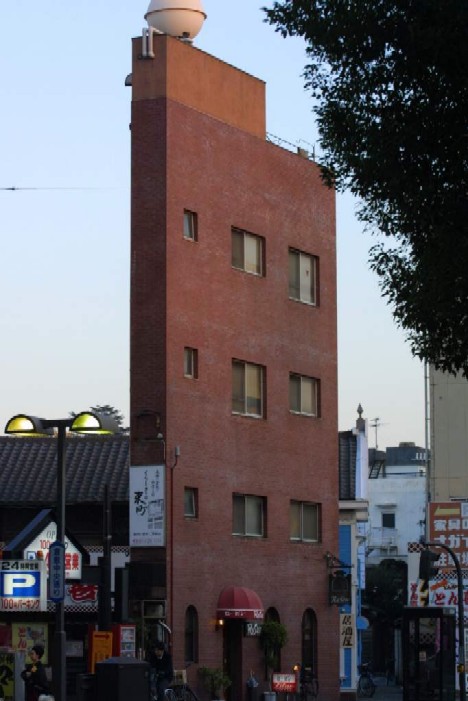 (images via: Izismile and Brad Templeton)
Downtown districts of Japan’s larger cities are where you’ll find a host of slim towers, all appearing to compete for the same small section of real estate. It’s been commented that if Godzilla really does exist and decides to go on a rampage, he’ll have a grand old time playing dominoes with Japanese skylines. 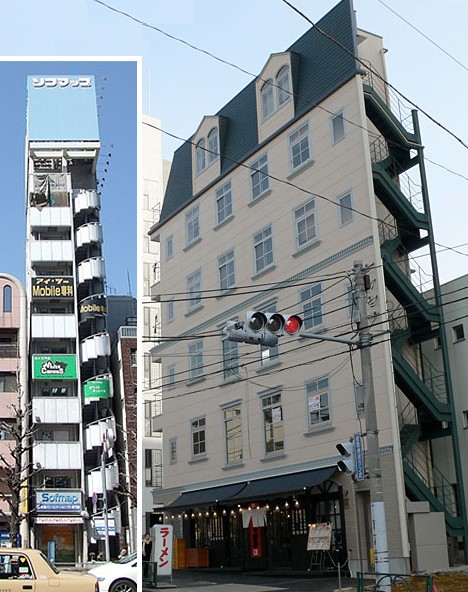 (images via: Whooba and Chipple)
The two thin Tokyo buildings above show that it’s possible to look thin AND look good… at least, look different. The structure on the left saves interior space by mounting its staircase – a 10-story spiral staircase – on the exterior. I’m guess the penthouse isn’t the most expensive unit here. On the right we have a building that aims to look like it belongs in Paris but actually fits in better on a street in Rock Ridge… not the real Blazing Saddles town, the fake one made of plywood storefronts. 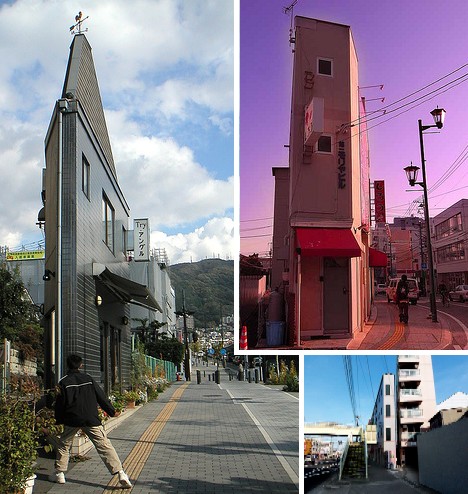 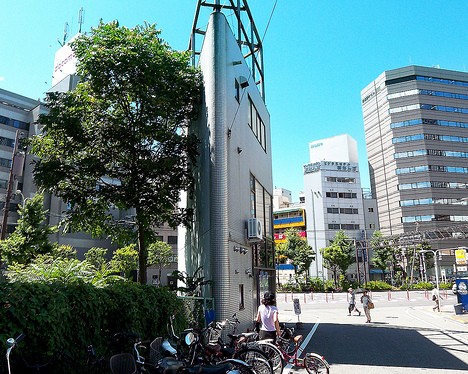 (images via: M.Terada)
Photographer M. Terada has posted a set of images taken of so-called “Pancake House” or “Kamenori (razor) House” buildings in the Osaka area. One of the more striking is shown above left, and appears to be a restaurant cheekily named “Try Angle”. 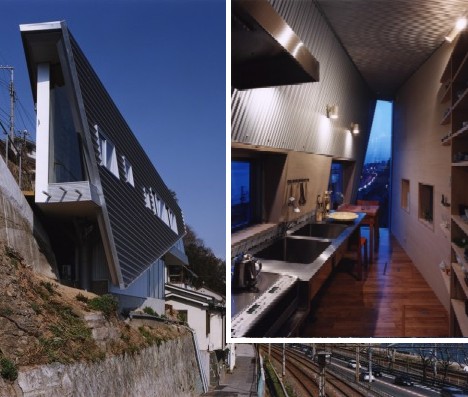 (images via: M.Terada)
Just like the cars of the Fabulous Fifties compared with those of today, a building can be extremely thin on the outside yet seem comfortable on the inside due to clever, ergonomic design. These buildings have got space to spare where it’s needed most – after all, our bodies aren’t shaped like squares, are they? 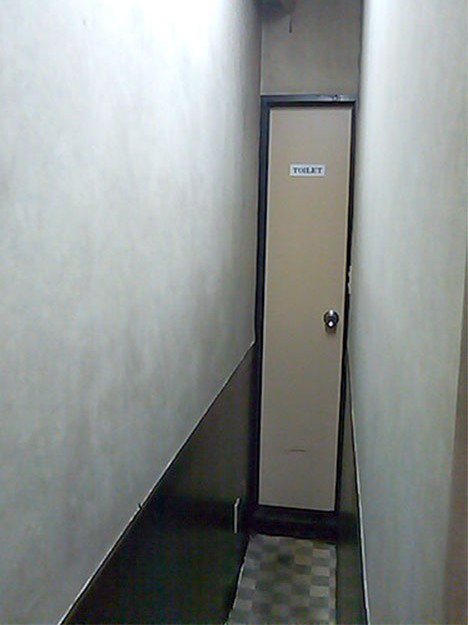 (image via: Bouncing Red Ball)
Umm, did someone say “ergonomics”? Maybe that just goes for the expensive, designer slim buildings. The run-of-the-mill, workaday thin buildings have to cut corners in areas some might feel are, well, a little too close for comfort. 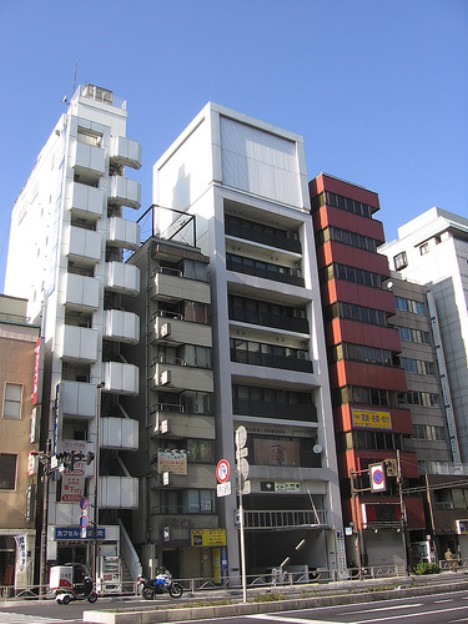 (image via: 1987porsche944)
Here’s a real treat for the thin building fan: a cluster of slim structures seemingly leaning on each other for support near Hamamatsucho Station in Tokyo. According to the photographer, the brownish-red building on the right houses an eyewear shop on the ground floor and a chiropractic clinic one floor up. The width of the building on the inside is about 2.5 meters or about 7.5 feet, not exactly luxurious but livable assuming there’s decent length to go with it. The thin white building on the left is a Capsule Hotel – the room there make those in the eyewear building seem positively spacious. 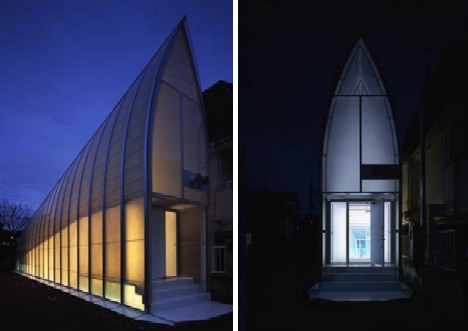 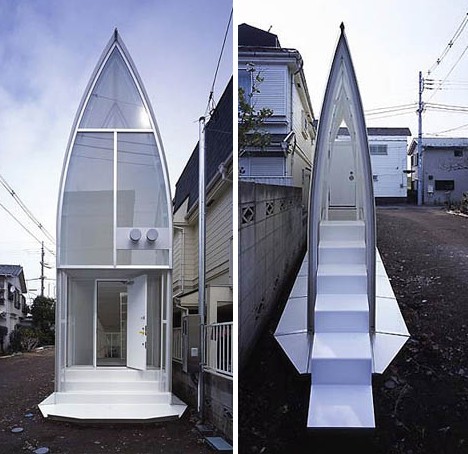 (images via: Dark Roasted Blend)
Just another “House in Tokyo”? That’s what this design by the Atelier Tekuto architecture studio seeks to define in this exquisite, cathedral-like structure. The most salient feature of this design study is the rear entrance where a stepladder unfolds to the ground as in some futuristic spaceship. 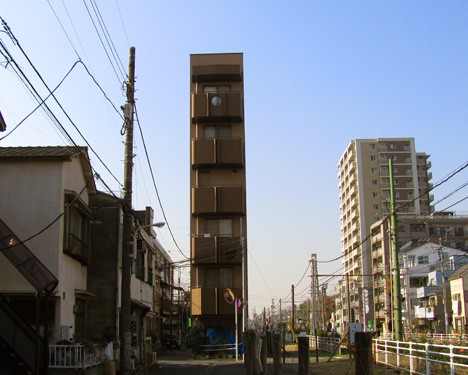 (images via: Mike’s Blender)
So lonely… the building above stands alone and at the mercy of earthquakes, typhoons or volcanic eruptions. Good thing Japan never gets any of those… oh, wait. It does seem strange that so many tall thin buildings have been built – and are STILL being built – in a country so often visited by nature’s more violent phenomena. 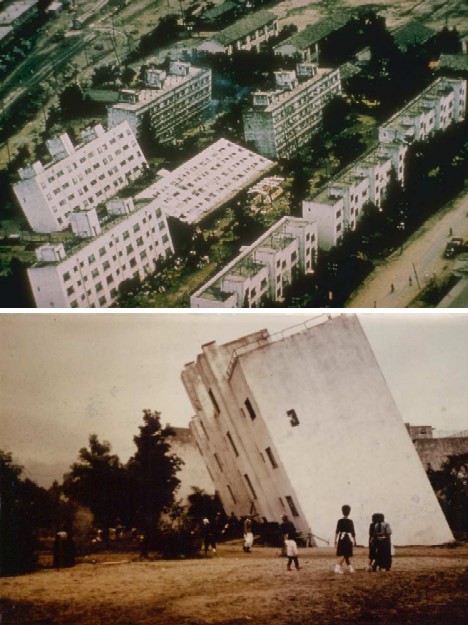 (images via: WWU Geo-hazard Index and Kyoto U)
Building codes are indeed more strict in Japan but how can a building that looks like it’ll fold up like a cheap circus tent at the mere rumor of a typhoon meet some of the toughest rules & regulations in the world? Then again, what are the works of man compared to the immeasurable power of nature? As the rows of not-so-narrow apartment blocks capsized during the 1964 Niigata Earthquake so obviously indicate, not a whole lot.