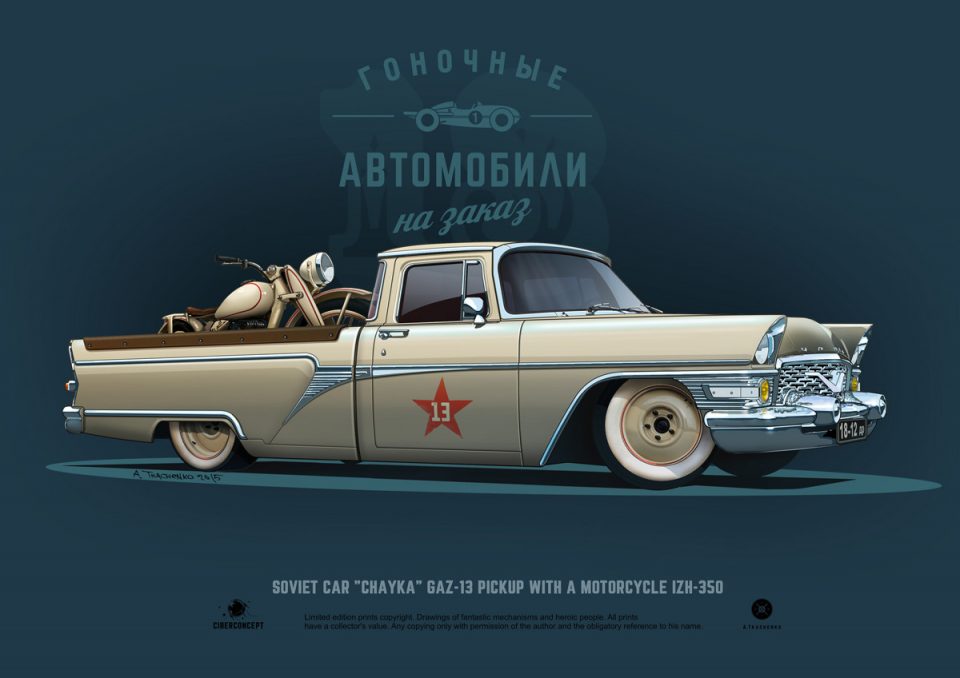 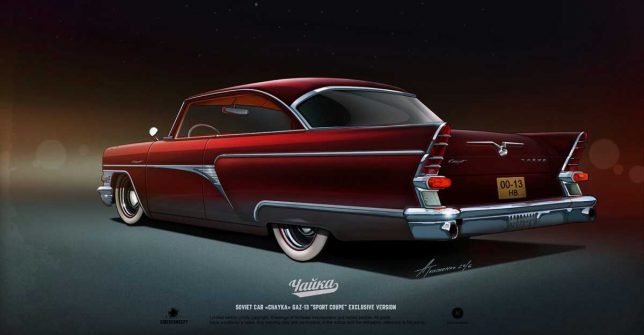 “General Motors is not in the business of making cars. It is in the business of making money.” So stated the late Thomas Murphy, Chairman of General Motors from 1974 thorough 1980. That mantra was turned on its head back in the USSR where state-run automotive “businesses” cranked out an astonishing variety of unappealing utilitarian conveyances that wouldn’t make their manufacturers money unless they were melted down and minted into kopeks. 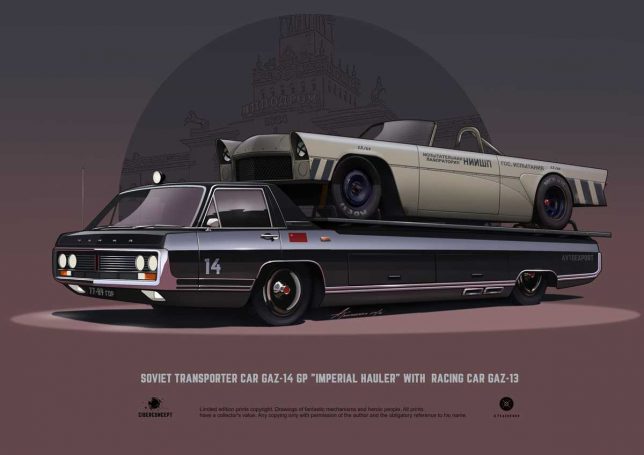 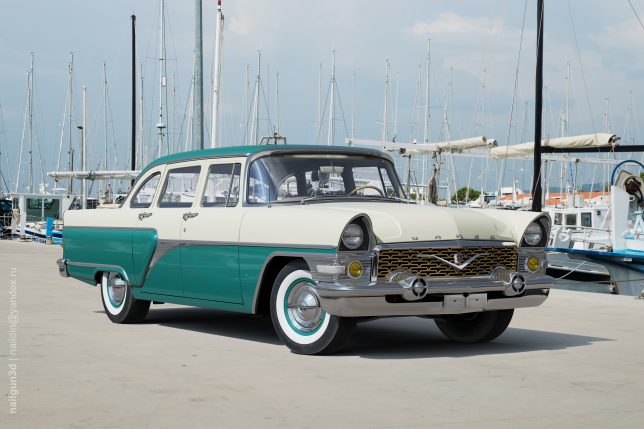 That said, Soviet designers managed to express their creativity in very limited ways though such expressions always took a back seat to utilitarianism. Andrey Tkachenko, a young freelance artist and graphic designer based in the northwestern Russian Federation city of Nizhny Novgorod, looks beyond the limits of those stodgy soviet auto designs and extrapolates their modest aesthetics to heights the original designers feared to even imagine. Case in point: the GAZ-13 M13 “Chaika”, a soviet luxury car produced between 1958 and 1981 that falls stylistically between a Packard Caribbean and a Checker cab. Most Chaikas were painted black; the two-toned example above being a rare exception. 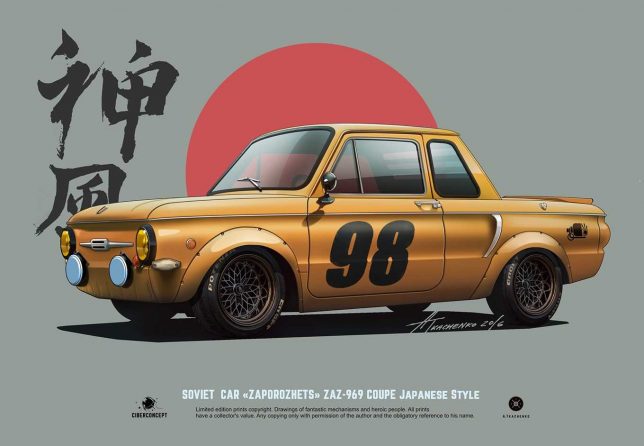 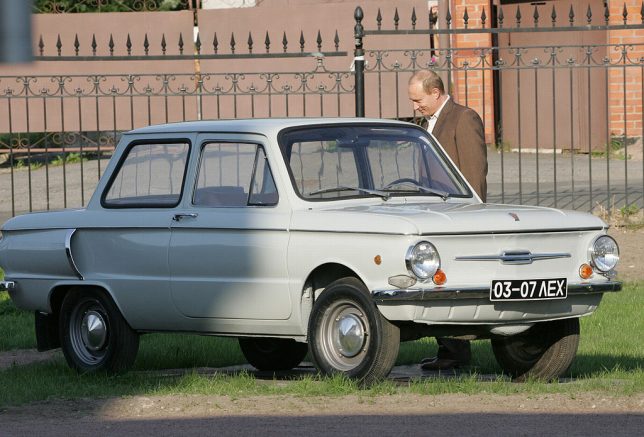 We’re showcasing some of Tkachenko’s graphic renderings – “ciberconcepts”, as he calls them – along with images of their real-world inspirations. It’s an endeavor made possible though the artist’s trademark of captioning most of his works with the vehicle’s model designations. However, we must take issue with the “ZAZ-969 Coupe Japanese Style” above; it’s actually a ZAZ-968 similar to Vladimir Putin’s first car, a 1972 model. Being a judo aficionado holding a black belt, Vlad would likely approve of Tkachenko’s subtly Japanesque makeover. 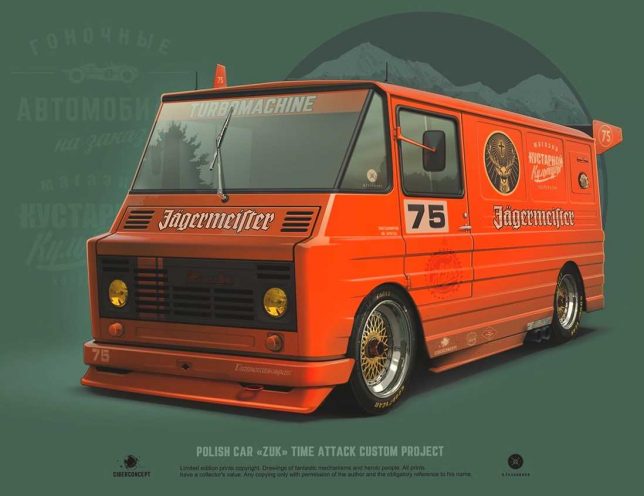 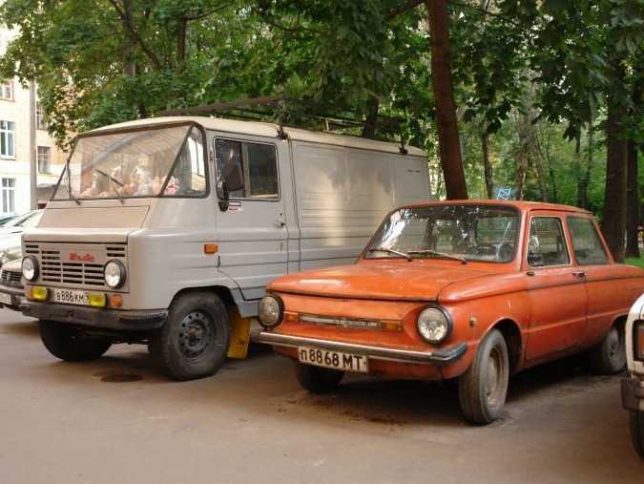 The Zuk (Polish for “Beetle”) was manufactured by the FSC Lublin Automotive Factory in Poland for a mind-boggling 40 years – from 1958 through 1998 – with few changes over the production run. Panel van versions were exported to the Soviet Union which is how Andrey Tkachenko knows of them. Tkachenko’s take on the alarmingly slab-sided Zuk transforms the rough & ready van into a Jagermeister-spewing “Time Attack Custom Project”. Can’t say it doesn’t look too shabby, with or without the aid of Jagermeister shots. Just below it is a real-world Zuk parked beside a late-production (between 1979 and 1994) ZAZ-968M.

Step On The GAZ 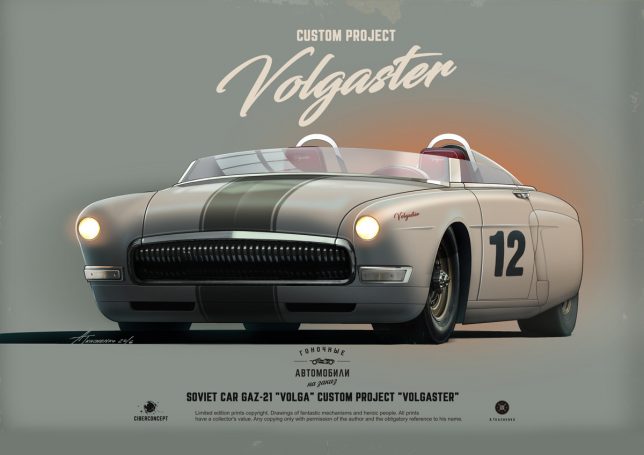 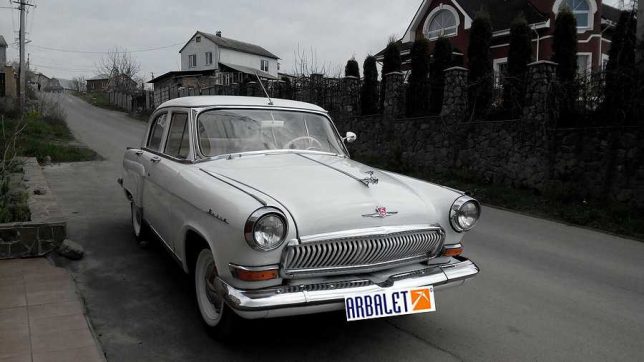 The GAZ-21 “Volga” was a so-called “executive car” manufactured by GAZ (“Gorky automobile factory” in English) from 1956 through 1970. Volga’s were desirable cars in their day, though one had to be in the KGB to order the hot V8-powered version with an automatic transmission. Exuding a 1952 Ford-ish vibe, the third series (1962-70) displayed a toothy chromed grill that features prominently in Tkachenko’s chop-topped, two-seater “Volgaster”.