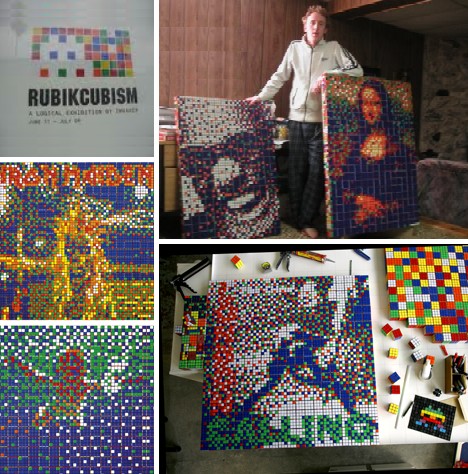 Rubik’s Cubes are meant to be solved, right? Wrong – the art of cubing takes on a different meaning under the 8-bit eyes of Invader. Twisting dozens, even hundreds of Rubik’s Cubes into precise patterns of pixelated pointillism, Invader updates artistic techniques pioneered by Picasso, Duchamps, Seurat and others into a new and distinctly modern form: Rubikcubism. 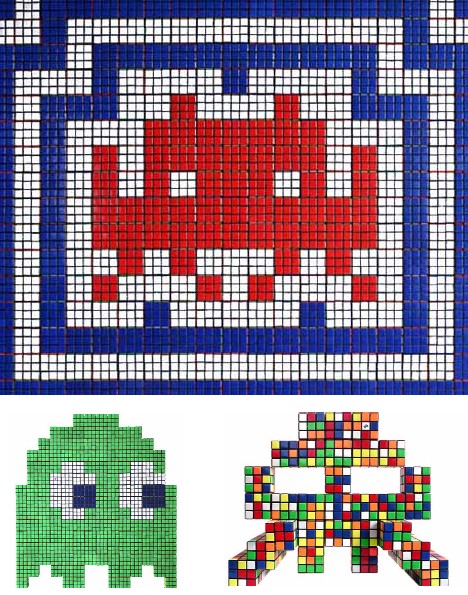 Who or what is Invader? One clue is the name of this former French street artist’s website: Space-Invaders.com. Indeed, Invader’s first pieces of what has been dubbed Rubik’s Cube Folk Art were representations of early 8-bit arcade game characters such as the digitized alien enemies from Space Invaders. 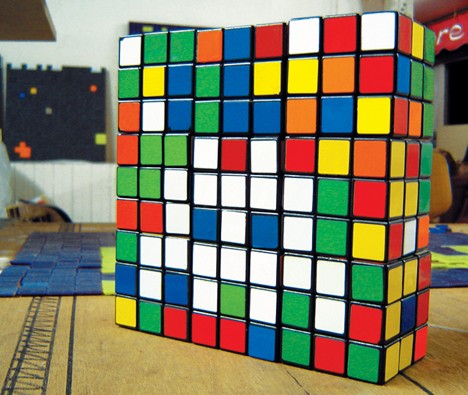 As the above angled photo shows, it doesn’t take many Rubik’s Cubes to form a simple representation of an 8-bit video game character – in this case, just nine. You’re probably thinking what Invader was thinking back in ’05… with more Rubik’s Cubes, more complex and detailed images could be formed. 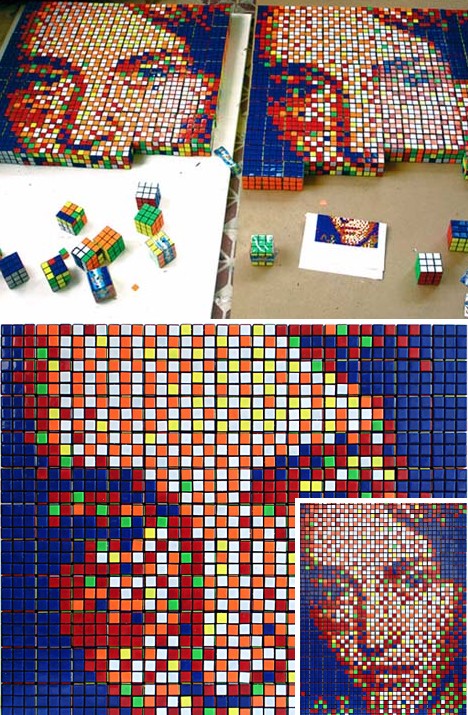 (images via: Space_Invaders and The Frisky)

The above image of student anarchist Florence Rey is shown both in-progress and completed (above, lower right). As can be seen, the image used a Polaroid instant photo of Rey as its source. Rubik’s Cubes were then twisted into the proper sequence of pixels and then affixed to a backing board. Invader needed a total of 221 Rubik’s Cubes to complete the Rubikcubism work in late 2005. 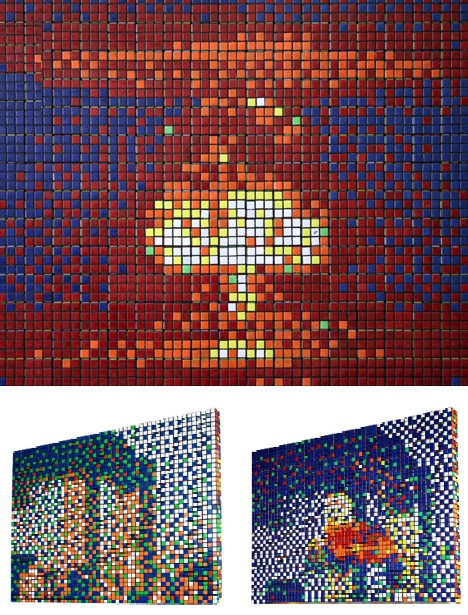 Even complex images with wide variation in color, shade and intensity can be successfully rendered using Rubikcubism but as always, the more cubes (and thus, more pixels), the more detail which can be rendered. The above Atomic Bomb blast took 294 Rubik’s Cubes to create and the six colors of the basic Cube (red, orange, yellow, white, green, and blue) were sufficient to capture and display the image. 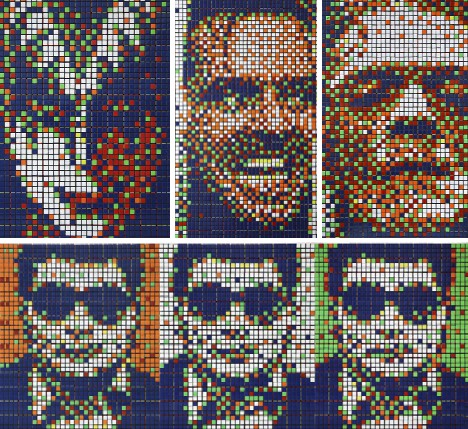 Although most any image can be represented with properly prepared Rubik’s Cubes, faces – especially familiar ones – spark recognition much faster. Our brains are hard-wired to perceive faces in less than ideal conditions; forming them from Rubik’s Cubes allows for the same effect, regardless of the fact that both the Rubik’s Cube and 8-bit animation are both less than 40 years old. Just in case their names are overly elusive, from the top left: Gene Simmons of KISS, Jack Nicholson in the film The Shining, and Frankenstein. Below is a Rubikcubism triptych of notorious terrorist Carlos the Jackal. 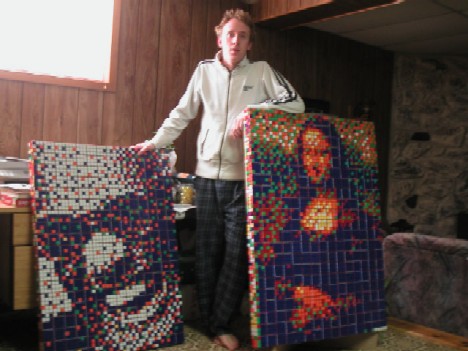 Rubikcubism isn’t Invader’s sole artistic niche, not is he the only artist creating pictorial folk art from the ubiquitous geek icon. Robbie McKinnon (above), an electrician from Toronto, Canada, created much of his so-called Cube Works in the late 2000s and has, at last word, moved on to other forms of visual expressive art. 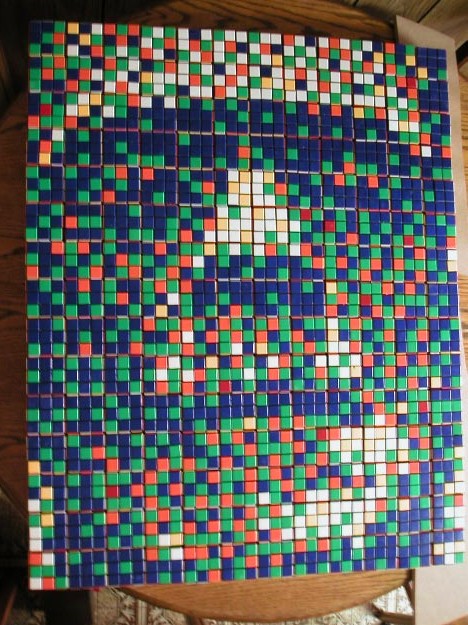 McKinnon’s version of Frankenstein, above, shows many similarities and some differences to Invader’s portrayal of the classic Hollywood movie monster. 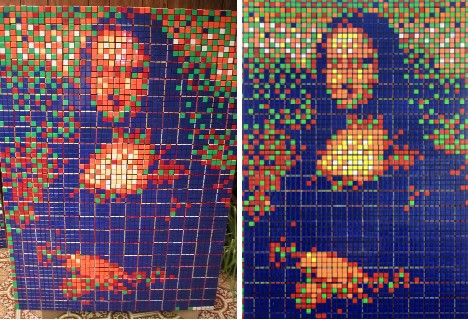 (images via: Torontoist and Space_Invaders)

Here are versions of Leonardo da Vinci’s Mona Lisa side by side, above: McKinnon’s on the left used 315 Rubik’s Cubes, Invader’s on the right used 330. Curiously, the artists use different techniques to create what appear to be astonishingly similar end results. McKinnon uses Photoshop to pixilate his source images, then manipulates the individual Rubik’s Cubes manually. Invader uses a computer program to dictate the exact arrangement of facets required for each Rubik’s Cube. Either way, the finished works measure about 3 by 4 feet and weigh around 80 pounds each. 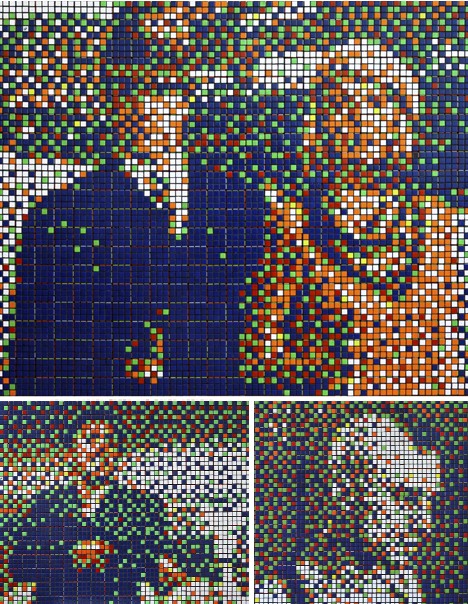 While both McKinnon and Invader have chosen, for the most part, to use Rubikcubism to put a new face on pop culture, Invader’s body of work covers more ground with a particular focus on crime, criminals and anti-heroes as depicted in films. Those above include (from top, clockwise) Warren Beatty and Faye Dunaway in 1967’s Bonnie & Clyde, Robert De Niro in 1976’s Taxi Driver and Al Pacino in 1983’s Scarface. 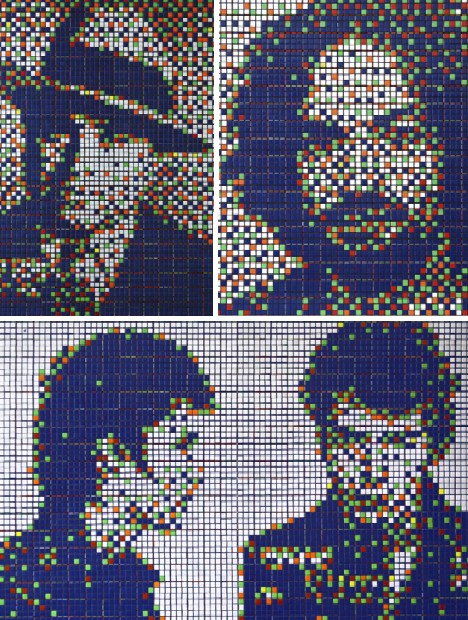 True life anti-heroes and villains are also fodder for Invader’s Rubikcubism tributes: from above top left and working clockwise, we have Al Capone, Charles Manson and the late Sex Pistols bassist Sid Vicious posing for a well-publicized mugshot. 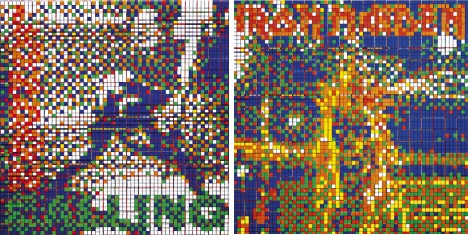 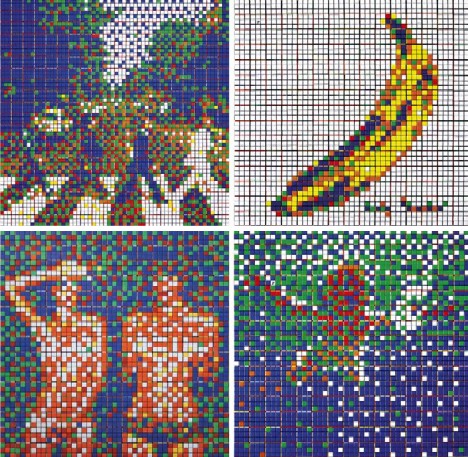 Music is an integral part of modern pop culture and that fact hasn’t escaped the attention of Invader or exhibitors like the Jonathan Levine Gallery in new York. Rubikcubism constructs of some famous album covers include, at the extreme top left to right: The Clash and Iron Maiden. Below from above upper left and moving clockwise are homages to The Beatles, The Velvet Underground, Nirvana and Roxy Music. 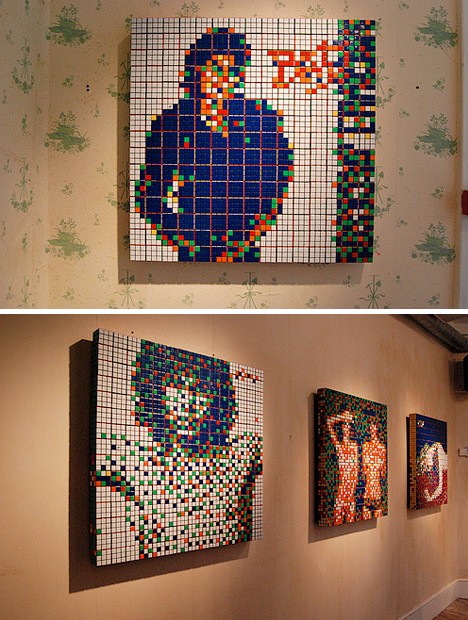 In the summer of 2009, the Lazarides Rathbone gallery in London, UK, put on an exhibition titled Low Fidelity, featuring Invader among others. Music-inspired works by Invader included Rubikcubism album covers from Michael Jackson and The Doors. 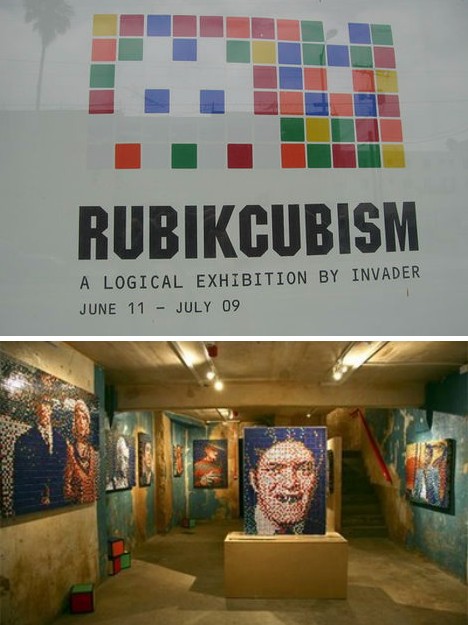 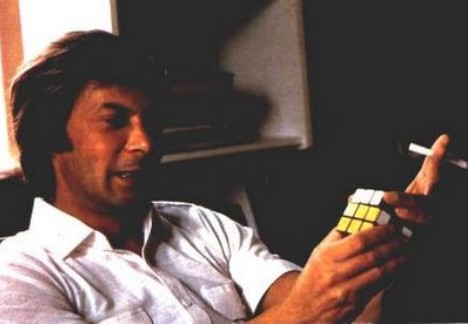 (images via: Hustler Of Culture and If It’s Hip It’s Here)

Erno Rubik invented the eponymous Rubik’s Cube back in 1974 and received his patents on the device in 1977. One wonders what he thinks of the current status of his claim to fame some 30-odd years later… well, let’s just quote him, from 2007: “I’m glad the Cube is reaching new generations, who face it with fresh wonder, curiosity and enthusiasm.” We’re glad too, Erno!