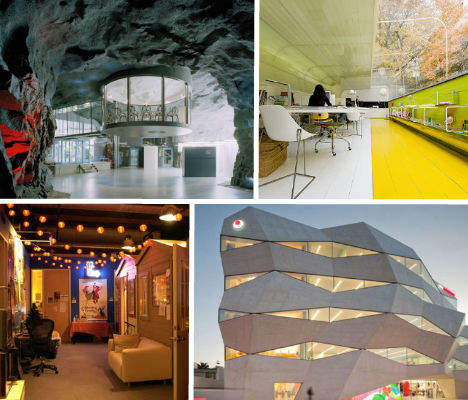 Why should office buildings be sprawling gray complexes in uninspired shapes, filled with depressing gray cubicles in which workers sit and long for a glimpse of nature? For a space so integral to a company’s most important functions, offices tend to be far too bland – but not these 12 buildings. Like a breath of fresh air in a stale room, the architecture of these structures is a welcome change, from high-energy urban penthouses to peaceful glass lookouts in the woods. 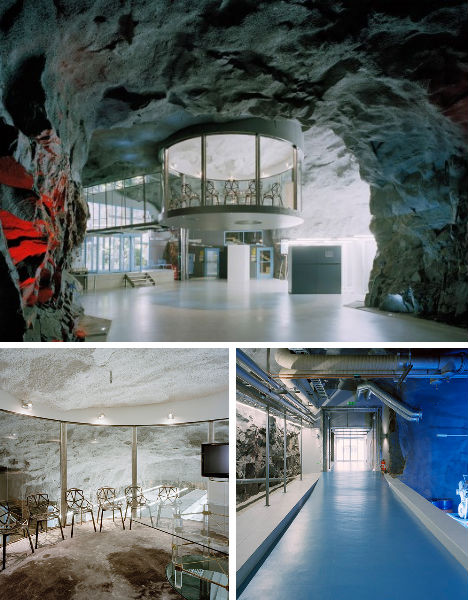 Deep underground in a former anti-atomic shelter is the White Mountain Office, a 1200-square-foot complex that exploits the jaw-dropping contrasts between raw, rustic rock faces and the sleek curvature of modern glass and steel architecture. Albert France-Lanord Architects admit that science fiction films and even James Bond served as inspiration for the office structure, saying “The client is an internet provider and the rock shelter hosts server halls and offices. The starting point of the project was to consider the rock as a living organism. The humans try to acclimate themselves to this foreign world and bring the ‘best’ elements from earth: light, plants, water and technology.” 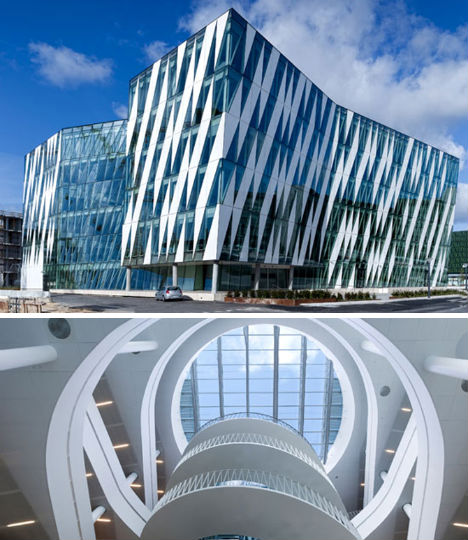 (images via: new house of art)

Based online, Saxo Bank is a financial institution for the modern age, so it makes sense that its office headquarters would be thoroughly of the 21st century, unlike many banks which were founded centuries ago and retain those old-fashioned aesthetics. Though the exterior may be a bit harsh with all of its sharp angles, the interior is softened by a towering spiral staircase that serves as its focal point. 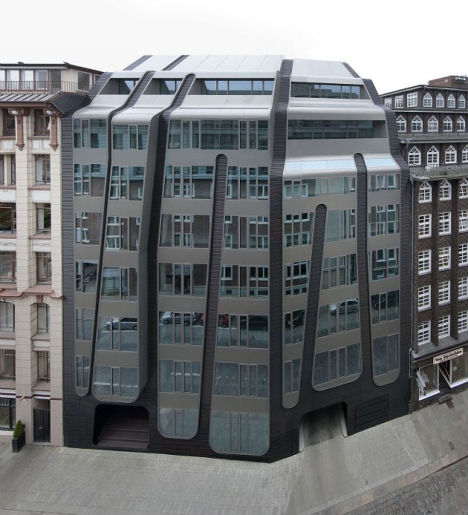 The center of old Hamburg in Germany isn’t exactly a hopping spot for ultra-modern architecture, but all the better for the somewhat bizarre Stecklehorn Office Complex, built by J.H. Mayer for Alstadt Cogiton Projeckt. The contrast between its sloping white surfaces and the aged look of the historic buildings beside it serve to make it even more eye-catching. 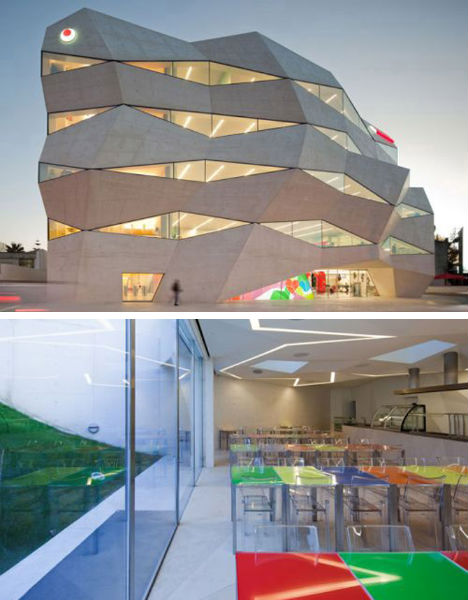 “Life in Motion” – that’s the slogan for Vodafone, one of the world’s largest communications companies, and it seems to be illustrated well in the design of their headquarters in Portugal. Like some living being that could get up at any moment and walk away, the asymmetrical building is somehow organic despite its angularity. Three of the building’s tiered floors sit beneath the ground. The architects, Barbosa & Guimaraes, say “Seeking inspiration from painting, sculpture, photography, arts which had already faced this dilemma, the office building, designed usually linear, begins to become an irregular body, out of balance, with many faces in motion.” 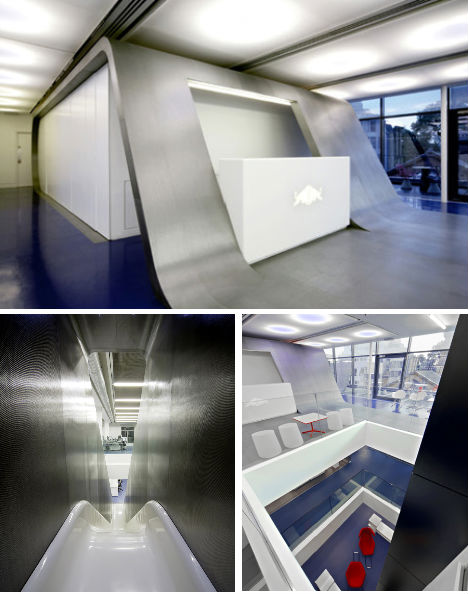 What else would you expect from the signature beverage of the hyperactive than an office building featuring a gigantic slide? Outfitted in the brand’s red, blue and silver color scheme (along with plenty of steel), the building is thoroughly modern and adult yet retains a sense of playfulness. 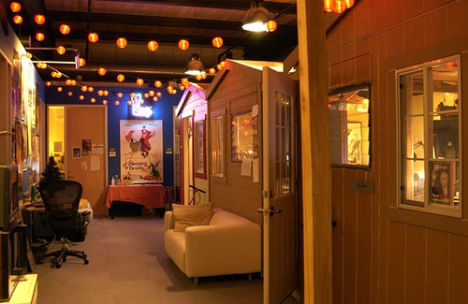 For a team as creative as Pixar, an ordinary office environment certainly won’t do. Luckily, the company provides its programmers, artists and other employees with suitably zany, colorful, personalized little ‘huts’ in lieu of cubicles. It’s almost like having your own “tiny house” inside the Pixar building, for all the privacy you need yet easy access to all the other cool features at Pixar headquarters. 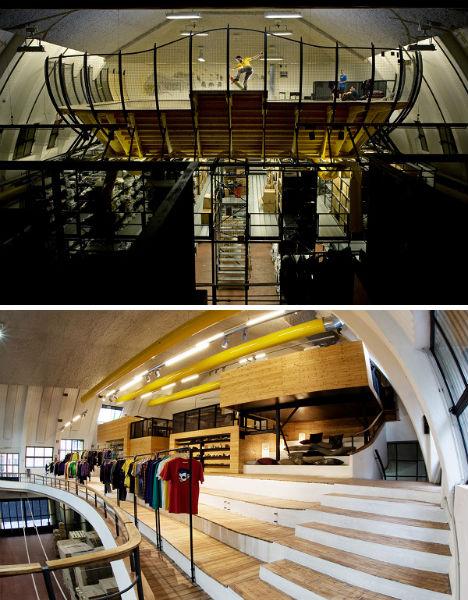 Skateboarders aren’t exactly the types to happily sit indoors in a boring office environment all day. More than likely, they’re daydreaming of spacious skate parks – which they would have right there at work if they were employees at the offices of Bastard Store, a skateboarding equipment company in Milan. The sleek and modern building features at its heart a full-size indoor skate park that hovers 18 feet above the ground. 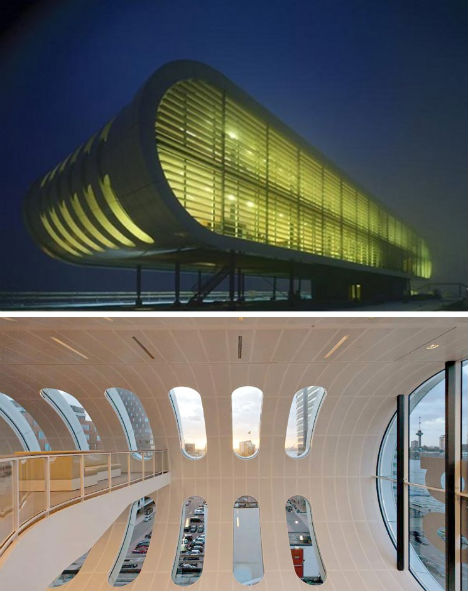 As if having a beautiful view of the river in Rotterdam weren’t enough, employees who spend their days at the Las Palmas penthouse building in the Netherlands get to do so in a structure that is a work of art in itself. Designed by Bentham Crouwel Architects, the penthouse is an elliptical-shaped add-on to the roof of the Las Palmas building, standing on 18-foot supports with a vast, open view from a giant wall of windows. Inside, the curved shape gives it the feel of an immense airplane. 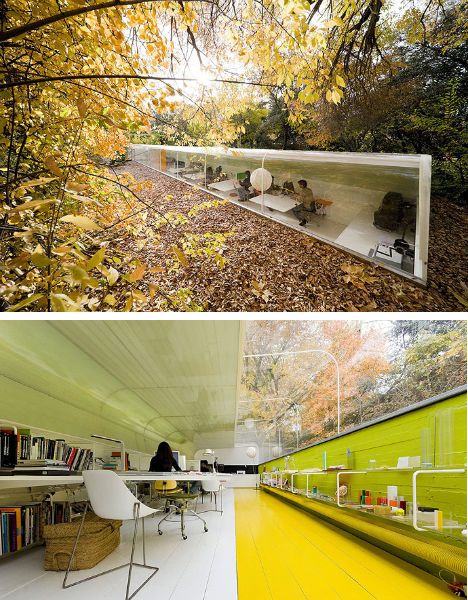 Everyone needs a window in their office so they can take a moment every now and then to gaze out at nature for a while and recharge before getting back to work. But what if half of your office building’s roof were open to the sky, framed by a canopy of trees? The Selgas Cano Architecture office building in Madrid is set partially into the ground with one side entirely transparent, giving employees the ideal inspiration to design more incredibly architectural masterpieces.

Chamber of Commerce and Industry, Slovenia 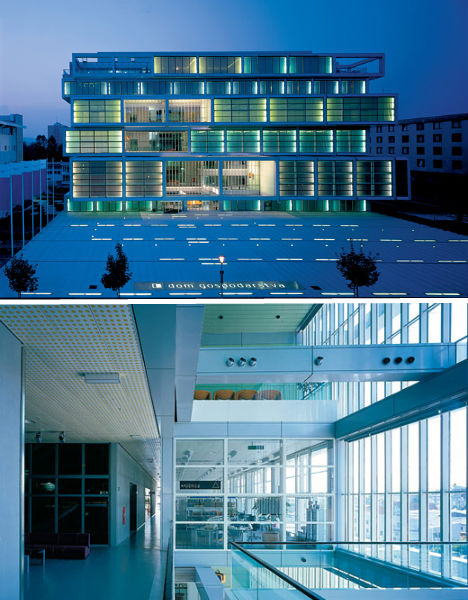 Known mostly for its old world architecture and breathtaking mountains, the Eastern European nation of Slovenia may not seem like the most obvious setting for a stunning modern building like this – but in fact, this beautiful glass structure is home to those tasked with bringing in visitors and revenue, and it certainly makes a good impression. The architects, Sadar Vuga, say “By retaining the huge public forecourt, the programme along the existing building is verticalized, thus giving it a new façade, designed like boxes piled on top of each other.” 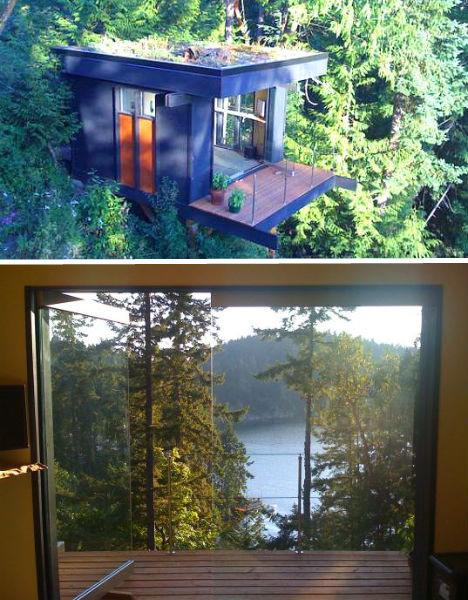 Anyone who has ever sat in a windowless cubicle for eight hours a day knows how powerful the desire to see a single green leaf can be. But imagine if this were your daily view as you accomplished your tasks at work – golden sunlight on towering trees, with a lake and a wooded hill in the background. Customer experience consultant Peter Frazier built this inspirational treetop office after decades of feeling disconnected from nature. 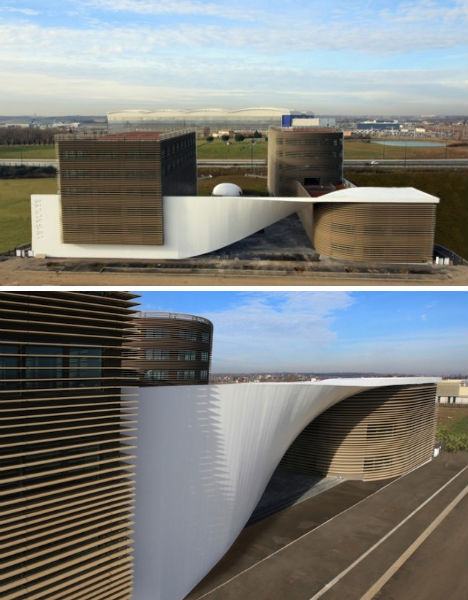 The combination of static, neutral-colored geometric shapes and a dynamic white band of concrete give the ‘Galilee’ office building near Toulouse, France a sense of hushed expectation – of precarious balance between the formal and informal, the mundane and the surprising. The slatted facade of the building is actually a sunshade that lets in plenty of natural daylight while also keeping the interior cool.