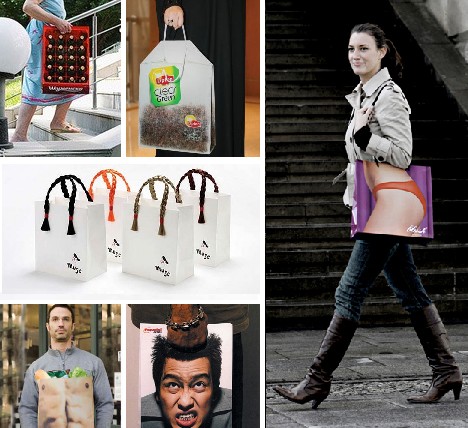 Calling all shopaholics and sacks addicts: we’ve got your fun bags right here! These 15 weird & wonderful shopping bag designs take the concept of “love handles” to a whole new level while consigning the basic, bland, brown bag to the boredom bin. 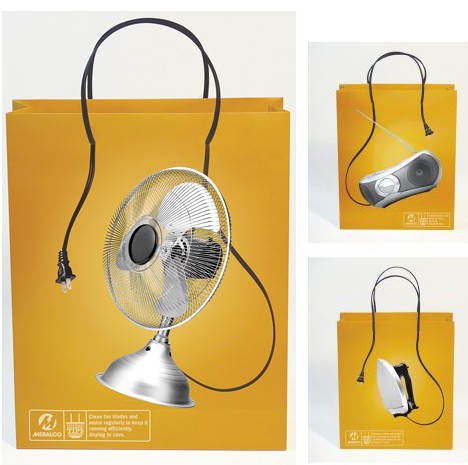 (images via: Ads Of The World)

You know those Smart Electricity Tips your power provider often includes with your monthly electric bill? The ones you glance at and then toss in the trash? Meralco (the Philippines’ leading power company) had a better idea: give away cool designer shopping bags that have “Electricitips” printed on them.

(images via: Ads Of The World) 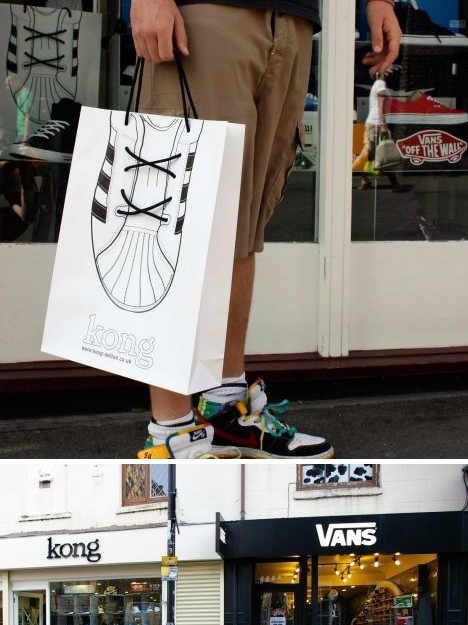 Kong Shoes wants you to remember them, any time and any lace… laces, actually. Yes, it’s the old “cinch your bag by tightening the shoelaces” trick, gets me every time. I guess that’s the idea.

Not Your Father’s Golf Bag 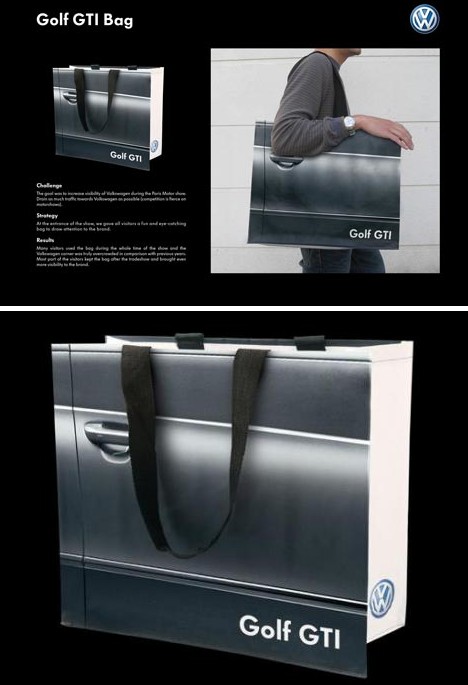 (images via: Wisdom By Woody and I Believe In Advertising)

When French advertising agency Agence V was charged with raising the visibility of the VW brand at the 2009 Paris Auto Show, they whipped up this neat shoulder bag that displays part of the door from a Volkswagen Golf GTI, then gave out free bags to everyone who attended the show. 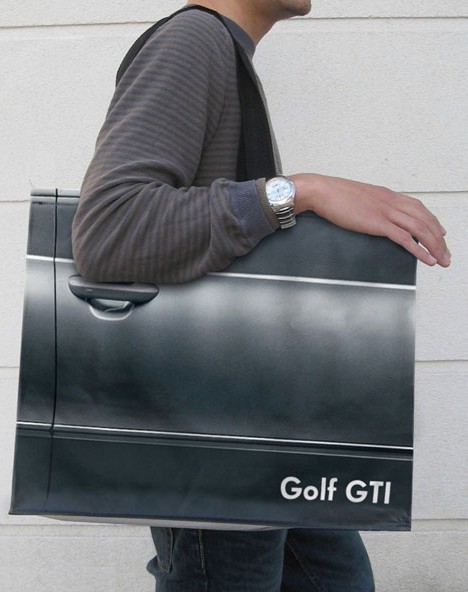 Not only was traffic at the VW booth noticeably higher, show-goers took the versatile bags home with them, thereby spreading the VW brand long after the auto show ended.

Bags Under Your Eyes? 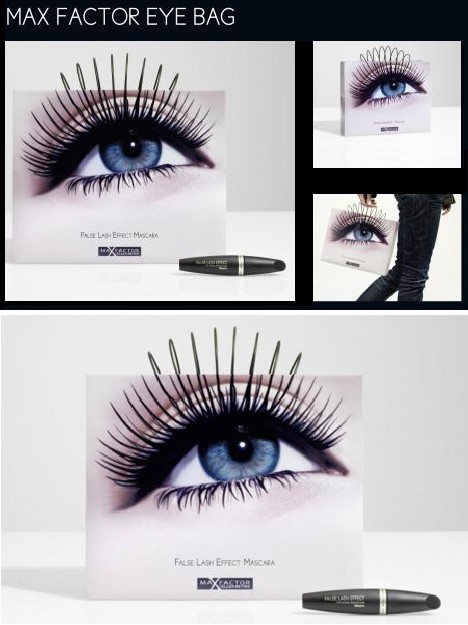 The somewhat disturbing “Eye Bag” was conceived and created in 2009 by the Leo Burnett Frankfurt advertising agency to help promote Max Factor False Lash Effect Mascara. The cute yet creepy bags were distributed to customers at selected department stores and included a free sample of the mascara inside. 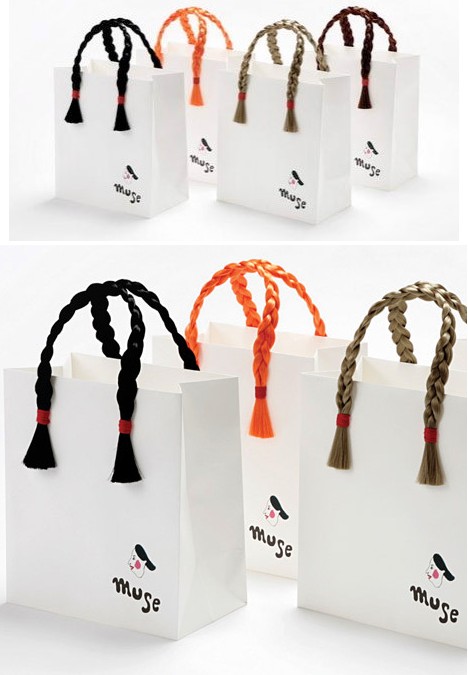 (images via: This Next and AdGoodness)

The Muse Beauty Salon (c/o Tokyu Agency Inc., Tokyo) has come up with an ingenious alternate use for those twisted and braided samples of dyed hair commonly displayed at the hair dye rack. Maybe “twisted” cuts a little too close to the bone, but carrying ANYTHING by its hair just seems a little odd. On the other hand, it’s so easy a cave man can do it.

(images via: ThinkAboutIt and Humor.com)

Former Ukrainian Prime Minister Yulia Tymoshenko‘s claim to (fashion) fame was her trademark golden hair braid. At least, it’s better than being known as the “Gas Princess”. In any case, someone with mad photoshop skills decided her crowning glory could be put to a more prosaic use – carrying a load of perogies, perhaps?

Bags To Make You Blush 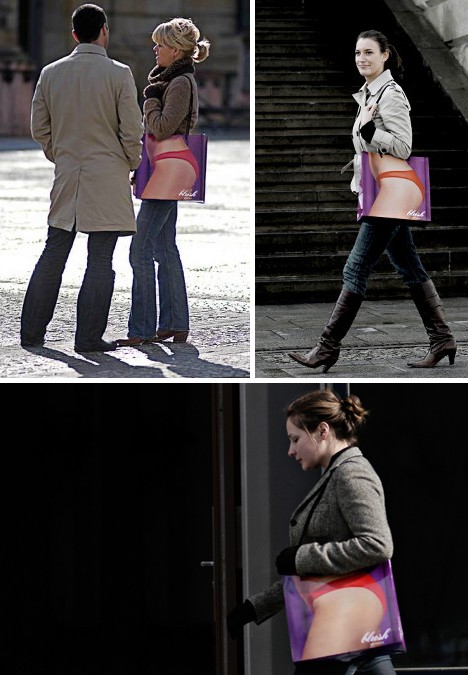 So you’re a lingerie store in the heart of Berlin, Germany, and you want to show the general public how nice your lingerie is – by showing how nice it would look on your customers. That’s the challenge thrown down by Blush, the Berlin lingerie store, to ad agency BBDO. We think BBDO did a great job if the photos above are any indication. Then again, we haven’t seen photos of Hubbies or grandmothers carrying the bags – danke schoen! 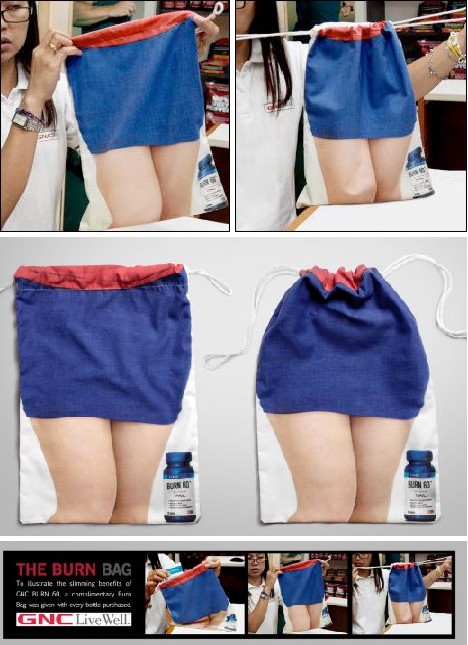 This cleverly designed bag – called the “Burn Bag” – was used in the Philippines to advertise GNC‘s Burn 60 fat-burning supplement. If only it were that easy to shrink your waist a few inches… which seems to be the message GNC’s trying to tell you.

LIFE (Or Other Magazines) Behind The Burka 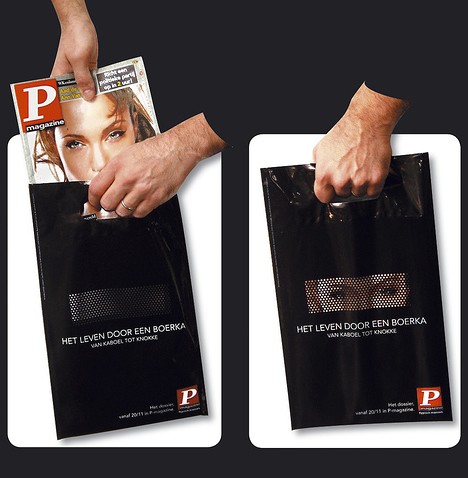 When P Magazine from Belgium wanted to get people thinking of what life behind the burka was like, they came up with this clever shopping bag that burka-izes the beauties featured on their magazine covers. 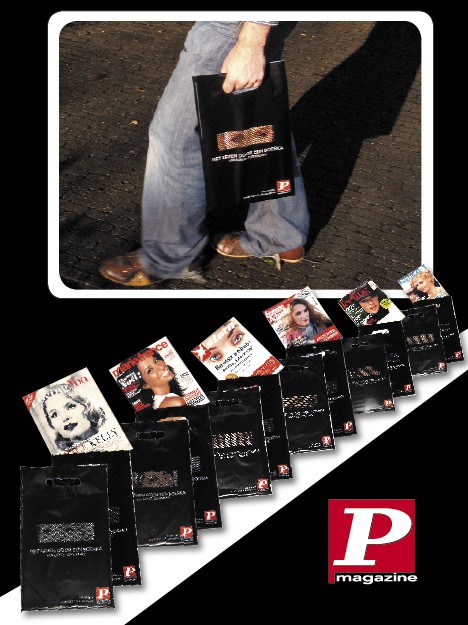 The idea for the Burka Bag grew out of an article in P Magazine about the daily life of women in Afghanistan, where wearing a burka is commonplace. The magazine commissioned over 100.000 black bags designed with a burka cutout at the level where most standard-size magazines show the eyes of their cover girls. Indeed, as the above image shows, most any magazine featuring a full cover shot of a woman can get burka’d by being bagged.

Shop Until You Drop 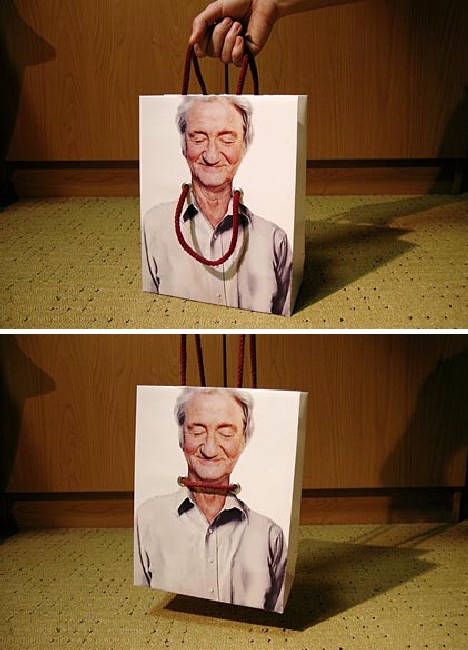 Graphic artist Antje Gerwien treads a fine line between groovy and grotesque, the the above bag designs illustrate so well. According to ReVital, who commissioned Gerwien to create the bag design, the intent was to “focus on putting the demographic curve back to normal”. We see… so, are we there yet?

The Choice Of Teabaggers Everywhere 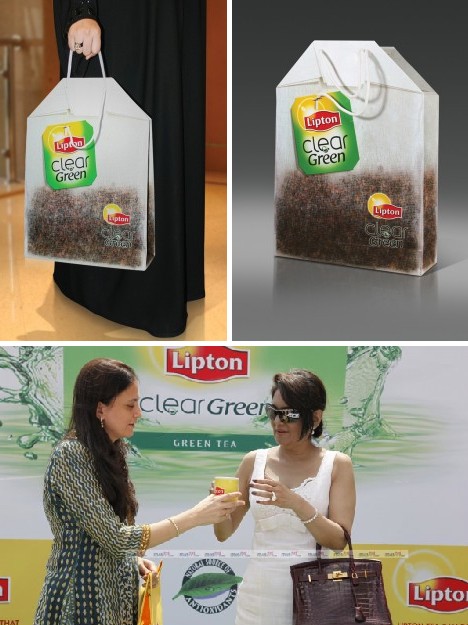 (images via: I Believe In Advertising and Mastione) 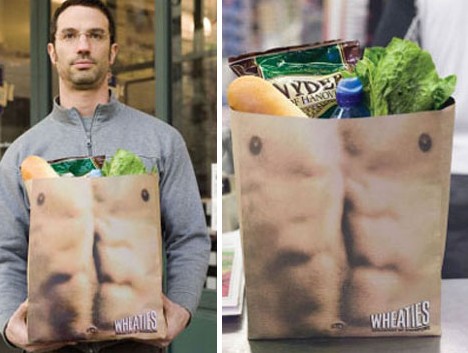 Wheaties, more than most breakfast cereals, has always striven to break new ground in attention-grabbing advertising. The “six-pack abs” bags above are a prime example. Lift a few full Wheaties shopping bags on a regular basis and you, too, could look like a champion! 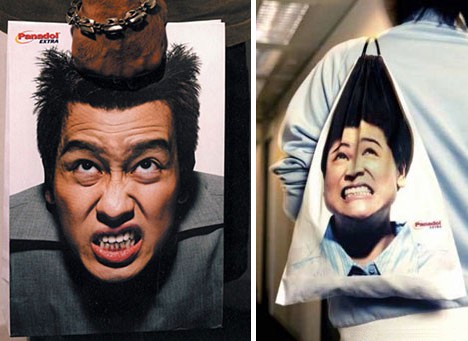 Panadol wants to be what you grab when you’ve got a headache, so they whipped up a series of excruciating ad bags to bring that fact to your attention. The full effect is realized when you either grab the bag by the grips (above left) or swing it by its strings.

I Wanna Hold Your Hand 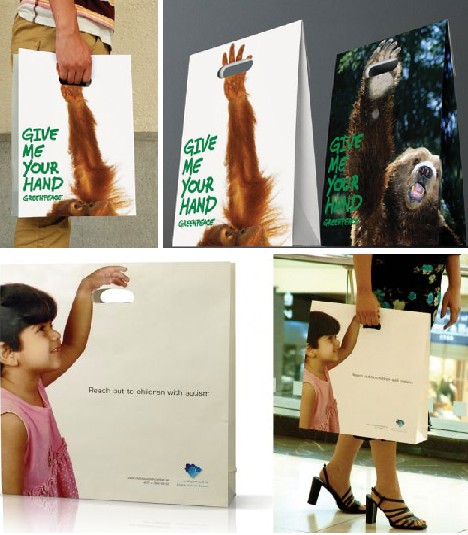 (images via: Directory Journal and Ads Of The World)

One of the classic trompe l’oeil (“deceive the eye”) techniques involves associating a real object with the image of another. The shopping bags above do just that, with an orangutan and a human child. 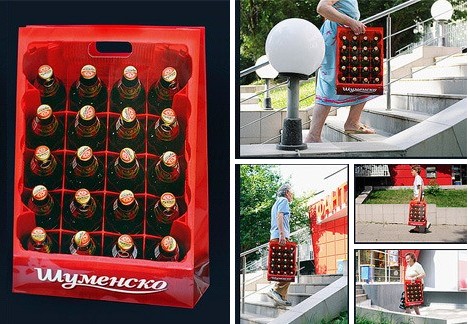 Speaking of six-packs… no need to brown-bag your bottles anymore, thanks to this graphic bag that literally has nothing to hide. Designed to advertise Shumensko, a Bulgarian beer, this bag comes in handy when you need to tote anything beer-related or otherwise – there’s an otherwise? 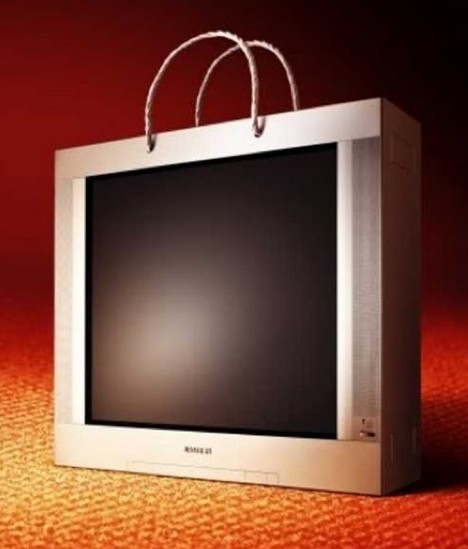 With the use of shopping bags as advertising media on the upswing, one wonders how long before we’ll see bags featuring flexible OLED screens showing video ads and commercials. We’re guessing it won’t be long… can you handle it?