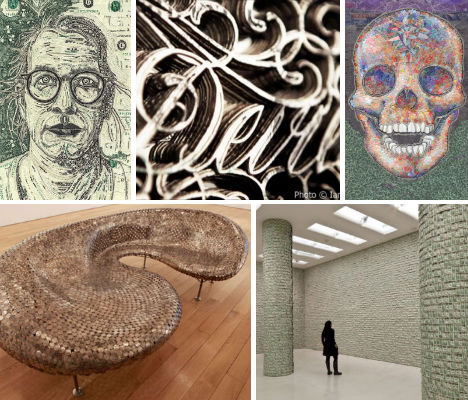 Money art, including sculptures and collages made of coins or paper cash, proves that currency can be worth even more than its face value. These 32 works by 14 (more) artists were created by welding coins together, laser-cutting cash, painting on dollar bills and even just plastering an entire room with them. From stunningly detailed portraits to jaw-dropping stop-motion videos, these works of art range from social commentary to pure fun. 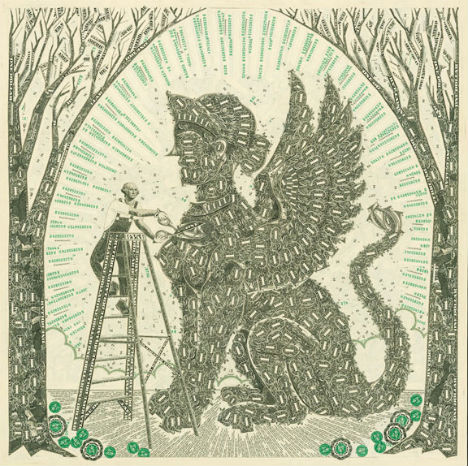 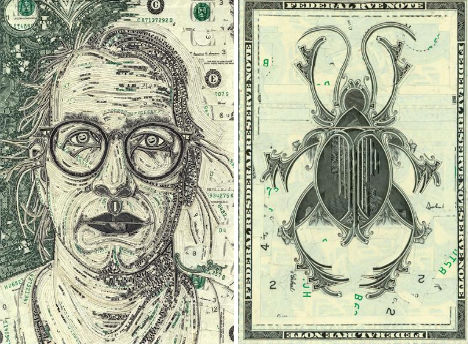 (images via: escape into life)

Swirling, intricate portraits and drawings of beetles and human anatomy are among the most awe-inspiring works of artist Mark Wagner, co-founder of the Brooklyn Artists Alliance. Says Wagner of his choice to work with currency, “The one dollar bill is the most ubiquitous piece of paper in America. Collage asks the question: what might be done to make it something else? It is a ripe material: intaglio printed on sturdy linen stock, covered in decorative filigree, and steeped in symbolism and concept. Blade and glue transform it-reproducing the effects of tapestries, paints, engravings, mosaics, and computers-striving for something bizarre, beautiful, or unbelievable . . . the foreign in the familiar.” 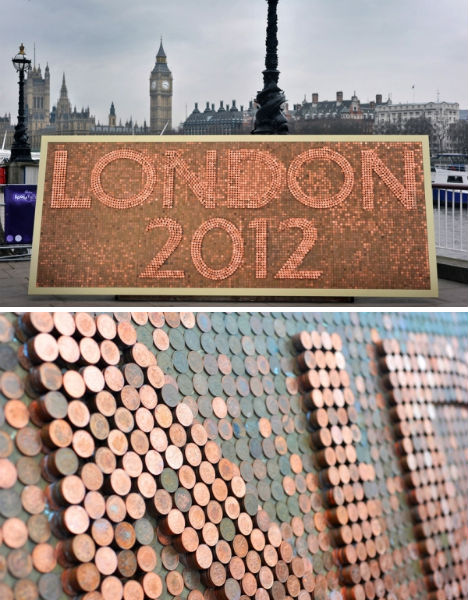 It took several 2D and 3D artists to stack 31,010 coins into an enormous ‘London 2012’ sign for Cadbury’s Race Season, a challenge to find the world’s fastest racers. UK Agency Pretty Green decided to make the process of creating this sculpture a race, too – they sought ‘the world’s fastest coin stackers’ and were able to create the sign within 5 days.

My Money, My Currency by Hanna von Goeler 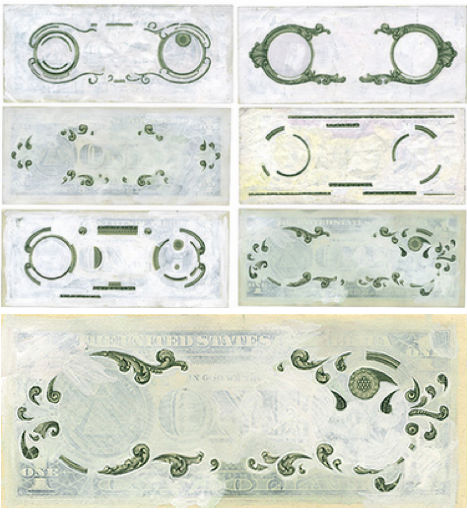 Artist Hanna von Goeler blocks out large areas on dollar bills, leaving only select details behind. Says the artist, “My currency work originated in California, while I was studying at UC Davis. I was very interested in camouflage at the time. This interest led me to create my first paintings on dollar bills, between 1992-94, in which I camouflaged/painted images onto and into bills. A death in the family led me to the east coast, and faced with the costs of living in New York City on an artist’s budget, I continued to paint on money.” 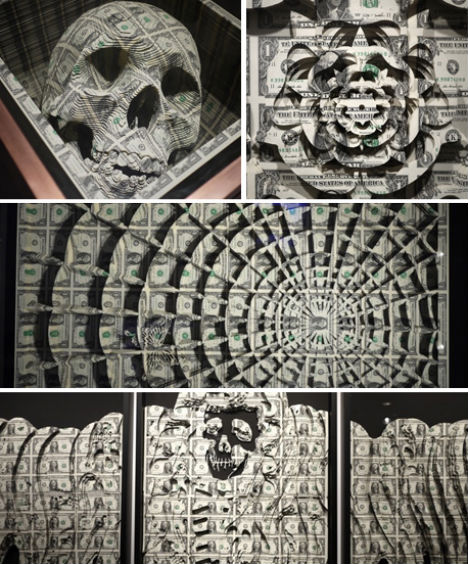 Scott Campbell’s laser-cut currency sculptures are absolutely jaw-dropping. In a 2011 exhibit called Noblesse Oblige, Campbell, a tattoo artist, cut graphic forms into stacks of cash, making a statement about privilege and the waste of money. 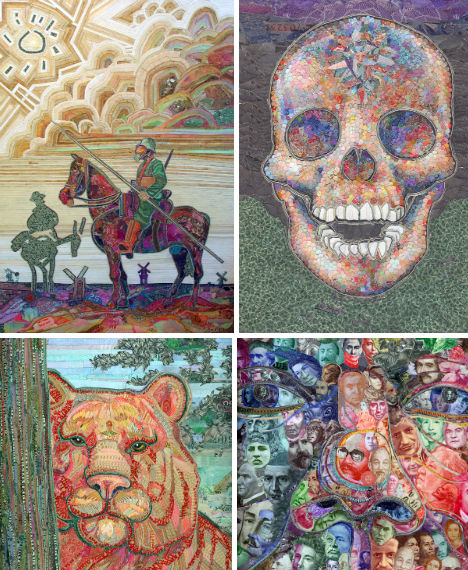 Vibrant and amazingly detailed, these currency collages by artist C.K. Wilde are made of money from around the world. They’re so colorful, it’s easy to forget that it takes untold hundreds or thousands of dollars to produce them. Says Wilde, who is also a co-founder of the Brooklyn Artists Alliance along with Mark Wagner, “Through the ages art has borne witness to the suffering that power inflicts upon the powerless. Wilhelm Worringer wrote that art is, ‘Creation in order to subdue the torment of perception.’ So while some dream and wage war, art continues to offer an alternative view – a world defined by its capacity for compassion and communion rather than destruction and death.” 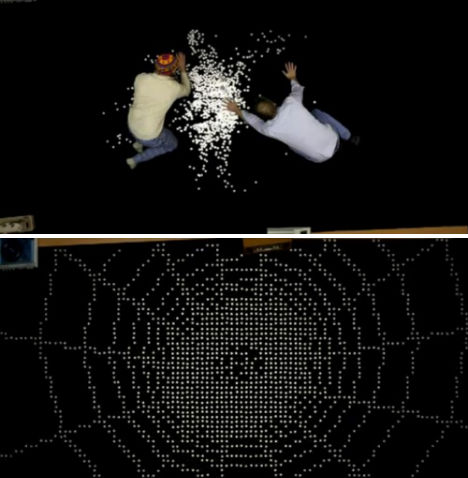 This hypnotic stop-motion animation video was created using thousands of coins against a black fabric background. The two artists work as quickly as possible, pushing the coins around on the base to form various patterns. It took about 7 weeks to complete this video. 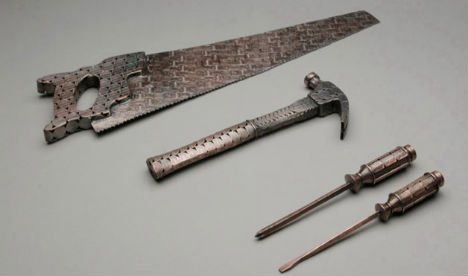 This set of carpenter’s tools, made entirely from cut and bent pennies, is just one example of the stunning coin sculptures made by artist Stacey Lee Webber. The metalsmith spends countless hours bent over coins in her studio, punching out details and using both the positive and negative cut-outs to form new objects. “Coins are more than currency, They are metal objects that hold historical tales as they are passed through the hands of millions of people on a daily basis,” Webber says. “In my artwork I have highlighted the personal history of coins by using them as a material to make art objects. I have chosen to construct objects out of pennies, quarters, nickels, dimes and foreign coins that reflect the often disregarded physical struggle the everyday blue collar laborer undergoes to earn the value of these stamped metal discs.” 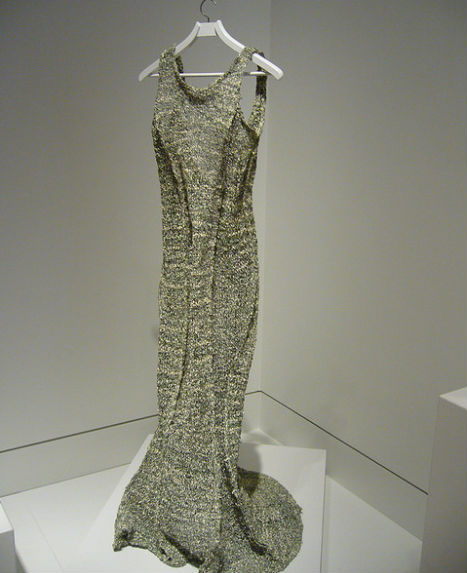 1,000 one-dollar bills were used to form ‘Money Dress’, a sculpture by Dave Cole. Cole made the bills into continuous strands and used them to knit the dress in a pattern of a Vera Wang gown. 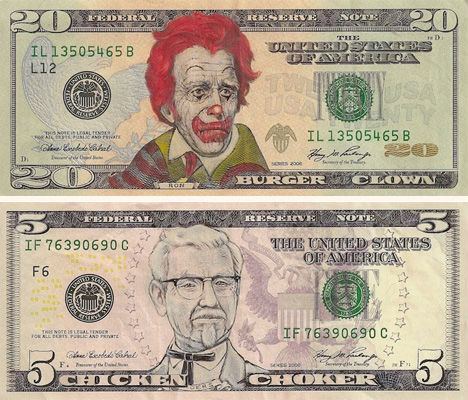 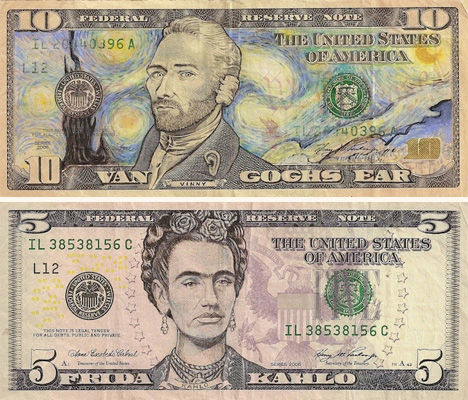 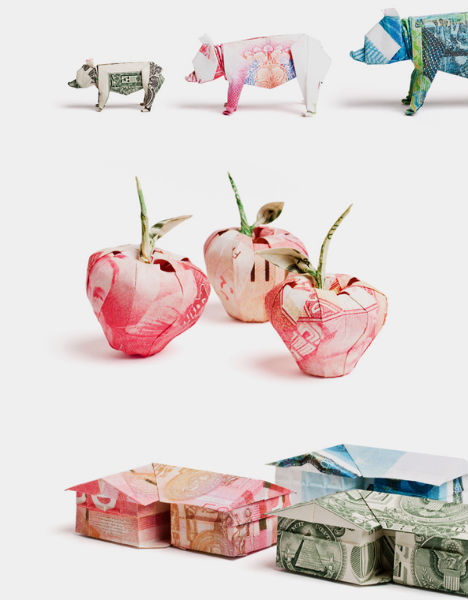 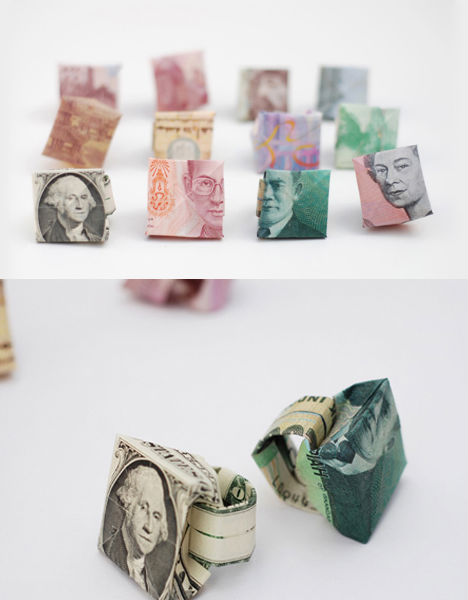 Artist Sophie Kemp wanted to give money away – but do it in an unusual fashion. “I decided to take the cold cut process of giving people money and enhance the experience of this action. I decided to take a dollar bill and use origami folds to make it into a ring as the giving of a ring has such emotional connections. I then made these rings out of 12 different currencies.” 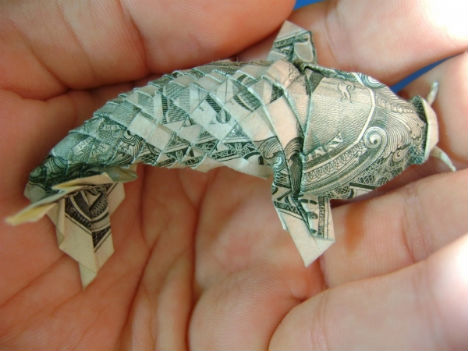 Noted currency artist Won Park came up with the design for this intricately folded origami koi fish made from a dollar bill, which was physically created by Mizu Kami. 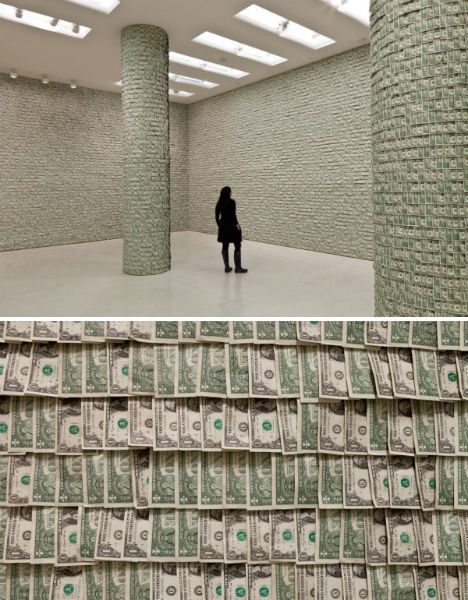 When artist Hans-Peter Feldmann won the Biennial Hugo Boss Prize, bestowed by the Solomon R. Guggenheim Foundation for achievement in contemporary art, he was awarded $100,000 and a solo exhibition at the Guggenheim. This is what he chose to do with both. 100,000 dollar bills cover the gallery walls and pillars. “I’m 70 years old, and I began making art in the ’50s,” Mr. Feldmann told the NY Times .“At that time there was no money in the art world. Money and art didn’t exist. So for me, $100,000 is very special. It’s incredible really. And I would like to show the quantity of it.”

Sofa Made of Coins by Johnny Swing 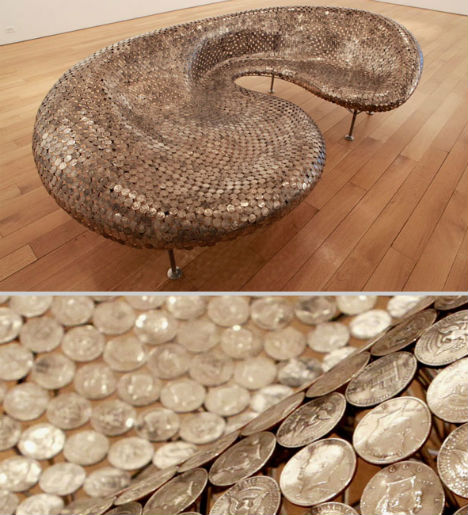 This gleaming sofa, a sculpture called ‘All the King’s Men’ by Johnny Swing, is crafted from welded coins on a steel support. It took thousands of half-dollar coins to create this 97-inch-long work of art.