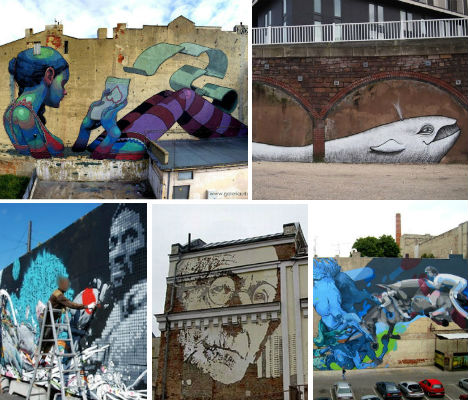 Sweeping street art enlivens super-long walls and even entire buildings with bright, fun, thought-provoking paintings and illustrations. Including works by renowned urban artists like ROA, BLU, Phlegm and Mark Jenkins, this collection of large-scale graffiti, murals and other forms of street art shows how a little creativity can turn a depressed neighborhood or unremarkable cityscape into a cultural landmark. 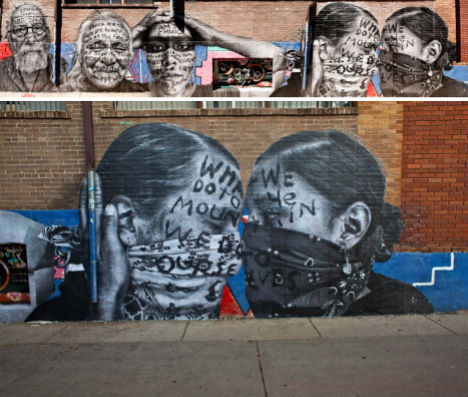 Artist Jetsonorama created this massive, beautiful mural at a Navajo Nation reservation in response to the news that an Arizona ski resort planned to use reclaimed wastewater to make artificial snow on a mountain sacred to several North American tribes. The work, entitled ‘The People Speak For Themselves’, features the words of the artists’ friends emblazoned upon illustrations of their faces. 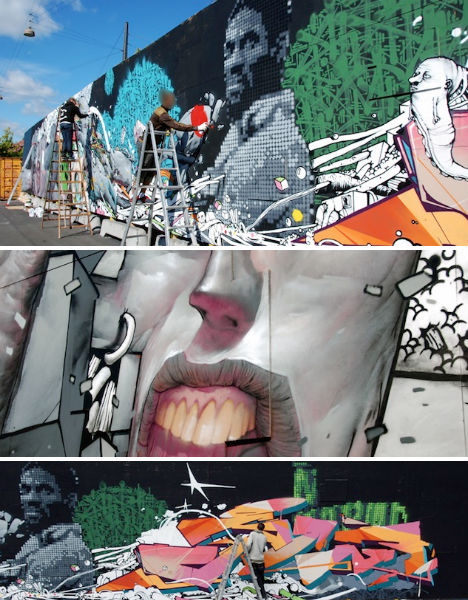 Da Mental Vaporz at Galore DK from Butterfly on Vimeo.

Da Mental Vaporz crew joined ROA and several other notable graffiti artists at Galore Festival in Copenhagen in September 2011, creating this super-long wall of work while they were there. Photographer S. Butterfly, who created the above video, says ““The mural is a satyrical reference to unscrupulous people who are willing to deface street art walls for profit. The DMV also incorporated a tribute to Kase 2 (RIP), as well as Copenhagen landmarks, including the infamous  Christiania market, where you can find anything.” Segments of the mural were painted on removable panels which were later taken to the “street art shop”. 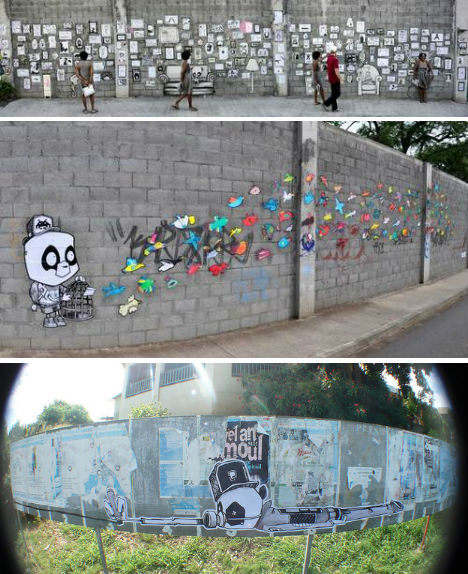 Based mostly in Paris, Panda Crew is a collaboration of four artists bringing humorous cartoonish illustrations – often featuring pandas – to the walls of the world. While the collective often shows off smaller works like sketches on its blog, they also stretch out to cover entire walls and buildings. 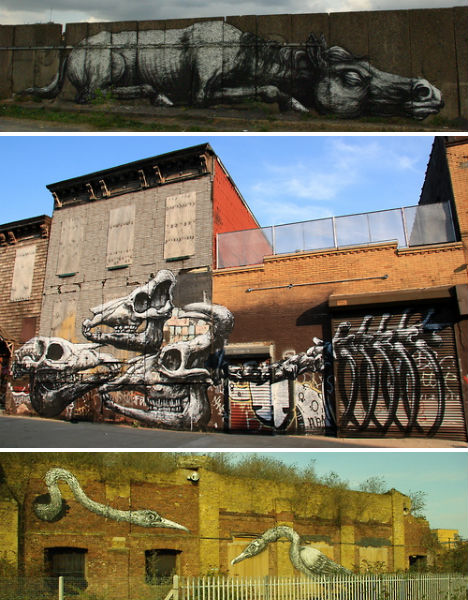 From WebUrbanist: “ROA is known for painting the dark, gritty side of nature – particularly animals that are not, to most, cute or lovable. Whether portraying rats slinking across urban surfaces, bedraggled creatures that have seen better days or the blood and guts beneath a bunny’s soft fur, ROA clearly has a soft spot for the duality of the natural world and the rich variety of creatures it contains. “For me they tell so much more about this world then any other creature, but maybe in a year I’ll only paint landscapes…” he said in an interview with FatCap.” 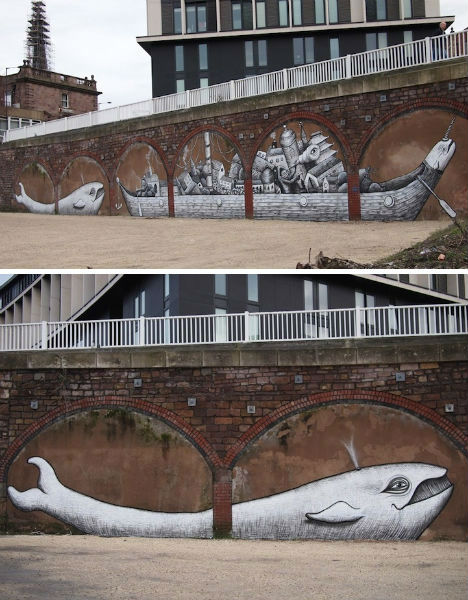 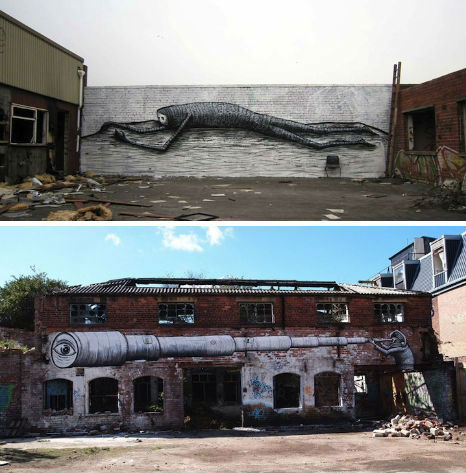 Phlegm loves to find “unloved walls” and turn them into works of urban art, often covering vast surfaces with oversized animals and his signature telescope. The UK-based artist began his street art career after being “sucked into the art machine”, preferring to work for himself. He now puts out a highly successful comic that often gets snapped up as soon as it’s printed. 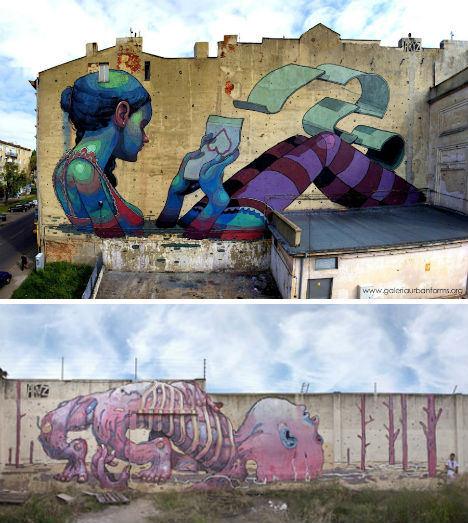 How stunning is this ultra-saturated mural covering an entire building in Lodz, Poland? Artist Aryz completed it for the annual festival Galeria Urban Forms. Artist and illustrator Aryz is from Barcelona, and his work is highly distinguishable both for its style and its eye-popping vivid colors. 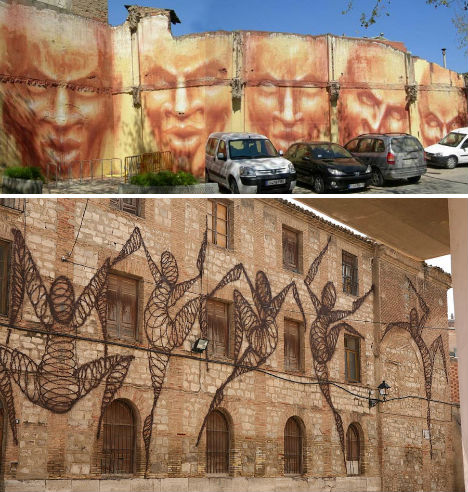 From Madrid comes Suso33, decking out buildings in Spain and other countries with leaping dancers and looming faces. The artist has a pretty amazing technique using both hands at the same time, as demonstrated in this video. 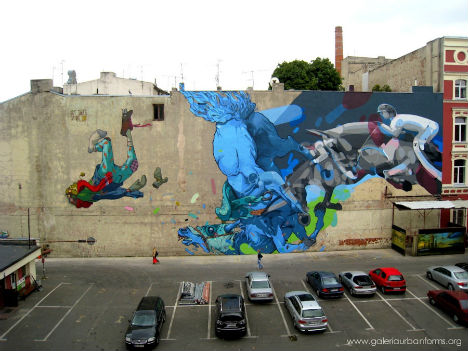 Munich’s SatOne teamed up with the ETAM Crew of Poland to create this vivid, sweeping work of art for the Galeria Urban Forms festival in Lodz. With SatOne offering a futuristic, abstract style and ETAM supplying richly colored illustrative elements, this pairing was definitely an inspired one. 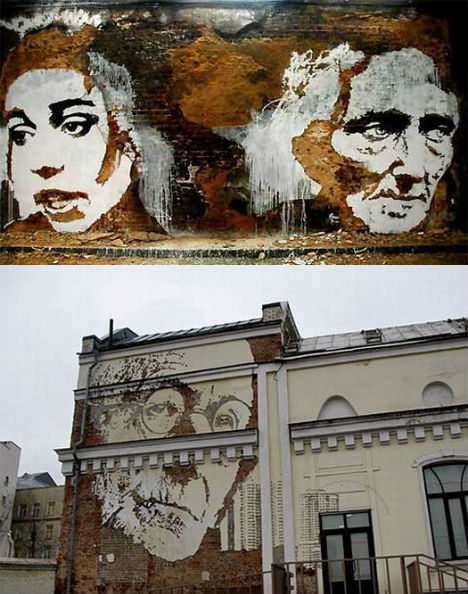 Fine art in a realistic style comes to the streets in large-scale works by Portuguese-born, London-residing artist Alexandre Farto. In one of his most lauded techniques, Farto lays down wheat-pasted paper and then scratches out the details, leaving behind the textured urban surface of the background. Farto, a.k.a. VHILS, also works with prints, billboards, metal and mixed media.. 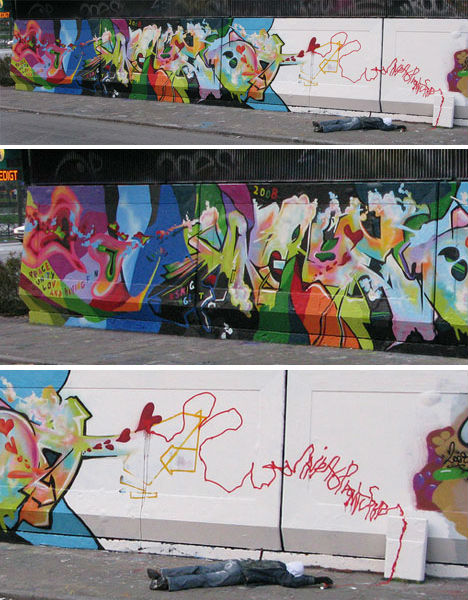 This incredible installation goes beyond an impressive panoramic work of street art, adding a rather disturbing element: the dead body of the artist that created it. Or at least, that’s what it seems like to concerned passersby before they approach the stabbed figure and realize it’s just a mannequin. Jenkins has made a name for himself not as a graffiti artist but for his thoughtful and often shocking urban installations, which are often inserted into public spaces guerilla-style. 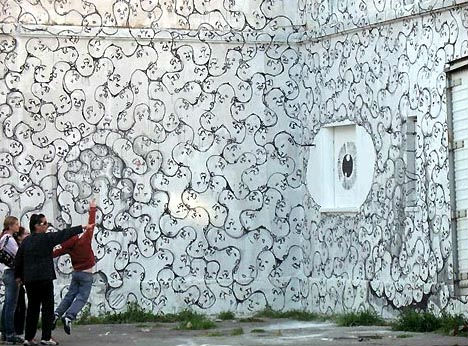 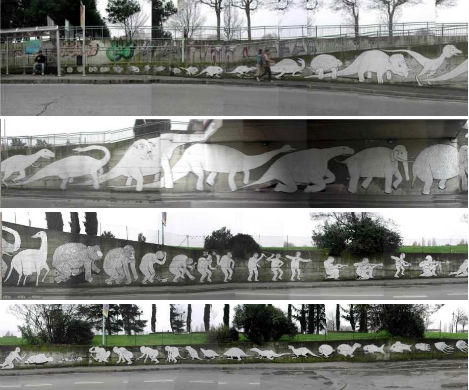 Artist BLU brings together his most famous work in a series of stop-motion graffiti animations using a large concrete wall as a canvas. The Argentinian, whose real identity has never been revealed, is known for these digital shorts and for his vast body of murals which can be found all over Central and South America, in the West Bank, London, Spain, Germany and Eastern Europe as well as in his current home country of Italy. 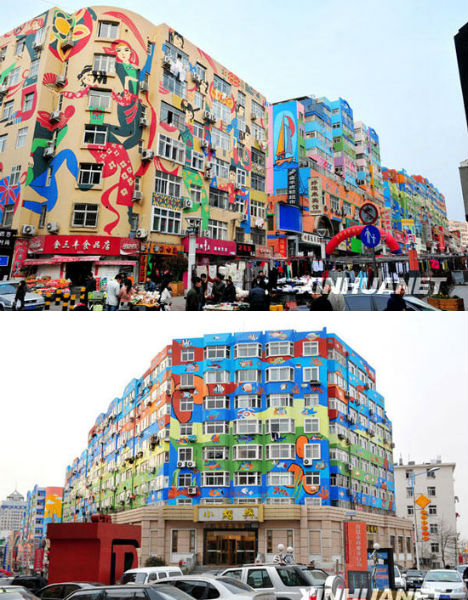 Could this be the world’s largest urban mural? A number of artists joined together to cover more than 200,000 square feet on 21 buildings in Qingdao, China’s Taidong commercial district. The work was completed in June 2008 for the Beijing Olympics.