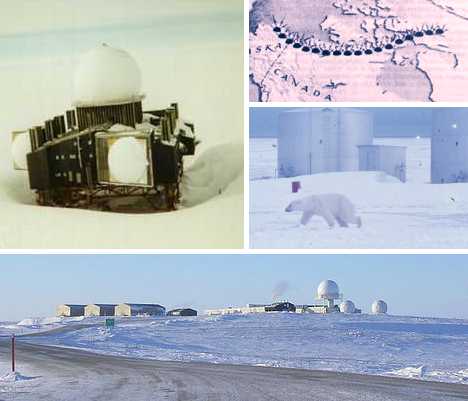 Back in the 1950s, Cold War tensions ran high and so did the DEW Line: high above the Arctic Circle, that is. Though many of the original 63 radar stations have been re-purposed or dismantled, many still remain in place, remarkably preserved by some of the coldest temperatures found outside Antarctica.

How DEW You Do? 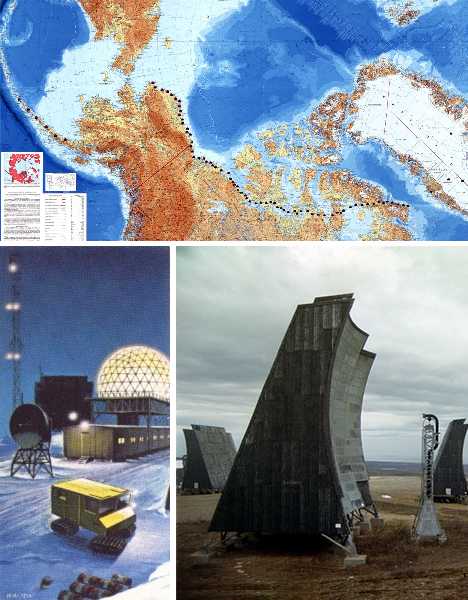 (images via: Tundra Daisy and 50before50)

The Cold War didn’t get much colder than the chain of 63 lonely radar stations strung across the 69th parallel, roughly 200 miles (300 kilometers) above the Arctic Circle. Ironically, the DEW Line was meant to function as a sort of “trip wire”, providing us with a Distant Early Warning of an impending Soviet nuclear airstrike. 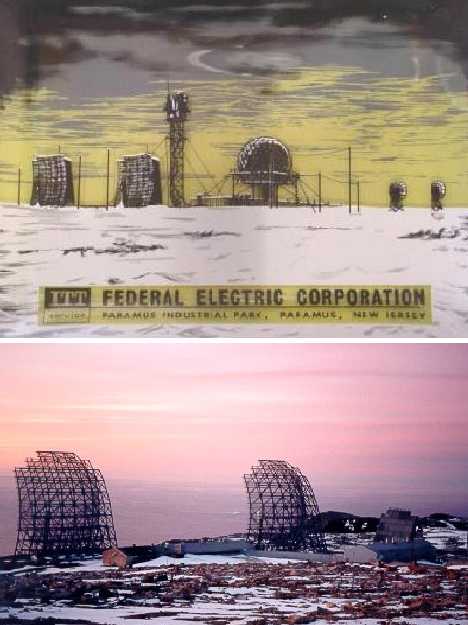 (images via: Tundra Daisy and 50before50)

Though the DEW Line was rendered mainly obsolete by the mid-1960s when speedy Soviet ICBMs supplanted slow bomber aircraft, the stations were officially kept in operation from April 15th, 1957 through to July 15th, 1993. Some of the stations were then incorporated into the DEW Line’s successor, the North Warning System or NWS; many others were left to slowly decay beneath drifting snow, howling winds and the ghostly aurora borealis. 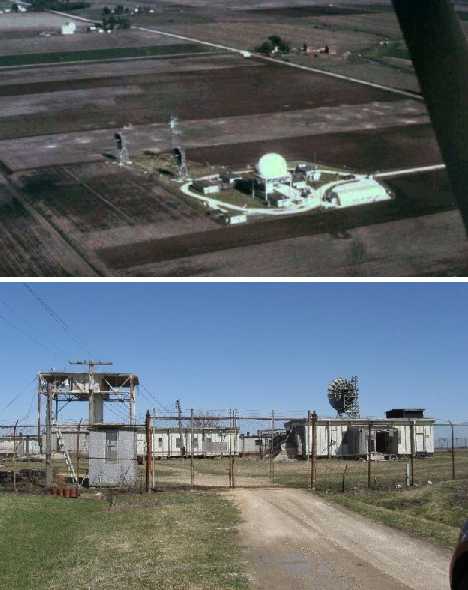 One significant DEW Line station isn’t located quite as far north as the others: northern Illinois, to be exact. A prototype station was set up in a cornfield outside Streator, Illinois, where technical functions of the radar equipment could be tested and human operators were sent to be trained. Above are views of the facility in its heyday and just below, the current remnants. 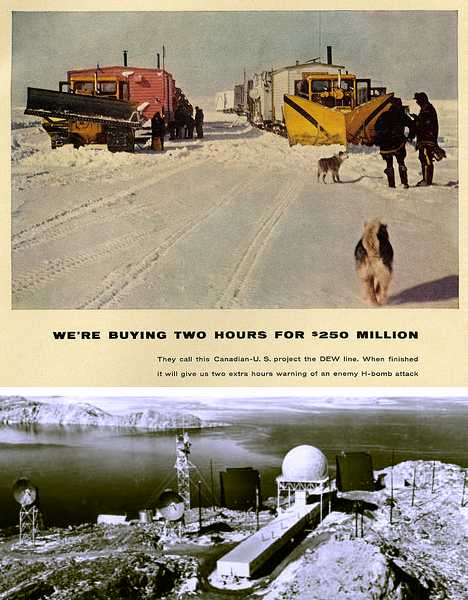 (images via: Paul Malon and WIX.com)

In late 1954 the USAF contracted the design and construction of the DEW Line stations to Western Electric, who were given until July 1957 to build 63 separate stations stretching from northwestern Alaska to the east coast of Greenland – a distance of over 6,200 miles (10,000 km). Against all odds and despite the challenge of constructing sensitive electronic installations in mostly uninhabited, prohibitively cold and nearly inaccessible locations, Western Electric handed the “keys” to the DEW Line over to the Air Force almost three months ahead of schedule. 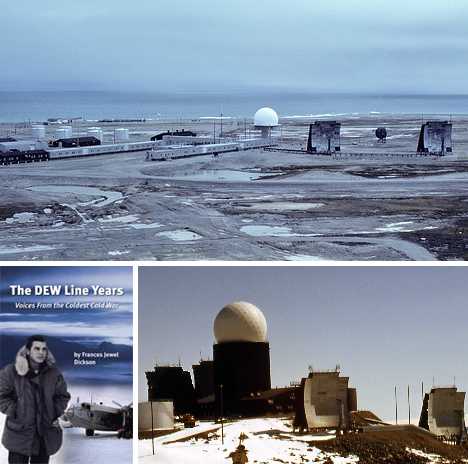 (images via: Yvon from Ottawa, WFNS and Zone Interdite)

Not all 63 stations were identical in appearance, functionality, number of on-site staff or all of the above. Some of the Auxiliary (“AUX”) and Intermediate (“I”) sites had as little as a half-dozen staff while the keystone MAIN stations housed dozens. 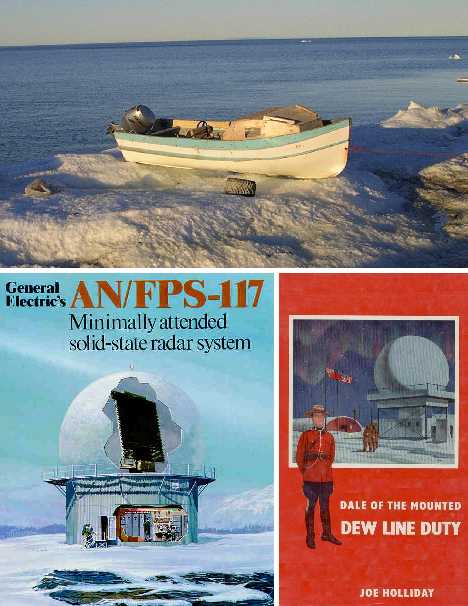 The locations of the DEW Line stations are also evocative of the High Arctic: Icy Cape, Cold Bay, Storm Hills and of course, Point Lonely. On the other hand, Hall Beach (above, top) sounds positively summery but don’t bother bringing a surfboard. 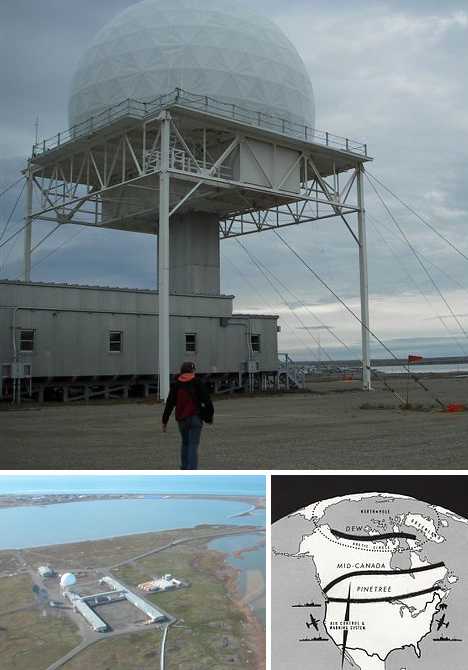 The Air Force’s relative lack of experience in arctic warfare didn’t impact on the design of the DEW Line stations, which ended up being remarkably low-maintenance facilities regardless of the main problem: drifting snow. 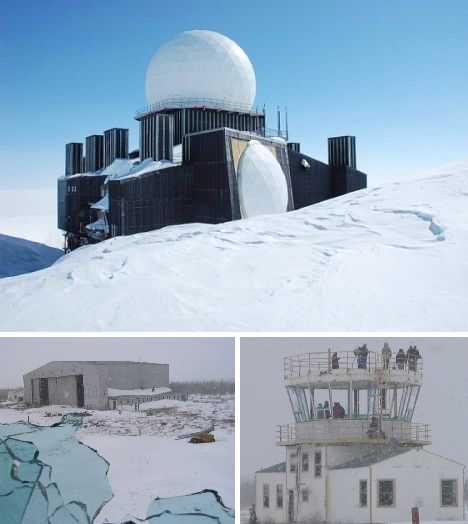 The average DEW Line station consisted of two long rows of connected metal huts for equipment and staff. The rows were laid out along the direction of the prevailing winds and parallel to one another. They were connected by a raised “bridge”, making the station itself take on the appearance of a spindly letter H. 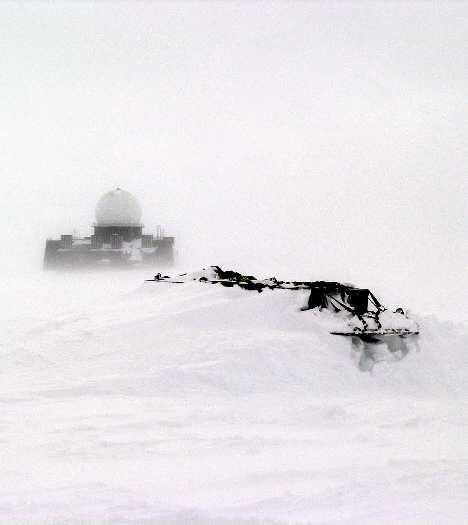 Inside one of the H’s three-sided courtyards was a round, geodesic radome that housed and protected a pair of radar dishes mounted back to back. The radome was mounted of steel stilts that raised it as much as 50 feet off the permafrost. The stations also featured other radar dishes and reflectors that facilitated communications with neighboring stations and also to command and control centers hundreds of miles to the south.

Drawing a Line in the Snow 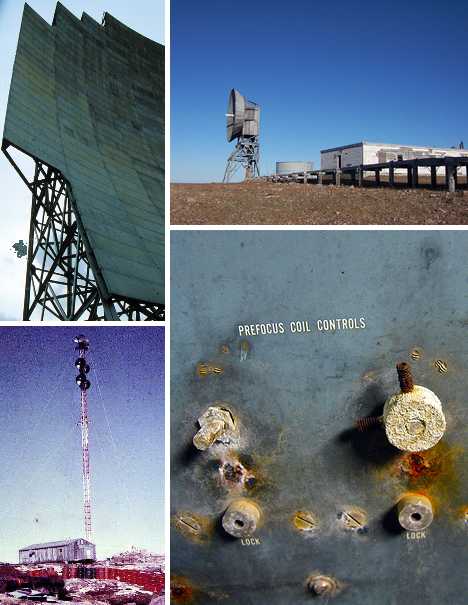 DEW Line installations were built to last; environmental concerns came last, for the most part. Asbestos insulation kept the manned modules warm, PCB lubricants ensured the radar dishes spun easily in the cold, and lead-based paint kept rust at bay. All well and good until the stations were decommissioned and their components left to decay or worse: be salvaged by local Inuit for building materials. 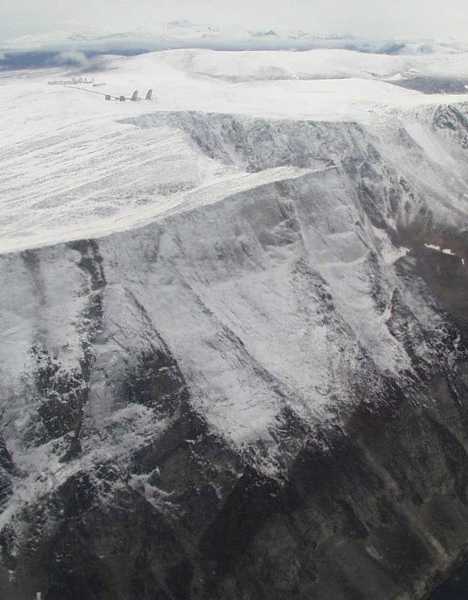 Getting equipment OUT of the High Arctic can be just as difficult, time-consuming and expensive as getting it there in the first place. How’d you like to be the guy whose job it is to dismantle the main radar station at Cape Dyer, on the rugged (to say the least: above) eastern shore of Baffin Island? 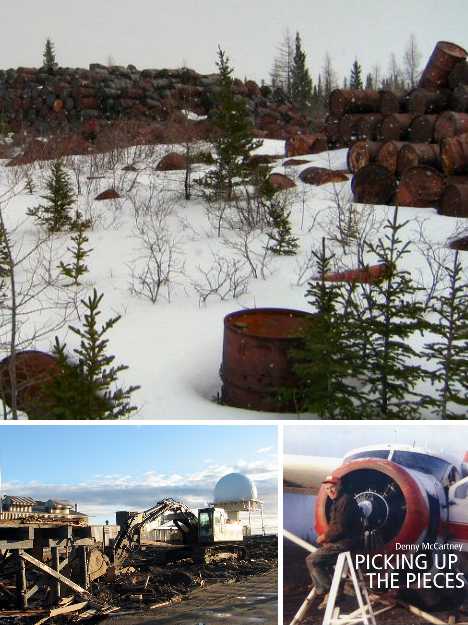 Other original DEW Line sites are more accessible but have their own issues. Take the LIZ-3 DEW Auxiliary site at Wainwright, Alaska, closed in 2007 due to soil erosion. Unlike some of the northern Canadian and Greenland sites, Wainwright can be TOO warm at times leading to subsidence of the permafrost and severe shoreline erosion unhindered by ice-free seas. 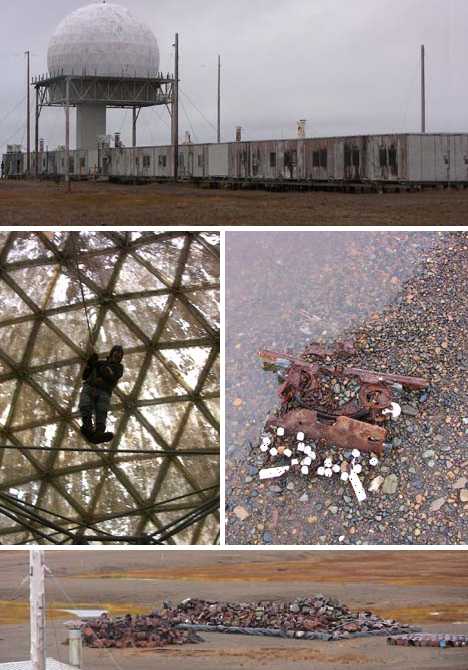 Without the preservation afforded by sub-zero temperatures, structures and equipment can decay and corrode alarmingly quickly – that’s a typewriter above right (or at least, it was). Corrosion exacerbates pollution problems as well. Most of those 55-gallon oil drums typically dumped in rusty mounds contain residual fuel and lubricants that can (and do) leach into the soil, contaminating groundwater. 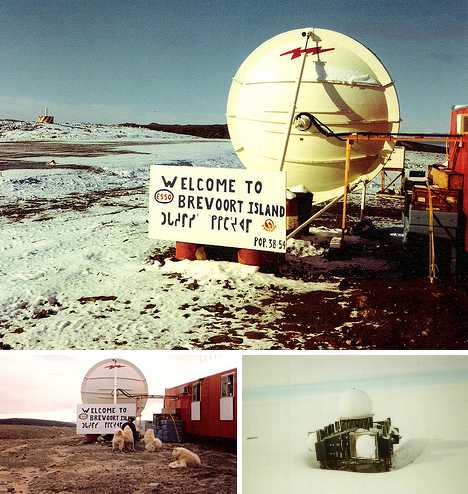 Cleanup costs skyrocketed when the realities of arctic environmental remediation became apparent and the cleanup completion date has been extended from 2011 to 2018. 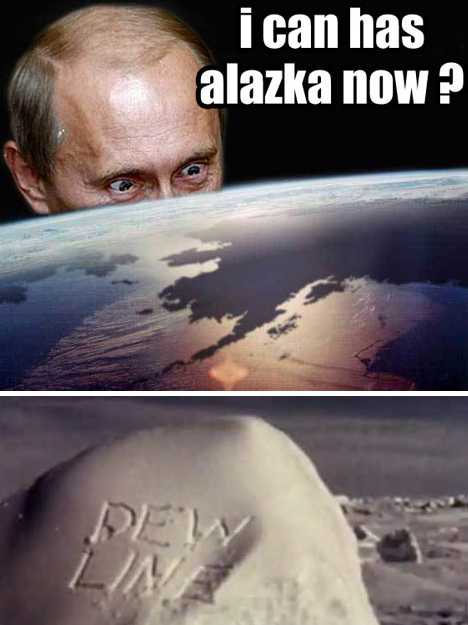 The DEW Line served a noble purpose in its heyday, drawing a line in the snow against Soviet aggression that was never crossed in anger. In doing so, the long and lonely chain of isolated radar stations forced both Americans and Canadians to see their far northern territories in a different light. With post-Soviet Russia taking a greater interest in the real roof of the world these days and Global Warming setting the stage for a scramble for arctic resources tomorrow, our erstwhile line in the snow north of 69 degrees may have been the shape of things to come.