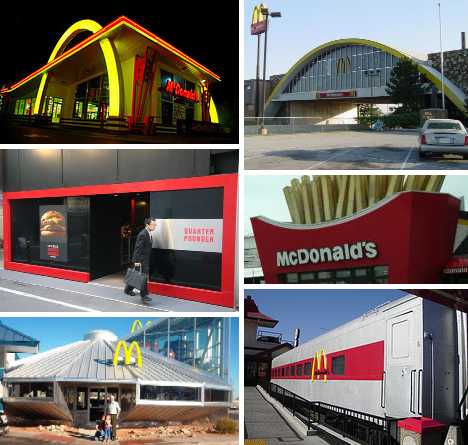 I’m livin’ it! McDonald’s might be the quintessential symbol of “fast food nation”, serving millions of burgers daily in over 100 countries worldwide. Though Mickey D’s brand identity is relentlessly homogeneous, a surprising number of its restaurants are anything but. These 10 sizzlingly odd McDonald’s restaurants show that when it comes to architectural innovation, there’s life in the old grill yet! 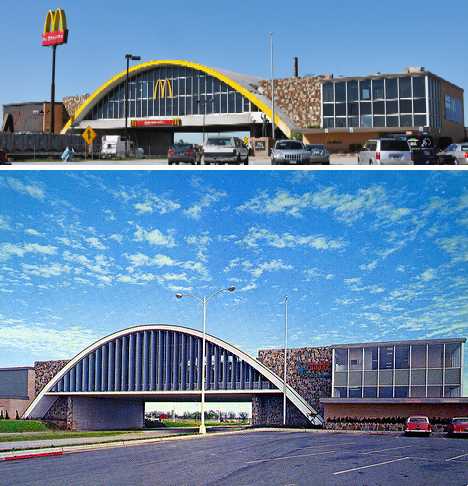 (images via: RoadsideArchitecture.com and Edge and Corner Wear)

If the “World’s Largest” McDonald’s in Vinita, Oklahoma, doesn’t fit the burger giant’s corporate mold, blame it on (or credit it to) the fact that it wasn’t always a McDonald’s location. The building dates from 1957 when it opened as the Glass House restaurant: After & Before images are above. 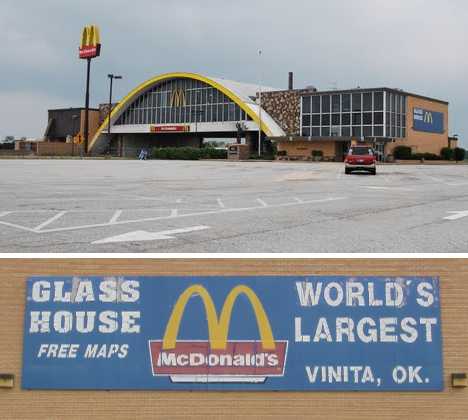 The Vinita McDonald’s doesn’t just overlook the Will Rogers Turnpike (I-44), it bridges it. Customers can enter the building from either side of the highway but be sure to remember which door you came in on. 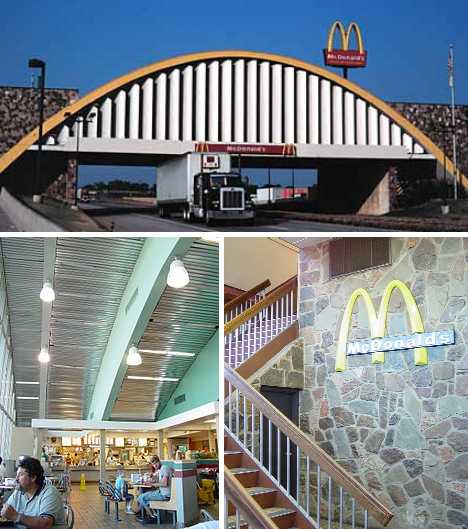 (images via: Roadside America and Wikipedia)

Once inside, don’t expect to find a stadium-sized seating area and a mile-long service counter – actually a relatively small portion of the building’s interior is devoted to buying, selling & scarfing down burgers & fries. 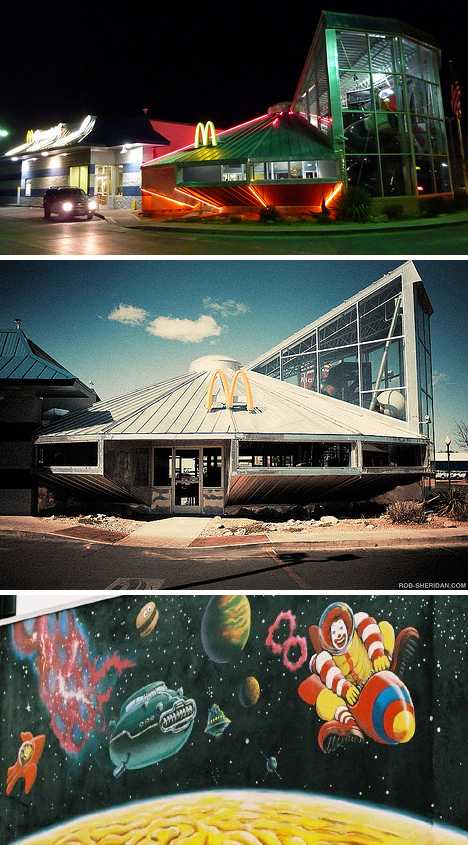 Did a flying saucer really crash land near Roswell, New Mexico in 1947… or did Ronald McDonald get there first? It’s a McChicken & Egg McMuffin type thing but however way you slice the buns, the UFO-shaped McDonald’s in downtown Roswell is simply out of this world! 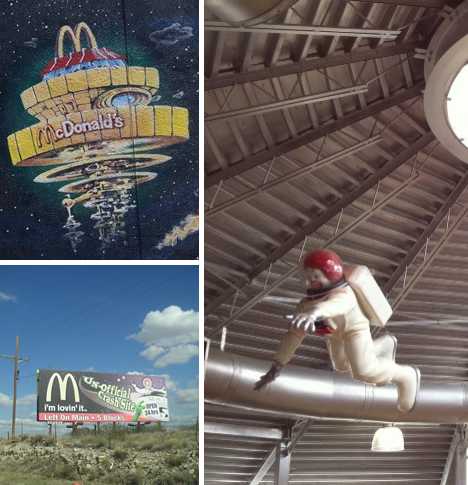 You can’t accuse Roswell’s unique McDonald’s of understating the town’s association with UFOs & space aliens, and the theme is done up to the max both inside and out – the latter via an incredible full-color mural that wraps around a good portion of the restaurant. Now if they only served Tang… 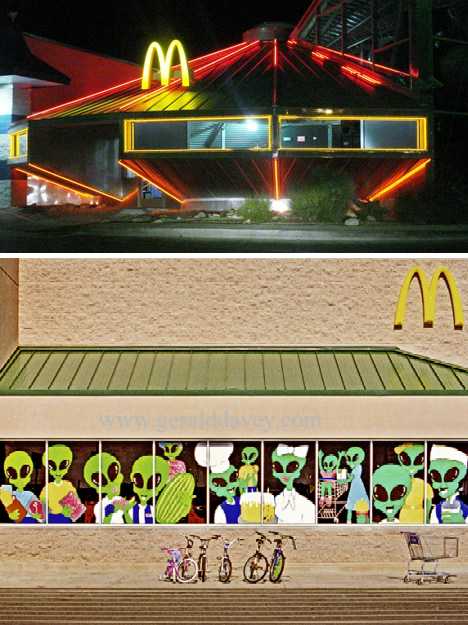 One wonders what Roswell (and its McDonald’s) would look like today had the curious and mysterious “Roswell Incident” never happened. On the other hand, should little green men actually visit today’s UFO-licious Roswell, what would they think of it? If they were planning an invasion, they’d probably assume they already won! 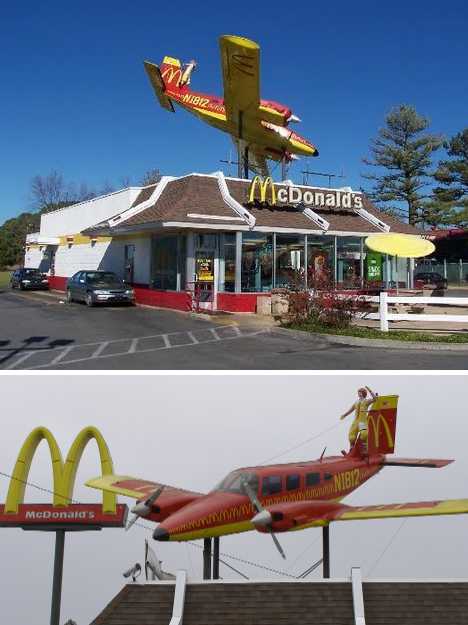 This particular McDonald’s is located just of Hwy 412 in Springdale, Arkansas, and features an aviation theme that runs from the “Air Macs – A Tribute to Aviation” lettering on the front doors to the twin-engined Piper Seneca frozen in mid-dive-bomb just above the roof. 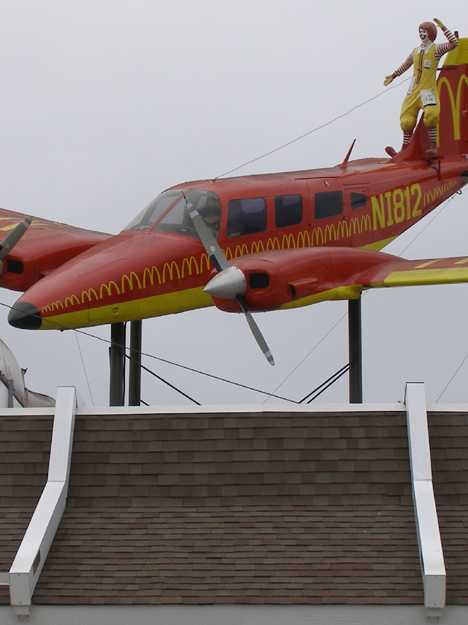 Not only is the piping-hot Piper painted up in official McD’s livery, it’s got Ronald perched on the tail barnstormer-style while the Hamburglar plays pilot… at least, it did. On on May 29, 2008, and after nearly a decade frozen in place above countless McDiners, the airplane was removed due to “liability issues” and the pending remodeling of the restaurant. 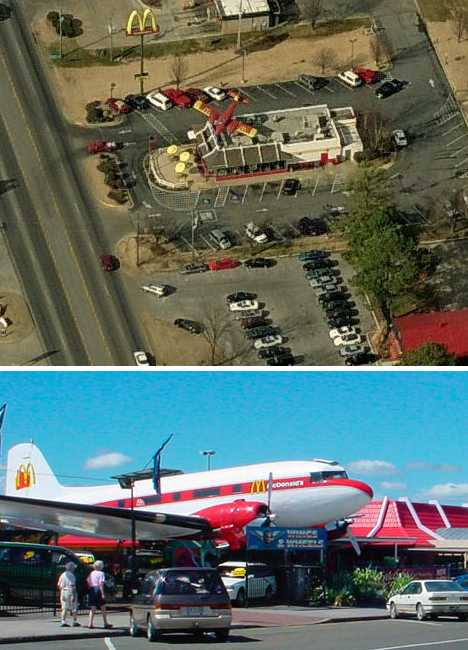 Though the Springdale McPlane has gone to meet its maker, on the opposite side of the world another former flyer now nestles its nose to the french fries fryer. Taupo, New Zealand holds the distinction of having a decommissioned DC3 grace their McDonald’s restaurant. Insert “airline food” joke here. 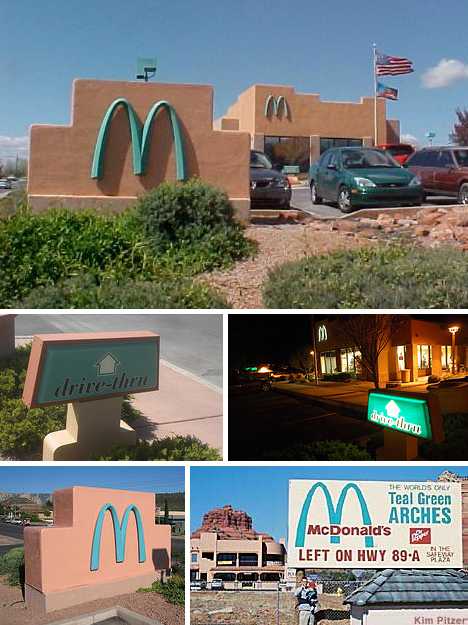 (images via: MyLot, Like the Grand Canyon, Angel_Blue, Watchmaker and Roadside America)

A McDonald’s location with green arches… no, not in Ireland! Siddown in Sedona (Arizona) for some dessert in the desert, however, and you’ll be enjoying fast food in a McDonald’s with the “world’s only Teal Green arches.”

(images via: The Adventures of Shiloh’s Traveler and Country Wings in Phoenix)

Green arches are just the start, however – teal accents highlight other signage and the building itself aspires towards an idealized dream of southwest esthetic design. No word if the Sedona McDonald’s only serves Shamrock Shakes. 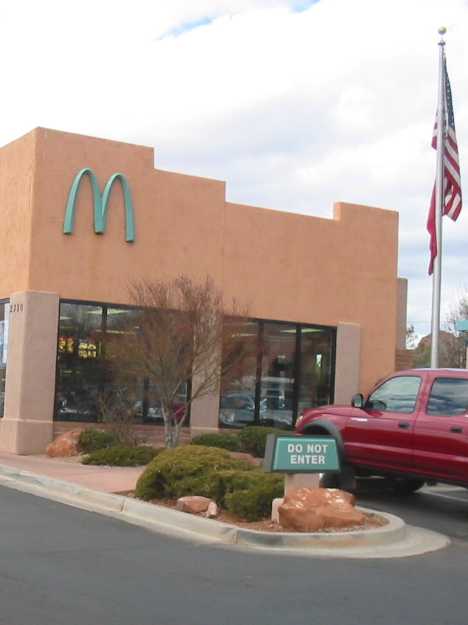 (image via: Slag’s House of Stats)

Sedona is a New Age lifestyle mecca and city authorities have striven to preserve the town’s naturalistic character. When McDonald’s applied to situate a restaurant in town, they met with significant resistance centered on their trademark Golden Arches – it seems they would clash with Sedonians’ visual sensibilities. McDonald’s was asked to select a different color for the arches and the company’s first submission, turquoise, was accepted. 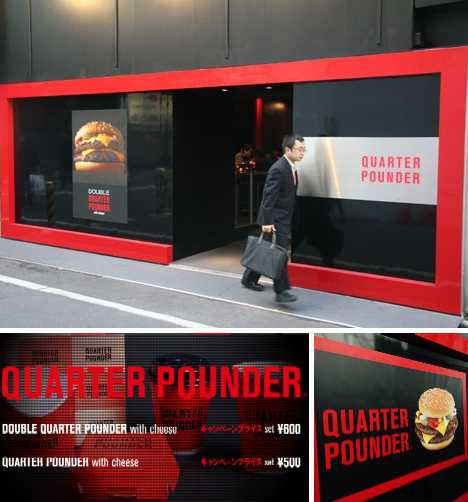 (images via: McChronicles and Imprint Talk)

With a nod to Dread Zeppelin for the title (“thank you, thank you very much”), “Quarter Pounder” was McDonald’s no-brand experiment tested on intrepid Tokyoites in 2008. 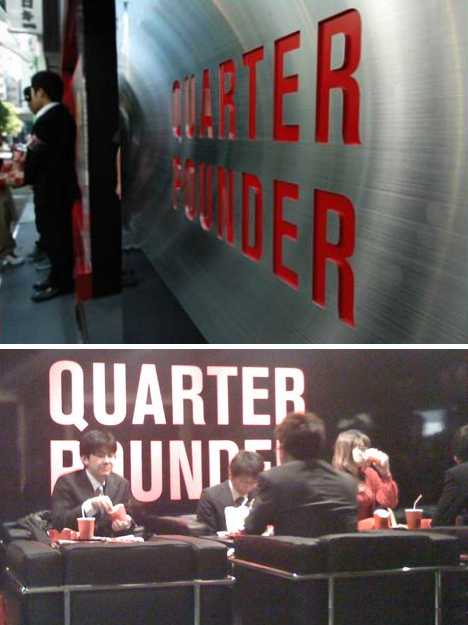 (images via: The Afterlife Epitaph and Japan Trends) 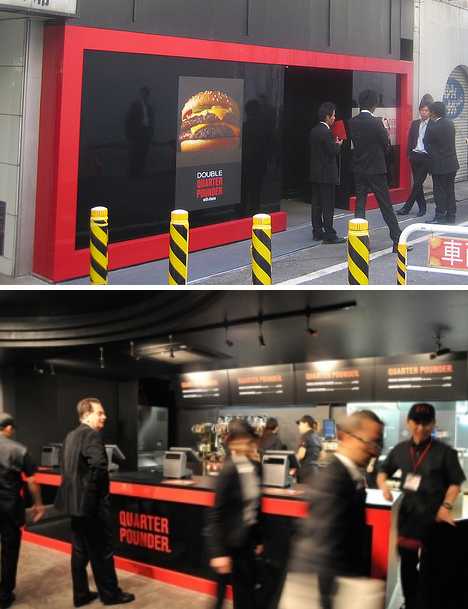 (images via: FuguTabetai.com and Girvin)

Quarter Pounder stores sought to exude a higher level of style and attract a more sophisticated clientele, and the stores’ “adult” decor and design illustrated McDonald’s efforts in those convergent directions. Both Tokyo locations of Quarter Pounder quickly sported block-long line-ups to get in… which would be impressive anywhere BUT Tokyo, where it’s standard practice.