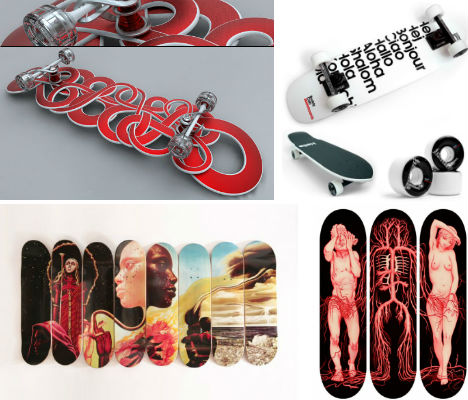 Can you bear to place the soles of your shoes upon artwork this beautiful? While almost all of these artistic skateboard designs were made to be functional, they’re also worthy of hanging in a gallery alongside fine art. This collection of 15 eye-catching skateboard designs includes collaborations with famous artists like Damien Hirst, graffiti-inspired designs, photo prints and typography. 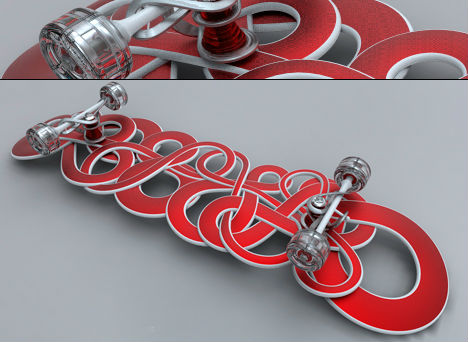 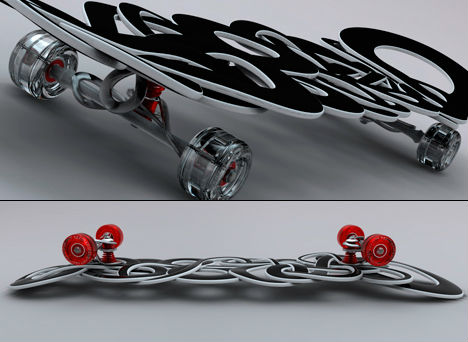 Designer Loren Kulesus created this graffiti-inspired art board, inspired by New York City ‘wild style’ graffiti. Creative as it is, it’s actually a functioning board. 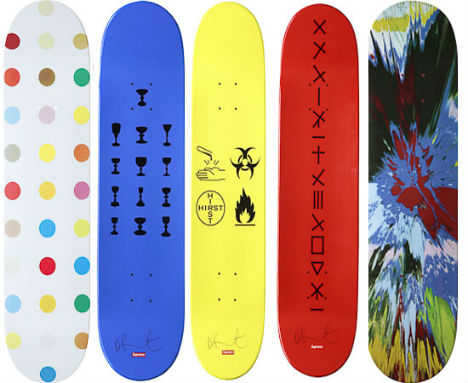 Artist Damien Hirst is known for some bizarre and highly unconventional installations, and for creating his own signature version of everyday objects. His work generally comes at a stratospheric price tag, earning him the title of the most expensive living artist (exhibit A: a $98 million diamond skull). Compared to his other works, these skateboards are a bargain at $1,945 for a signed, limited-edition version of $778 for unsigned. 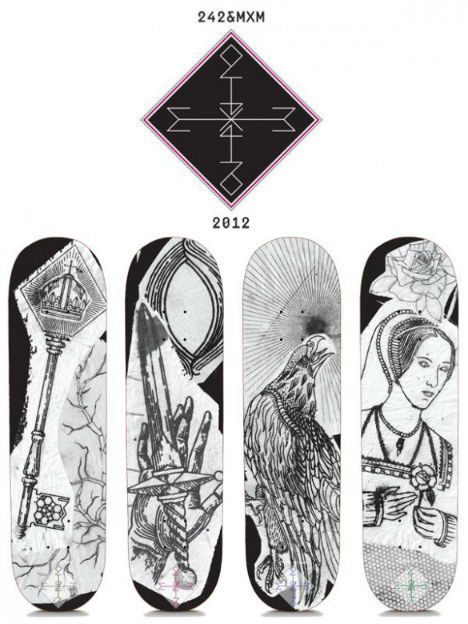 (image via: the breaks)

Maxime Buchi is founder and creative director of Sang Bleu Magazine, and works as an art director as well, but is best known under the moniker M-X-M for his geometric and often esoteric tattoo work. His signature style is translated to a collection of skateboard decks in a collaboration with 242. 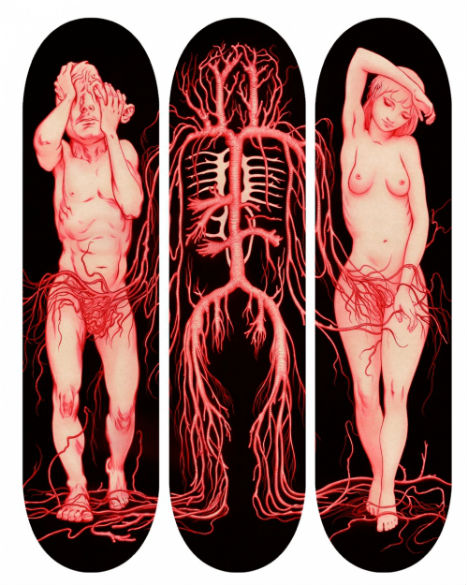 James Jean designed this trio of skateboard decks for the 15th anniversary of Giant Robot magazine. Says Jean, “Skating has always seemed to me a courageous activity, and what is courage but an absence of shame. Adam and Eve were expelled from Eden, pitiful in their nakedness, shameful in their new knowledge. However, the rise of science made man and nature transparent, naked again under a microscope and scalpel. We adorn ourselves with knowledge, hiding our private selves under a crimson web, until a bad fall shreds it to the bone.” 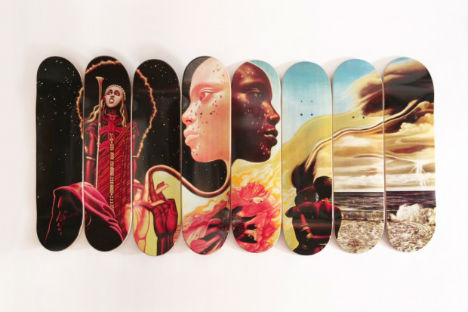 The classic ‘Bitches Brew’ painting by Mati Klarwein translates to a very modern medium with the help of the artist’s son Balthazar, a renowned skater. Together, the four skate decks depict the work, which was notably featured as the cover art of one of Miles Davis’ most iconic albums. 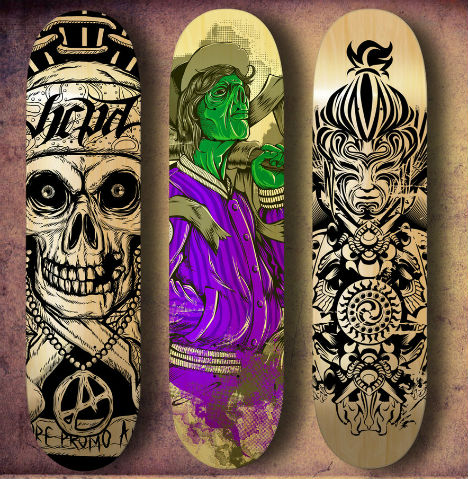 DeviantArt user ‘Chicken Child’ created this mock-up of a skateboard deck design purely as concept art, but there’s no doubt it would sell if it were real. 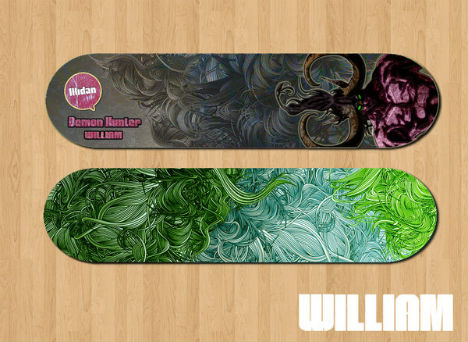 The ‘Demon Hunter’ board design by DeviantArt user Stephen Tian is all lush greens and blues on one side, and darkness on the other. 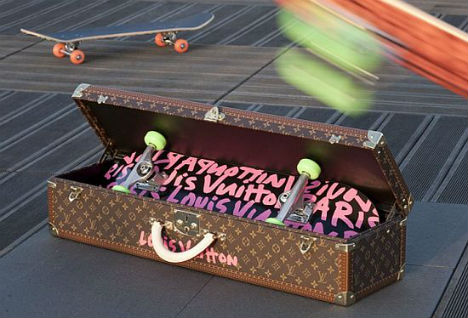 Two disparate worlds collide in this art board by Stephen Sprouse, which not only has ‘Louis Vuitton’ scrawled all over it in purple and pink graffiti-style lettering, but comes with its own Louis Vuitton hard case skateboard trunk. Just three of these were made available for $8,250 each. 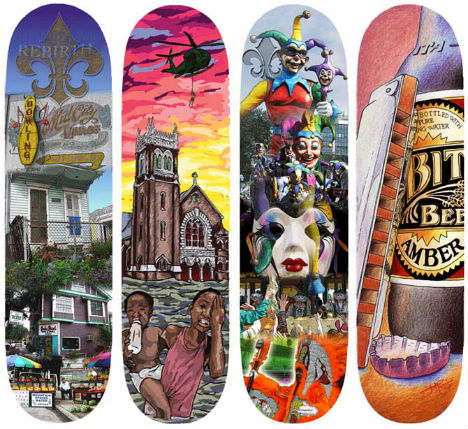 New Orleans artist Jeffrey St. Romain was driven from his home city by Hurricane Katrina, but ultimately returned, and pays tribute to it with his new company Structure NOLA. The new Orleans-inspired decks, which include scenes of the aftermath of the hurricane and of Mardi Gras, are meant for wall art rather than functional use. 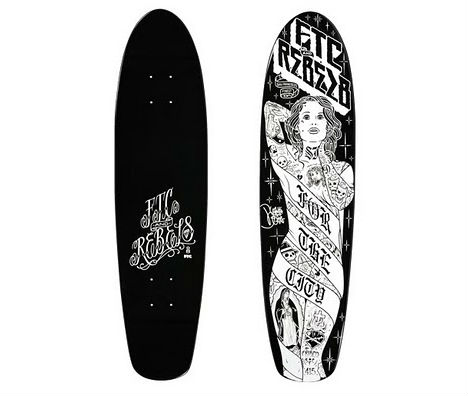 San Francisco’s iconic skate shop FTC teamed up with Mike Giant’s REBEL8 for this artistic deck, as part of the company’s 2010 Spring/Summer collection. 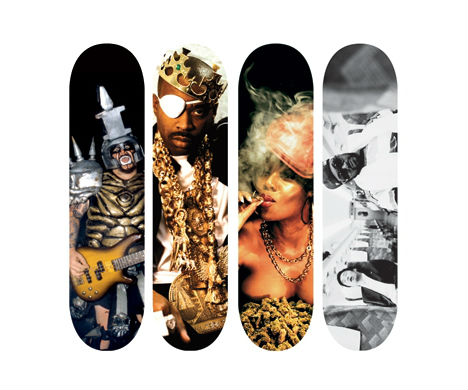 Hip hop photographer Craig Wetherby teamed up with Seattle-based Manik Skateboards for this collection of photo-print decks featuring some of Wetherby’s most popular imagery. 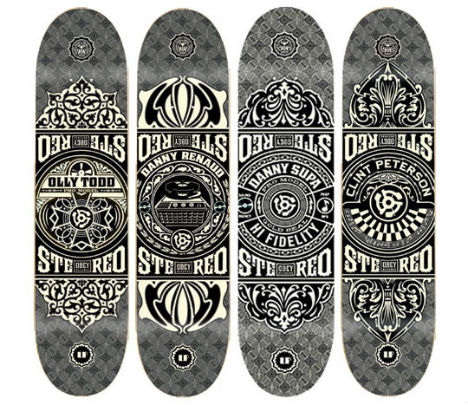 Artist Shepard Fairey collaborated with Obey and Stereo Skateboards on a series of four pro-decks in black and white. 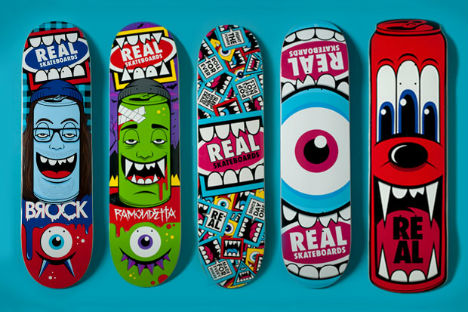 This colorful pop art series is the result of a Spring 2012 custom capsule collaboration between Atlanta’s Greg Mike and REAL Skateboards. 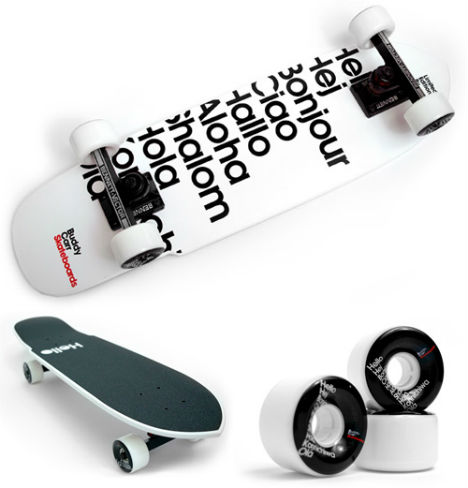