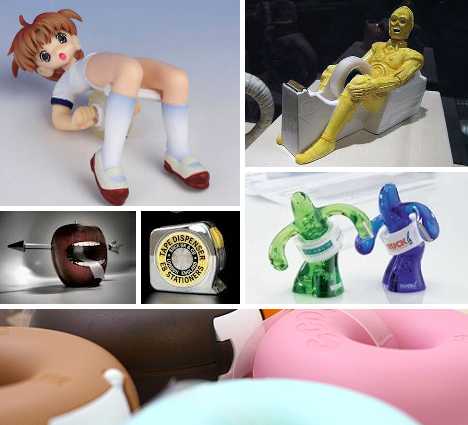 Roll tape! These 15 concept adhesive tape dispensers stick sometimes surprising form together with often (though not always) adequate function. Imbuing office supplies with personality can be a difficult proposition but on today’s fiercely competitive desktop it pays to be extra attractive. 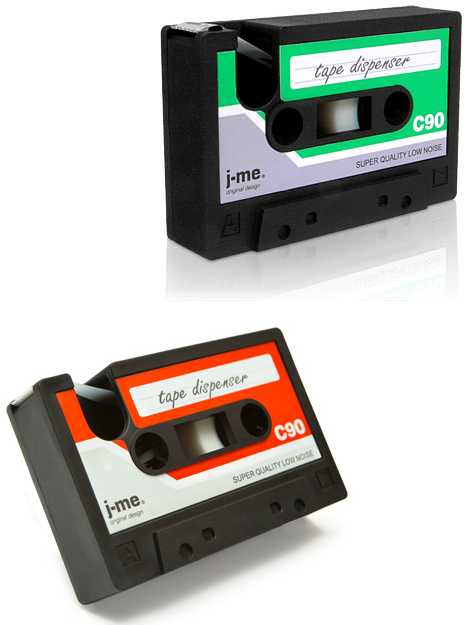 This is a tape dispenser disguised as a cassette tape, ingenious no? Of course, if you don’t remember cassette tapes you won’t find this item ingenious, ingenuous or interesting. At the very least it’s an excellent way of determining which of your office mates is lying about their age. 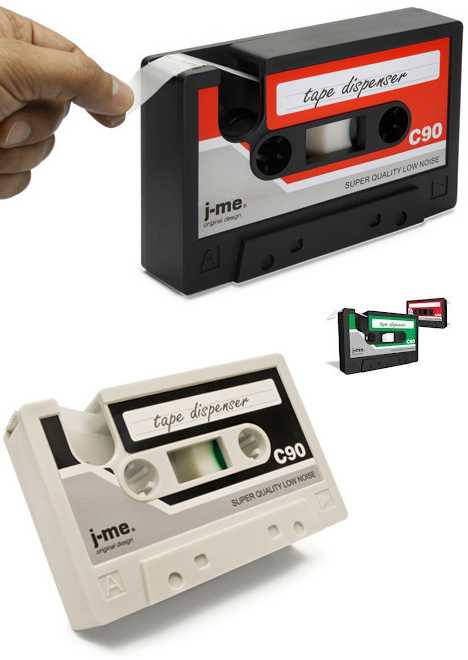 (images via: The Good Life, UberReview and J-ME Original Design)

The J-me Tape Dispenser is made from hard rubber and has a non-slip bottom because really, who wants their tape dispenser sliding around their desktop when all you want is a small snippet of tape. The case splits apart down its longitudinal axis so you can install a new roll of tape once the current one is exhausted. 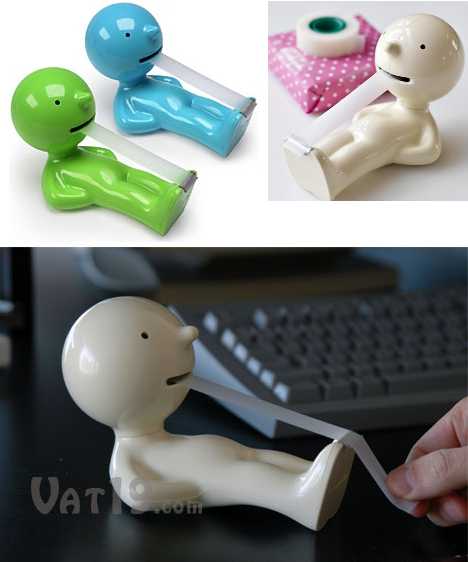 The Mr P Tape Dispenser is a bit of a stretch… at least, Mr P is. Indeed, from his hollow, tape-filled head to his serrated shoes, ol’ Mr P cuts quite a figure while he cuts your tape to exactly the right length. The 6.25” long dispenser in made from tough ABS plastic and is available in a number of colors including cream, pink, blue, black and green. 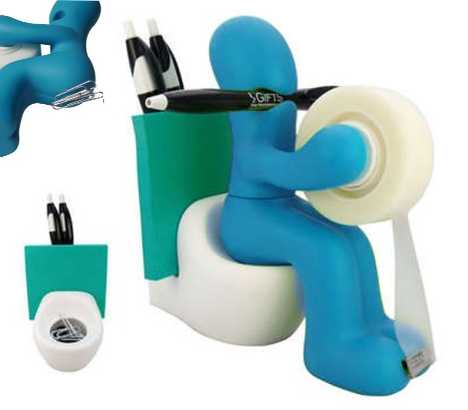 (images via: Love Because)

If you think Mr P’s too one-dimensional, go all out with the Butt Station Desk Accessory Holder! Not only does our anonymous blue (or green, or orange) dude hold your tape and slice it with his sharp shoes, he also stores your pens – one in his mouth and the rest in the “toilet tank” behind him. Speaking of behinds, the faux toilet bowl he’s sitting on stores staples and his magnetized butt will grab a few when you pick him up. 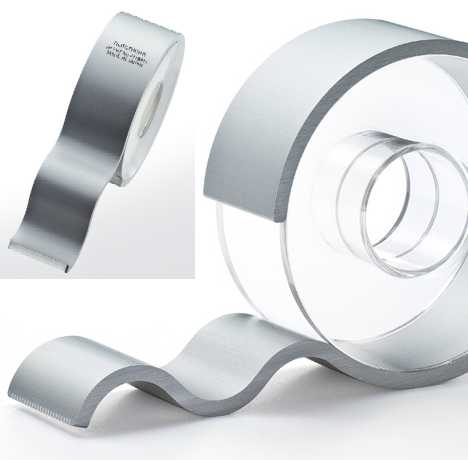 Getting back to pure design and capital C conceptualism, we have the Notchless Tape Dispenser by Kikuchi Yasukuni Architects Inc., so-called because it, er, has no notch. Some might say that the open, minimalist design does indeed have a notch: the serrated feature at the end of the aluminum body of the dispenser. Of course, those are the same people who insist on stating they see four lights when everyone knows there are… not four. 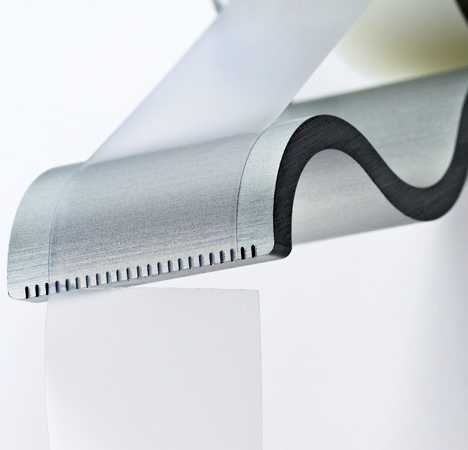 The Notchless Tape Dispenser displays a lean & hungry look that would add a dash of modernist chic to any upscale office layout. In fact, the only adornment visible is the name, origin info and Japanese patent number incised into the dispenser’s lower facing. Notchless or not, it’s got the Japanese Patent Office’s seal of approval. 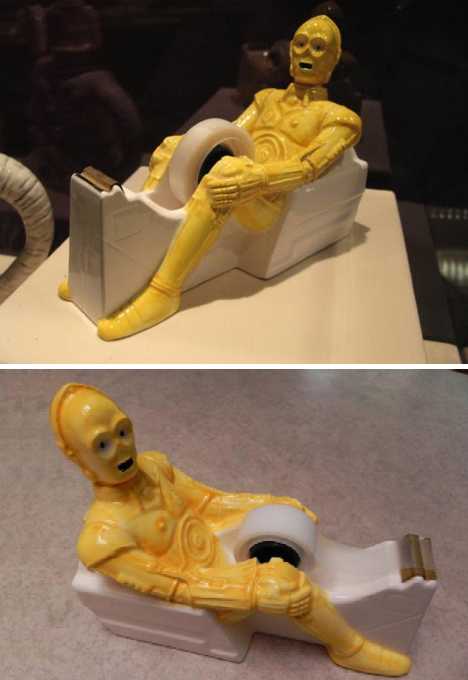 This C-3PO Tape Dispenser was described as a “vintage” item when it was advertised on eBay, which makes this writer feel positively prehistoric as the hideous thing dates from 1983. Made from porcelain by Sigma, the design can be considered unfortunate on a number of levels, not least its basic functionality. No sir, this is NOT the tape dispensing droid I’m looking for. 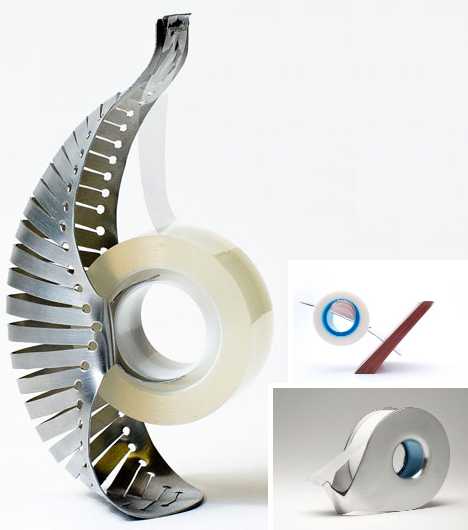 Where will you find future tape dispensers before their time? At design schools, naturally, and you can decide for yourself if the future is friendly or frightening by eyeballing the tape dispenser designs above. Clockwise from above left are concepts by Hunter Frerich, Jeffrey Grothe and Daniel Galan, sophomore students at Western ID whose idea of the future might be very, very different from yours or mine. 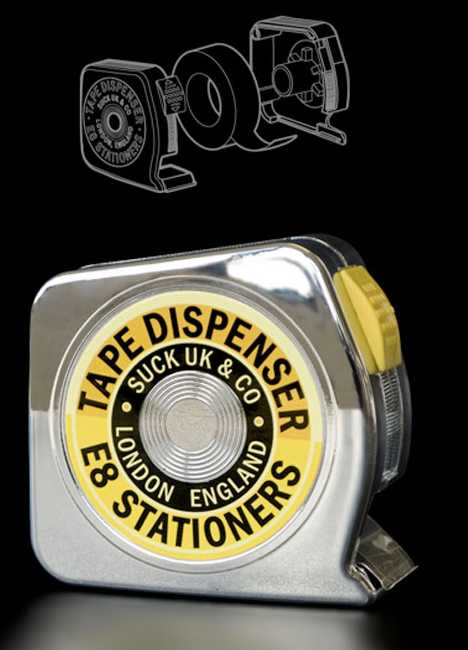 The stealthy Sticky Tape Dispenser from SUCK UK doesn’t suck at all but it most definitely IS stealthy. Its ABS plastic body appears to be polished chrome and inside you’ll find not a coiled metal measuring tape but a very different king of tape one should never use for measuring. It’s even got a belt clip for those who are in the habit of carrying around their tape measures hands-free. 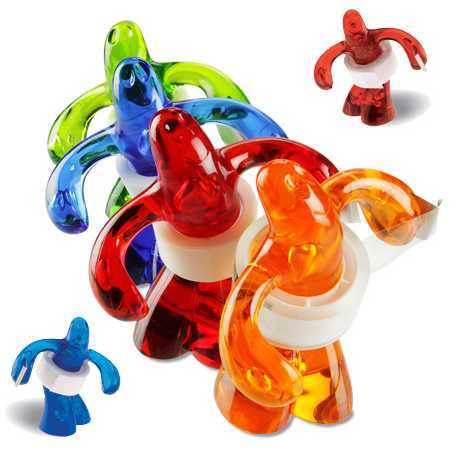 (images via: DesignQuest and 4imprint)

The Elvis Tape Dispenser from Koziol references The King in his early, hip-swiveling days as opposed to the later, fatter, sweatier Elvis. Instead of a guitar or a hula-hoop, your desktop rocker sports a roll of tape he slices neatly with the end of his arm. 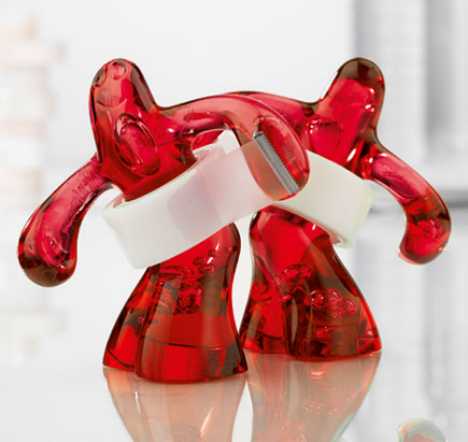 “Yes-sir-ee, uh, uh, I’m gonna stick like glue, because I’m stuck on you,” sez our tape dispenser from Tupelo – or at he would if he had a chip installed in his acrylic body. Work on that, Koziol. 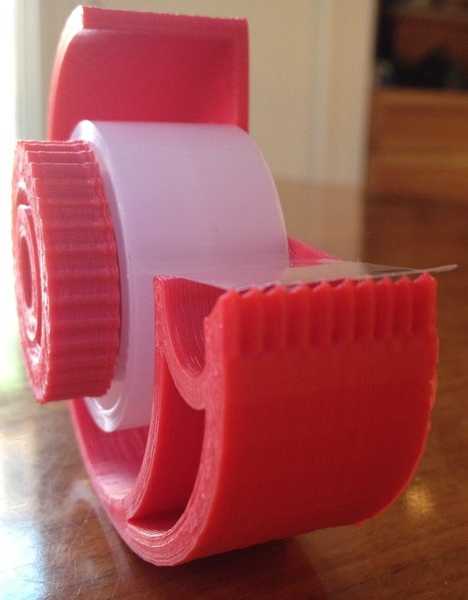 There’s not much one can say about the tape dispenser from JAG other than it’s big, it’s bulky, it’s a little rough around the edges and it looks like it’s made of hardened bubble gum. And I’m all right with that. 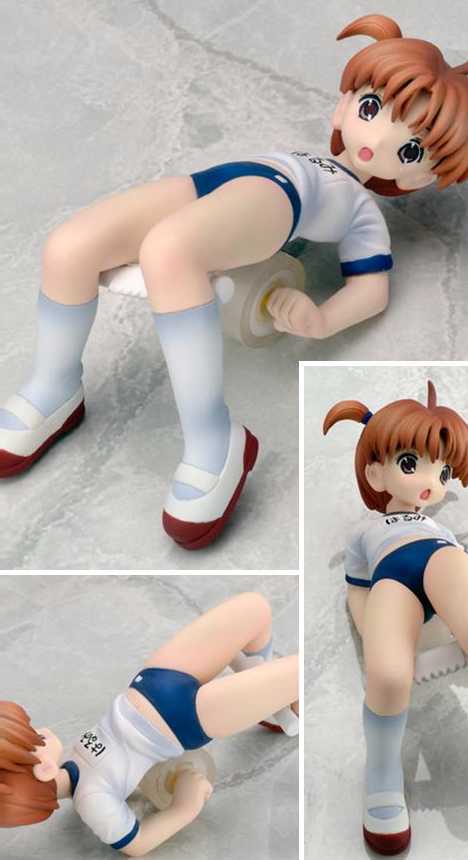 The Anime Tape Dispenser is one of a set of five different stationery items featuring Japanese schoolgirl figurines decked out in Phys Ed duds – better than tartan skirts, one supposes. The other figures pose with an eraser, ruler, pen holder and pencil sharpener, the latter two less suggestively than you might assume. The manufacturer’s website seems to be 404 but these figurines have achieved an afterlife of sorts, which says a lot about either their quality or that of their buyers. 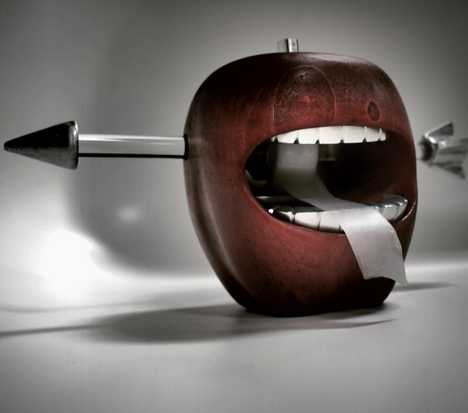 Boston-based Haiden Goggin thinks the Surrealist Tape Dispenser is just looking for a space on your desk, so consider yourself warned and start filling every inch of space before it arrives. Did the creative types at H-G model this disturbing concept after Steve Martin circa 1977? Can you say “Excuuuuuse me!!” with your mouth taped over? 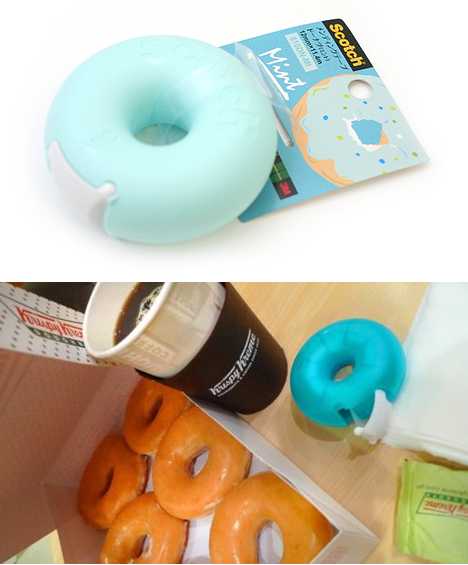 (images via: Zillamag and The Exterminator Syndicate)

Nothing goes better with work than Scotch and donuts, unless you’re, say, a brain surgeon in which case you might want to hold off until after the operation. These cute & kitschy tape dispensers come from 3M, the Post-It Note people, so you’re know they’re on the up & up. Or, maybe it’s the result of too much Scotch in the boardroom, you never know. 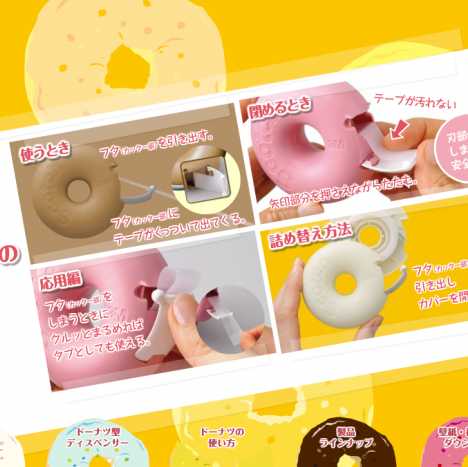 It should be said that these Scotch Donut Tape Dispensers come to us by way of 3M Japan, not the staid old fogies from the former Minnesota Mining and Manufacturing Company from Maplewood, Minnesota. 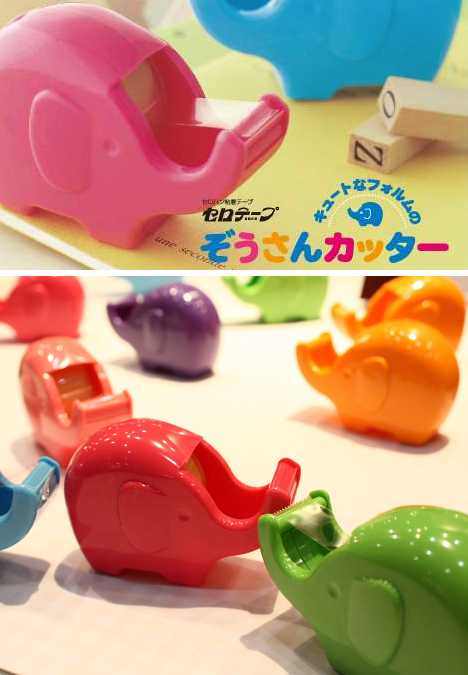 (images via: TrendHunter and Pink Tentacle)

Got junk in your trunk? Available in a range of rainbow colors, the Elephant-shaped Tape Dispenser from Japan’s Nichiban stomps all over the competition when it comes to being cute AND useful. The design is somewhat stylized and takes full advantage of the average elephant’s shape to adapt it to cutting tape. 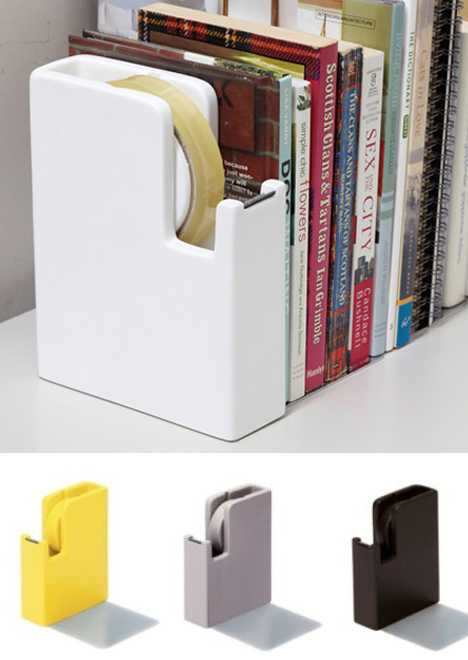 (images via: Caina and Hono/Rakuten)

Here’s the Bookend+ Tape Dispenser from Japan’s Ideaco, because if there’s anywhere you want a roll of sticky adhesive tape it’s next to those pricey college textbooks and favorite first editions. To be honest, though, squeezing extra usefulness out of something as one-dimensional as a bookend takes a lot of smarts… book smarts to be exact. 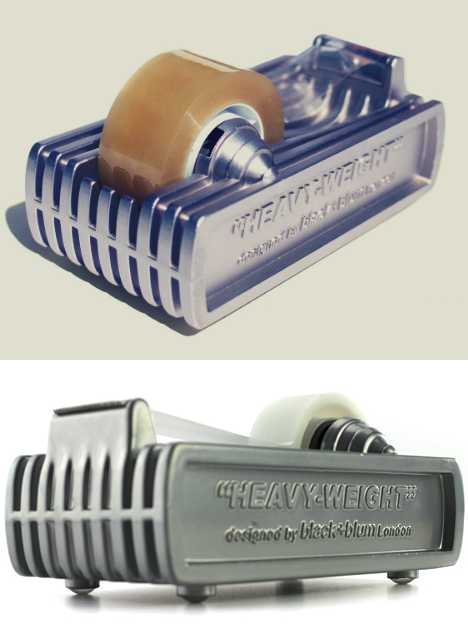 The Heavy-Weight Tape Dispenser from the UK’s Black + Blum looks like the business end of a 1954 De Soto sedan and appears to be about as massive – just wait ’til you drop it on your toe for the first time! 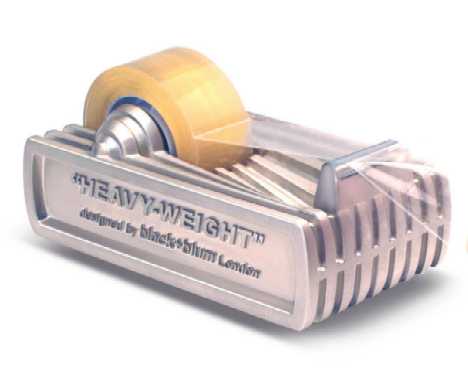 Considering a Heavy-Weight Tape Dispenser? Be careful what you wish for: you may end up having to purchase a heavy-weight desk to support it, and don’t even think of “sticking” the cost onto your office supplies budget. 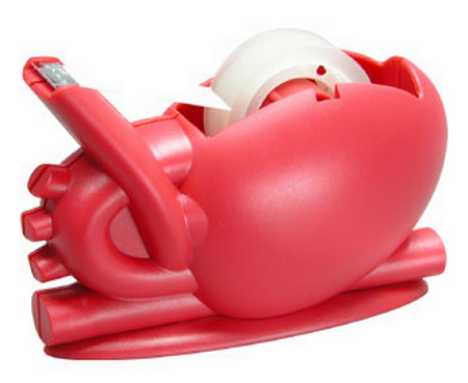 We hope you like this selection of concept designer tape dispensers enough to take them to heart, but if not there’s always the Heart Tape Dispenser above. Call it humor in a jugular vein… and be sure to install low-cholesterol tape to avoid sticky blockages!