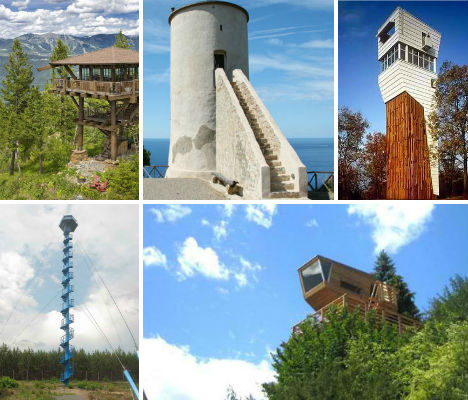 Look out! These 14 tall and narrow houses rise up above the landscape to enable incredible panoramic views of rustic nature preserves, lakes and city skylines. Some are converted from old fire towers, lookout towers (and even water towers) while others are just inspired by their shapes. These tower homes range from restored 15th century guard towers in Italy to blocky, modern concrete construction in Chile. 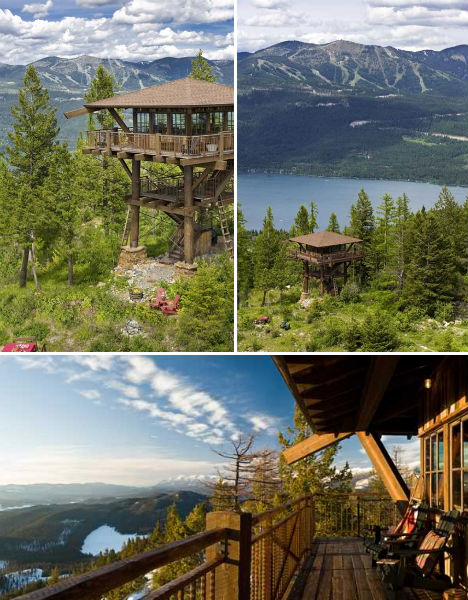 This incredible 35-foot-high, single-room wooden house on a mountaintop in western Montana takes its inspiration from fire towers, with rustic wood beam construction and unbelievable views. The 30-inch Douglas Fir timbers are reinforced with steel brackets and X-cross beams to withstand strong winds, and the wood was stained gray to help it blend into the landscape. Mike Koness, owner of building company Centennial Timber Frames, says “It turned out to be a pretty sweet little fort.” 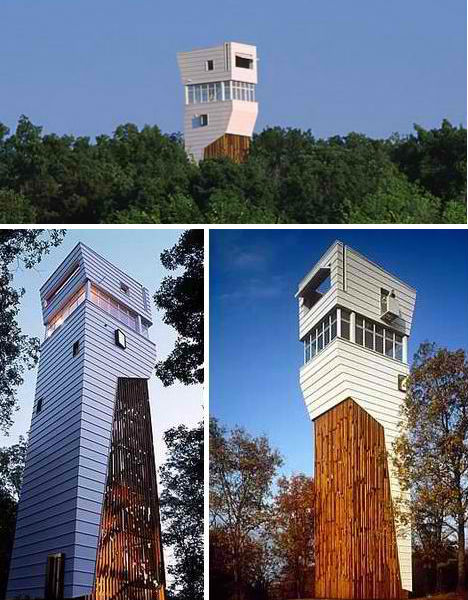 Poking up above the tree canopy, this modern tower home doesn’t exactly try to blend in – it’s a striking statement with a 360-degree view and a rooftop deck that’s open to the sky. Architect Marlon Blackwell screened off the 50-foot-long staircase that leads up to the living and working space above so that it gets sunlight and air. 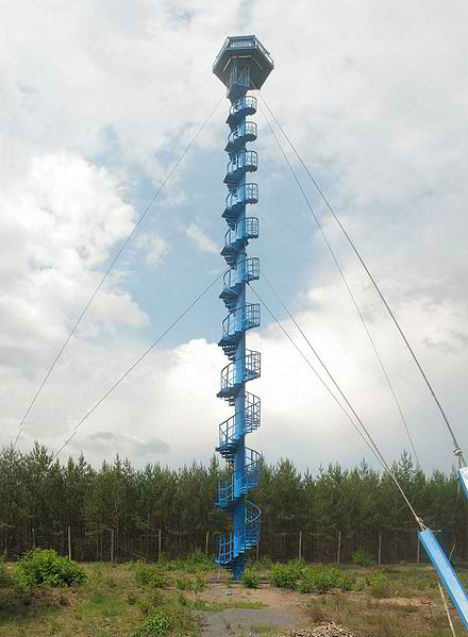 Very little information is available, but this spiraling blue fire tower in Poland is purported to be a home. That would be one very long walk to a very small living space, especially when it’s raining, but the views are probably worth it. 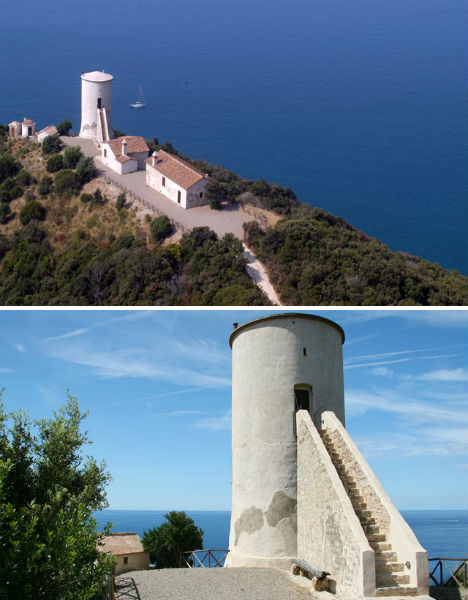 (images via: invitation to tuscany)

Once a lookout tower for soldiers patrolling the shore for pirates, this stunning 15th century structure is now a spacious vacation rental. Located in Grosseto, overlooking the Tyrrhenian Sea, the complex once consisted of barracks, an oven house, a chapel, a well and a sentry box and was reachable only by mule. Now, it’s filled with multiple bedrooms and a living/dining room with high-beamed ceilings. The well was even converted into a Jacuzzi. 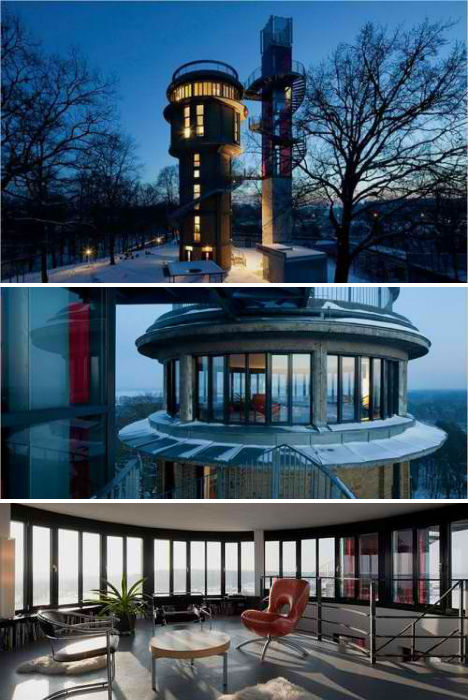 A pair of British designers turned a disused, 68-foot-tall industrial water tower in East Germany into a stunning residence. The design takes advantage of the adjacent nature reserve with 360-degree windows in what was once the tank. 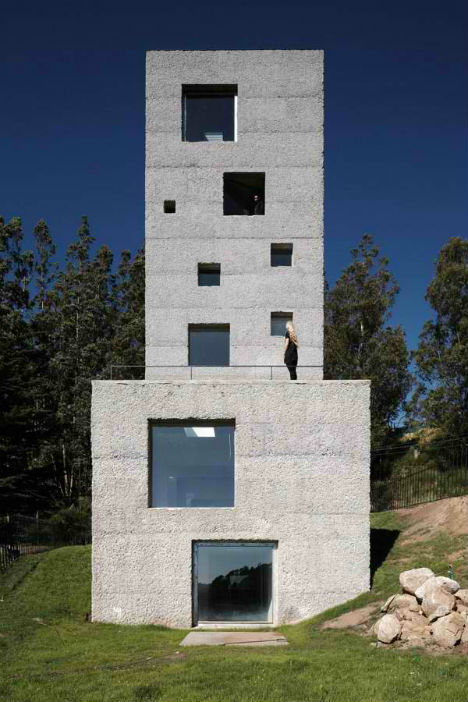 This is probably unlike any lookout tower you’ve ever seen, but its narrow, vertical shape still calls traditional towers to mind. Architects Maurizio Pezo and Sofia von Elrichshausen gave the Cien House in Concepcion, Chile a podium base topped with a tower structure that allows the inhabitants to view the city skyline. 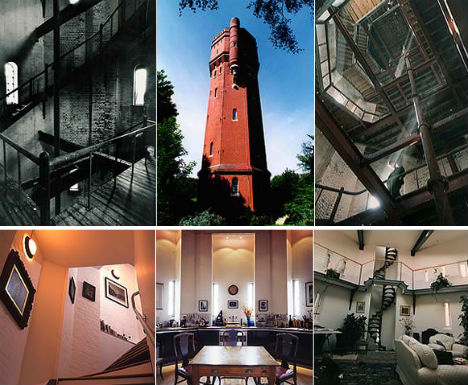 A red brick 1898 water tower that was built to supply water to surrounding houses in Munstead, England is now a six-level home. Architect Elspeth Beard purchased the empty, disused tower in 1989 and converted it to include a living room, kitchen and dining room and bedroom. The transformation of this 130-foot structure gave the interior a new use while preserving the historic exterior. 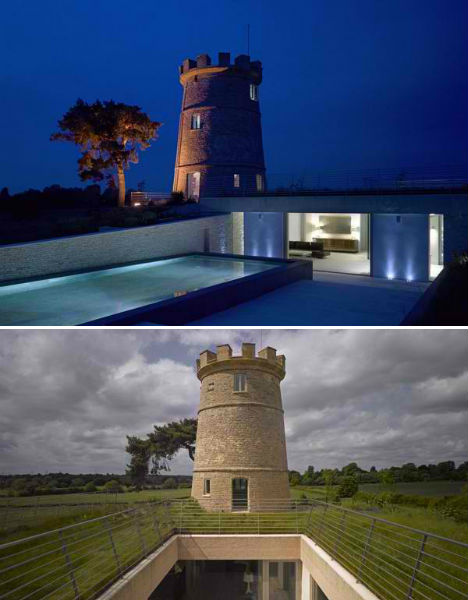 Decades of neglect, not to mention a fire, nearly reduced this beautiful tower in Gloucester, England to a pile of rubble. Architects De Matos Ryan not only preserved the tower, which is a listed history site, but built an underground addition that expands the living space in a seamless blend of traditional and modern styles. From above, the tower looks as it always has, but hidden just over the hill is a reflecting pool and sunken courtyard leading into the home. 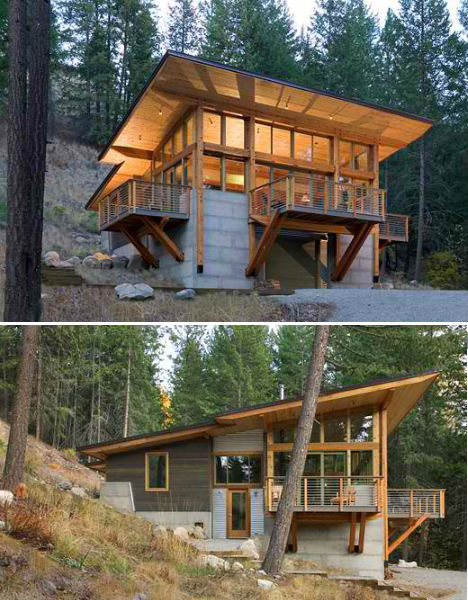 It may not be elevated like most other tower-inspired houses, but the Wintergreen Cabin by Balance Associates, located in the Methow Valley of Washington State, was a look that clearly takes after the types of lookout towers that are often present in preserves and other wild areas. 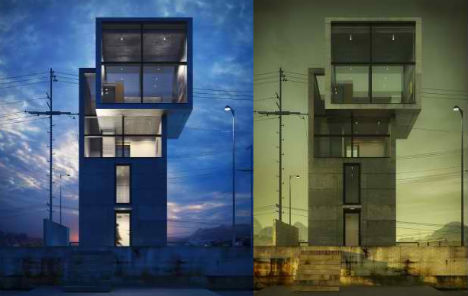 Perhaps Tadao Ando’s iconic 4×4 house in Kobe City, Japan, wasn’t directly inspired by lookout towers – but it might as well have been. Functionally, this concrete home designed to pack a lot of living space onto a tiny footprint offers the same advantages, with huge glass windows that look out onto the streets. 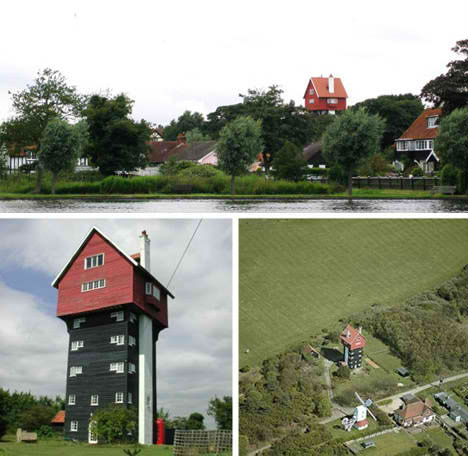 This water tower wasn’t converted to look like a house after the fact – it was built that way from the beginning, in a bid to be a little more visually interesting for its rural neighbors. But then its usefulness as an actual water tower declined, and it became a house after all. 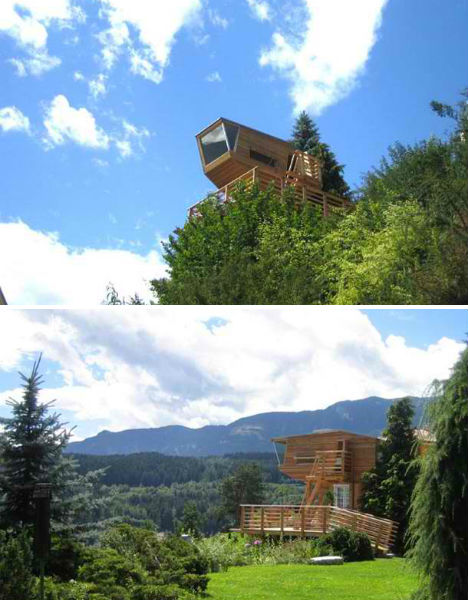 Known for its spectacular modern tree houses, Baumraum created this free-standing wooden home inspired by lookout towers. The house, which enjoys views of Lake Millstat in Seeboden, Austria, was built on stilts and includes a solid glass wall as well as two terraces. 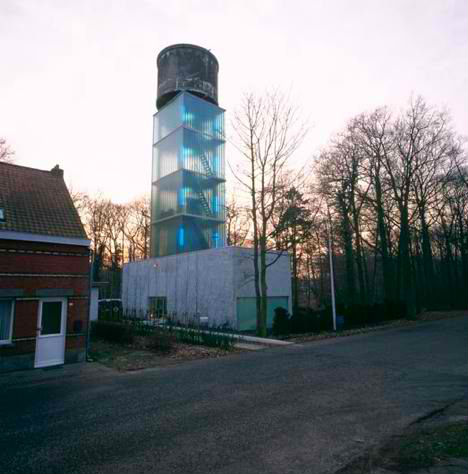 Architect Jo Crepain explains this conversion: “For a long time the owner was in love with an old water tower and the little park around it, outside of Antwerp. Although it was by no means possible to live in the old tower, since it was just a skeleton, with a huge barrel on top, he started dreaming of building it into a house. And six years later, together with his architect, he made a dream come through.” 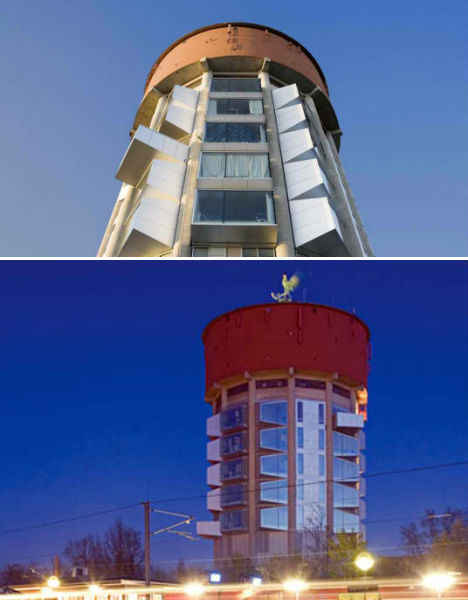 An ugly old water tower in Jaegersberg, Denmark got a new life as student housing after a renovation by Dorte Mandrup Arkitekter ApS. The firm won a competition to transform the old structure, extending the space with geometric protrusions that push out from the main column of the tower.