Sleepwalkers like camping too, and now they can stay warm while they wander! These 12 wearable sleeping bags combine the best features of traditional sleeping bags and insulated hiking clothes, saving space in one’s backpack while offering the opportunity of an instant exit should other insulated forest denizens get too close for comfort. 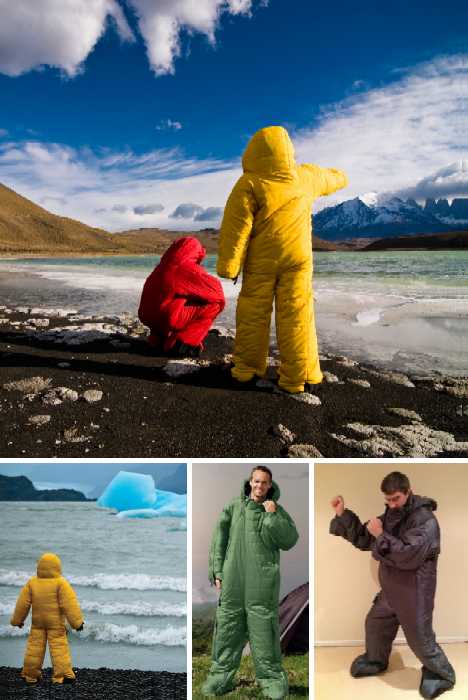 If you’re feeling chilly in Chile, then get a Selk’Bag! The brainchild of Chilean graphic designer Rodrigo Alonso Schramm in cooperation with Lippi Outdoor of Santiago, Chile, the Selk’bag Sleepwear System made its U.S.debut in August of 2008. Selk’bag, which has expanded its line to children’s styles and sizes, has set the bar for wearable sleeping bags in just a few short years. 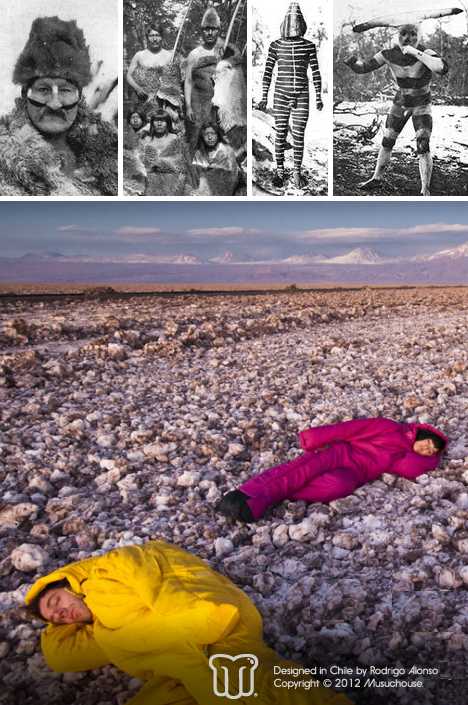 The concept’s odd name is derived from the Selk’nam, indigenous nomads native to Tierra del Fuego in southernmost South America whose last full-blooded member died in 1974. The Selk’nam were famed for their adaptation to the region’s oft-frigid environment. With Selk’Bag, Schramm sought to pay homage to this lost society while highlighting the unique properties of the company’s sleepwear designs. 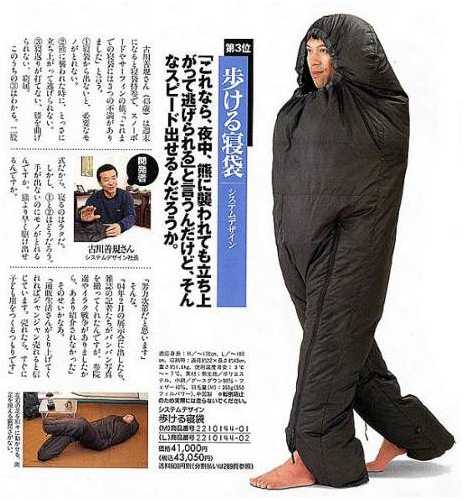 The Walkable Sleeping Bag System Design, or “Arukeru Nebukero” in Japanese, costs the equivalent of $400 bucks and has been much-parodied as the Japanese Snuggie. The inventor, 43-year-old Zenki Furukawa, got the idea for the odd armless design while lying awake wondering “If I get attacked by bears during the night, can I stand up and run away?” A more pertinent question might be, are the the bears merely hungry or are they conducting their own version of Frisky Friday? 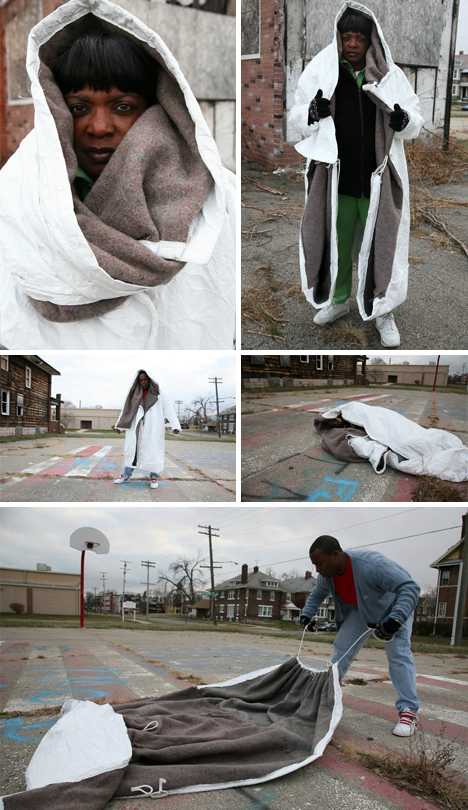 Poor Jacobim Mugatu… first he doesn’t get credit for inventing the Piano Key Necktie, then a host of designers flatter him by imitating his innovative Derelicte campaign. So it goes with the Elements Survival Coat. “The coat, designed to keep the wind out and the heat in, could allow homeless people to stay warm, but also preserve their dignity.” Michigan-based product design student Veronika Scott fashioned the multipurpose coat from Tyvec lined with a synthetic+wool blend at a materials cost of under ten dollars per coat. 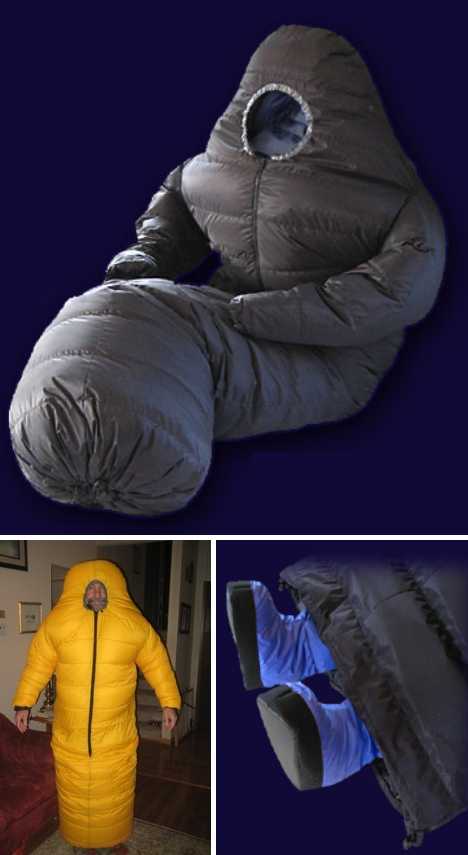 Looking somewhat like a soft deep-sea diving bell, the Raku sleeping bag from Nanutak Gear LLC features invertible sleeves and a zippered footbox that can be removed when sleeping time turns to walking time. The Raku looks plenty warm as-is in its 20 degree F state, but is also offered 0 and -30 degree F versions should your planned winter solstice slumber party becomes an impromptu reenactment of Scott & Amundsen’s race to the South Pole. 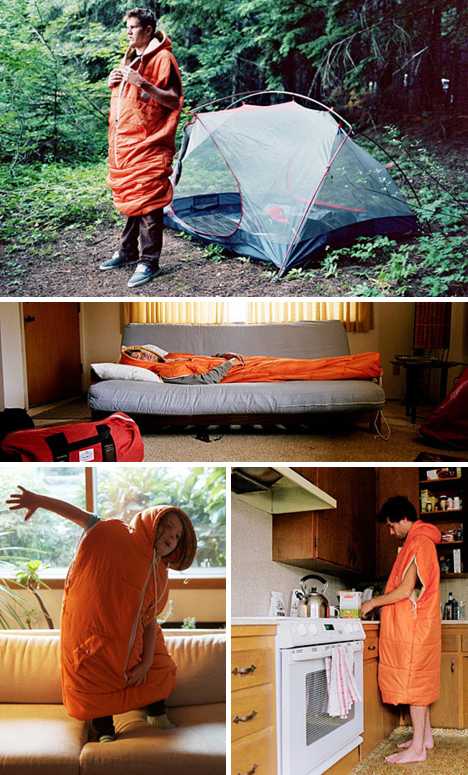 Lighter, looser and more practical for domestic slumber or sloth-wear, the Poler Napsack is sort of a wintertime Snuggie you can wear to Wal-Mart in a pinch… assuming you don’t already wear your Snuggie outdoors. 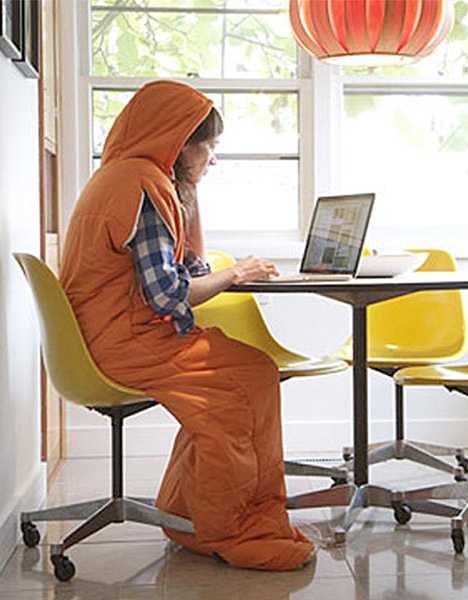 The Napsack was designed with modern lifestyles in mind. It has a chest pocket sized to fit a smartphone or MP3 player, then adds a hidden pass-through hole to route headphones or earbuds. These things won’t make you look any more businesslike but when you wear a Napsack, business isn’t on your mind to begin with. 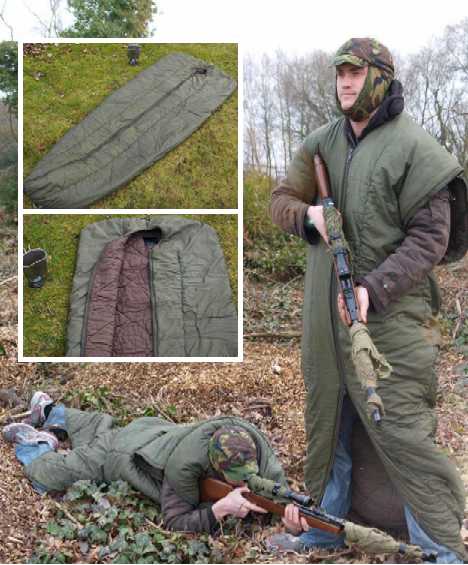 Fu-Kit stands for Forces Uniform and Kit, and as might be expected they make a mean walkable, wearable sleeping bag. Designed for soldiers and the requirements of the battlefield, these combo cold-weather wraps and sleeping bags allow wearers to whip out their AK47 in a flash, even when the temperature’s 47 below. 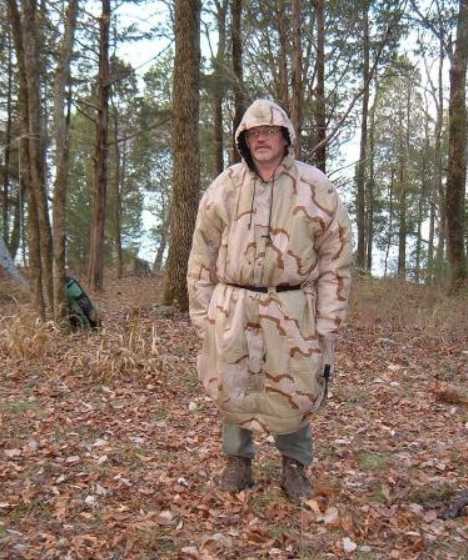 Ah, the great outdoors, where the deer and the antelope play! What could be better than snoozing or sauntering among the wild things with your cool camo camp bag? Well, depending on the season (summer, winter or hunting) one might prefer to remain a tad more visible if you know what I mean, and I think you do. 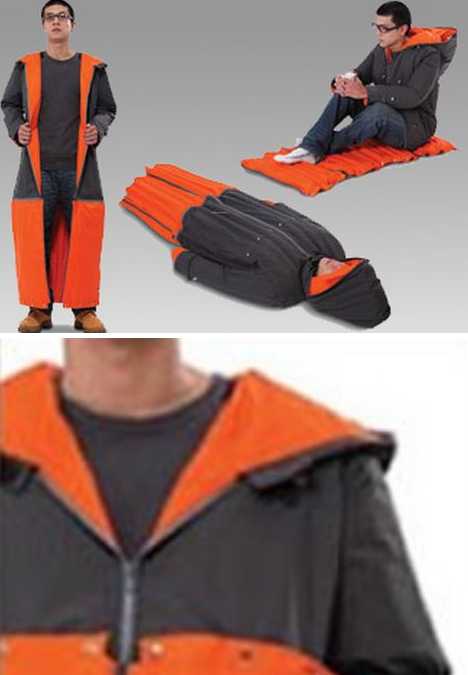 (images via: LikeCool and Campist)

Lin Tsui-Wei designed this Inflatable Sleeping Coat to be lightweight and multifunctional: the lower “pants” can be detached to form a thin but welcome mattress. More of a windbreaker than a classic cool-weather coat, the Lin’s Red Dot Award winning design actually looks stylish and when the day’s done, simply inflate the waterproof fabric to provide cushioning and insulation. 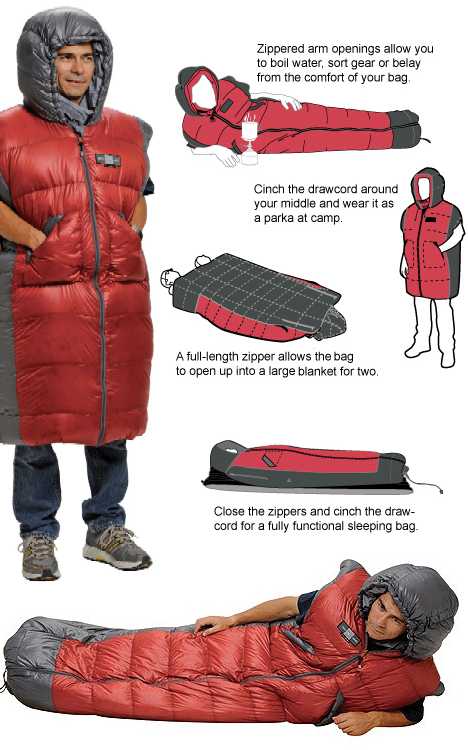 (images via: Summit Hut and MoonTrail)

OK, so EXPED’s DreamWalker 650 wearable 750-fill down sleeping bag makes you look sorta geeky and the Star Wars-ish name doesn’t help matters much but odds are you won’t be wearing one until you’re miles from the nearest town, city or Empire outpost. The practical design features a drawcord opening at the feet to facilitate bipedal mobility and zippered arm holes when you need to lend a hand. 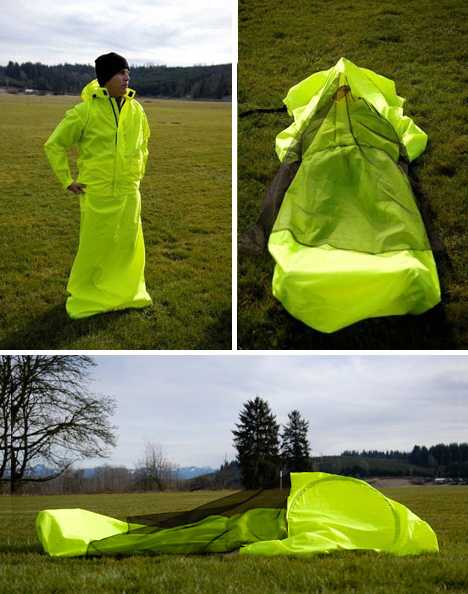 (images via: Otakku and Gear Junkie) 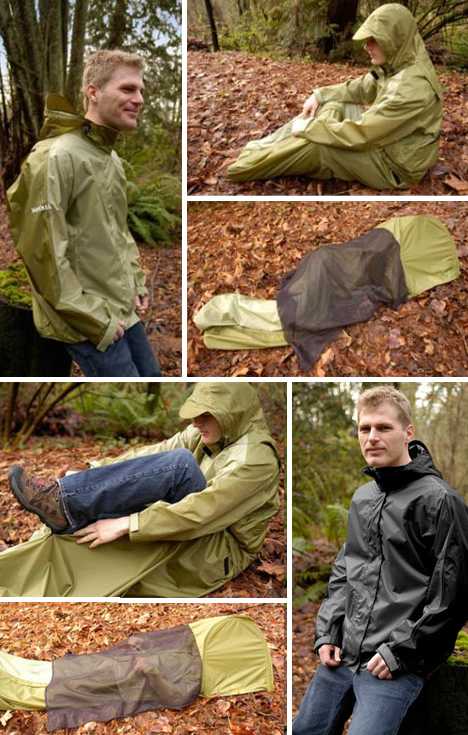 (images via: Hope For Zombies and Gear Junkie)

The $250 (approximately) JakPak’s been around for awhile and has garnered favorable reviews but its makers aren’t resting on their laurels. The most recent update to the lightweight (well under 5 pounds) design provides a more athletic fit while adding pit zips and a a no-see-um bug net. I guess a no-see-um bear net would be too much to ask for. 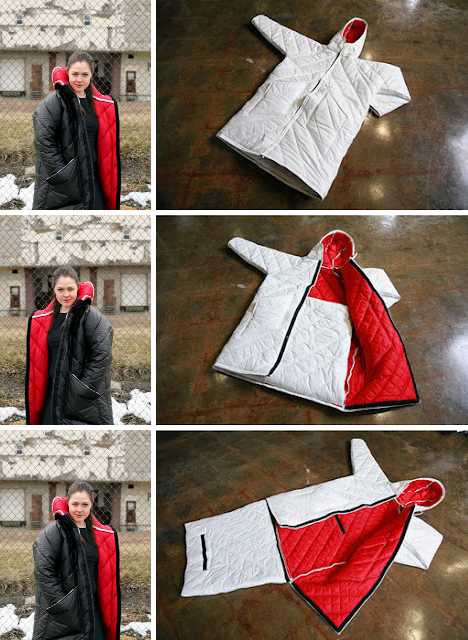 (images via: The Empowerment Plan)

The nice (and creative) folks at The Empowerment Plant have announced an improved, better-looking version of The Elements Coat that comes in black or white with a red lining. Called simply The MPWR Coat, the versatile garment was built to stand the coldest Detroit winter and offer comfort to that city’s down-on-their-luck street people. One of the recipients, a man who goes by the name of T-Bone, said that he “had never before been that warm.” Imagine what The MPWR Coat can do for you. 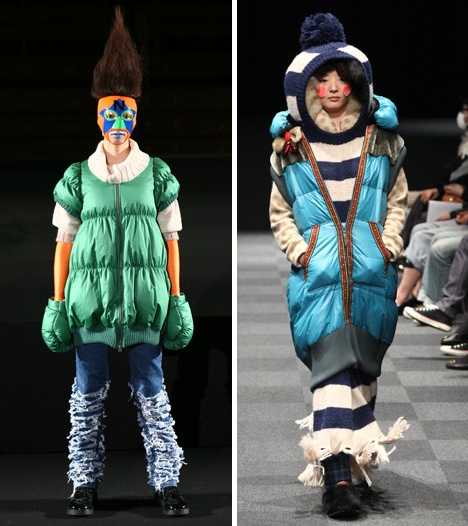 (images via: The Daily Truffle)

Those of you tut-tutting and dismissing wearable sleeping bags as a novelty at best, utilitarian clothing at its worst, might want to take note: the world’s fashion designers are onto it and that means sooner or later they’ll be on you! Check out the designs above from Japan Fashion Week designers Né-net and Mercibeaucoup… guess it’s true what they say: ya snooze, ya lose!