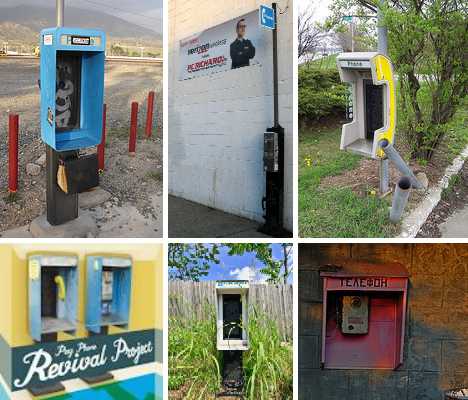 Payphones appear to be following the Pony Express down the well-worn path of obsolete technologies and their ubiquitous appearance in urban landscapes rings hollow in the face of today’s cell phone society. Rusting in place for at least a little while longer, the abused carcasses of abandoned payphones echo with lost conversations from a very different time. 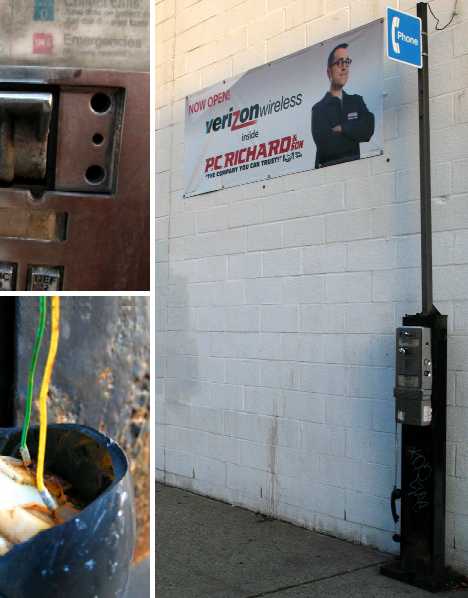 When you name your company UnderDog Communications, you probably have a good idea of the odds stacked against you. When your business is payphones, you’re probably certain of it. Even so, the Verizon Wireless ad slapped up just above this ungracefully decomposing payphone seems like a slap in the face to someone already down on their luck. Sorry decrepit payphone, not even Underdog can save you now. 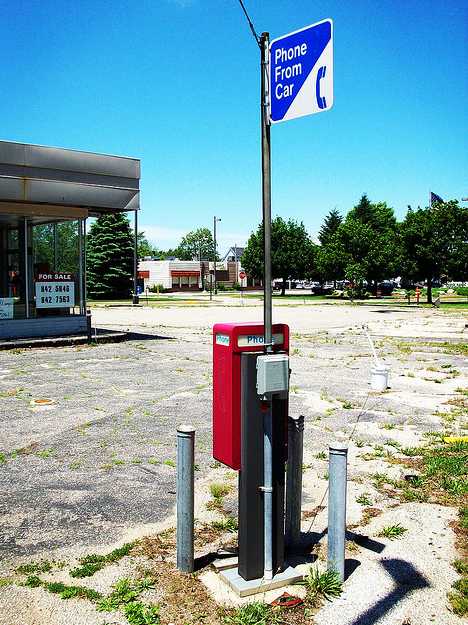 Give ’em credit, payphone operators didn’t go down without a fight. Take this “Phone From Car” payphone from Grand Haven, Michigan, situated in a… parking lot, of course. Perhaps inspired by the proliferation of drive-thru fast-food outlets, the concept was doomed by inclement weather and the host tenant packing it in. No cars, no calls, no service. 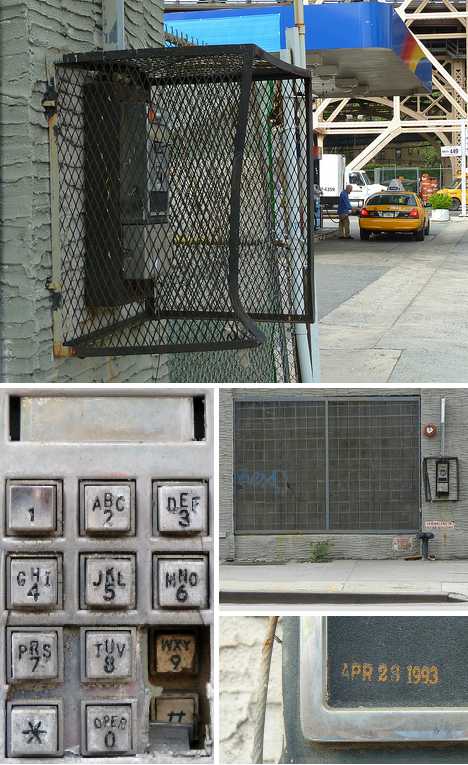 Hang around on 21st Street in Long Island City, New York long enough and you’ll look a little rough around the edges too. Still, this beleaguered beauty is more than showing its age – that’s a rough 19 if there ever was. 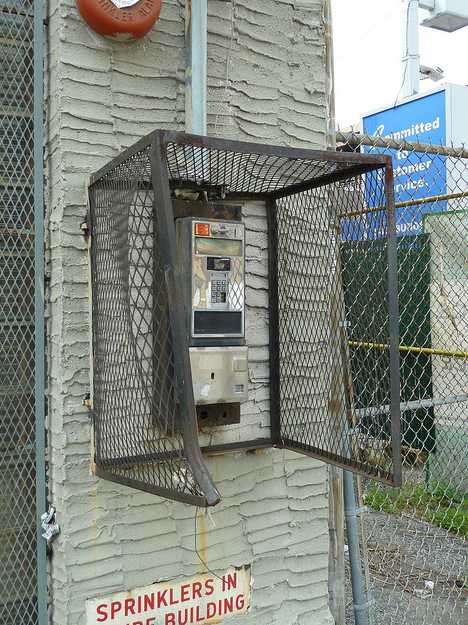 Caging this payphone in steel mesh didn’t keep the animals out and it couldn’t have been much a noise shield with the Ed Koch Queensboro Bridge just a stone’s throw away. Surely its only a matter of time before scrap metal scavengers abscond with the flimsy shield – not that we’re suggesting any such thing. 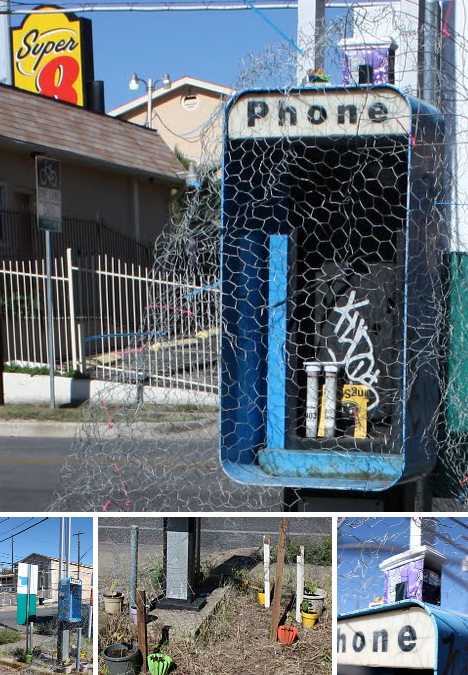 A payphone revival? In my city? It’s more likely than you think, especially if you’re city is Austin, Texas. The Pay Phone Revival Project focuses on six abandoned payphone booths on the east side of Austin. Artists were asked to re-purpose, re-imagine and re-work the decaying payphones and their associated infrastructure in a creative manner. Lindsay Palmer‘s concept involved building a chicken-wire bean teepee around the phone as a method of “envision(ing) a world in which we as humans have had to return to an agrarian society, and must do so amongst the ruins of our current world.” Gotta nice ring to it, hmm?

San Jose Can You See? 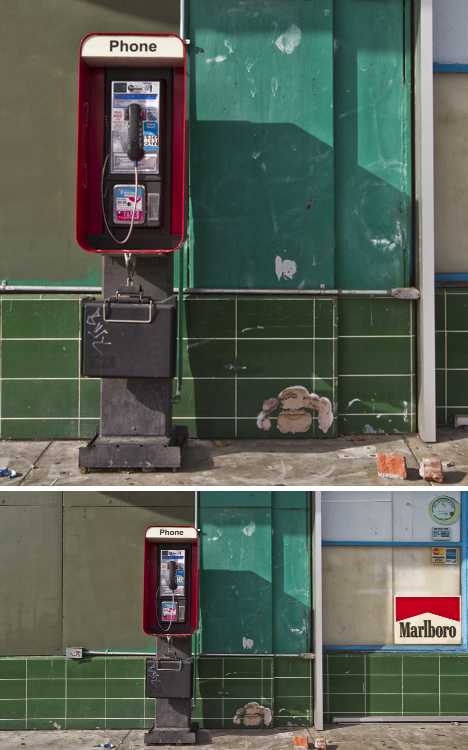 A relatively newly abandoned payphone outside a recently abandoned supermarket in San Jose, California, hasn’t suffered much from the vagaries of vagrants, vandals and vermin but it’s clear time is not on its side. The image itself presents a studied contrast in colors and tones, imbuing the composition as a whole with life though the scene itself is anything but lively. 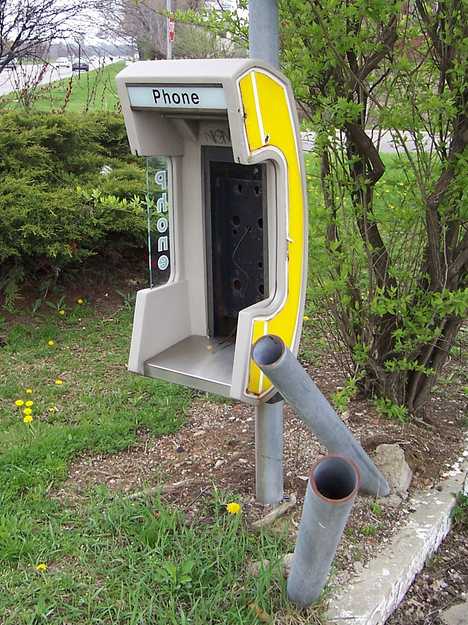 (image via: The Upstairs Room)

Gutted of its payphone and its purpose, a pleasant yellow payphone enclosure commiserates with the dandelions outside a closed gas station in Columbus, Ohio. The jaunty designer enclosure echoes the innocence of the Sixties and smiling round Happy Face buttons, dating it firmly in the realm of nostalgia. Reality roughly intrudes on the scene as rusting metal improvised bollards have bent but not broken their vow to protect this forgotten communications outpost. 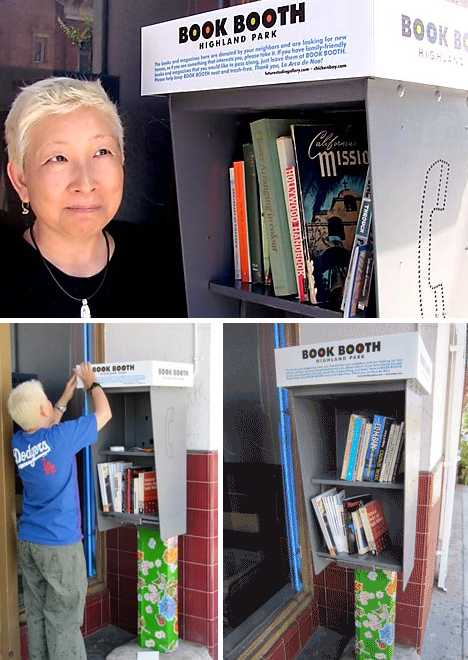 Highland Park is said to be an L.A. neighborhood beloved by hipsters so when Highland Park resident and artist Amy Inouye of Future Studio Design set out to revitalize an abandoned payphone, she looked back past the telephone itself. Book Booth, located at the Figueroa entrance to La Arca de Noe restaurant (5570 N. Figueroa), has been re-stocked several times. Got extra books? Get your smug on and bring ’em to the Book Booth, you can probably pick up a case of PBR on the way back. 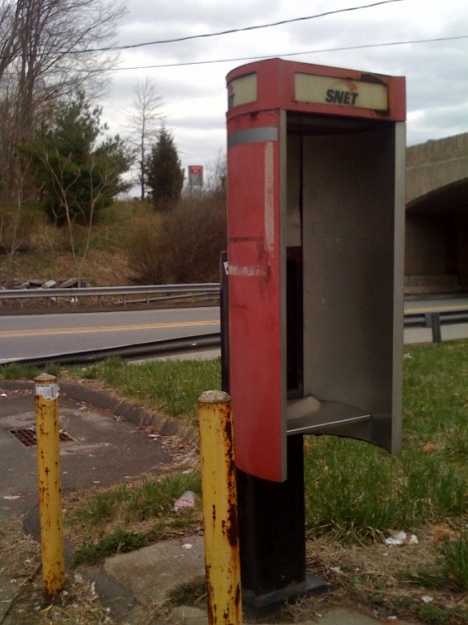 Remember SNET? Southern New England Telephone dated back to 1878 and issued the world’s first telephone book. The company was bought by SBC Communications (“new” AT&T) in 1998 and was folded into their Ameritech brand in 2006. None of this matters to the lonely, de-phoned payphone booth slowly succumbing to rust in Westport, Connecticut. The scene looks so depressing and miserable even graffiti artists avoid it like the plague. 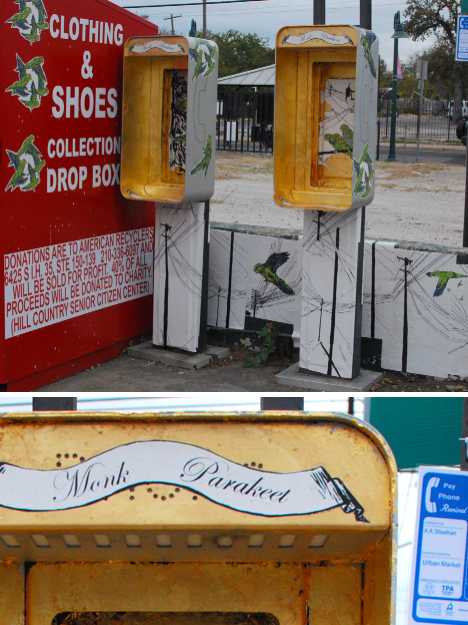 Austin’s Payphone Revival Project strikes again! If you’ve ever been at or around the Urban Market at 1905 E 12th Street, then you’ve likely experienced the sight & sound of urban-adapted but non-native Monk Parakeets. Artist K.A. Sheehan sought to invoke “nature’s ongoing adaption to an increasingly man-made and mediated landscape” by beautifying a pair of abandoned payphones with wheat paste, screen printing and gold leaf with a Monk Parakeet theme.

Praise the Lord & Pass Me a Quarter 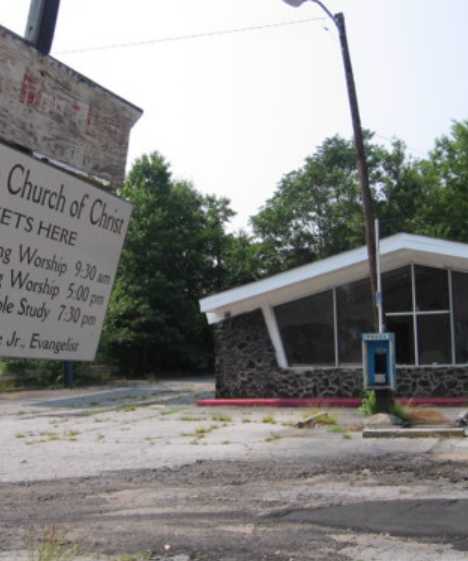 (image via: The Post-Pessimist Association)

The vaguely disturbing image above depicts the abandoned Midtown Church of Christ (Charles Spence Jr., Evangelist) in Atlanta, Georgia. The stylish (for 1963) structure seems to anchor a surrealistic world of leaning power poles and swaying signs as mutant green vegetation grabs an uncontested foothold on the parking lot. As for the curious placement of the payphone right in front of the building’s front doors, well, it poses questions we’re reluctant to even consider answering… and that goes double for the phone itself.