The Golden Age of Payphones 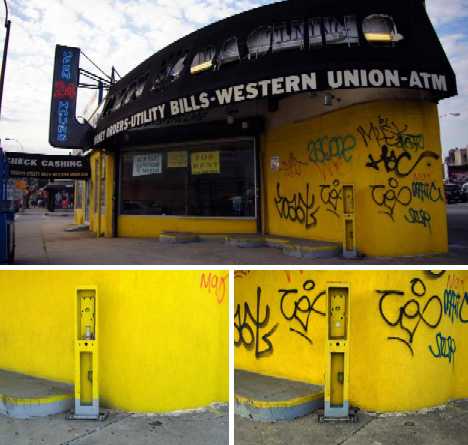 (images via: The Payphone Project)

Only a shell is left of this former payphone on Northern Boulevard in (presumably) Queens, New York. So inconsequential were the remains, the crew who painted the wall of a former check cashing business bright yellow simply sprayed over the remains, much like a highway line-painting crew over-spraying flattened roadkill. 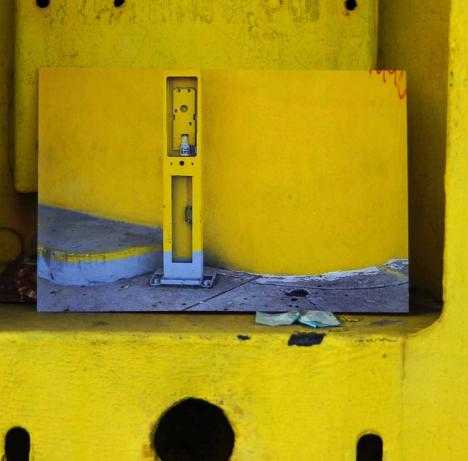 (image via: The Payphone Project)

The artist who captured the above images chronicled the progression of graffiti at the site but also left a calling card of his own: a photo of the payphone shell, as it appeared in 2008 on his first visit, propped up inside the booth. Who found the photo, and what were their thoughts upon finding it? If only there was some way for the person to call us from that location… oh, wait. 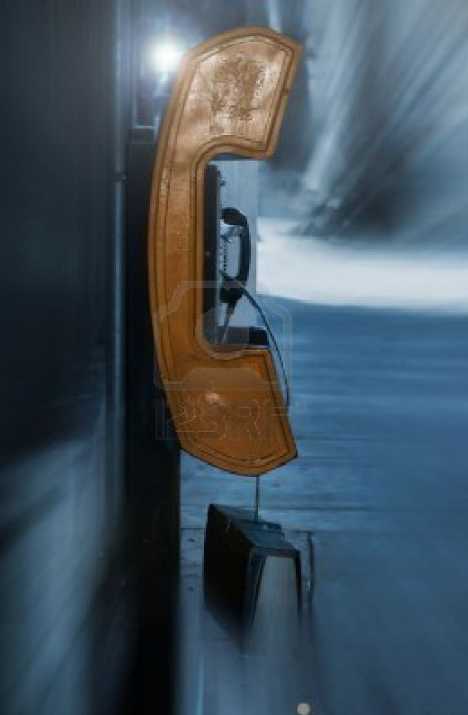 Is this the Madonna of payphones, sans the cheesiness and sleaziness of the Material Girl? Appearing as the only area of peace and warmth in the midst of the cold, card grayness of the fast-moving inner city, the rust-infected stylized payphone enclosure seems to be sheltering a thin, vulnerable infant of its species, still attached via its umbilical cord. 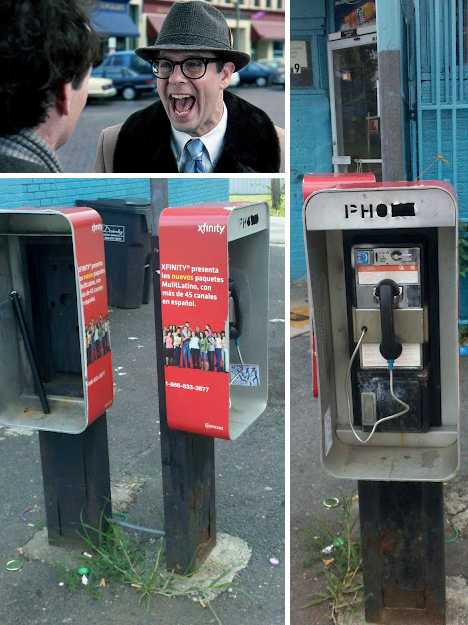 Hartford, Connecticut may be an insurance town but not even Ned “Bing” Ryerson could insure against the city’s slow, seemingly irreversible slide into urban decay. We’re not sure if Hartford’s payphones rang with a “Bing” but the pair above will ring no more, at least. Forget calling out on the one existing phone as it’s been gagged with a slab of steel – harsh. As for its long-lost twin, one suspects it was removed with a pair of… (puts on shades) “Needlenose” pliers! 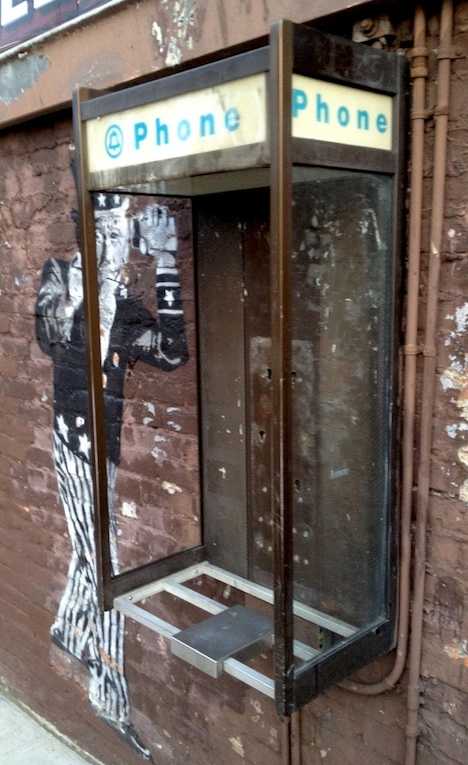 Is this a visual commentary on the decline of the American Empire? The gritty city image above comes to us care of Ruth E Hendricks Photography. Chocolate brown walls, a gray-scale monotone Uncle Sam graphic straight outta the Roaring Twenties and the busted payphone’s white & blue call sign that may or may not be on combine to create a surprisingly tasteful tableau. 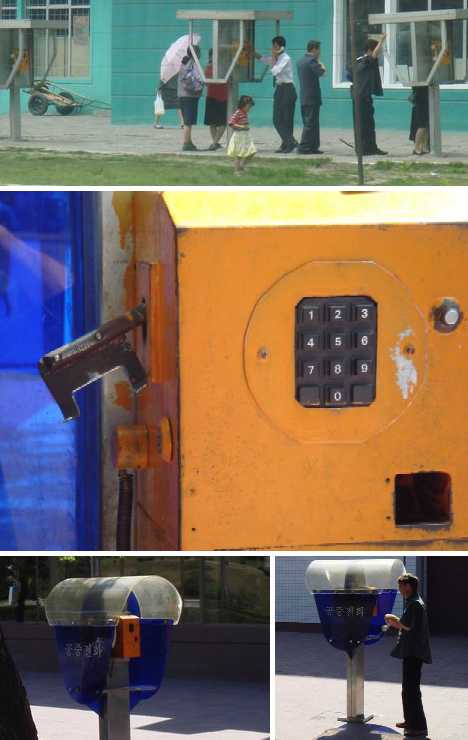 (images via: The Payphone Project)

Yes, there really are payphones in North Korea though they seem about as rudimentary as it gets – and we’re not just talking about the paint job. It looks like these Pyongyang payphones haven’t been upgraded for a LONG time and note the complete lack or vandalism, discarded trash and graffiti… not even a carved “Hawkeye Was Here”. 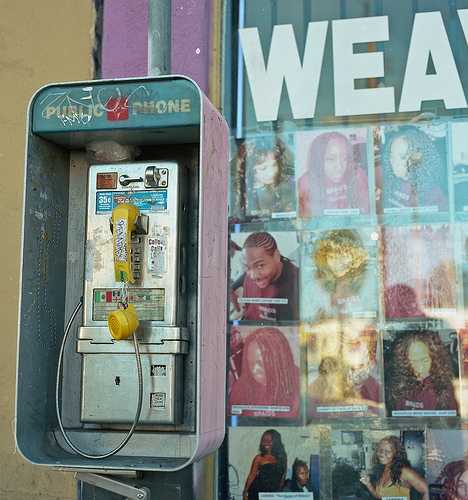 The brutal dichotomy of a friendly yellow phone receiver viciously snapped in two and the smiling photos plastered on the wall encapsulate the shifting passions of the urban milieu in microcosm. How old is this payphone? Inner city sociologists might roughly date it by the amount of graffiti on and around the phone, other more practical types can investigate when payphones charged 35 cents for a call.

The Belle of Sacramento

Photographer Kalyn Ruijters captured this lonely telecom outpost standing in the sun at 4411 Stockton Blvd. in Sacramento, California. It’s one of nearly a dozen abandoned (or close to it) payphones dotting the cityscape’s more blighted areas and artistically framed in the Sacramento Press photo essay “Payphones – A Thing of the Past …Almost”. 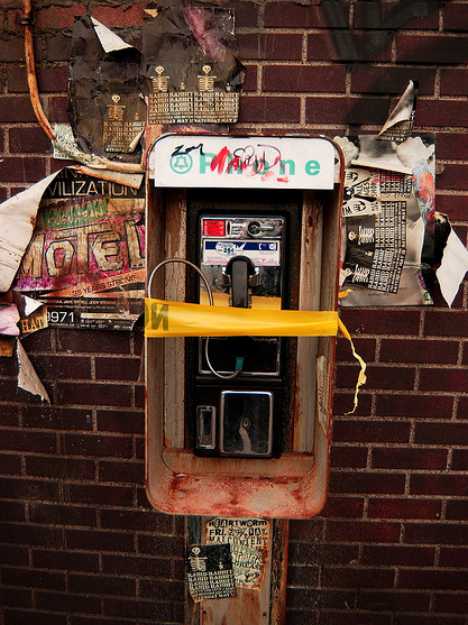 So much for Canadians’ reputation for being respectful and polite – in person maybe, but not over the phone! This very much used and even more abused payphone isn’t just out of commission, it’s a danger to the public according to the police caution tape wrapped around it.

Seemingly disowned by its original installer and left to the cruel buffeting of winter blizzards, this solitary holdout of 20th century telecom technology in Paducah, Kentucky is remarkably unmolested by vandalism or graffiti tags. Is the payphone really as abandoned as its photographer seems to think? Give respect where it’s earned: through it all, the phone receiver still rests snugly upon its cradle. 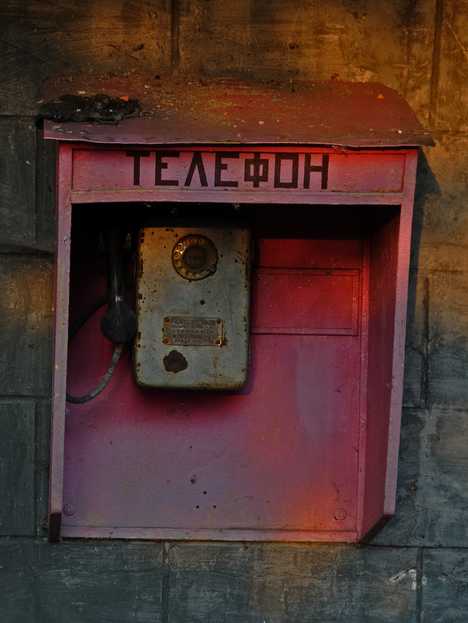 In post-Soviet Russia, phone pay YOU! Well, probably not so save your kopeks, comrade. By the way, the red phone is for loading and unloading only so Putin down the receiver and move along. This decrepit and decomposing relic of the Evil Empire slowly gathers rust at an abandoned camp in Debal’tsevo, Donetsk Oblast, Ukraine. Exactly what KIND of camp, the photographer won’t (or can’t) say.