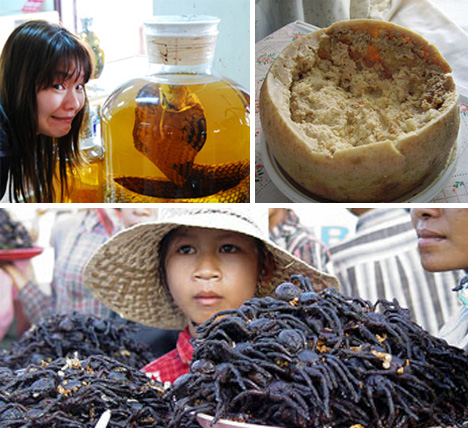 For some people, sushi is one of the wildest things they’ve eaten. By international standards, that is pure child’s play. Most countries have their own quirky delicacies and by American standards, they can appear ghoulish. 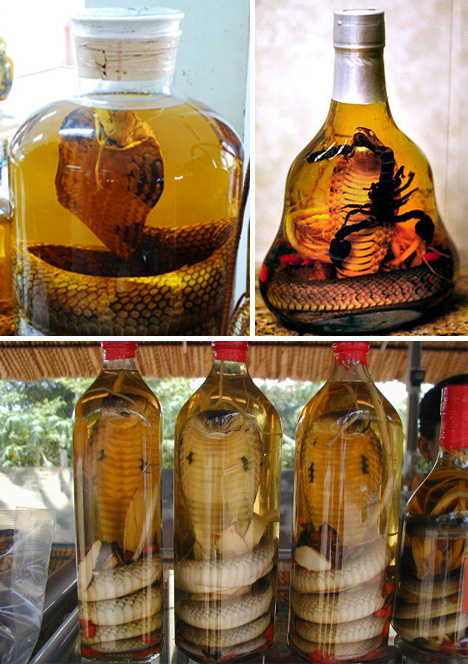 In Vietnam, snakes are thought to have great medicinal qualities, so they created a beverage that is somewhat of a cure all, called snake wine. In snake wine, an entire venomous snake is placed in a bottle that is filled with liquor. It is steeped long enough that the ethanol breaks down the venom and it is safe to drink. 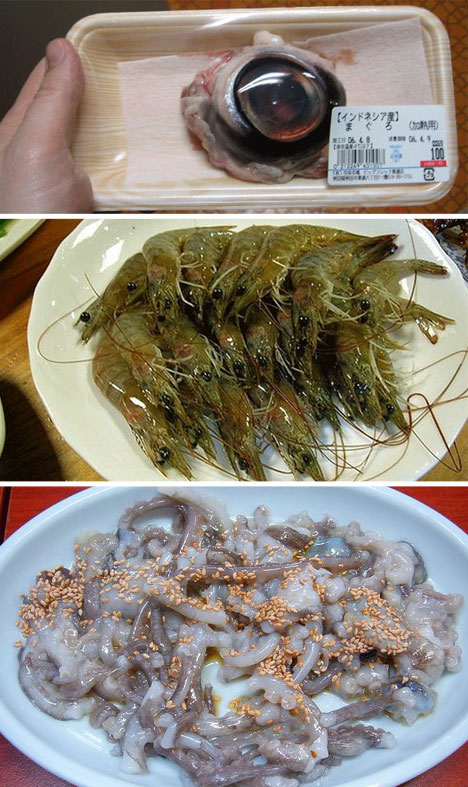 Tuna is a very popular fish, but most American consumers remove one part of it before consumption… the eyes. The eyes are quite popular in Japan, and are sold individually. The shrimp pictured above have not been cooked. They’re placed in a liquor that stuns them long enough for them to be consumed alive. Sannakj is a very popular eastern dish. The chef chops up a live octopus so the tentacles are still moving while they’re on your plate. 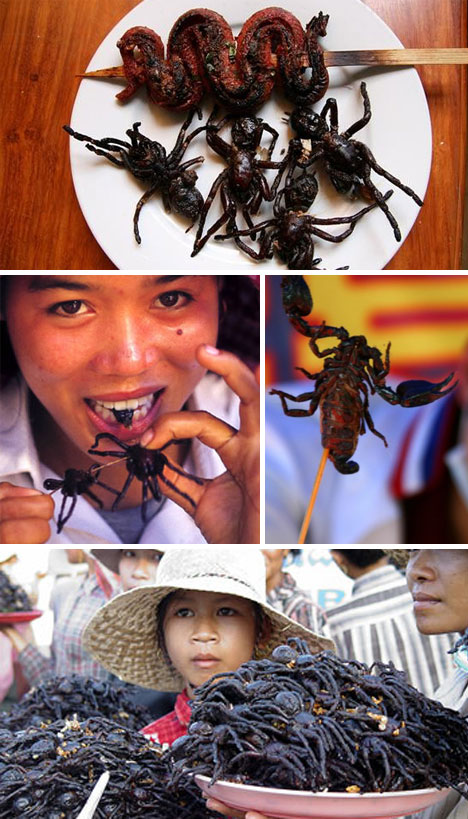 Insects and reptiles are an excellent source of protein and in most countries, eating them does not carry the stigma it does in the West. A delicately prepared snake kabob is pictured with a spider side. Scorpion on a stick is a great treat for the road, and in Cambodia, fried tarantulas are incredibly popular. 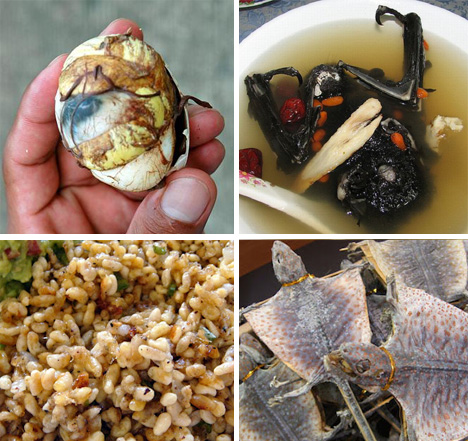 In the West, people only eat unfertilized eggs. In other countries, it’s quite the opposite; fertilized eggs are broiled and prized as a yummy snack called Balut. Bat soup is remarkably common internationally, and lizards are used to flavor soup. At least there’s some nice risotto pictured above, right? Wrong. Those are actually giant ant larvae and the dish is known as Escamoles. 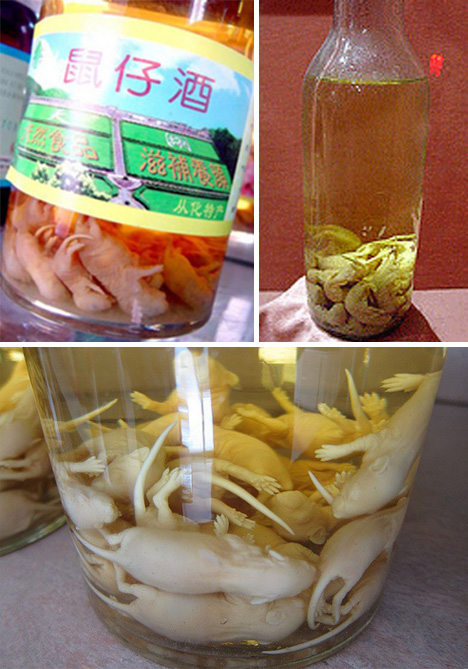 Baby mice wine is said to have restorative properties. Residents of the Far East will drown newborn mice in the wine and then drink it when they need a boost. 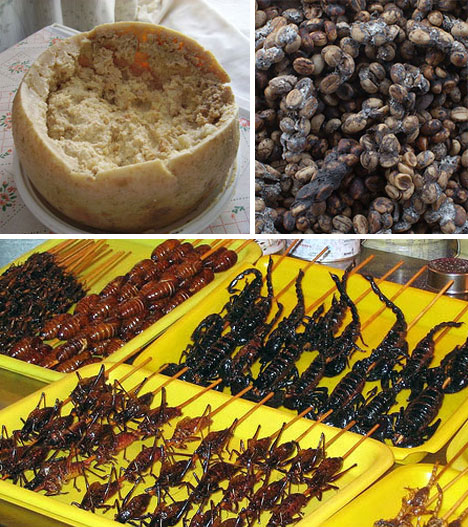 The fairly normal-looking cheese pictured above is so gross that it’s actually banned from being consumed in parts of Italy. This doesn’t keep people from making it though! The process is the same as normal cheese, until one adds live maggots to the mix. The maggots eat the cheese and it passes through their system. One has to either suffocate the maggots right before eating, or eat it with them still wriggling, or the cheese can turn toxic. It is aptly named, “maggot cheese.” The coffee beans above are called Kopi Luwak, and enjoy a similar passage (through the mouth of a Civet, all the way through). And of course, bugs. Lots of bugs. 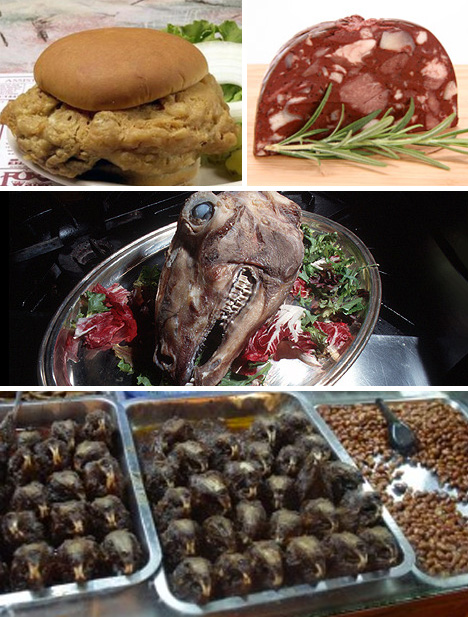 Fried calves’ brain is not as uncommon as one would think. The sandwich pictured above can actually be found in certain areas of the US. Head cheese is a European dish that involves cooking the head of a sheep and then chopping up the meat. Natural gelatins hold it together enough to slice for sandwiches. Pacha is a dish found in Iraq that is quite simple to prepare: boil a sheep’s head. Just in case you thought large mammals were the only ones in danger, check out these rabbit heads, served up for lunch in China.