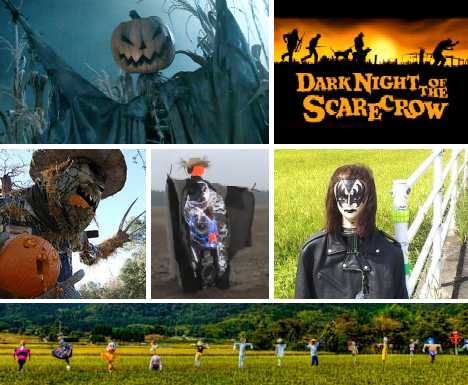 Not all scarecrows are outstanding in their fields (they just look that way) and not many scarecrows are creatively constructed – most farmers have other, more pressing concerns. Through design or by default, however, some scarecrows rise above their humble origins and scare a lot more than just crows. Hay, it’s in their jeans! 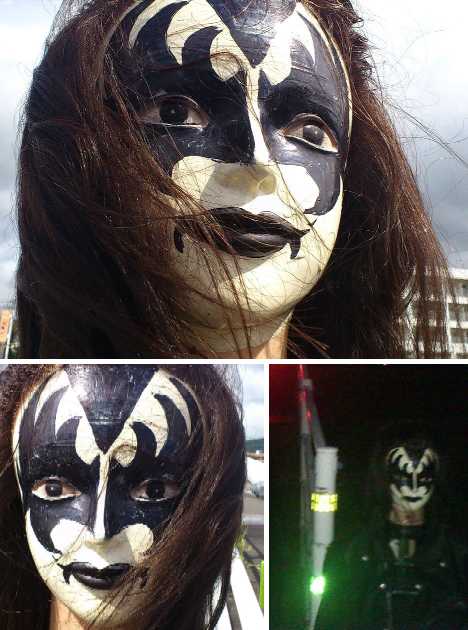 This demonic scarecrow used to rock & roll all night but now he just rocks… when the breeze is blowing. Better not let Gene Simmons know about this scarecrow or the Japanese farmer who installed it may receive a letter from a lawyer demanding payment of a licensing fee. 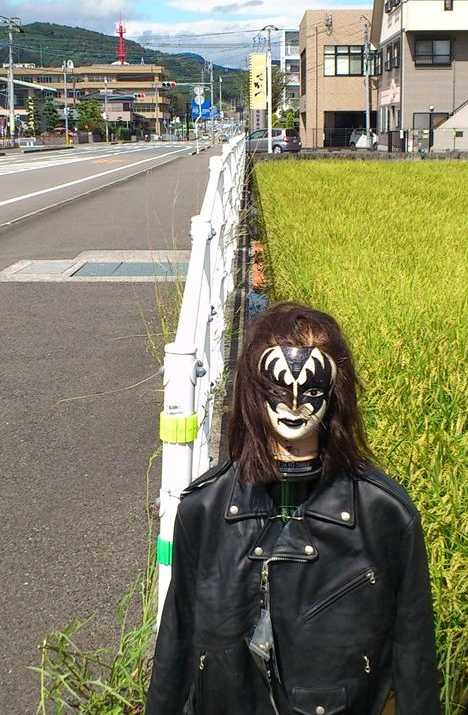 What do the local crows think of this KISS Army of one? They’re not saying, but every time one comes near the scarecrow breathes fire and spits blood. 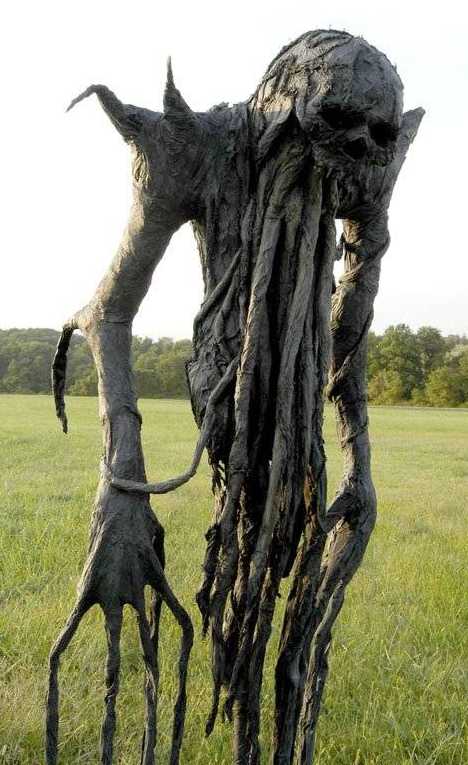 Ever wonder what an Orc from the Lord of the Rings film series would look like if it was struck by lightning in the middle of a meadow? Wonder no longer… and just be glad you’re meeting this epic scarecrow in broad daylight. Notice there are no crows on the scarecrow or anywhere else – they may be birds but they’re no birdbrains. Mmm, birrrrd brraaaainnns!!!!!

Dark Night of the Scarecrow 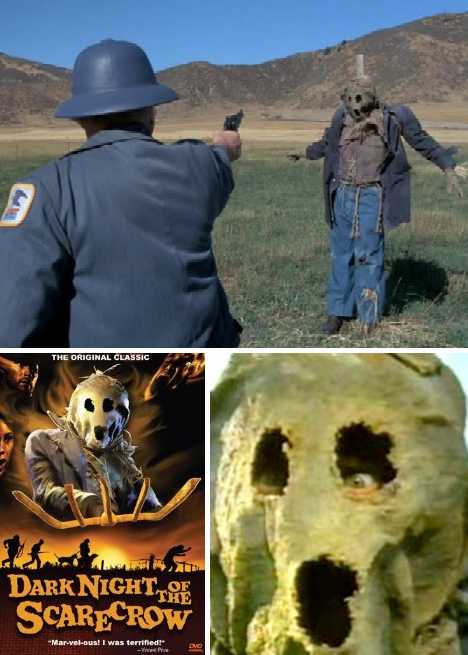 The 1981 film Dark Night of the Scarecrow didn’t win any Oscars but it did succeed in erasing any residual cute factor engendered by Ray Bolger in The Wizard of Oz. It also gave new meaning to the phrase “going postal”. Interfere with delivery of the U.S. Mail? That’s a shootin’.

Dark Night of the Scarecrow’s plot, if we can call it that, roughly centered on a dim-witted local yokel who hides out from vengeful vigilantes inside a scarecrow. Not the ideal hideout but we did say he was dim-witted. If he only had a brain! 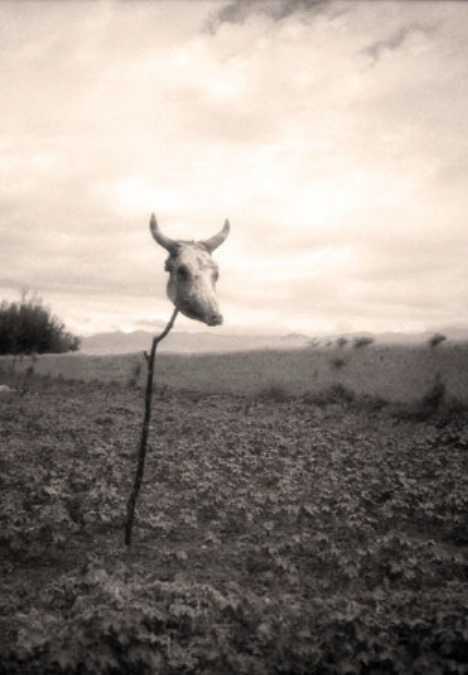 If farming (and not that other thing) is the oldest profession, then scarecrows are older than culture itself. What did the first scarecrows look like, and how scary could they have possibly been? The minimalist scarecrow above, photographed in 1932 in rural Iran, gives us a good indication of both.

Too Ghoul for School 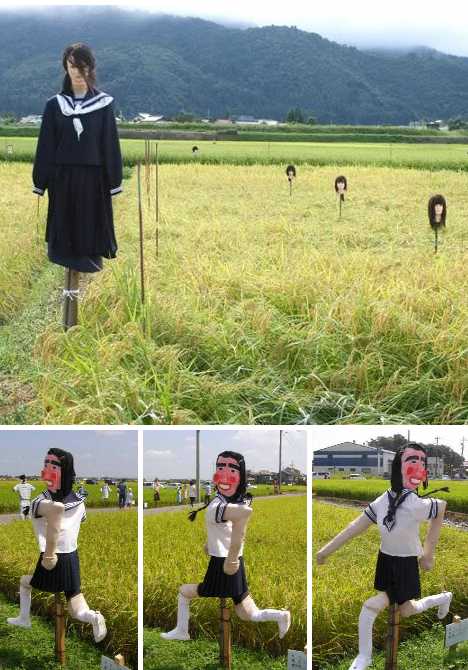 (images via: Toychan and Look Around Kawagoe)

Recycling old clothing is a very good thing. Recycling old Japanese sailor suit school uniforms to make the world’s creepiest scarecrows, not so much. One wonders what the former schoolgirls think when they come home to visit the folks and see their straw-stuffed doppelgangers standing silently in the back forty. That’s the signpost up ahead – your next stop, the Scarecrow Zone! 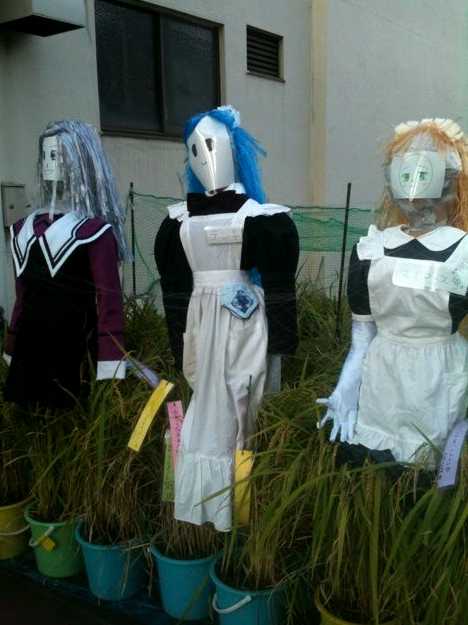 If it isn’t schoolgirl uniforms it’s maid outfits – sweet and adorable in real life, dark and disturbing when used to clothe scarecrows. At least the fields are kept clean and are well dusted. 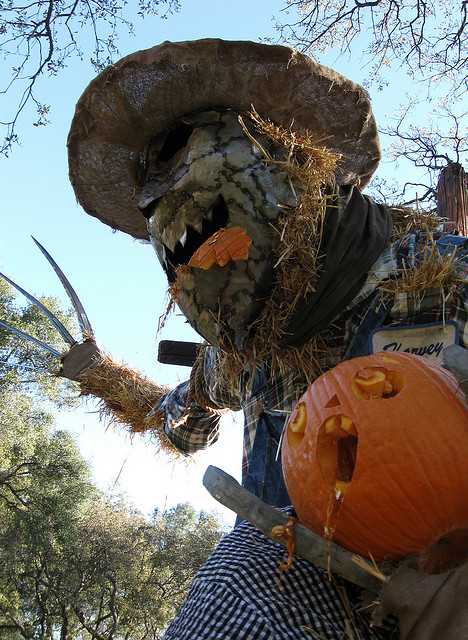 Look who showed up at the peaceably-named Auburn Community Festival! Looking like the idiot lovechild of Freddy Krueger and The Thing from The Fantastic Four, this oversized guardian of all things agricultural wants you to know his favorite time of year is harvest time slash clobberin’ time… with emphasis on the slash. 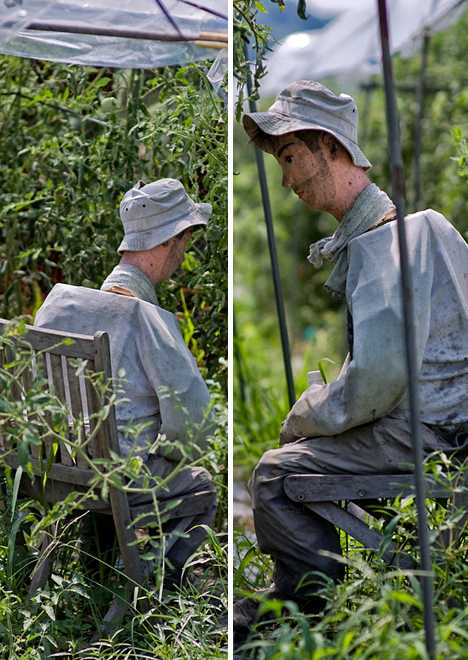 Seated deep within the verdant undergrowth threatening to take over a forlorn Japanese open-air greenhouse, it’s a wonder any crows could even see this serious-looking scarecrow let alone be afraid of him. Perhaps he’s just lulling them into a lowered state of alertness… for the LULZ, of course. 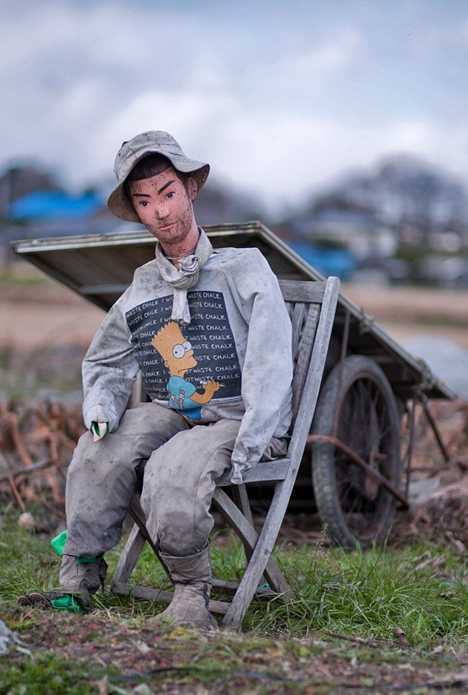 Wasting old clothing is almost as bad as wasting chalk, and the melancholy mannequin above does double duty disseminating both messages. Yep, it’s the same serious-looking guy from the previous image though summer has flown away like a well-fed crow… DOH!