A Ziggurat For Cats 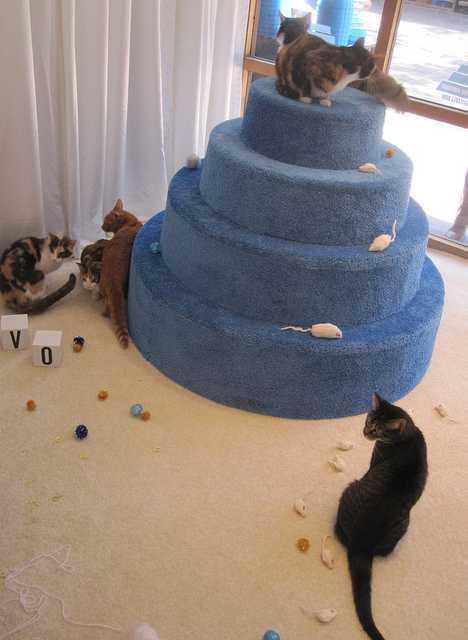 At the close of the 1960’s, The Beatles filmed their final live performance on the rooftop of the Apple Corps building in London, England. Just over 40 years later at the close of the 2000’s, DEVO debuted their new album Something For Everybody via a UStream’d Cat Listening Party for 20 lucky felines on the (enclosed for the occasion) Warner Bros. Records patio in Burbank, California. Seriously now, where would you rather be? 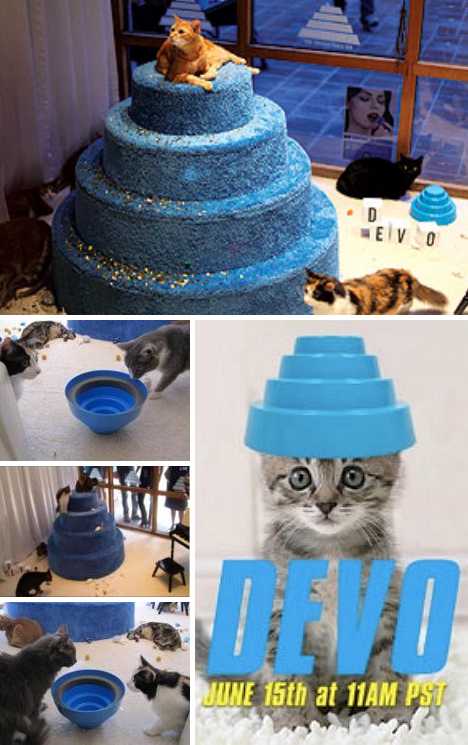 (images via: OMMA, Yahoo Music and Band Of Cats)

From their beginnings in 1972, DEVO have had their thumbs firmly pressed against the cultural pulse and choosing to associate cats with their new net-savvy release makes purr-fect sense… just check this out. Added kitteh-friendly bonuses: the cats enjoyed kitty kibble and fresh water served from inverted blue Devo Energy Domes, and their time in the listening chamber was limited to two hours. 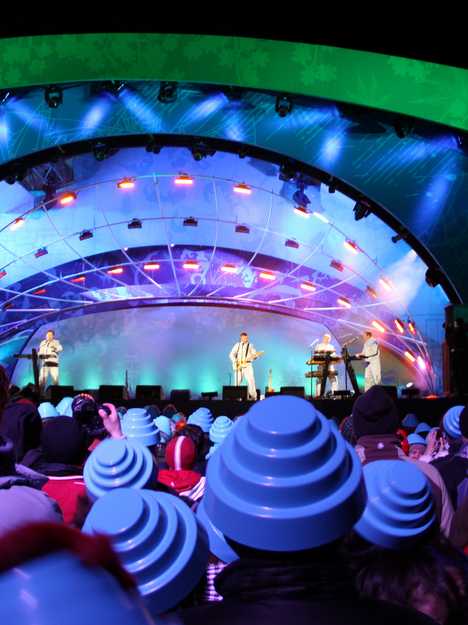 Flickr user Thomas Lewis was definitely in the right place at the right time when he cap-tured the incredible concert scene above. DEVO not only put on an awesome live concert performance after the Medals Ceremony at the 2010 Vancouver Olympic Winter Games, they contracted with Spencer Industries Inc. of Dale, Indiana beforehand so that up to 3,500 electric blue plastic Energy Domes were available for purchase by concertgoers. 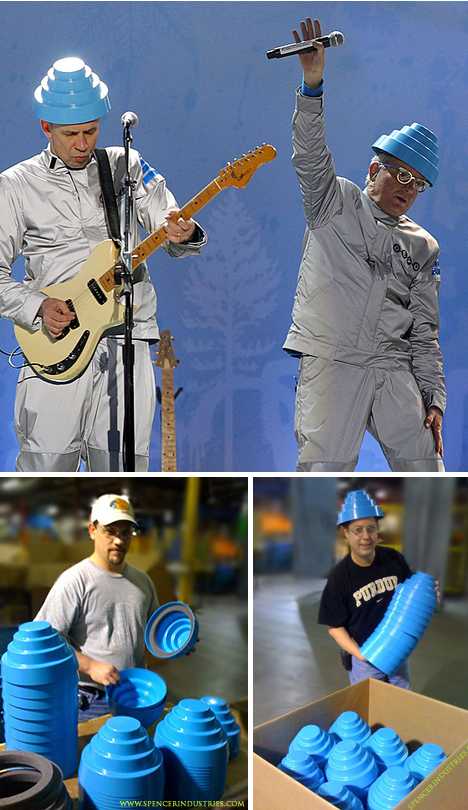 If you missed the concert you’re surely a sad potato but fear not, Spencer Industries made enough blue Energy Domes to keep the store shelves at ClubDevo.com stocked for some time to come. You can order red Energy Domes from the site as well as other spud-swag sure to satisfy any true DEVO-tee. 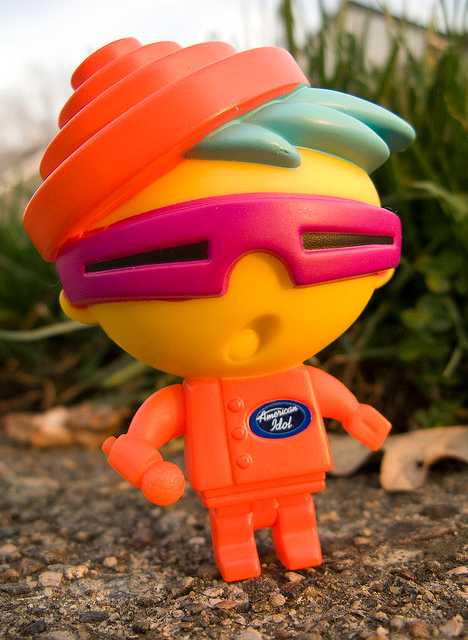 What does DEVO’s Gerald V. Casale think about New Wave Nigel, the singing and Energy Dome-wearing Happy Meal toy rolled out in June of 2008 as a promotional piece by McDonald’s and American Idol? Just tell us what you think, Jerry: “This New Wave Nigel doll that they’ve created is just a complete DEVO rip-off and the red hat is exactly the red hat that I designed, and it’s copyrighted and trademarked.” DOH! But of course permission was asked for before the design went into production, right? “They didn’t ask us anything. Plus, we don’t like McDonald’s, and we don’t like American Idol, so we’re doubly offended.” DOH! DOH! 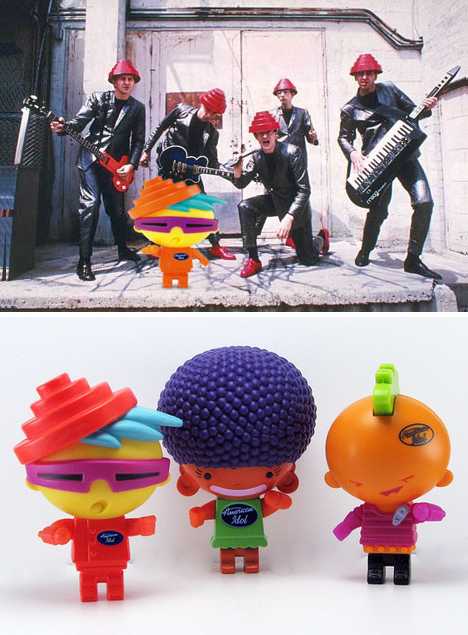 (images via: High On Fire and A Fool In The Forest)

Don’t quit now Jerry, you’re on a roll: “The very same people that wanted nothing to do with DEVO and looked down on DEVO and condescended (to) DEVO… enough time’s gone by that they go, ‘Hey, you know those guys are synonymous with what was new about New Wave.'” Well, we ALL can agree about that. In the end, no lawsuit was filed and according to Jennifer Gassen (a lawyer at the law office of David Blau, Devo’s attorney), “Any issue with the McDonald’s ‘New Wave Nigel’ promotion has been amicably resolved on mutually agreeable terms.” Yep, I’m lovin’ it! 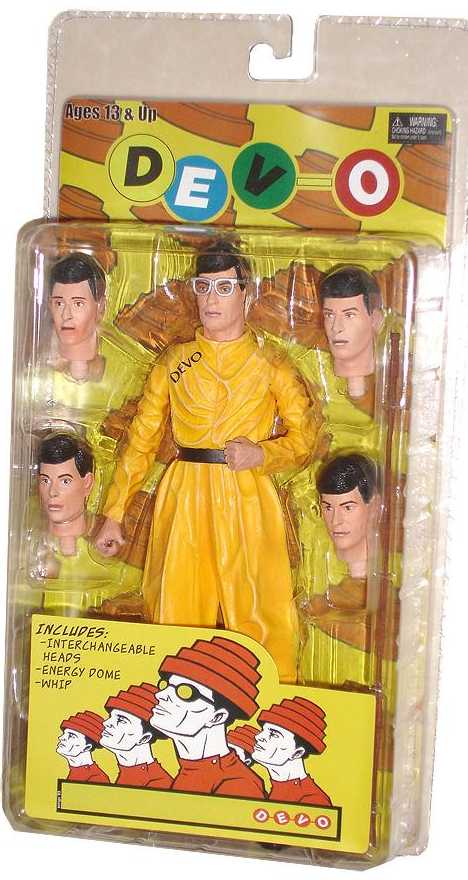 Besides, there are much better DEVO action figures out there (from ClubDevo.com to be exact) that ARE officially licensed and yes, they do come with an official (albeit very small) DEVO Energy Dome. Let’s see now… one Dome; five interchangeable heads. Seems legit.