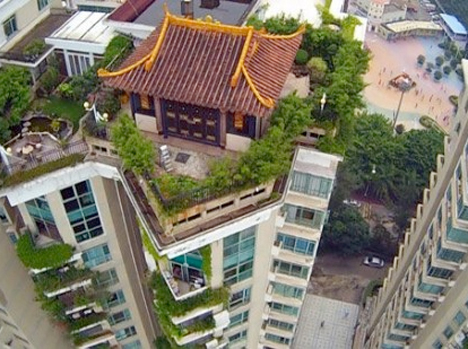 The man who built his very own luxury mountain palace atop a condo tower in China – illegally – is hardly alone in his endeavors. A Chinese microblogger spotted what looks like another unsanctioned resort on the roof of a 21-story luxury apartment complex in Shenzhen, complete with lush landscaping and a temple. 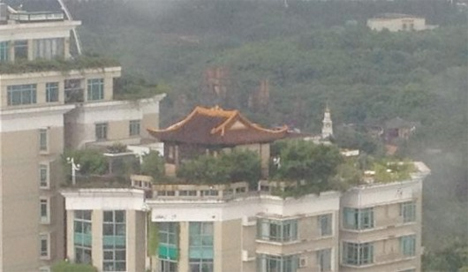 While it’s clear that the stone penthouse was built without permission, this particular rooftop paradise is shrouded in mystery. It has been situated on top of the apartment building for at least three years, but nobody knows who it belongs to, or why it appears to be under such tight security, including cameras, guard dogs and a fingerprint scanner.

A video taken from a helicopter gives us a glimpse at the complex, which appears to include gardens and a pond as well as the gold-tiled temple itself. Tenants fear the suspected illegal construction could jeopardize the structural integrity of the entire building. Neighbors report that golden sheets of joss paper, which is burned to honor ancestors, occasionally floats down from the temple’s perch, leading them to believe it’s used for traditional Chinese religious practices. 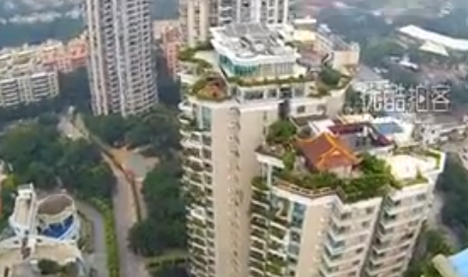 According to the South China Morning Post, a local property owner told reporters that the person responsible for the temple might be the director of Nanshan district’s Residential Property Management Office, a man named Xiong. “We once had a meeting [regarding the temple] and required it to be demolished. We put up notifications. But [Xiong] installed a security door and refused to let demolition people near [the structure.] The [problem] has still yet to be resolved.”