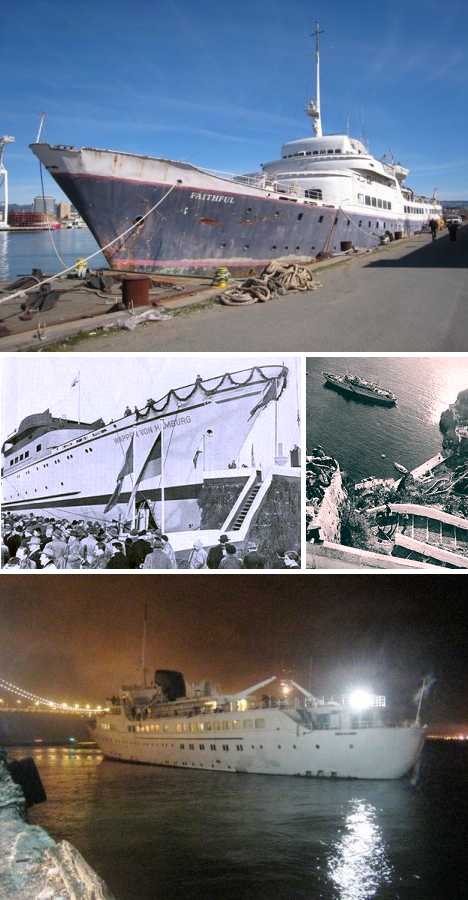 The MV Aurora has come a long way since 1955 when it was launched, as the Wappen von Hamburg, from the Blohm & Voss shipyards in Hamburg, West Germany. The 2,496 ton, 1,600 passenger cruise liner has since sailed under the names Delos, Polar Star, Pacific Star, Xanadu, Expex, Faithful, and finally in 2010, Aurora. The ship hit bottom, so to speak, in 2007 when the City of Alameda, California officially declared it abandoned; two years later in 2009 the then-Faithful was featured on an episode of Life After People. 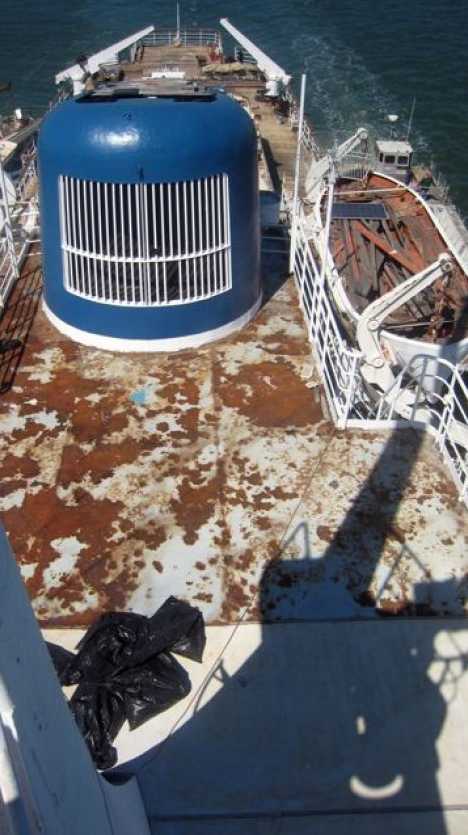 Currently owned by Christopher Willson and undergoing extensive (and expensive) restoration by fits and starts, the Aurora exists day to day in a sort of legal limbo: unwanted by almost every port it’s been docked at, the ship is now under threat of being evicted from its current berth at the port of San Francisco’s Pier 38 and if movement isn’t possible, it could be seized by the Port and sold for scrap. 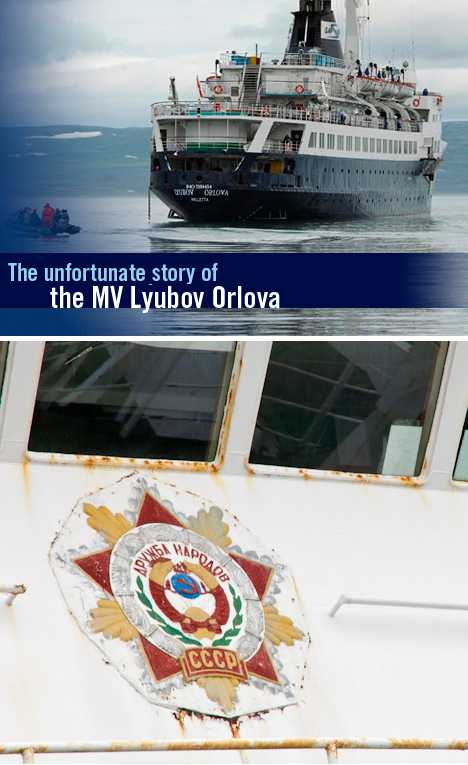 Weighing 4,251 tons and measuring 295 feet from stem to stern, the Yugoslav-built MV Lyubov Orlova was one tough cookie. The ice-strengthened Mariya Yermolova-class cruise ship was launched in 1976 with the express purpose of exploiting the lucrative Antarctic and Alaskan cruise market, which it did quite successfully… for a while, anyway. Originally owned by the Soviet Union-based Far East Shipping Company, the Lyubov Orlova began to show her age in the early 2000’s and by early 2010 the ship had been seized and impounded in St. Johns, Newfoundland due to mounting debts. 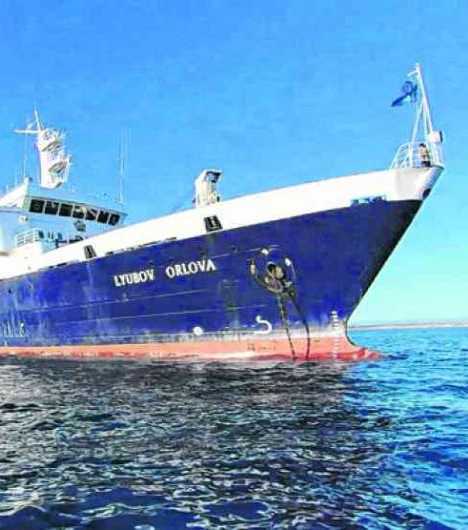 (image via: All Boats Avenue)

In February of 2012, the Lyubov Orlova was sold to Neptune International Shipping who planned to tow it down to the Dominican Republic to be broken up for scrap. Legalities being what they are, the ship and its tugboat tow didn’t get under way until late January of 2013. Newfoundland winter weather being what it is, the tow rope snapped after just one day at sea and the Lyubov Orlova was on its own, unpowered and at the mercy of wind and waves. Declaring the vessel to be a danger to nearby offshore oil platforms, Transport Canada then sent another tug out to lasso the rogue ship, tow it further east into international waters, and cut it loose… seriously! 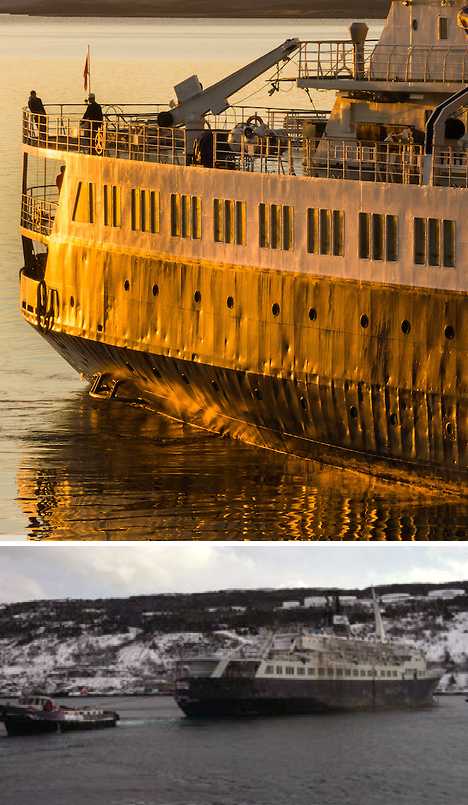 (images via: Tom Dempsey/PhotoSeek.com and CBC.ca)

The ship was last seen on February 23rd of 2013 drifting 1,300 miles off the western coast of Ireland. On March 1st, a signal was received from the Lyubov Orlova’s emergency position-indicating radio beacon indicating it was 700 nautical miles off the Kerry coast. Since EPIRBs are programmed to broadcast automatically when exposed to seawater, it’s presumed the ship may have sunk. The keywords are “may” and “presumed”… it could still be out there, a real ghost ship! 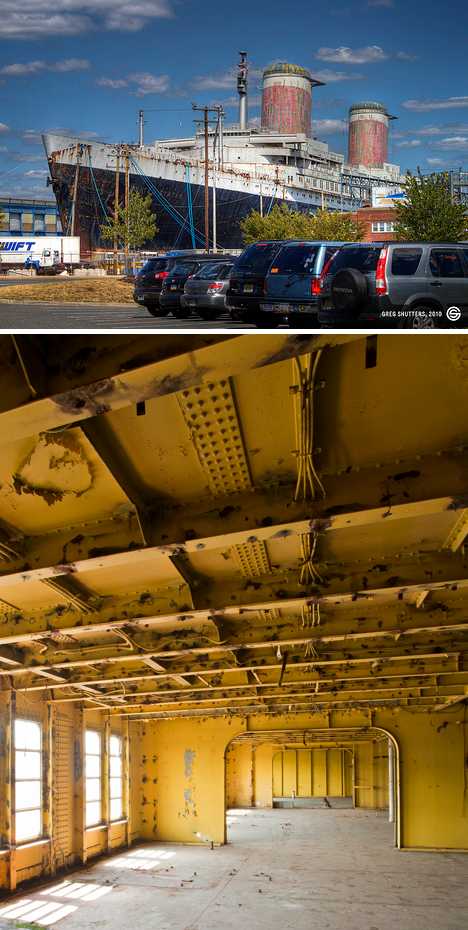 (images via: Greg Shutters and Behance)

The state-of-the-art ocean liner SS United States broke the transatlantic speed record for passenger ships on her maiden voyage in July of 1952, completing the ocean crossing in 3 days, 10 hours, 40 minutes at an average speed of 35.59 knots (65.91 km/h; 40.96 mph). It was all downhill from there, though the liner enjoyed an exemplary service career before being withdrawn from service in 1969. 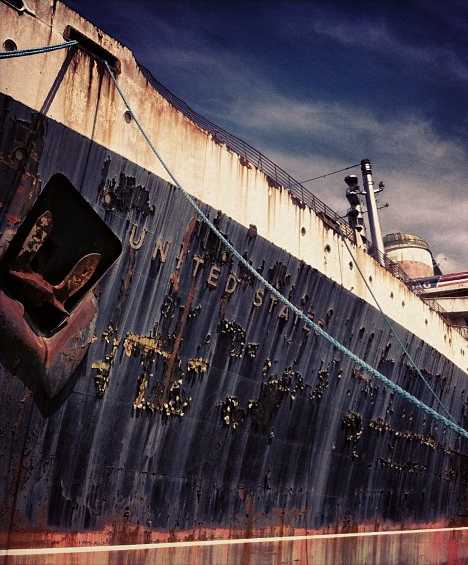 In 1996 the ship was towed from Norfolk, Virginia to Pier 84 in South Philadelphia where it rests to this day, unloved and unwanted, her formerly bright contrasting colors inexorably fading and peeling. If there was ever an ideal poster child for the current state of the passenger liner industry, it’s the SS United States. Kudos to Flickr user Liz Kallikak for the above evocative, warts & all image of the unloved and unwanted liner.