The Dutch-built jumbo passenger & vehicle ferry Free Enterprise III began regular cross-Channel service between Dover and Calais almost as soon as it slid down the slipways in 1966. In 1984 and after a long and incident-free career, the ship was sold to a Maltese concern and was renamed the Tamira. 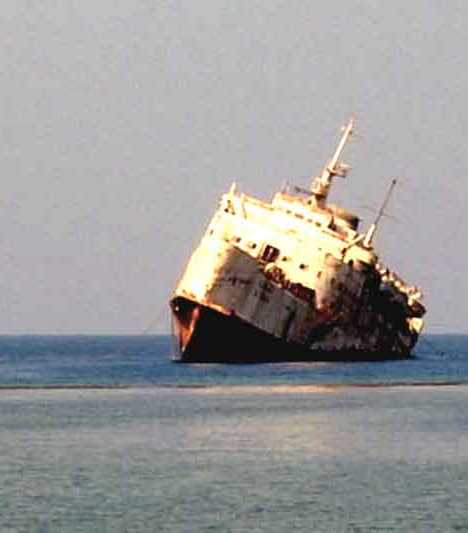 A second stint on the English Channel as the Mona’s Isle beginning in April of 1985 didn’t work out: the ship was laid up in October 1985 and subsequently sold to Egypt’s Sadaka Shipping group in 1986. Renamed the Al Fahad, the ferry performed with aplomb until 2004 when she ran aground on a famously dangerous reef near Jeddah, Saudi Arabia where she joined a host of other grounded, abandoned and forgotten hulks blistering in the hot Arabian sun. 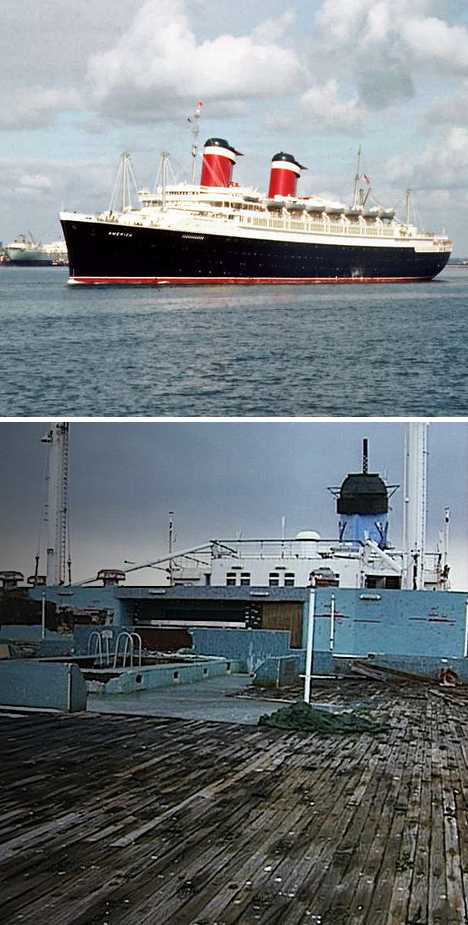 (images via: That Hartford Guy and SSAmerica)

The ocean liner SS America was launched on August 31st, 1939 and although the timing was less than optimal, the 1,202-passenger liner went on to have an illustrious 54 year career as respectively, the SS America (at three different times), the USS West Point (with a troop-carrying capacity of 7,678), the SS Australis, the SS Italis, the SS Noga, the SS Alferdoss, and finally the SS American Star. The 663.5 ft (202.23 m) long ship weighed 26,454 tons and during the Second World War was fitted with four 5″ guns and 12 anti-aircraft machine guns. 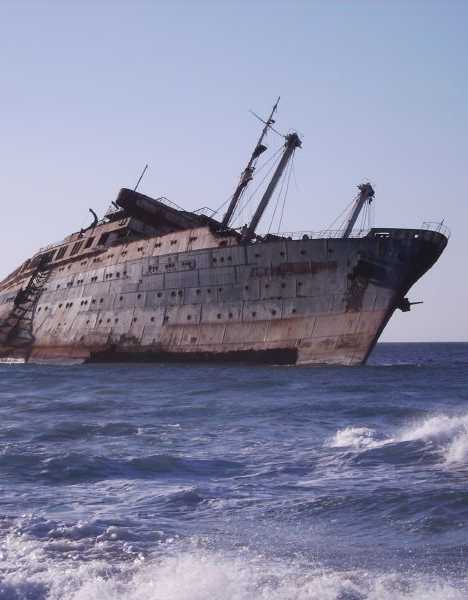 In its final iteration as the American Star, the well-worn liner was sold in December 1993 to owners bent on refitting it as a five-star hotel ship (where have we heard that before?) to be moored off Phuket, Thailand. Mother Nature had other plans, however, and what followed was the maritime version of a low-speed train wreck. Cast adrift from its towing boats in a violent thunderstorm, the powerless and propeller-less vessel ran aground off the west coast of Fuerteventura in the Canary Islands. Within 48 hours, the storm’s pounding surf had broken the liner’s back and it was given up for lost. Thanks to Flickr user Tim Middlecote for the image above, taken on December 8th, 2005.

In 1996 the stern section collapsed into the sea. From November 2005 to April 2007, the bow section suffered a successive series of collapses. By March of 2013, the ship’s superstructure was only visible at low tide. Though its end was agonizingly slow, one thing can be said of the former SS America: she didn’t go down without a fight.

The most notorious recent example of a buoyancy-challenged large passenger liner is the Italian cruise ship Costa Concordia, which struck a reef and partially sank on January 13th, 2012 off the coast of Italy’s Isola del Giglio. The disaster cost 32 lives (with 2 people still officially missing) and roughly $500 million, the latter figure referencing the ship’s value after being declared to be a “total loss”.

Though hope that the Costa Concordia will someday sail again has been abandoned, the ship itself has not: salvage operations began a mere month after the tragic accident and the liner was successfully re-floated on September 17th, 2013. Current plans are for the Costa Concordia’s hulk to be towed to an Italian port sometime in 2014, where it will be broken up and sold for scrap. It’s a fate many would gladly assign to the doomed liner’s captain who, by all rights, should go down with his ship… sooner or later.