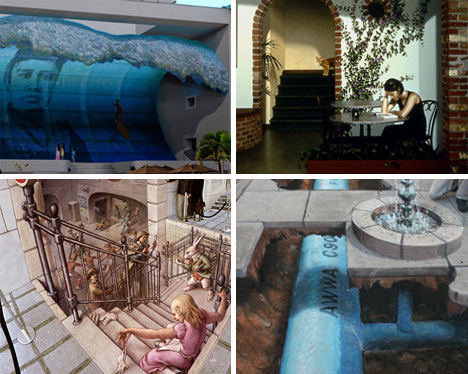 Hyper-realistic paintings and drawings can make us pause and wonder whether they’re real, but there’s another, even more deceptive, form of super-realistic art that’s been in use since ancient times. Trompe l’oeil means “trick of the eye” in French, and this type of painting definitely lives up to its name. With examples that date as far back as ancient Greece and Pompeii, this deceptively realistic art form features pictures that seem to jump out at the viewer, drawing them into a mysterious, often whimsical world. 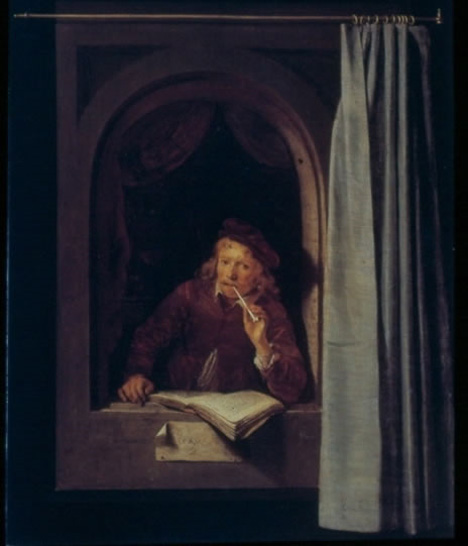 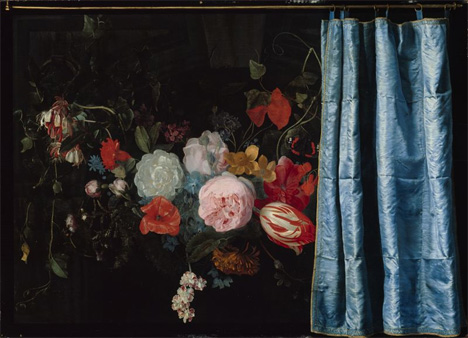 The oldest report of a trompe l’oeil painting dates back to ancient Greece. Zeuxis, a very talented painter, challenged Parrhasius to a contest: the artist who painted the more realistic painting would win. Zeuxis’ still-life painting was so realistic that birds came down from the sky to peck at the grapes on the canvas. Satisfied with his obvious victory, Zeuxis told Parrhasius to pull aside a pair of tattered curtains so that Zeuxis could see his rival’s painting behind them. But Parrhasius’ painting wasn’t behind the curtains – it was the curtains. The original piece has been lost to time, but the above trompe l’oeil paintings by Gerard Houckgeest and Adriaen van Der Spelt/Frans van Mieris pay homage to Parrhasius’ deception. 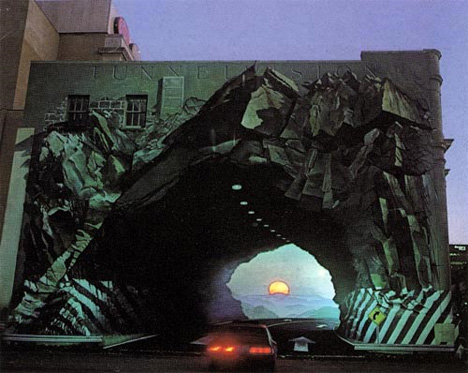 While it sounds very similar to photorealistic painting, trompe l’oeil is slightly different in that it strives to look like an actual three-dimensional object or scene, and photorealistic paintings strive to look like a photograph of an object or scene. Classic trompe l’oeil paintings often took on the form of a hallway, an archway, or an extension of a room. Or, like this public mural from South Carolina artist Blue Sky, they can aim to completely transform an architectural object (here, the side of a building). 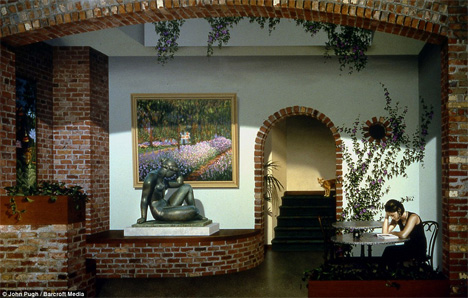 In fact, such murals have been used in buildings for thousands of years to give rooms an illusion of more space. Many anecdotes have been told of the hapless visitor who walked into a wall or tried to touch an object, only to find that he was the victim of a trompe l’oeil mural. The incredible piece above, by John Pugh, seems to give a view into another room, complete with a stairway and a woman quietly reading. But in fact, the entire scene is an amazingly realistic painting. 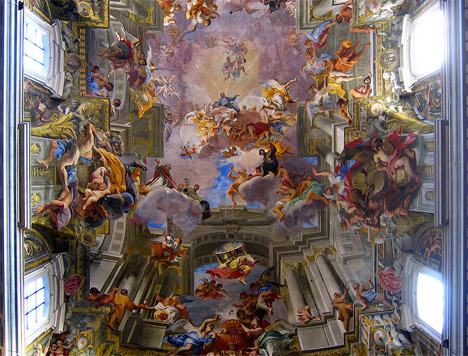 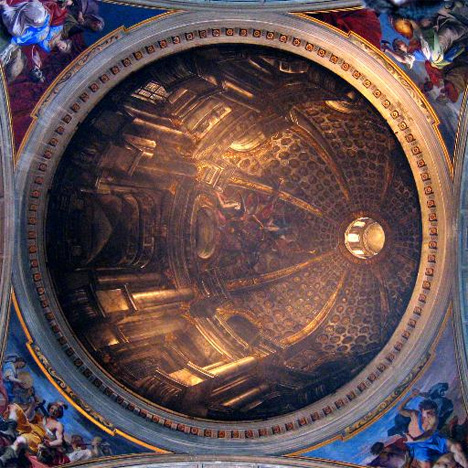 A specific type of trompe l’oeil mural that was very popular during the Renaissance was the ceiling mural. Murals painted in this fashion appeared to greatly increase the area of the room – sometimes even adding artificial architectural elements like domes – while depicting a beautiful religious scene above. The two examples above were both painted by Andrea Pozzo in the 17th century in St. Ignatius’ Church, Rome. Religious ceiling frescoes can still be seen today in many ancient churches in Europe, and contemporary versions can be spotted in some American government buildings, theaters and other public places. 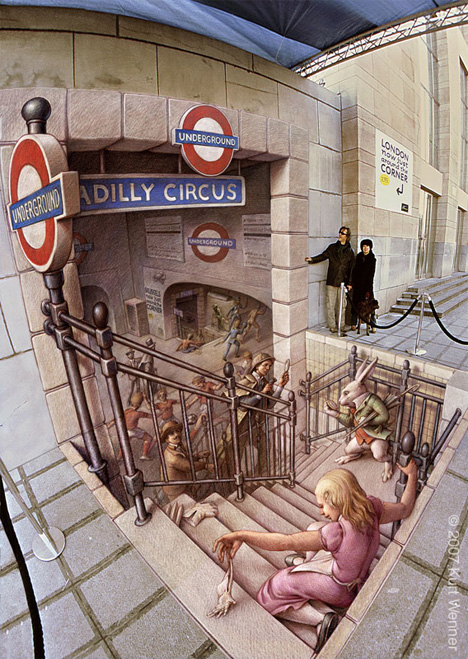 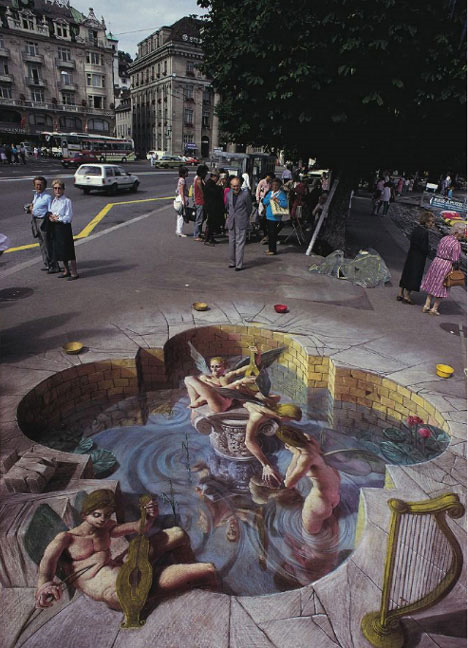 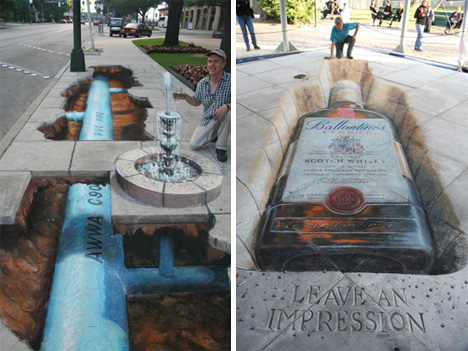 Today, illusion paintings don’t have the same artistic admiration they once did, mostly due to our being able to create extremely realistic art through other means. But illusion painting does require a great deal of artistic skill, and some artists are trying to bring the art form back. Some of the most popular modern-day trompe l’oeil pieces are public art, like the amazing 3D chalk pieces seen in streets around the world from artists like Kurt Wenner and Julian Beever. 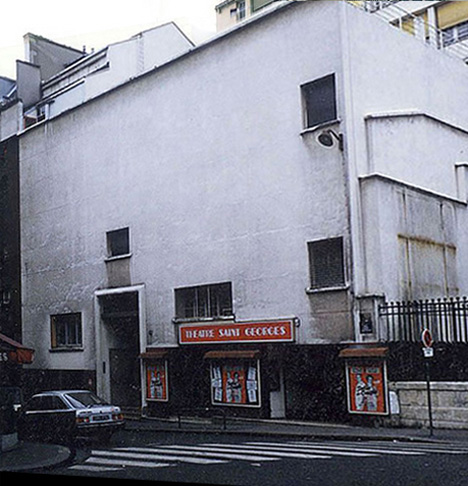 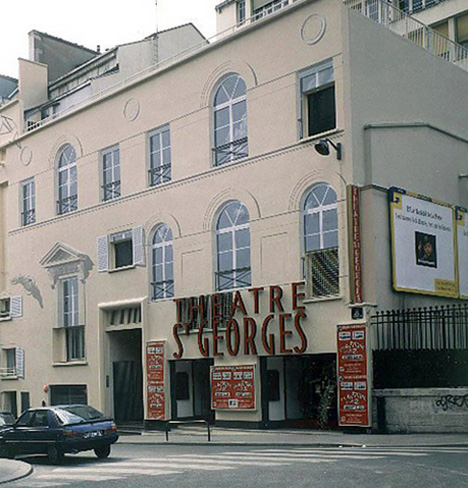 Trompe l’oeil paintings can also be seen both inside and outside buildings, such as Paris’ Saint-Georges Theatre, above, which was completely transformed by mural painter Dominique Antony. This particular illusion is so masterful that, without a “before” picture, it’s very difficult to tell exactly what the painted elements are. Antony blended artificial architecture into the building’s facade to make it appear newer, brighter and more welcoming. 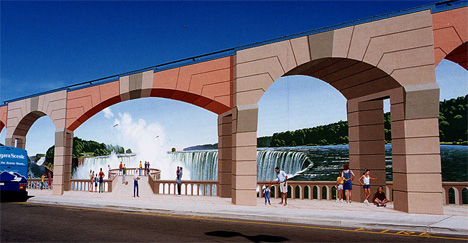 This mural on the side of a shopping mall in Niagara Falls, New York, is a well-known trompe l’oeil piece that has been fascinating tourists since its creation. The mural, by Eric Grohe, depicts an extremely realistic scene of tourists at Niagara Falls. The illusion leads the eye to believe that it’s not just a flat wall, but an actual walkway out to a viewing platform. 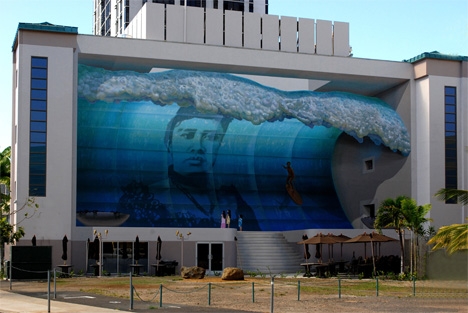 John Pugh is a well-known contemporary American trompe l’oeil artist. This mural resides on the side of a building in Honolulu and depicts Queen Lili’uokalani, the last reigning monarch of Hawaii. The giant wave, Queen’s face and surfer are spectacular, but the most amazing part of the painting is evident in a story told by the building’s owner. As the mural was nearing completion, the owner arrived at his building one day to find a group of firemen standing under the painting and laughing. They’d been driving by and stopped to rescue the children on the wall, thinking they’d gotten stuck up there. The children were, of course, part of the mural. This type of trick is a classic part of the playful trompe l’oeil style.