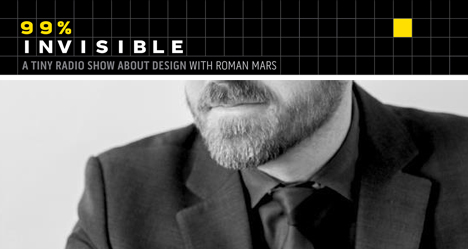 There is no witty wordplay nor shocking truth in our title today, but that is quite by design – we simply did not want risk underselling Roman Mars, the maker of a radio show that covers architecture, design and cities at a level more than sufficiently clever to speak for itself. Below, we will share with you a hand-selected set of some of the most fascinating episodes 99% Invisible has aired to date. If you like what you hear, be sure to support the program on Kickstarter. 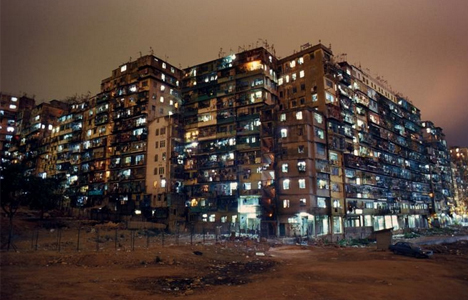 Roman Mars, host of 99% Invisible and Progam Director of Public Radio Remix from PRX, crafts artful stories that reveal hidden realities in the built environments around us and celebrate secret histories of seemingly ordinary spaces. Roman has 450,000 listeners on SoundCloud and has won praise from the likes of This American Life and RadioLab – two programs that this author has regularly compared to 99% Invisible (“It’s like RadioLab for design geeks”). 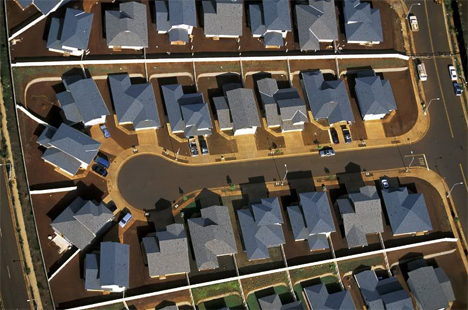 Today, from the lawless metropolis of Kowloon Walled City to the tame suburbs of the American cul-de-sac and beyond, we invite you to explore a series of compelling stories from this stellar radio show, with more links and information at the end of this article.

Kowloon Walled City, covered previously on WebUrbanist, was a lawless metropolis – a strange no-mans-land between (then) British Hong Kong and mainland China. “By its peak in the 1990s, the 6.5 acre Kowloon Walled City was home to at least 33,000 people (with estimates of up to 50,000). That’s a population density of at least 3.2 million per square mile. For New York City to get that dense, every man, woman, and child living in Texas would have to move to Manhattan.” Even with pictures, it is almost impossible to visualize – but listen to the above tale and it starts to come alive the same way a fictional city rises from the pages of a book.

The cul-de-sac once represented the American Dream, but has in the minds of many turned from a utopian ideal to a dystopian symbol of dead-end suburban life.  “When people critique cul-de-sacs, a lot of the time, they’re actually critiquing the suburbs more generally. The cul-de-sac has become sort of like the mascot of the suburbs– like if suburbia had a flag, it would have a picture of a cul-de-sac on it. Cul-de-sacs by definition aren’t well connected to other streets and they are far away town centers. For little kids, cul-de-sacs can be great, but they do have some real, quantifiable design flaws.” In the episode above, Roman and a guest explore the back and forth, exploring the evolution and alternating emphasis on urbanization and suburbanization, and changes in regulation that first allowed and are are now destroying these strange street layouts.

Skateboarding enjoys a dubious reputation in most cities – some places are set aside for skateboarders in some cases, but many of the best impromptu skate parks (at least: from the perspective of skaters) are those that are forbidden. “Though its official name is JFK Plaza, the open space near Philadelphia’s City Hall is more commonly known as LOVE Park. With its sleek granite benches, geometric raised planter beds, and long expanses of pavement, its success as a pedestrian plaza is debatable. But it turned out to be perfect for skateboarding. As skateboarding culture grew in the 1990s, LOVE Park became a Mecca of the skating world–even though skateboarding was officially banned there.” Even if you hate having a skateboarder whip by you on the sidewalk, you may find yourself softening to their perspective as you listen to this episode.

Every urbanist knows the troubled story of mid-century urban renewal, but here is a particular story of a specific building that came to symbolize everything that was wrong with modern attempts to make housing projects of the future. “The Pruitt-Igoe housing project in St. Louis became most famous at the moment of its demise. The thirty-three high-rise towers built in the 1950’s were supposed to solve the impending population crisis in inner city St. Louis. It was supposed to save the urban poor from the indignities of the downtown slums that lacked natural light, water and fresh air. And for a short while, it worked. It was a housing marvel. But when conditions started to decline, everything got very bad, very fast. It got so bad, only two decades after it was built; the housing authority blew it up.”  The image of the building’s implosion became iconic, a symbol of endings – but was it the architecture, or was it larger urban-to-suburban shift and other demographic factors at work?

As a radio show, 99% Invisible often offers insight specifically into the sounds of cities and everyday life – in this case: those little gadgets we carry with us and use so much of the time. From mysterious noises to ordinary devices, we take sound in our environments for granted – but many of these have been carefully designed. “Without all the beeps and chimes, without sonic feedback, all of your modern conveniences would be very hard to use. If a device and its sounds are designed correctly, it creates a special ‘theater of the mind’ that users completely buy into. Electronic things are made to feel mechanical. It’s the feeling of movement, texture and articulation where none exists.” In this episode, Roman talks with Sound Designer Jim McKee of Earwax Productions “about the art of designing organic sounds for inorganic things.”

What is the sound of one escalator clapping? “Ever since the industrial revolution, when it became possible for products to be designed just once and then mass produced, it has been the slight imperfections and wear introduced by human use that has transformed a quality mass produced product into a thing we love. Your worn blue jeans, your grandmothers iron skillet, the initial design determined their quality, but it’s their imperfections that make them comfortable, that make them lovable, that make them yours.” Yes, as it turns out, the auditory emissions of broken escalators have fans, some who claim that like a fine wine their sounds get better with time.

What you may never have realized in watching sports is that the natural sounds of the activity can be impossible to capture … so they have to be prerecorded, then replayed on cue during live coverage.  “If Dennis Baxter and Bill Whiston are doing their job right, you probably don’t notice that they’re doing their job. But they are so good at doing their job, that you probably don’t even know that their job exists at all. They are sound designers for televised sporting events. Their job is to draw the audience into the action and make sports sound as exciting as possible, and this doesn’t mean they put a bunch of microphones on the field. This episode of 99% Invisible is produced by Peregrine Andrews for Falling Tree Productions. It is an extract from a much longer, and really stunning doc called “The Sound of Sport.” So of all of those sounds you hear while watching the Olympics, many are faked on the spot by sound designers you are not even supposed to know exist.

But all of this is just a sound clip, a small audio sample. If you are interested in more, you should follow along on SoundCloud. Meanwhile, here are a few more episode suggestions to get you started. Get a sense of the Xanadu Effect, and begin to understand that bigger is not always better. Learn how one designer decided to make insurance sexy in What Gave You That Idea. In The Bathtub or the Boiler Room, follow someone with the boldness to enter any door that will physically open to them as they walk the halls of power in Washington, DC. Then, step back out into the city and explore The Arsenal of Exclusion – tools of urban planners, developers and designers to enhance or restrict access to public spaces.

Our thanks again to Roman Mars for helping this author (who has personally listened to every last episode) select personal as well as fan and staff favorites for this piece, and to his colleagues and partners helping make 99% possible, including Sam Greenspan and KALW San Francisco. You can become a part of the program as well by lending your support via the crowdfunding platform Kickstarter as Roman aims to make the show weekly in Season 4.