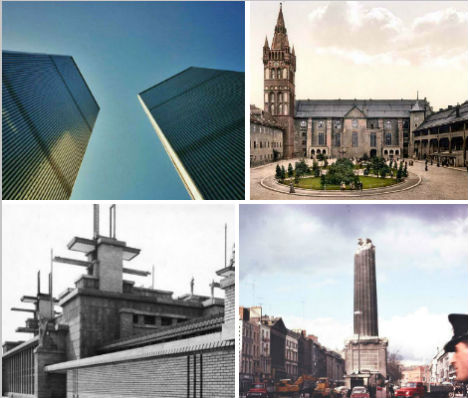 We hear so much about the vanished wonders of the ancient architectural world, it’s easy to forget about those of our more recent history, from the 19th century to the present. These train stations, palaces, monuments and skyscrapers may not be as grand and dramatic as the Colossus of Rhodes and the Hanging Gardens of Babylon, but each of them represents the loss of an icon. Whether by fire, war, demolition or terrorist attacks, these 7 destroyed architectural wonders may be gone, but they remain important symbols of our cultural heritage. 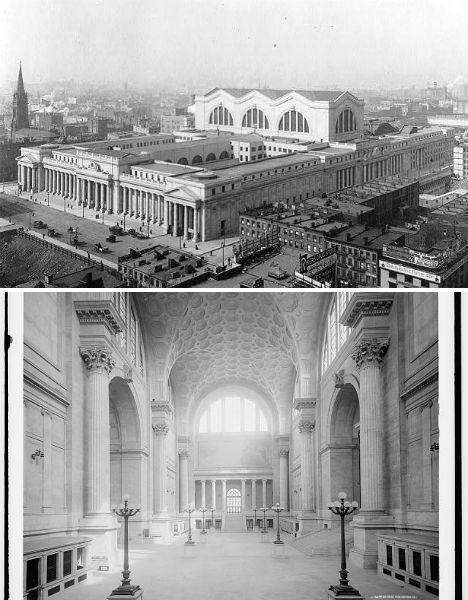 Just one of many historic New York City buildings that have vanished, the original Pennsylvania Station was a pink granite structure inspired by Roman and Greek architecture, occupying two city blocks from Seventh Avenue to Eighth Avenue and from 31st to 33rd Streets. It covered an area of 8 acres, and featured a cavernous concourse. Inspired by the Roman Baths of Carcalla, the main waiting room was the largest indoor space in New York City at 150 feet in height, and one of the largest public spaces in the world. It served as a spectacular entrance to the city, with dozens of passenger trains arriving and departing each day for cities like Chicago and St. Louis.

Its grandiosity couldn’t save it from the onward march of progress, however. By the late 1950s, intercity rail travel declined dramatically. Plans for a new Penn Station, which is now the busiest passenger transportation facility in the United States, were announced in 1962; demolition on the old building began in 1963, making way for Madison Square Garden. The cost of maintaining the building had become prohibitive. Three eagles statues from the station were salvaged and remain in the city, including two in front of the Penn Plaza and Madison Square Garden complex. 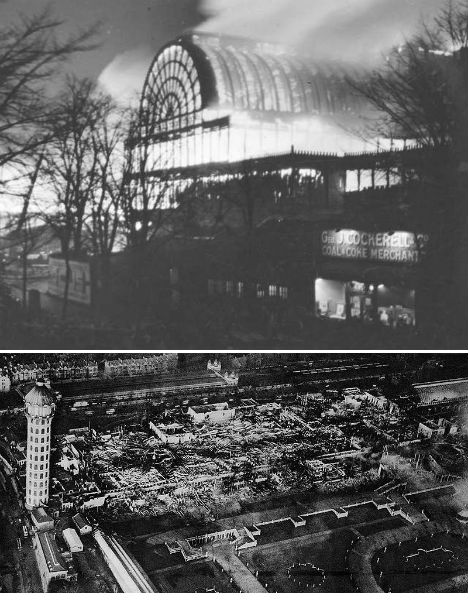 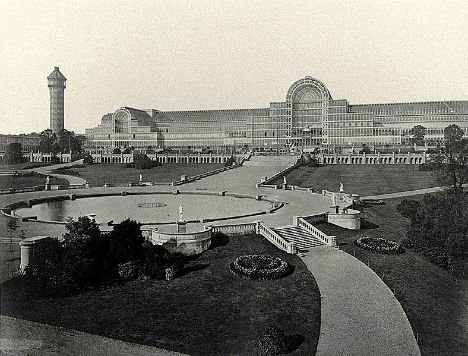 Built in Hyde Park, London to house the Great Exhibition of 1851, The Crystal Palace was a cast iron and plate glass building measuring 990,000 square feet. It hosted more than 14,000 exhibitors from around the world, displaying examples of the latest technology. The building was rebuilt even larger when the exhibition was over, in a residential area beside Sydenham Hill, to become a ‘winter park and garden under glass.’ It boasted two towers and a number of fountains with over 11,000 jets, and soon became the world’s first theme park with a rollercoaster, cricket matches and other entertainment. The gardens even had a prehistoric swamp with models of dinosaurs, just thirty years after the existence of these creatures was discovered.

But times were hard, and the owners had difficulty making enough money to keep the Palace running. It fell into financial ruin and underwent a series of misfortunes including wind damage and fires. It was declared bankrupt in 1911. In 1936, another fire broke out, this one catastrophic, and the building could not be saved. The grounds have been used for various purposes since then, and in 2011, it was announced that the Crystal Palace Football Club would build a new stadium and athletic track there. 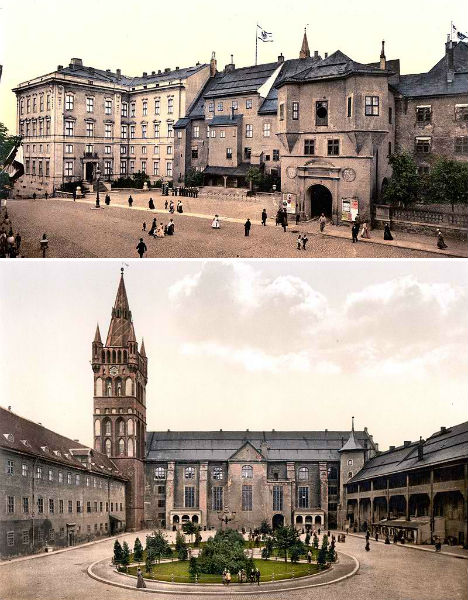 With its beginnings in the 13th century and a great expansion in the 1700s, Köningsberg Castle was an important landmark in the East Prussan capital of Königsberg (Kaliningrad) for centuries. What began as a fortress was later designated a castle, home to the Grandmasters of the Teutonic Order and then various Prussian rulers. It featured a gothic tower stretching 328 feet into the air, with 284 steps to the top. It contained an extensive library as well as a palace church. By the 20th century, many rooms were turned into a museum full of art and provincial archives.

The region was plunged into disorder and violence during World War II, and the city was bombed in a series of air raids by the Soviet Air Force, mainly in retaliation for the German bombing of Moscow. More than 90% of the city, including the castle, was destroyed by 1945, and the German population was forced out of the city by the occupying Soviets. Under their rule, the city became Kaliningrad. While the ruins of the castle’s stone walls still stood for decades, they were ultimately blown up in 1968. The site of the castle is now the city’s main square. 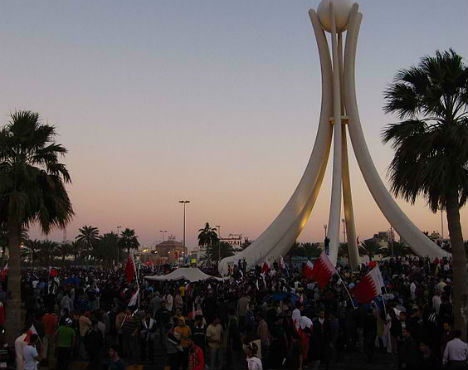 Erected in 1982 in honor of Bahrain’s first time hosting the Gulf Cooperation Council, the Pearl Monument featured six ‘sails’, representing the member nations of the council, supporting a pearl, which symbolized those nations’ shared heritage and Bahrain’s history of pearl cultivation. It was built in the center of Pearl Roundabout, located near the city of Manama’s financial district.

In 2011, the monument became central to the Bahraini uprising. Several thousand demonstrators set up tents  and obstructed traffic in the roundabout to protest the first fatality of the uprising, and police soon cracked down, killing at least four more civilians. Tanks were deployed to disperse the demonstrators, and while the Prince of Bahrain urged the government to allow peaceful protest, the camp was bulldozed and set on fire. The government tore down the Pearl Monument, stating that it had been “desecrated” by the protests and had to be “cleansed.”