(images via: Accidental Russophile and Slate)

Back back back to the former USSR we go, specifically the relatively unpopulated Altai region of Kazakhstan downwind of the Baikonur cosmodrome, where the former Soviet Union and now Russia launch rockets into space. For decades, spent stages and entire failed spacecraft have been raining down upon the Altai region. Most of the wrecks are scavenged by natives of the region who see the metal fallen from the sky as a free and useful unnatural resource. 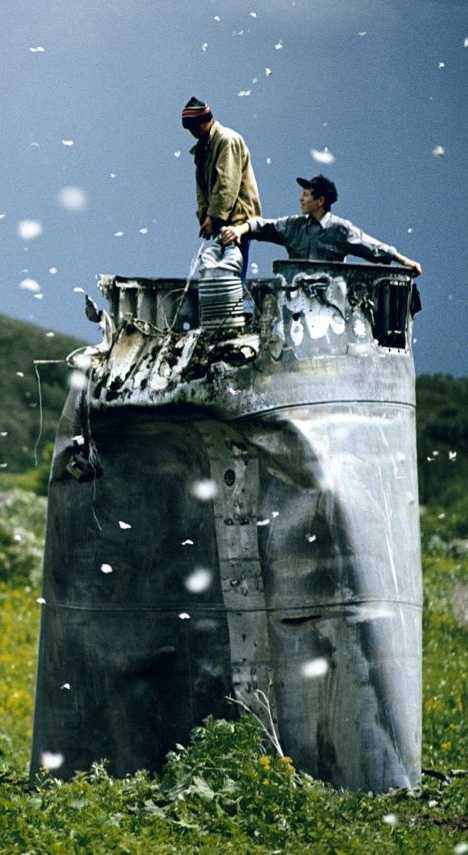 Among the crashed and abandoned spacecraft and parts scattered across the windswept plains are several Soyuz spacecraft from aborted launches. Locals compete to be the first to salvage/scavenge the metal, often arriving while the components are still burning. This is extremely dangerous for a number of reasons, the main one being the toxic and carcinogenic nature of rocket fuel residues.

Planet of the Apes ANSA Capsule 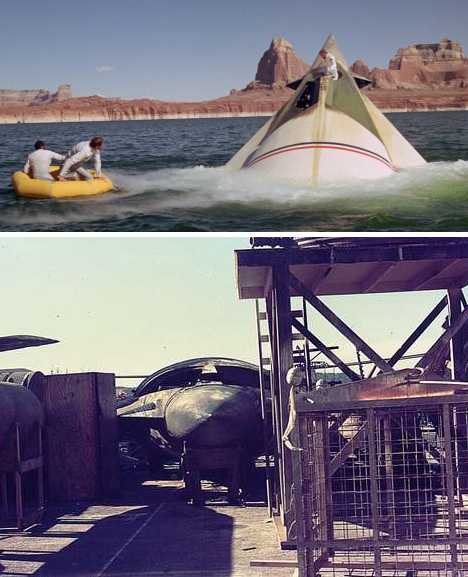 The first entry in the enormously successful Planet of the Apes film franchise was shot on location in 1967 at Malibu State Park in California, which makes the ruined Statue of Liberty Taylor (Charlton Heston) stumbles across at the film’s end seem even more out of place. The park was also home to the famous “Fox Ranch” where 20th Century Fox stored used (and often reused) movie props including the dart-like ANSA spacecraft “Icarus” that brought the human astro-, er, Ansanauts to the apes’ world.

The prop spaceship appeared to sink into the sea in the first film but was dried off, modified, and splashed down once more (on land, ouch!) for the second film in the franchise, Beneath the Planet of the Apes, in 1970. In between, the prop spaceship made an appearance in another 20th Century Fox film, The Illustrated Man. By 1975, the much-worse-for-wear prop was retired permanently to the Fox Ranch and was presumably scrapped for its metal value when Fox returned the property to the State of California.

Planet of the Apes’ CALIMA/OBERON 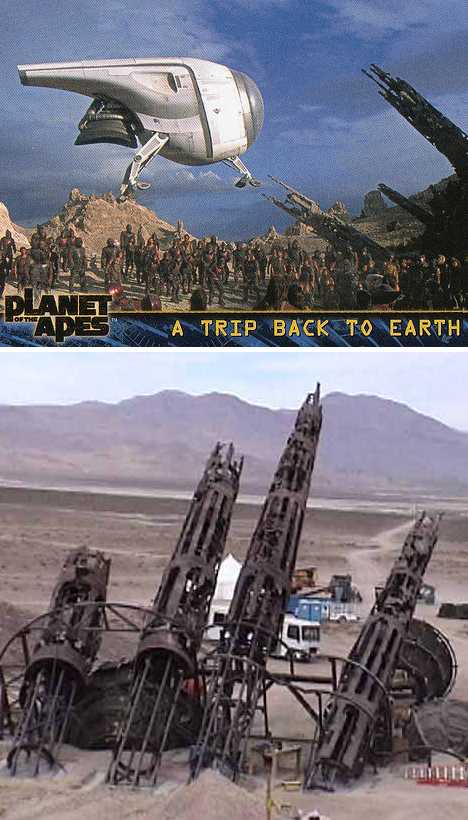 Thirty-three years after the original hit the nation’s theaters, director Tim Burton’s reboot of Planet of the Apes was released. While Mark Wahlberg is no Charlton Heston by any means, the crashed space station Oberon (or “Calima”, as the apes refer to it) is indeed impressive as it’s not a CGI creation but a realistically-sized prop.

(images via: Tombs of Kobol and Wallys Weird Voices)

Oberon/Calima was built at one of the film’s locations amid the weird landscape of the Trona Pinnacles, not far from the equally odd Fish Rocks in eastern California. While suitably imposing on film, the futuristic decrepit downed space station looks less so in pre-production surrounded by porta-potties and a pickup truck. Hey, when an ape’s gotta go, an ape’s gotta go!