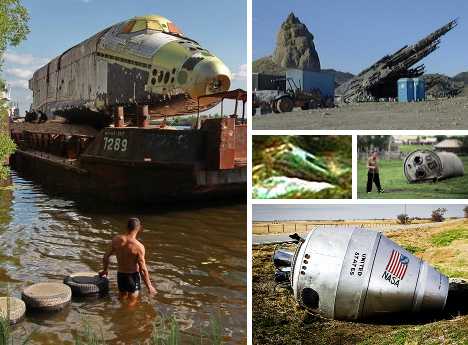 If abandoned spaceships weren’t so hard to find (please don’t look for any in Antarctica), we wouldn’t have to make them for movies, TV, art or just for fun.

(images via: No Fixed Address and RPF)

Even if you’ve never visited Coober Pedy in southern Australia, you probably have seen it via your movie or TV screen. The inhospitable desert wasteland lies in the heart of OZ’s opal mining country and the otherworldly setting has been featured as a film location for Mad Max Beyond Thunderdome, Red Planet, and Pitch Black to name just a few. The latter flick featured the above wrecked spaceship, bought about a dozen years ago by a local shop owner after filming was completed. 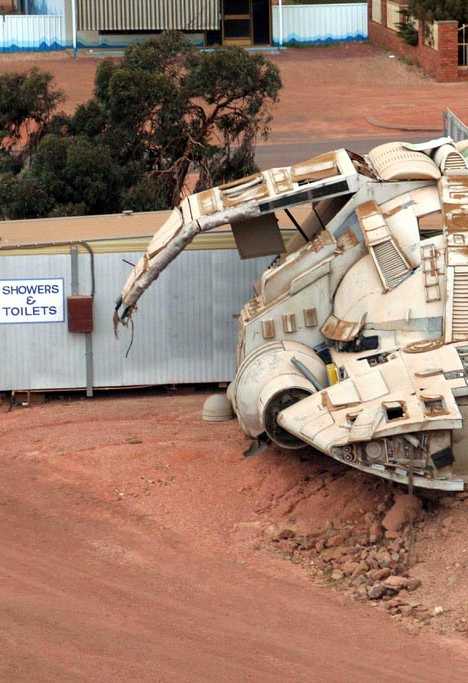 While the Pitch Black spaceship prop has held up remarkably well thanks to the Outback’s arid conditions, those who feel tempted to have themselves photographed in front of it should advise their camera-person to ensure the “SHOWERS & TOILETS” sign doesn’t photobomb the shot.

Construction crews hard at work building a bridge over Oologah Lake near Talala, Oklahoma in 1959 couldn’t believe their eyes when the driver of a cement mixer loaded with liquid cement lost control of the massive vehicle. As he swerved off Winganon Road, the truck overturned and it wasn’t long before the cement inside began to harden. The truck was salvaged, mostly… the now solid cement-filled bell was too heavy to shift and has remained in place for over a half-century. 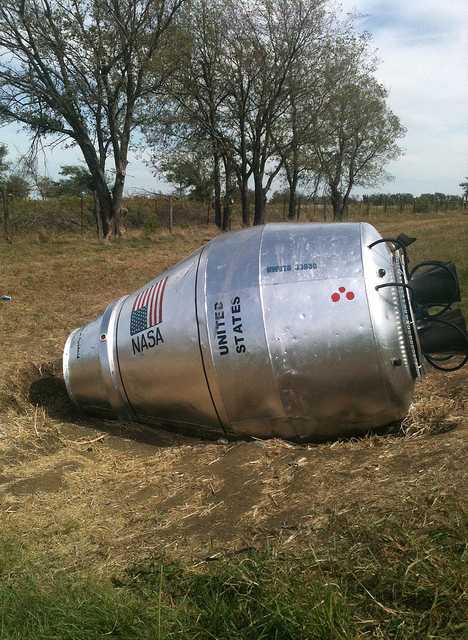 Pranksters have painted and otherwise decorated the mixer a number of times over the years; a recent redo occurring just after 9/11 when it was painted patriotically in the American flag’s stars and stripes. The latest extreme makeover dates from late September of 2011 when Barry & Heather Thomas used canning lids, garden hose and other household items to transform the mixer into a NASA space capsule as a way of celebrating their 5th wedding anniversary. Kudos to Flickr user Arkomas for posting the above cool pic.

In post-Soviet Russia, Earth crash on spaceship! On May 12th of 2002 the hangar housing Buran, Russia’s only space shuttle to be launched into orbit and land successfully back on Earth, collapsed during a severe storm. Eight workers lost their lives in the accident and the shuttle was destroyed. Not many know, however, that Buran was only the first of FIVE Soviet shuttles completed or under construction when the program was cancelled in 1993. The second shuttle was named Ptichka; the third was named Baikal. 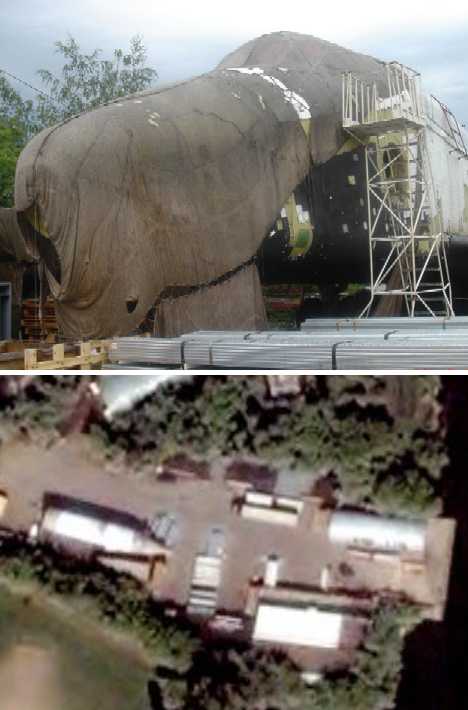 In October of 2004 Baikal, estimated to 30-50% completed, was moved from its hangar at the Tushino factory to an open-air car-park where it spent the next 7 years protected only by flimsy tarpaulins. 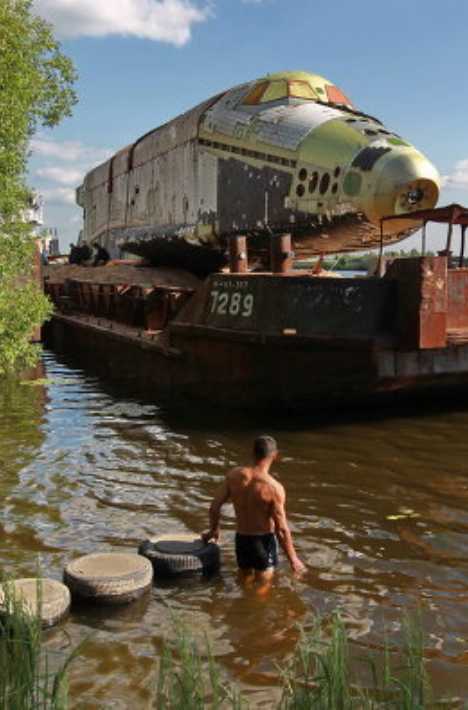 (image via: The Moscow News)

The curious image above dates from late June of 2011, when the fuselage of Shuttle 2.01 Baikal was floated down the Volga river by barge. Its ultimate destination was the MAKS 2011 international air show, which took place from August 16th through 21st at Zhukovsky town near Moscow. We don’t think that’s Russian president Vladimir Putin in the image above, returning from a bathroom break to resume towing the barge downstream, but we could be wrong (and we wouldn’t be surprised).