Flickr user Paul L Esmond brings us the ethereal and otherworldly photo above. Featuring only the twilight sky, a crescent moon and the orange roof of an abandoned Howard Johnson’s in Albany NY, Esmond’s stunning photographic composition brings together the fleeting and the lasting in perfect harmony.

The former Howard Johnson’s restaurant on Afton Mountain in South River, VA has been abandoned since 1998. The now-spireless restaurant sits among a cluster of abandoned (or nearly so) businesses that thrived when their main access road was US 250 and withered when newly-built I-64 hid them from vehicular traffic. The remarkably well-preserved restaurant (not to mention the sun-bleached candy in the coin-op machines) had a good run, however. It opened back in 1948 and finally closed in 1998, well into HoJo’s Franchise Associates Incorporated (FAI) era that ran from 1986 through 2005. 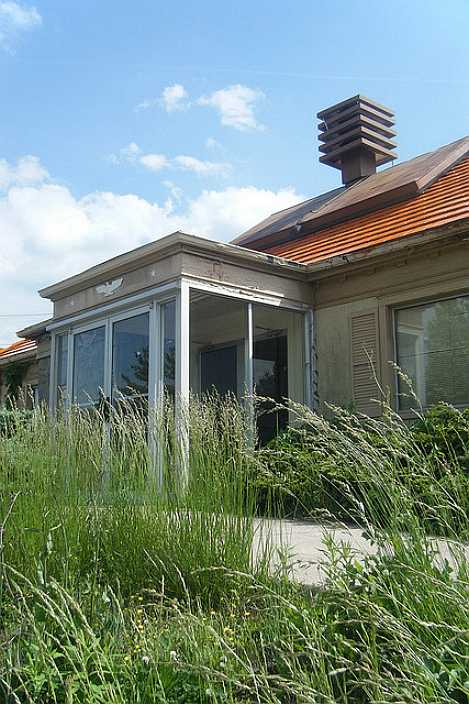 Score this victory in favor of the shrubbery; zero points for the HoJo but an honorable mention for sheer persistence in the face of aggressive botany. Seriously, it’s beginning to look like Jordy’s farmhouse from Creepshow after the meteor fell. Full props to Ben Schumin for extensively photo-documenting the eerie, zombie-like, improbably continuing existence of this abandoned Howard Johnson’s.

Flickr user Chip (cjbird88) brings us these scenes of abandonment and desolation from Bloomington, Illinois’ sizzling summer of 2012. Hard to believe the former Howard Johnson’s motor lodge depicted is just shy of a half-century old, isn’t it? Just kidding, it looks like it’s been deserted for generations. Note the isolated patches of Howard Johnson’s orange just beginning to reappear from behind the roof’s coat of cheap whitewash.According to one of the commenters at Chip’s page, the main office building (the extreme A-framed structure typical of many HoJo’s) was torn down in late 2012.