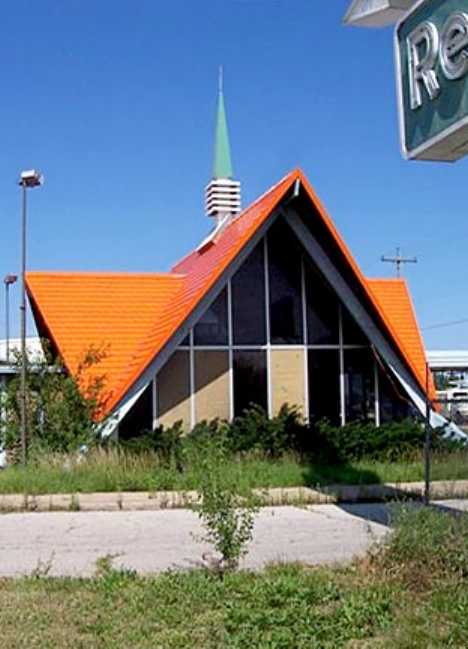 By 1993, however, HoJo’s mojo had long since faded and the former hotel and restaurant complex entered hospitality afterlife as the Liberty Inn. Most of the signage and even its predecessor’s orange and teal colors were brazenly recycled, not that there was anyone left to complain. By 2003, the Liberty Inn was on the outs and according to Scott Sargent c/o Highway Host (credited with these images) the site was abandoned soon after.

Now this is just sad… one of the last Howard Johnson’s to open was this mansard-roofed building on Clarks Falls Road (Rt 216 at I-95) in North Stonington, CT. Closing in 1985 along with many other Howard Johnson’s branded locations, one tenant after another experienced nothing but failure at the difficult-to-access location. By 2004 when these photos were taken, the decaying structure was no longer attracting interest or landscaping and it was left to the designs of graffiti artists and the clutches of rampant vegetation. 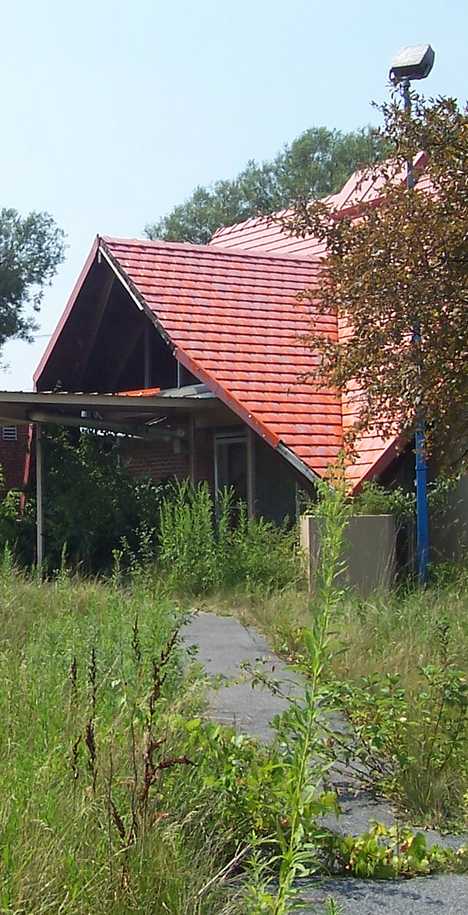 The Howard Johnson’s at Carrier Circle in Syracuse, NY has been a moldering eyesore for years but it wasn’t always that way. Kudos to Flickr user Jack Thomas for these spectacular warts-and-all images of a once-proud Howard Johnson’s as it appeared in the summer of 2005… and view many more visual records of Space Age Syracuse HoJo hospitality in decline at Thomas’ Flickr photostream.

Anyone for a dip? The Carrier Circle HoJo’s wasn’t only an eyesore, its malignant presence began affecting local businesses who have long petitioned for its demolition. When absentee owners promise grand things and pay their taxes, however, not a lot can be done. Though the clock will surely strike midnight for this cultural icon, fans of urban blight and post-apocalyptic imagery can always enjoy these twilight scenes of an American dream turned nightmarish. 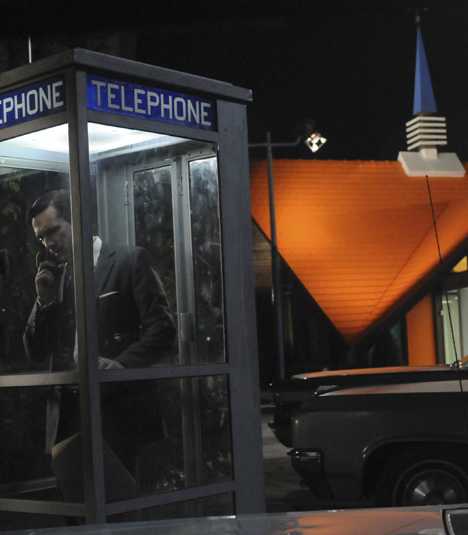 Howard Johnson’s symbolized an era in American history now relegated to fading memories and retro-chic television dramas like Mad Men. It’s therefore no coincidence the orange-roofed icon was prominently featured in one of the AMC cable network’s plot lines: episode 6 of season 5, to be exact. If one is to be abandoned in modern pop culture it might as well be at a Howard Johnson’s, amiright?