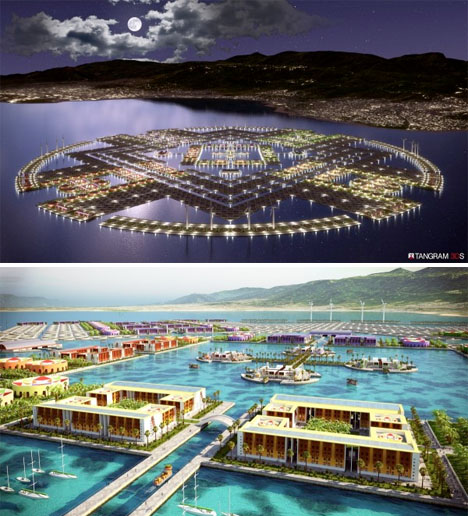 Haiti is an island nation ravaged by poverty and repeated natural disasters, such as the earthquake that leveled much of Port-au-Prince and left millions of people without safe housing. Architect E. Kevin Schopfer imagines a new floating city for 30,000 residents just off the shore offering productive, livable land that can support agriculture and light industry. The 2-mile diameter complex is made up of four neighborhoods of tethered floating modules connected by a linear canal system. Built to withstand hurricanes and typhoons, the city ca be expanded as needed. 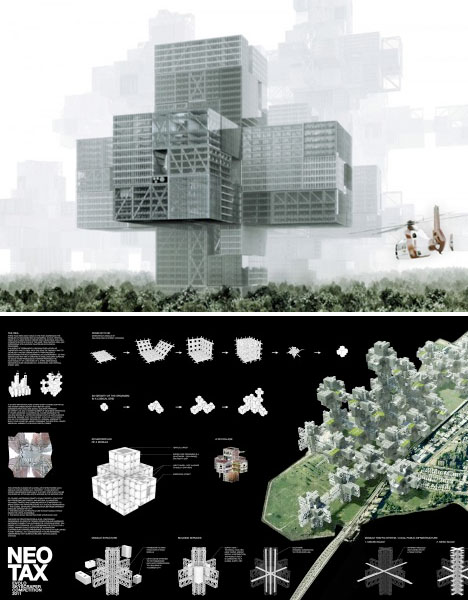 What would our cities be like if we built all of our architecture on a three-dimensional grid? This entry for the eVolo 2011 Skyscraper Competition, called NeoTax, imagines structures with small footprints that expand up and out. Organized on a horizontal and vertical street grid, it’s based on a modular system where each module can be viewed as a separate neighborhood and buildings connect to each other above ground level, enhancing mobility from one neighborhood to the next while leaving lots of green space untouched. 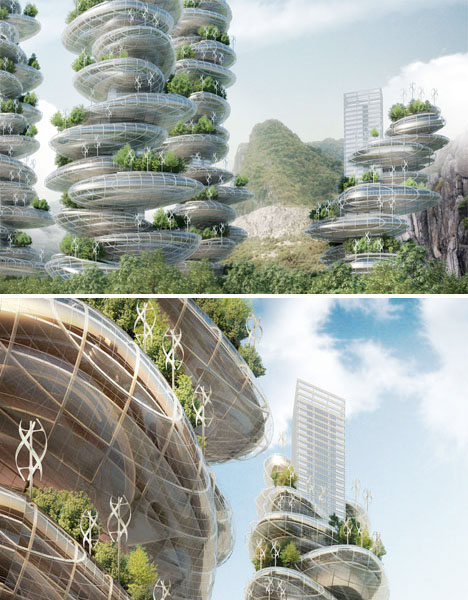 Belgian architect Vincent Callebaut is known for fanciful designs based on natural forms, like lotus-shaped floating cities. This time, it’s a vertical city for Shenzen, China, modeled after cairns, or towers of stones. “The challenge is to create a fertile urbanization with zero carbon emissions and with positive energy,” says the architect. This design for a new urban habitat centered on the rules of the natural world offers high population density and has orchards and gardens built into the residential towers. Each tower contains as many as 20 glazed ‘pebbles’  covered in solar panels and wind turbines. 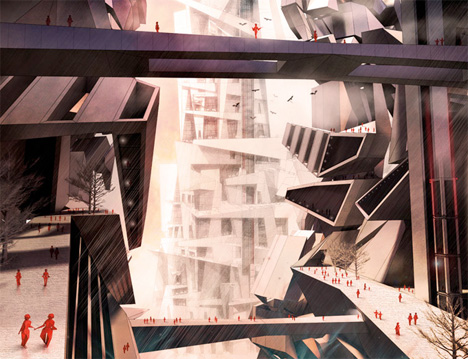 What does it mean to live in a fear-free city? This proposal created for the Now+When: Australian Urbanism exhibition at the 2010 Venice Biennale focuses on the things that make people feel free and safe in cities rather than the things that promote fear. That means building high structures with a lattice-like pattern of streets and other spaces that emphasize interconnectedness and movement. Visible links connecting the various buildings and neighborhoods at all levels make the city feel more open and permeable.