Do You Know The Way?

The abandoned microwave relay station in the rolling hills above San Jose was owned by MicroNet Inc… a futuristic name for a defunct company. The smallish 2-room building is covered in graffiti, with only the single remaining microwave dish antenna on the roof escaping the scourge somewhat due to its relative inaccessibility. 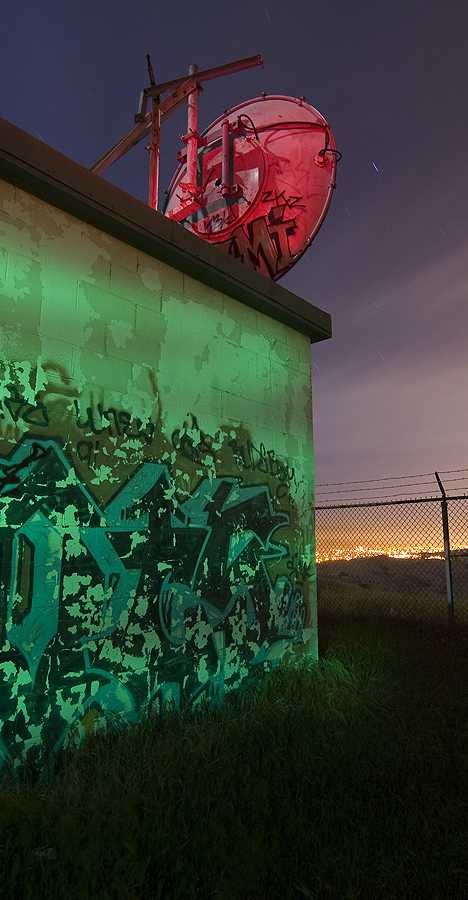 Credit Flickr user TakenPictures for these eerie images captured via the use of colored lights and a helpful though unseen full moon. Hope you didn’t cut yourself up too badly scaling the barbed-wire fence.

Florida radio station WGGG-AM 1230’s slogan was “Watching Greater Gainesville Grow”, which would be perfect if people actually watched radio. The station was a Gainsville landmark from the day it opened in February of 1946 but after a dozen ownership changes and wild swings in format from Big Bands to Top 40 to Oldies to Talk to Classical and finally Sports Talk, WGGG just couldn’t grow anymore. The images above, courtesy of Central Florida Radio, show how the station’s prospects faded graphically from 1951 to 2010.

The crackling clear images of the old abandoned WGGG building above were taken by Flickr user mattypantaloons on a crisp February morning. Though rather small and a little sad now that its working days have passed, the building still shows off its Streamline Moderne design and gorgeous glass block accents to best advantage.

(images via: ambimb and TripAdvisor)

Not many radio station buildings have made it onto the National Register of Historic Places but the KPRK radio building in Livingston, Montana can claim that honor. Missoula architect William Fox designed the building and its signature feature, a “stylized radio tower”, in 1946 and the station began broadcasting in January of 1947. Though KPRK is still operating it no longer uses the iconic Livingston building; all programming is now fed from the station’s offices in Bozeman.