Toronto once had a crack bicycle shop… and that’s where the Rob Ford jokes begin and end. Jon Bunco opened High Park Cycle & Sports in 1972 and over time became a living urban legend… not for his exemplary customer service but for his utter disdain for the concept. According to one victim, umm, visitor, “you are absolutely, positively, NOT to walk around or look around the store. You are to stand at the counter and not touch anything.” Not following these and other unwritten laws would see potential customers hustled onto the sidewalk post haste. Jon Bunco, the Soup Nazi of bicycle shops! Sometime after the quoted client visited High Park Cycle & Sports in 2011, Jon evidently had had enough and pedaled off into the sunset, likely cursing all the while.

I’d Rather Not Be In Philadelphia 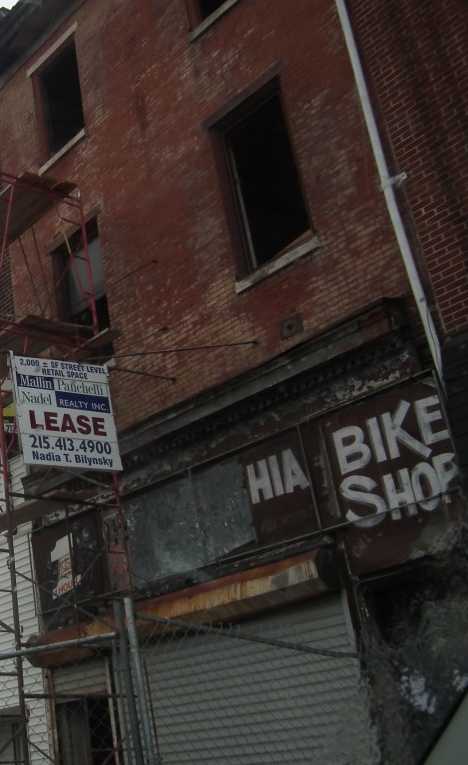 Give our regards to Broad Street? Sorry, the former Philadelphia Bike Shop at 826 N. Broad Street hasn’t been highly regarded – or regarded at all, actually – for at least four years and boy, does it show! The image above (courtesy of Google Street View) dates from 2009 but recently developers have begun demolition of the Francisville property in favor of new housing.

The Wright Way & The Wrong Way

Didn’t the Wright Brothers have a bike shop in Ohio? They went on to bigger and better things. We can’t say the same about whomever owns (owned?) this abandoned bicycle shop in Middletown, Ohio however… at least not yet. One thing we CAN say is that the shop now makes a mighty fine-looking urban abandonment. There are some scattered bikes inside to sweeten the deal. Kudos to This Hollow Earth Cycling Tours for capturing the state of the shop in the summer of 2009. 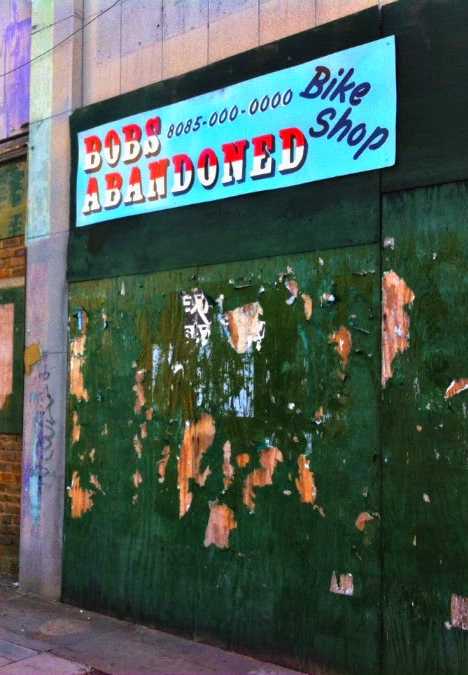 In a stunning example of calling ’em like you see ’em, artists have spruced up a row of derelict southeast London shop fronts in a most cheeky fashion. Situated just next to “Untitled Ltd.”, Bob’s motto might be “Yes, we have no bicycles” but unfortunately no one’s available to confirm or deny. That’s just bananas.