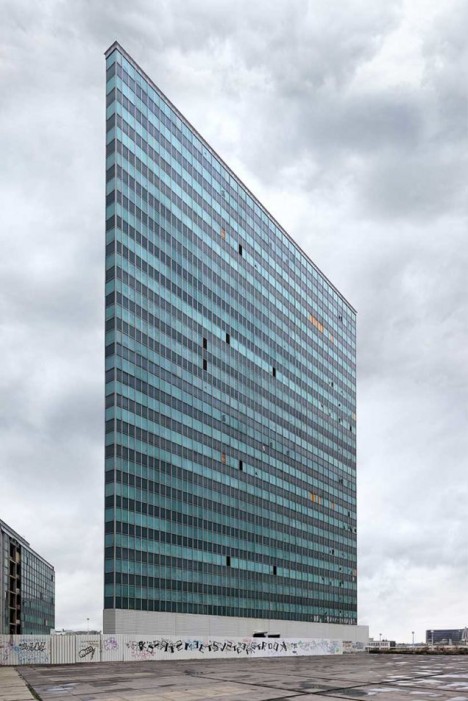 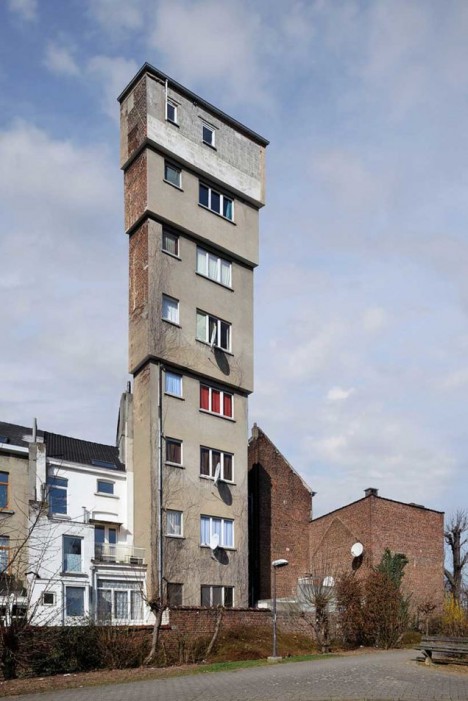 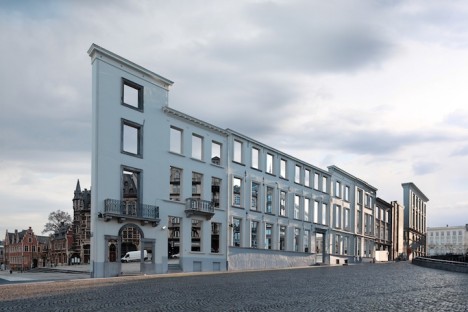 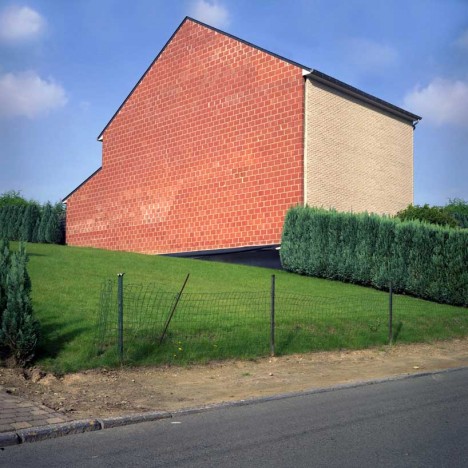 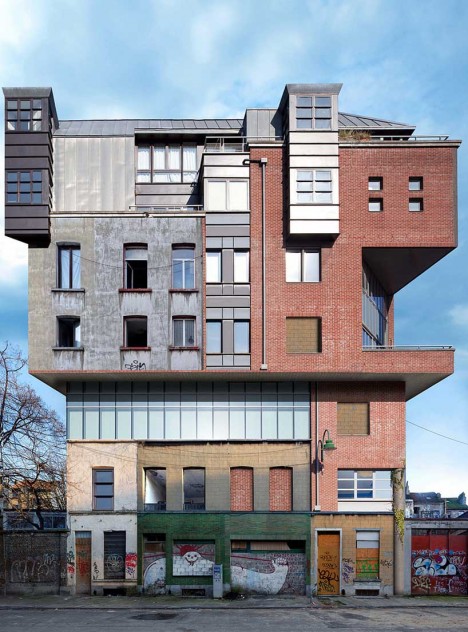 ‘Urban Forms’ by Xavier Delory explores four major themes that can be seen in nearly any European city: gentrification, the invasion of ugly corporate architecture in historic areas, hiding the truth of a place behind a shiny facade, and the ubiquitous use of Le Corbusier’s minimalist ‘domino’ concrete structural frames. Each of the buildings created by Delory feels like a monstrosity, growing beyond its logical bounds, taking shape in ways that are nonsensical and insensitive to their surroundings. Yuppie condos are indiscriminately stacked on top of graffitied warehouses in urban districts, office towers grow to sickening proportions and bland brick houses for the wealthy lack windows and, seemingly, any sense of soul. 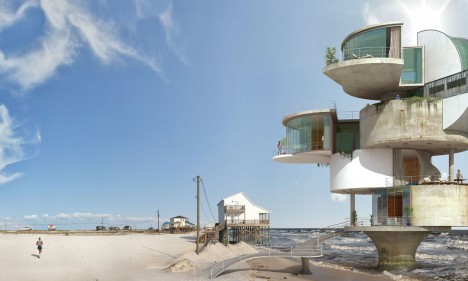 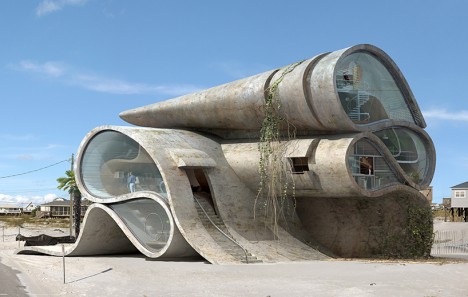 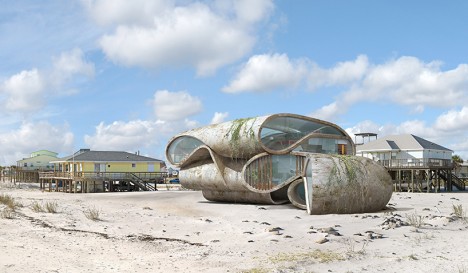 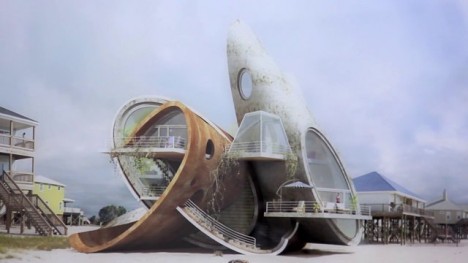 The 1,200 residents of Alabama’s Dauphin Island in the Gulf of Mexico see disastrous storms that wash their homes away on a regular basis, yet they always rebuild. This stubbornness and ability to endure inspired artist Dionisio Gonzalez to design surreal disaster-proof homes that can withstand the weather with heavy use of iron and concrete. Draped in seaweed as if they are artifacts of nature washed up on shore like shells, these buildings blend contemporary seaside architectural typologies with the aesthetics and practical value of bunkers. 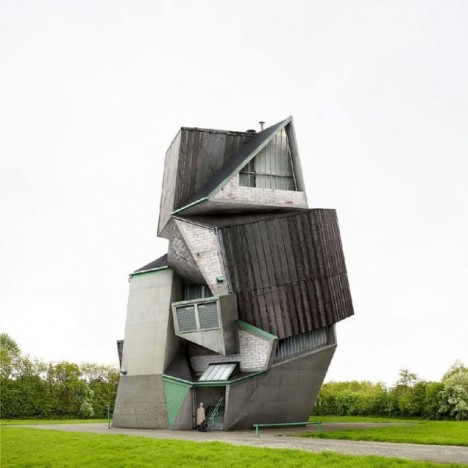 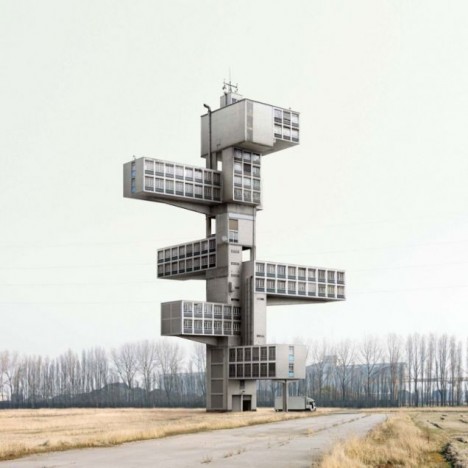 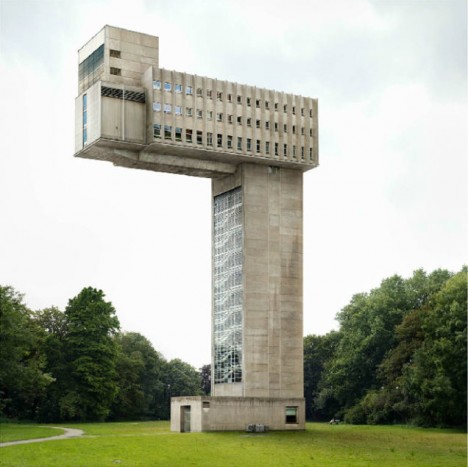 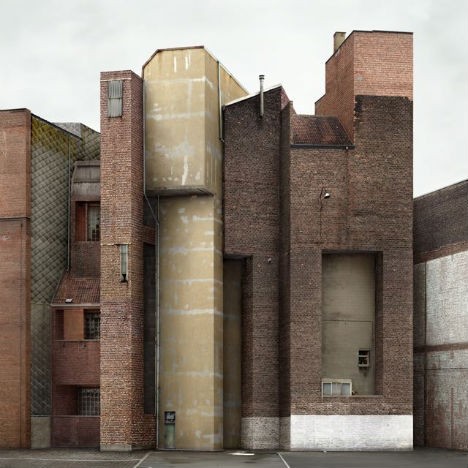 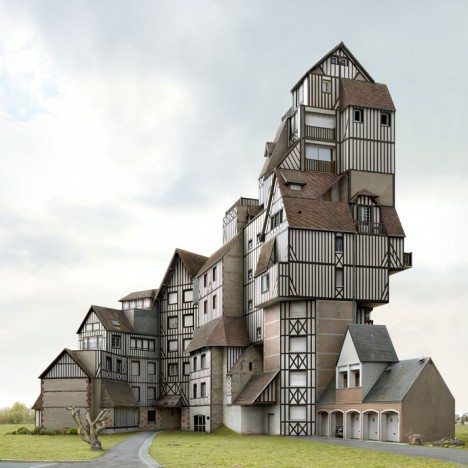 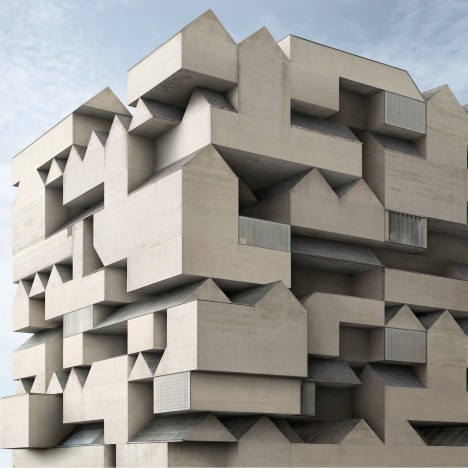 More impossible cantilevers and disturbingly windowless facades come courtesy of Belgian photographer Filip Dujardin, who photographs buildings and then manipulates them into forms that could never actually be real. Concrete towers are turned on their sides and stacked, shipping containers are stretched and added to any surface and tangles of tunnels, walkways and pipes stick out of the walls of offices. Dujardin starts with an idea of his final image and then goes out into the streets of Ghent to find just the right structures he can bend and clone in certain ways.

“Perhaps the works come out of frustration, that I actually want to play at being an architect, instead of only recording the buildings of others.” 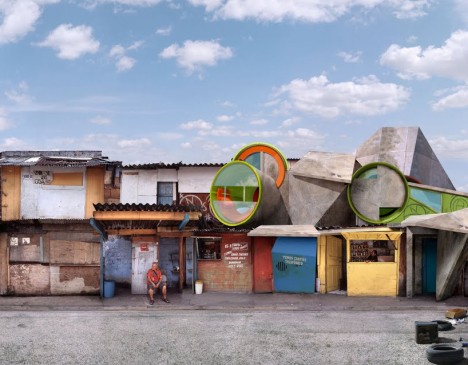 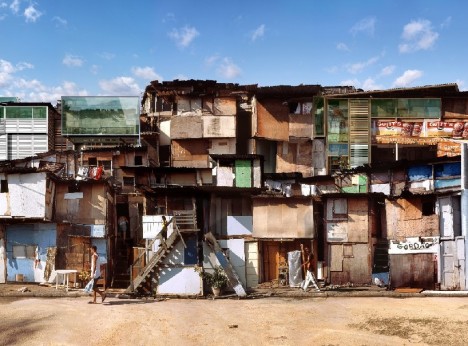 Another series by Gonzalez, ‘Favelas,’ infuses some of the world’s poorest shanty towns with futuristic and abstract architectural forms for strange and shocking juxtapositions. Glass volumes and modern concrete shapes are wedged between the colorful structures seen in traditional Brazilian favelas. It’s as if the forces of gentrification moved into these communities with no regard for harmony of any sort – social or visual.