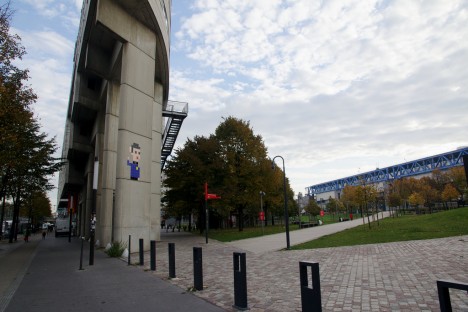 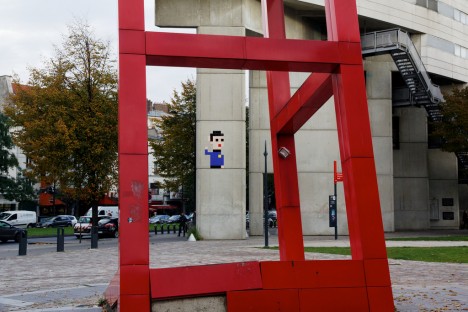 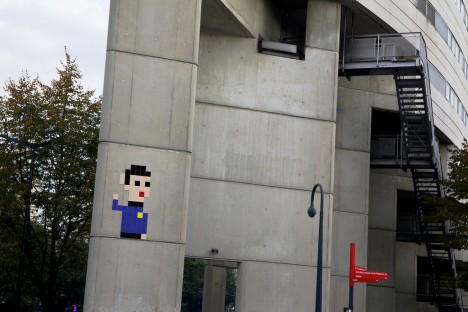 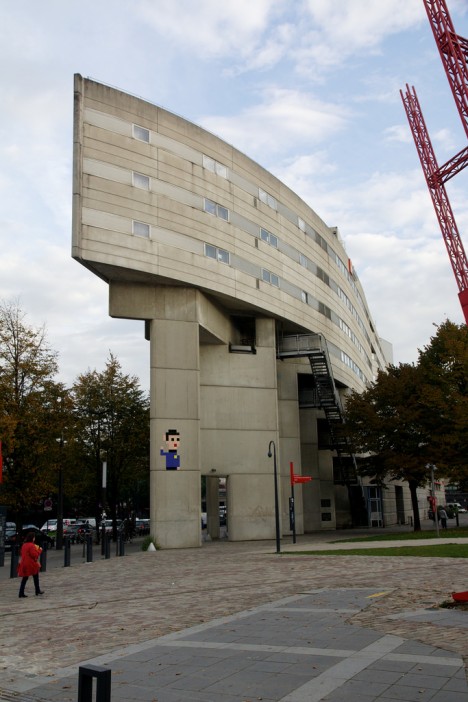 Both the style and format of the piece recall the work of Space Invader, a self-described ULA (Unidentified Living Artist) who’s been mosaic-bombing since 1998. Spock and graffiti aside, that really is a cool building. 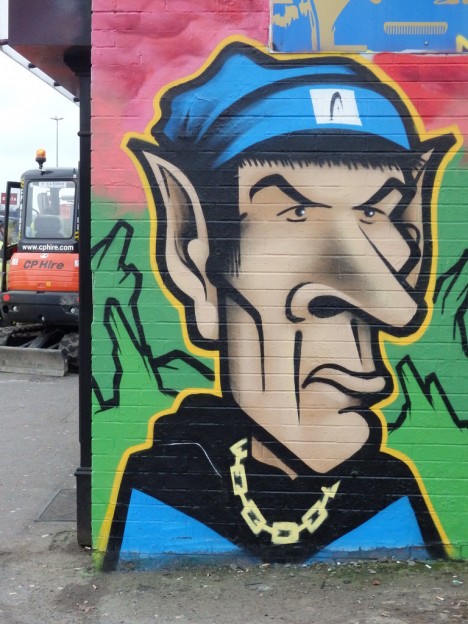 Hey, is that jewelry regulation? No matter, Urban Spock is in da house! Flickr user Andrew Stewart (theandrewstewartshowvi) snapped this pristine mural in Belfast, Northern Ireland, on March 15th of 2015. That date and the exceptionally fresh appearance of the artwork indicate it was done in reaction to news of Leonard Nimoy’s passing. Indeed, Spock is a worldwide cultural icon. 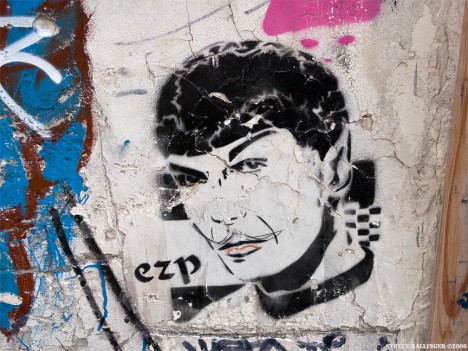 Thank heaven, for little Vulcan girls… Spock appears tres Parisien in this image Flickr user Steven Ballinger snapped back in September of 2006. Maybe it’s the ‘stache that makes him look so urbane, sophisticated and stereotypical; just enough facial hair to be suave but not enough to be evil like the bearded Spock from TOS’s “Mirror, Mirror” episode. 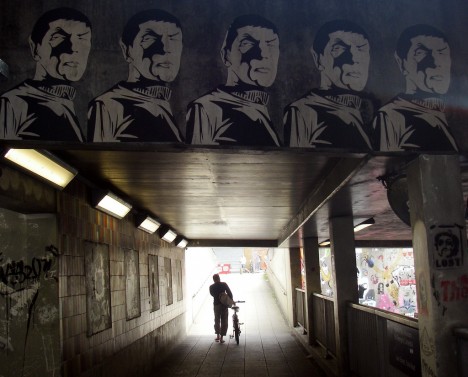 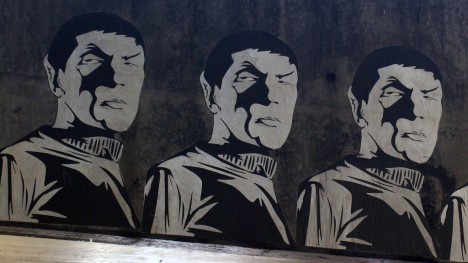 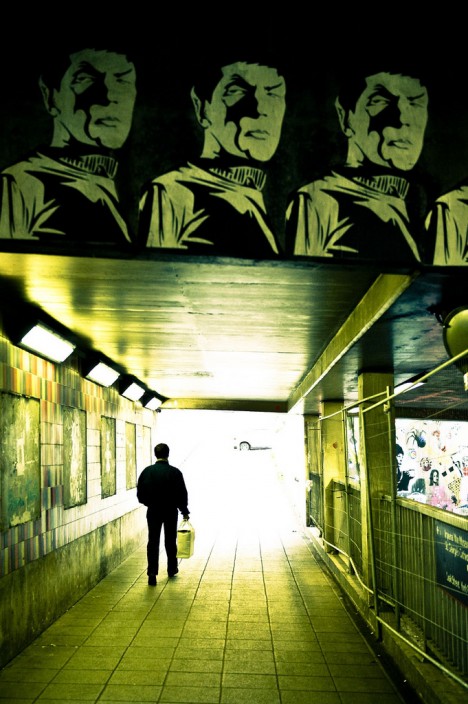 A relic of the Banksy-organized Cans Festival, this graphic Spock Quintet looks down on pedestrians navigating the so-called “Graffiti Tunnel” – a portion of Leake Street running under Waterloo Station in central London. Full props to Flicker users Simon Bleasdale (vapour trail) and Andrew Wilson (hkfuey97) for shooting the scene in May of 2008.

The More The Merrier 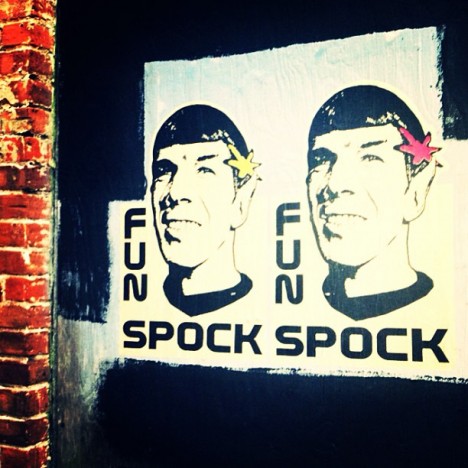 Mr. Spock was rarely seen cracking a smile though on one TOS episode he was positively giddy after falling in love under the influence of alien spores. Perhaps the unknown author of the above street artwork (snapped by Flickr user spectreality) worked from a screencap of that show, who can say? In any case, the meaning we all can derive here is if Spock can have fun, we ALL can have fun. 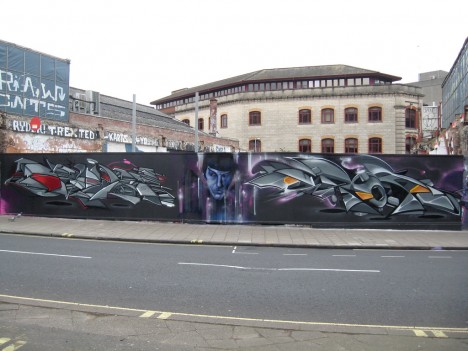 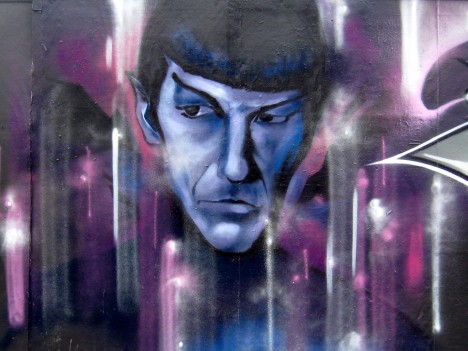 New Year’s Eve of 2008 and the gritty English city of Bristol’s looking grittier than usual (if that’s possible). Luckily some anonymous graffiti artist(s) have done their bit to beautify Bristol with the above Spock-centric mural. Sure looks better than the work-in-progress the hoarding’s unsuccessfully trying to conceal.

Relaxation for the Federation 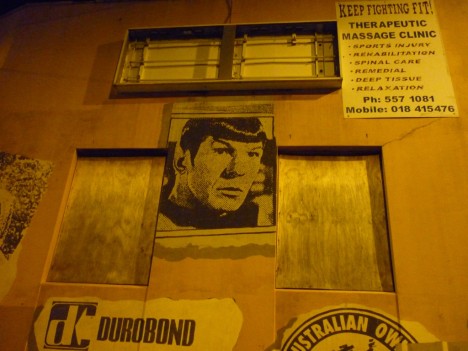 A massage clinic in Sydney, Australia chose a rather unexpected (and doubtless unauthorized) spokes-Vulcan to advertise their wealth of therapeutic services. Guess that mind-meld stuff only goes so far. Credit Flickr user Michelle (~sevenworlds~) for posting the golden-hued image above in May of 2010.