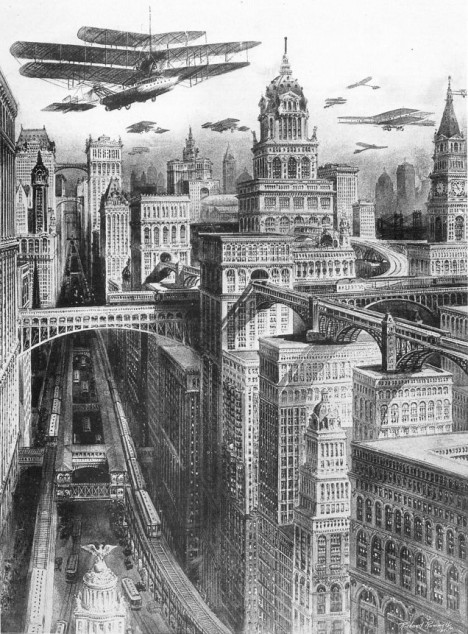 Artist Richard Rummell saw big things for Manhattan in 1910 when he came up with these sketches depicting the future of the city. Published by the New York Tribune, Rummell’s plan was defined by splitting the city’s vertical spaces into levels, each serving its own purpose. In the deepest underground subways, freight cars would haul their payloads from one place to the next. Just above that would lie the subway system for passenger cars. 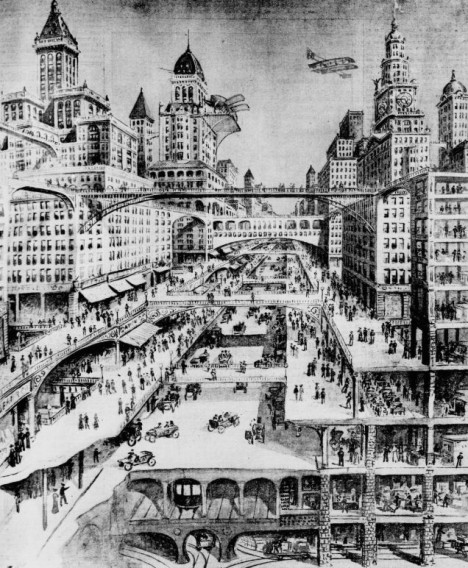 Street level would be reserved for “ordinary vehicles,” and moving sidewalks would take people between buildings. At higher levels, pedestrian sidewalks would connect buildings. Elevated platforms would allow for main street-style congregating and shopping above the nuisance of Manhattan’s traffic. Rummell also envisioned aircraft landing spaces at the tops of buildings. This is one prediction that did become a reality in a way – helipads and heliports can be found in modern New York. 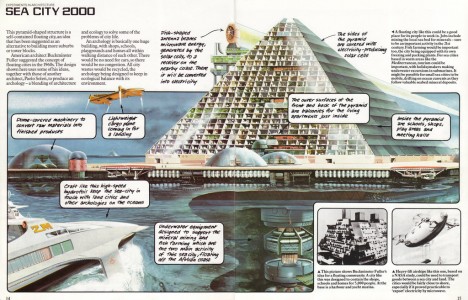 Paolo Soleri and Buckminster Fuller both contributed to this intriguing 1979 idea of a floating city as it might look in the year 2000. The idea was that humans would be forced to move off of land and out to the sea as land became scarce. Sea City is an enormous floating pyramid just off of the African coast. The self-sustaining structure is covered in solar panels on two sides and is equipped with a dish-shaped antenna that would beam the solar power to the nearby coast where it would then be converted to electricity. Gardens, homes, schools, and shops would all be contained within, while below the city workers would toil away at fish farming and mining the sea bed for minerals. 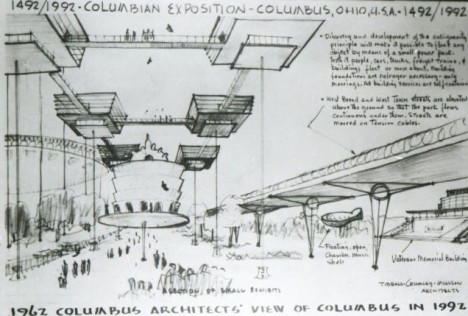 In 1962, Columbus architects were asked to come up with their predictions for the Columbus of 1992. The concept from architects Tibbals-Crumley-Musson is one of the most outrageous. They predicted that anti-gravity technology would be made possible with the use of a “small power pack.” Thus, any structure could be lifted off of the ground and moored by sturdy tension cables. Buildings and roadways would rise far above the ground, allowing for more green spaces beneath.