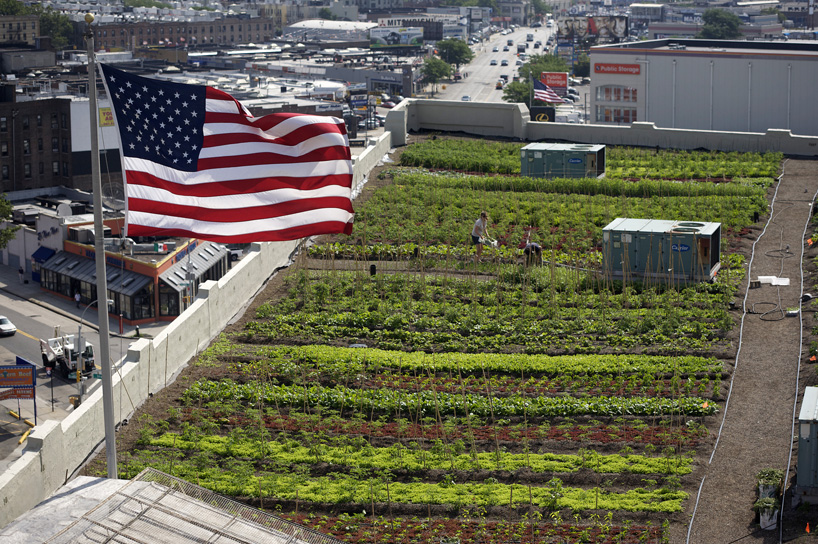 Brooklyn Grange is behind the two largest rooftop soil farms in the world, together growing 50,000 pounds of organic produce per year from 108,000 combined square feet, demonstrating the incredible potential of small-footprint urban farming. Retrofitting an existing roof, the first of their two large projects turned a 40,000 square foot commercial loft rooftop in Long Island City into productive farmland using over a million pounds of soil. In the long run, urban farms have the potential to produce far more food per square foot while using less water and power than conventional fields. 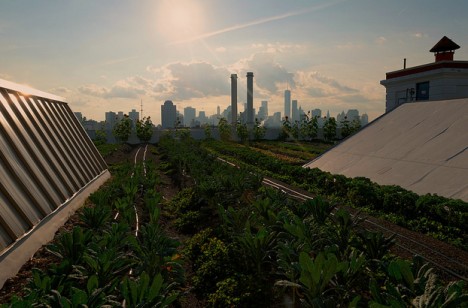 With help from Bromley Caldari Architects, Brooklyn Grange conceived of their initial space as both an in-city retreat but also a functioning laboratory for urban agriculture and source of fresh local greens for surrounding neighborhoods. A series of tightly-packed rows grow a variety of crops, arrayed in between existing rooftop features including a water tower, elevator and HVAC system accessories.

A layer of felt filters and separation fabrics provide a platform for the 8 to 10 inches of soil layered above, all supported by steel-reinforced concrete of the structure below. The farms are currently growing peppers, kale, chard, chicories, ground cherries, eggplants, pac choi, herbs, carrots, turnips, radishes, beans and more (as well as 40 varietals in total).

New York City is home to an increasing number of converted rooftop farms but this remains one of largest in the region and was the biggest such soil farm on the planet at the time of its construction. Brooklyn Grange has since completed a new urban farming project at the Brooklyn Navy Yards that is half again as large as their flagship project featured here (the bigger one is shown in timelapse below).

The rest of the 300,000-square-foot building housing their flagship endeavor  is a loft that has housed businesses in media, architecture, film, fashion, printing, design and other creative industries over the years. Separately from the farm above, the building below was also itself renovated to be greener in the past few years, energy-efficient windows, exterior lighting and signage were added to the structure in addition to plumbing, electrical and elevator retrofits. 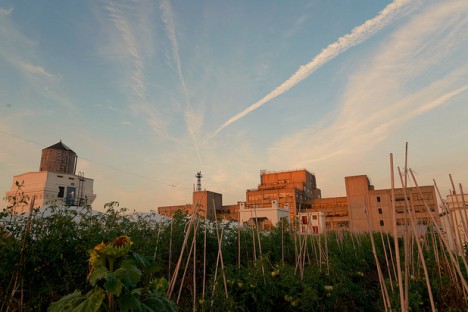 From the Brooklyn Grange website: “When we set out to grow food on the rooftops and unused spaces of New York City, our mission was to create a fiscally sustainable model for urban agriculture and to produce healthy, delicious vegetables for our local community while doing the ecosystem a few favors as well. Currently, with over two acres of rooftops under cultivation in Brooklyn and Queens, we’ve sold over 120,000 lbs of vegetables to restaurants, CSA members and directly to the public via weekly farmstands.” 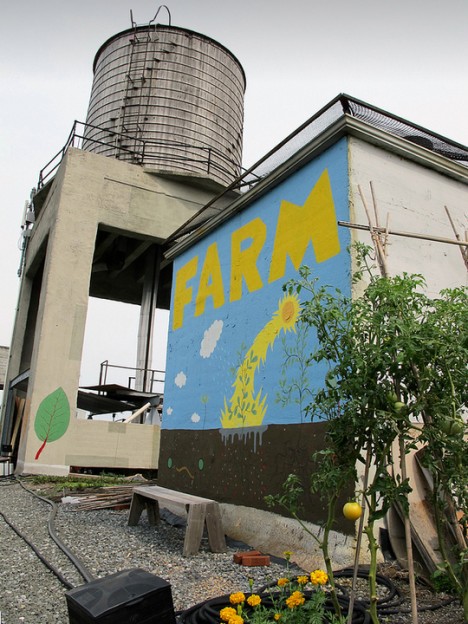 With a series of successes, the group explains its ongoing evolution: “we expanded beyond our mission to grow vegetables: we now keep egg-laying hens and have launched a commercial apiary, cultivating bees for their honey and breeding regional hardiness into their DNA. ” First photo courtesy of Bromley Caldari Architects, second and third via Glen David Andrews and final photograph by Kristine Paulus.