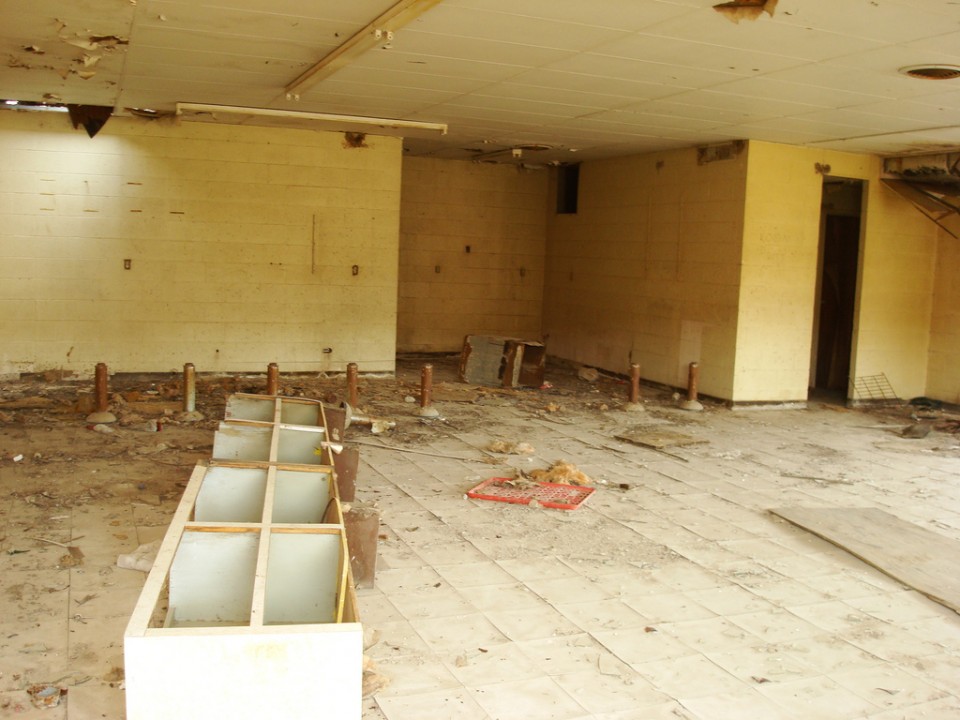 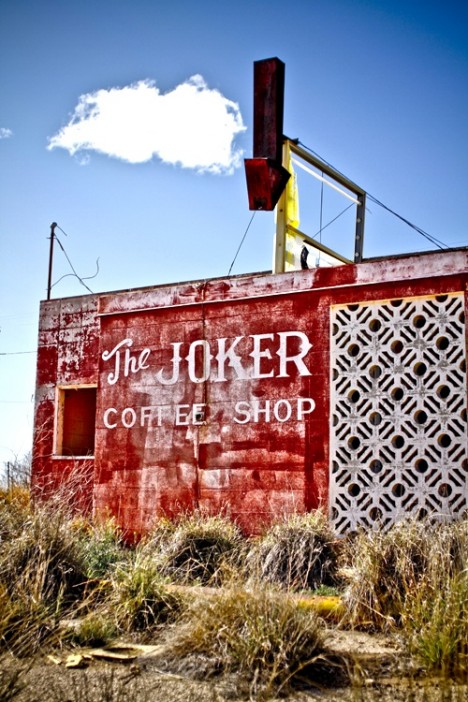 Black gold, Texas tea… not the rich dark liquid you were looking for? Well you’re lookin’ in the wrong place, pardner. Said to be “a far West Texas oil town eatery” that last flourished along with the rest of Penwell, Texas back in the Roaring Twenties, the Joker Coffee Shop looks to have last provided service (with a smile) long, long ago. 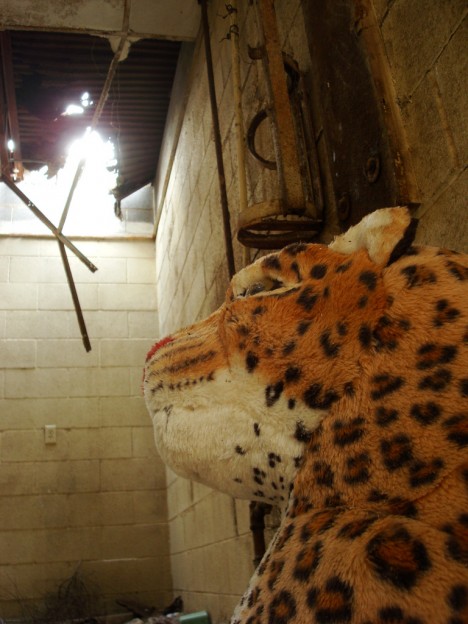 Regarding the stuffed leopard in the former cafe’s restroom, let’s just say they didn’t call it The Joker for nothing. Hey kitty, why so serious? 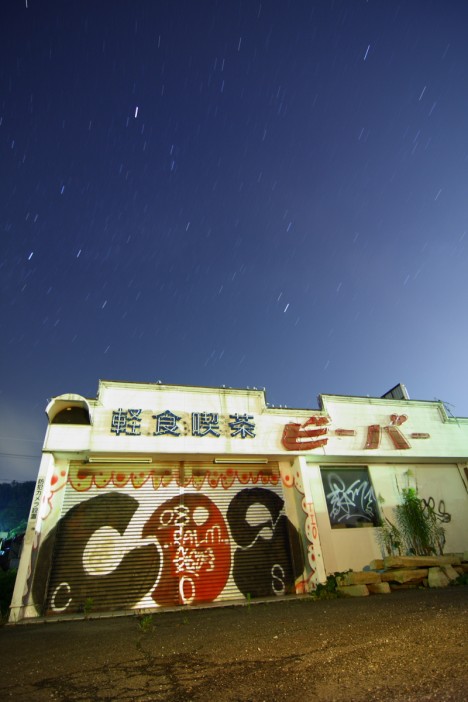 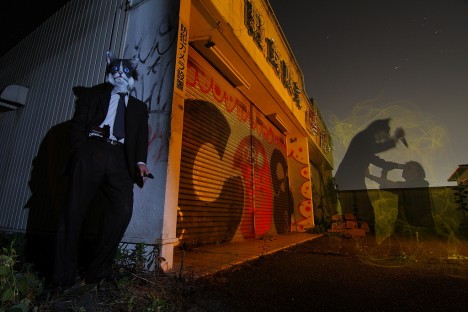 Here’s a late and no doubt lamented “abandoned coffee shop/adult entertainment facility” in Okayama, Japan. The place’s name is “Beaver” (of course); Flickr user Trevor Williams visited the site in June of 2009 for some, shall we say, “creative photography” and we are SO glad he did! 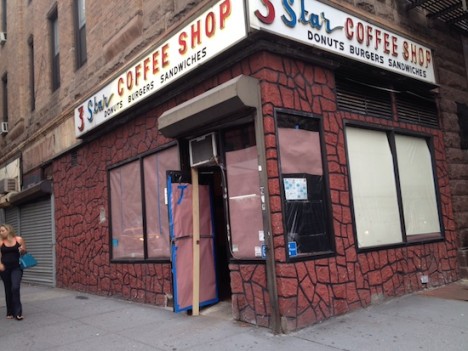 Central Perk it ain’t… The cozy 3 Star Coffee Shop on Columbus Avenue at 86th Street in Manhattan’s West Side has seen better days, as have almost every other store on the block. 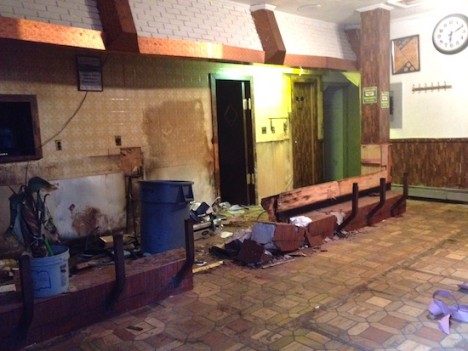 West Side Rag‘s “intrepid tipster Kenneth” (hey, it’s better than being an intrepid hipster) was sent to check out the abandoned coffee shop in August of 2014 and he was, shall we say, less than impressed: “Half torn out. There must have been 1 million flies inside. Clearly, food must have been left inside.” Guess their signature Donut Burger Sandwiches didn’t exactly sell like Cronuts. 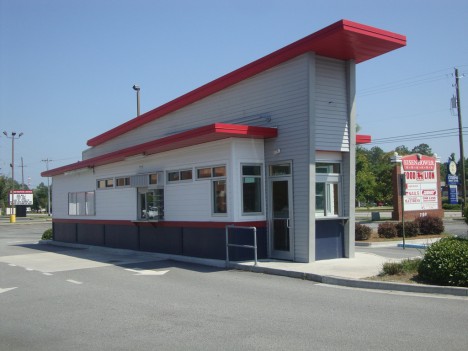 Starbucks may have dealt traditional coffee shops a wicked uppercut; then McCafe moved in to deliver the knockout punch – at least, such can be surmised about the above abandoned Jo To Go in Savannah, Georgia. “This drive-thru coffee shop was built in the parking lot of the shopping center at the corner of Waters Ave. and Eisenhower Drive, behind a McDonald’s, in the spring or summer of 2007,” according to Flickr user C-Bunny, “and had closed sometime earlier this (2010) year.” 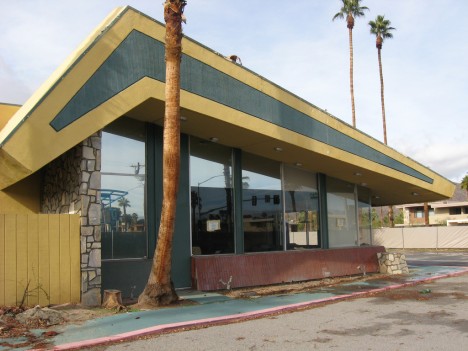 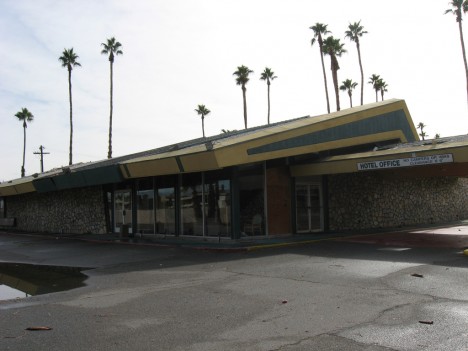 When Flickr user Charles Hathaway snapped the sad state of Denny’s Coffee Shop (and adjoining motel) in Palm Springs, California, he hedged his commentary by stating “It seems like someone has bought the land with the intention of re-opening the motel.” Hope someone’s watering the palms in the meantime. 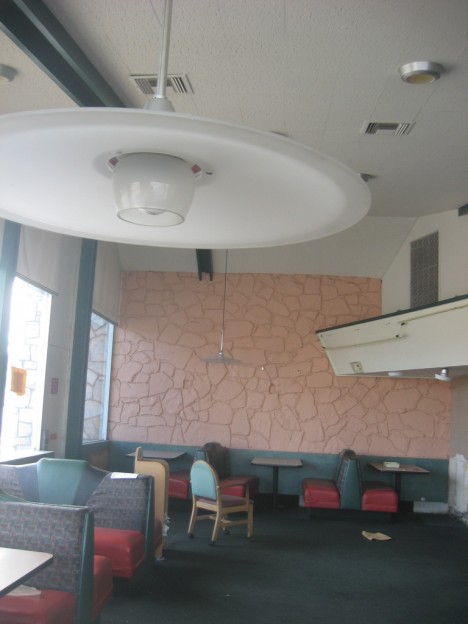 “A restaurant will likely open in this former Denny’s once the motel opens.” That was in January of 2008… what was the ultimate fate of this palm-treed oasis and its Space Age architecture and awesome flying saucer chandelier?