New York City is essentially one massively oversized playground, with interactive art installations ranging from vibrating inflatable globes stuffed under the High Line to mazes in Madison Square Garden just waiting to be discovered by passersby. At any given time, there are dozens of playful outdoor exhibits inviting visitors to climb, touch, listen, connect or simply gaze up in wonder. 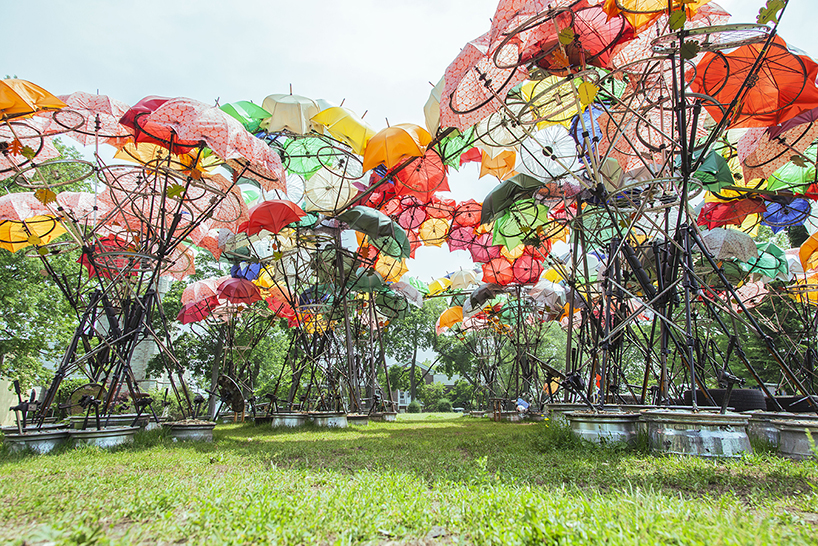 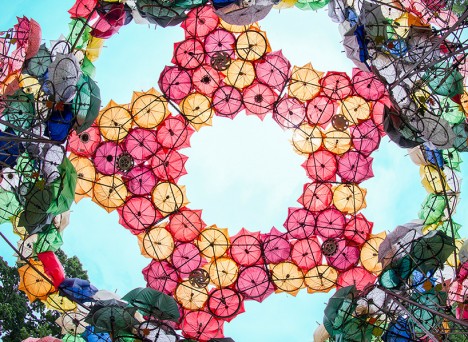 A colorful pavilion made of reclaimed materials has sprouted up on Governors Island in New York City. ‘City of Dreams’ by Izaskun Chinichilla Architects is a visualization of the need to be flexible when designing and carrying out architectural projects, adjusting to changes in budget, specifications and other requirements in an imaginative and intuitive way. Get close and you’ll see all of the broken umbrellas, damaged bicycles, car rims, stools and other waste products that were used to create it. 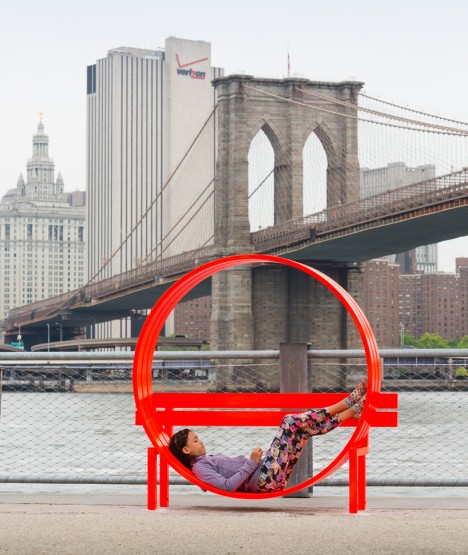 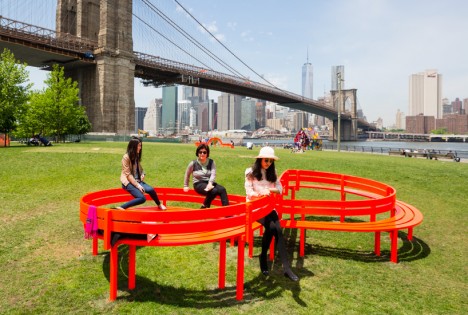 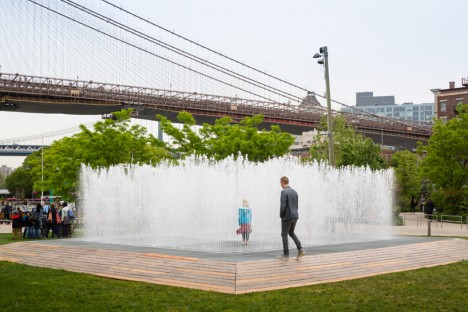 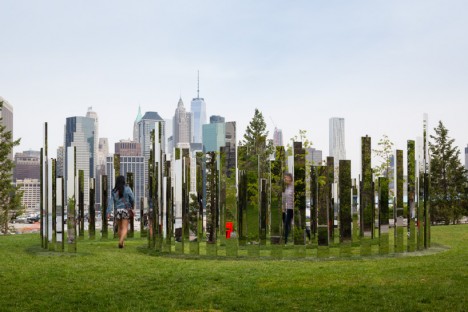 Unlike many art installations, which ask you to look but not touch, this series of sculptural projects by Jeppe Hein beg passersby to interact with them. ‘Please Touch the Art’ is an exhibition of 10 sculptures including benches, a mirror maze and rooms made of water spouts, all located within the waterfront Brooklyn Bridge Park. 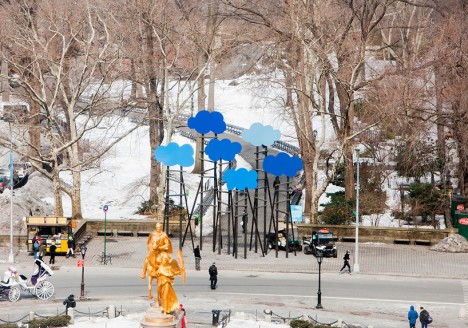 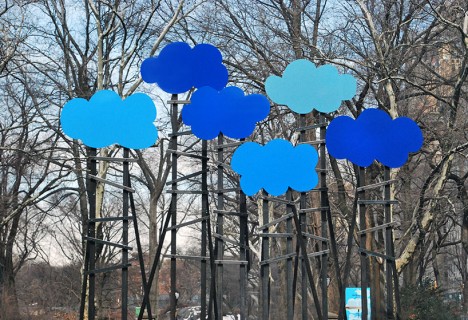 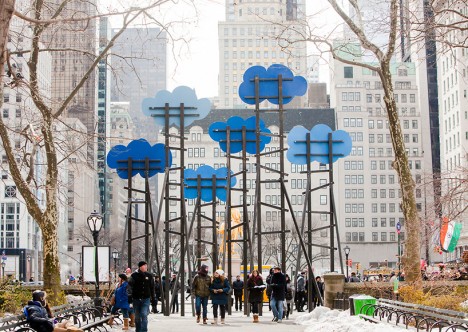 At an entrance to Central Park, childlike clouds in shades of blue hover against a backdrop of winter-bare trees and snow. The effect is that of a stage set for a play, positioning passersby as actors participating in an as-yet-unknown piece of performance. The clouds tower 35 feet above the park on steel ladders.

Cloud City on the Roof of the Met by Thomas Saraceno 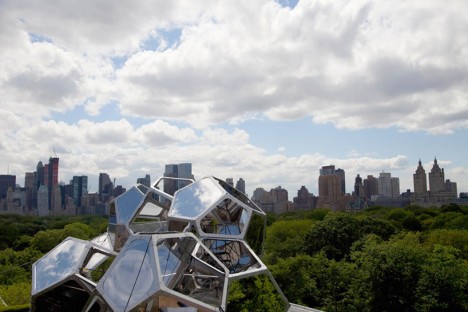 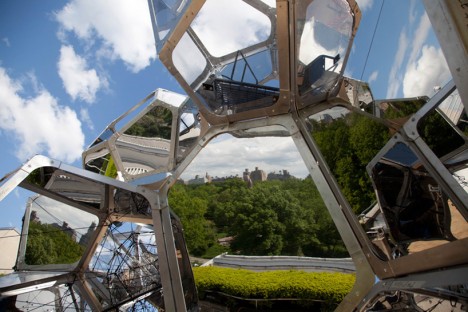 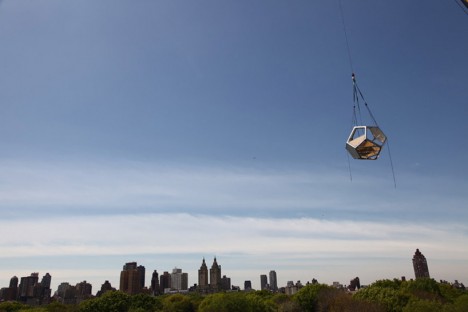 Sixteen interconnected modules come together to form ‘Cloud City,’ a geodesic dome installed on the roof of New York City’s Metropolitan Museum of Art. Argentinian artist Tomas Saraceno, who has installed similar domes in unexpected locations around the world, created the site-specific installation as a fusion of architecture, geometry, biology and ‘human involvement in order.’ Some facets of the modules are mirrored and some aren’t, distorting the view of the city’s skyline and the treetops of Central Park. 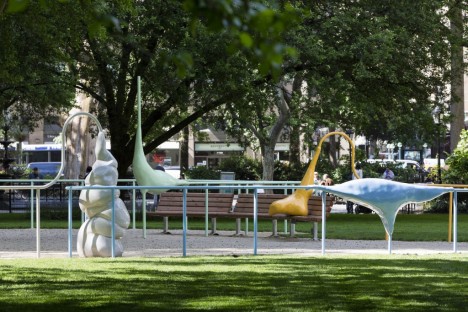 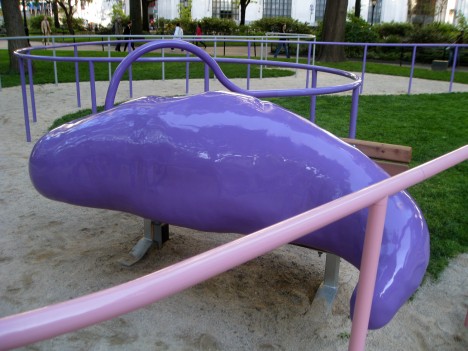 Strange, colorful globs glisten on park benches, along playground railings and in the grass at Madison Square Park, creating new paths and converging around a common seating area. And if anyone is brave enough to actually touch these strange-looking things, they’re rewarded with a variety of sounds and vibrations. ‘Pet Sounds’ by California sculptor Charles Long invites people to add an aural landscape to the physical one in the park. “My re-occuring interest in the uncanny over many years is in full effect here in the Pet Sounds project where something as familiar and literally grounding as a handrail morphs into an unnamable blob that has a very physical presence with some power to dialog with the viewer’s own somatic sense. As one pets the blobs, a wide range of sounds are triggered and are coming from within the bodies of the forms.”