Wind and rain conspired to set loose a gigantic inflatable piece of installation art, turning it into a kind of impromptu performance piece for drivers and bystanders as one (very big) red balloon rolled by. In some regards, the resulting viral sensation has taken on a life of its own, extending the reach of the sculpture far beyond its target audience.

Designed to be a source of urban interaction, the RedBall was in the process of being wedged between two downtown businesses before being redirected by forces of nature. Museum staff, installation participants and a handful of bystanders chased the recently-liberated sphere down the streets, eventually catching, deflating and returning it to the installation site. Instagram user jeremy419 happened to catch much of the action from atop a nearby building. Meanwhile, a hacked version of video puts a fresh tomato-style spin on this unexpectedly interactive work of  art.

The museum’s director of communications, Kelly Garrow, recapped the sequence of events for reporters: “It started pouring rain, so the ball was wet and slippery. The wind picked up, and it popped up and just started going. You can see in the video that’s going viral that it rolled about halfway down a block and then mysteriously took a left-hand turn. It made its way partially down the street before people caught up with it.“

Despite its size (15 feet in diameter), the ball weighs only 250 pounds, minimizing its potential for damage to one bent street sign – quite tame compared to rounded corporate art sculpture set loose in Fight Club as part of Project Mayhem. 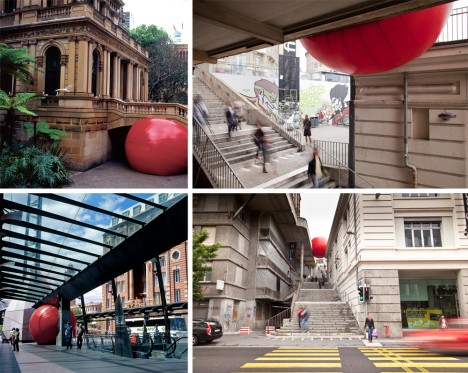 A world-traveling artwork, the ball was created by Kurt Perschke to be pressed into tight spaces and has been in play for nearly a decade without incident. Meanwhile, add this escapee to Nena’s 99 Luftballons lyrics and you get a nice rounded “100 red balloons go by.”