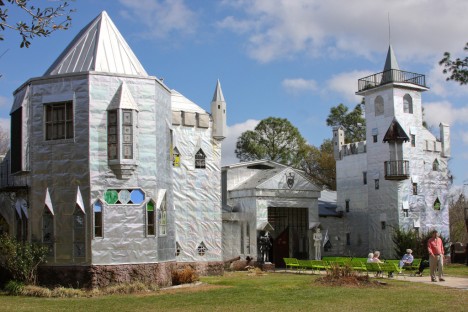 Erected in 1974, another Florida ‘castle’ gleams so brightly in the sunlight, you have to squint to take it in. Howard Solomon built the 12,000-square-foot palace himself and covered it in discarded aluminum printing plates, a clever reuse that makes the structure nearly impossible to photograph on sunny days. Pun-happy tours are available October through June. Though it’s definitely off the beaten path in the swamps of central Florida, it’s worth a detour if you’re driving from one coastal city to another. 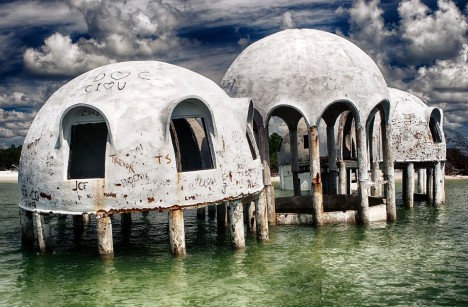 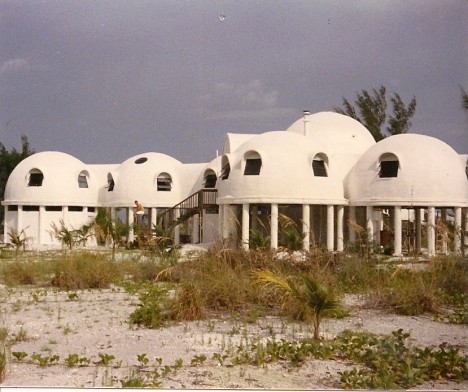 What’s the deal with the collection of six deteriorating pods poking out of the sea at the tip of Marco Island in Cape Romano? Abandoned for decades, their weird looks have resulted in speculation that they were once home to some sort of cult. But once, they were a DIY dream, a self-sustaining self-built solar-powered home. Constructed in 1980, the dome houses were weird enough even when brand new, with one rumor claiming they were guarded by machine guns. But 1992’s Hurricane Andrew let water inside, and in the years that followed, many vacation homes in the area were left to rot. Hurricane Wilma washed away much of the coastline in 2005 and the domes were claimed by the sea. Still standing, they’re only accessible by boat, and sometimes used as a fishing base. 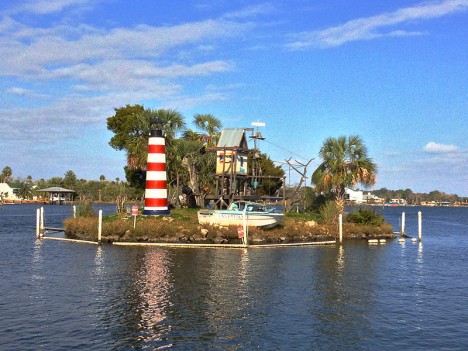 In the middle of the Homosassa River, in the sleepy Gulf Coast town of the same name, an island that started out as a sort of detention center for monkeys is now known as Monkey Island. A developer had workers add some dirt onto what was once just a pile of rocks to keep boaters from bottoming out and thus, the island was born, so he threw up a lighthouse. The developer also owned a small wildlife attraction (now known as Homosassa Wildlife State Park), where he kept a small group of retired research monkeys that were getting a little too obnoxious to handle. So they were banned to the island, and the developer built them their own personal Alcatraz. 40 years later, some of the original residents and a few new monkeys still frolic on the island to the delight of boating tourists. 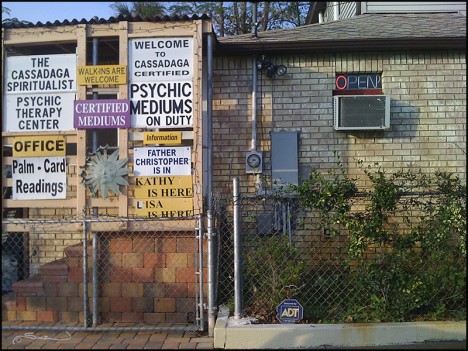 (image via: queen o the universe)

Many a Floridian came to be a resident of the state by way of New York, so it’s no surprise to learn that the famous New York spiritualist community in Lily Dale has a Sunshine State offshoot. The Cassadaga Spiritualist Camp was founded in 1875 with help from Lily Dale members and is home to dozens of spiritualists and mediums to this day. Have your palm read, get a psychic prediction or attend a seance. You can even take part in their Sunday Services.