In recent years the Monument to the Soviet Army in Sofia, Bulgaria has become a colorful canvas for protesters, much to the chagrin of Russian politicians. 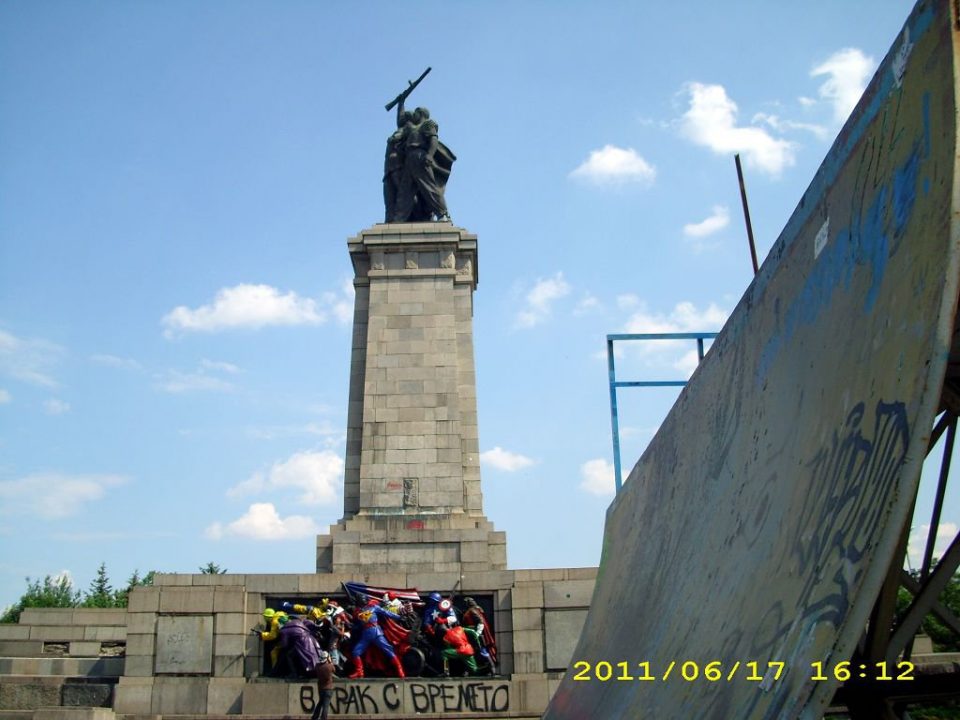 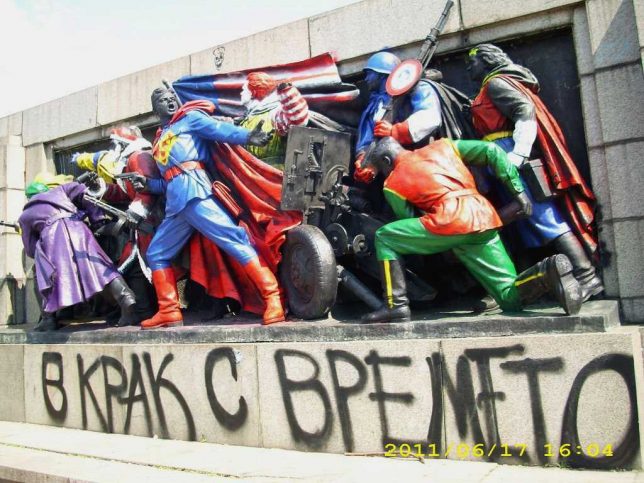 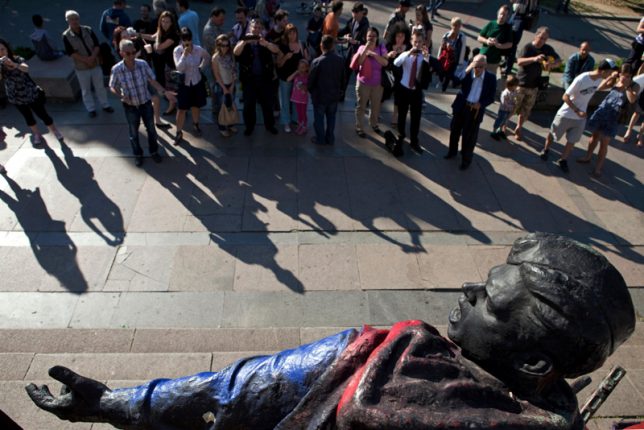 The Monument to the Soviet Army is quite large as military memorials go. Built in 1954, the monument is centered by a 120-ft-tall stone plinth supporting a statue of a Soviet soldier surrounded by admiring Bulgarian women. The monument also features large bronze sculptural compositions on all four sides at ground level. One of these secondary compositions was “artistically vandalized” on June 17th of 2011 by Destructive Creation, a group of street artists who for a variety of reasons have chosen to remain anonymous. 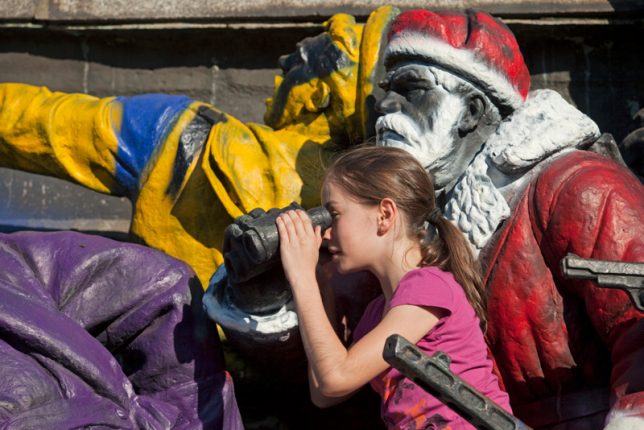 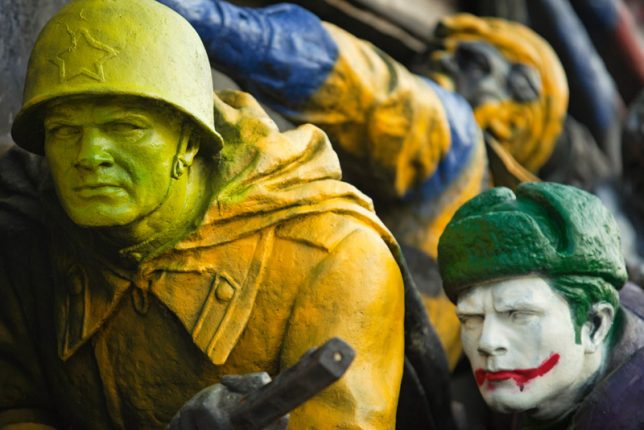 Destructive Creation descended on the monument at night and were able to paint every figure in the pantheon of attacking soldiers without interruption. The result was breathtaking no matter what one’s political bent, as the onrushing platoon of Soviet troops was transformed into a bizarre version of the Justice League: from left to right there’s The Mask, The Joker, Wolverine, Santa Claus, Superman, Ronald McDonald, Captain America, Robin, and Wonder Woman. 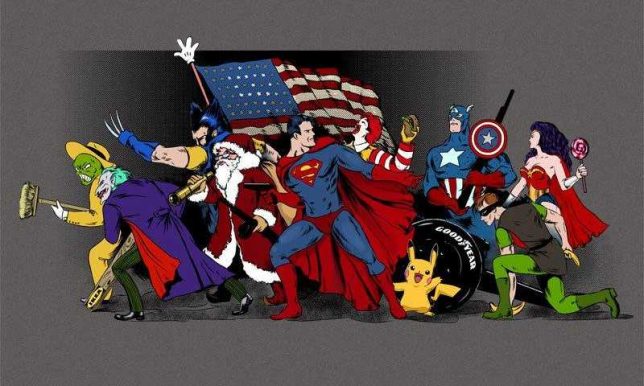 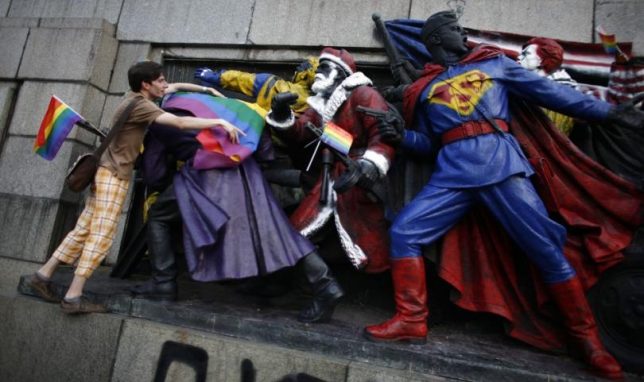 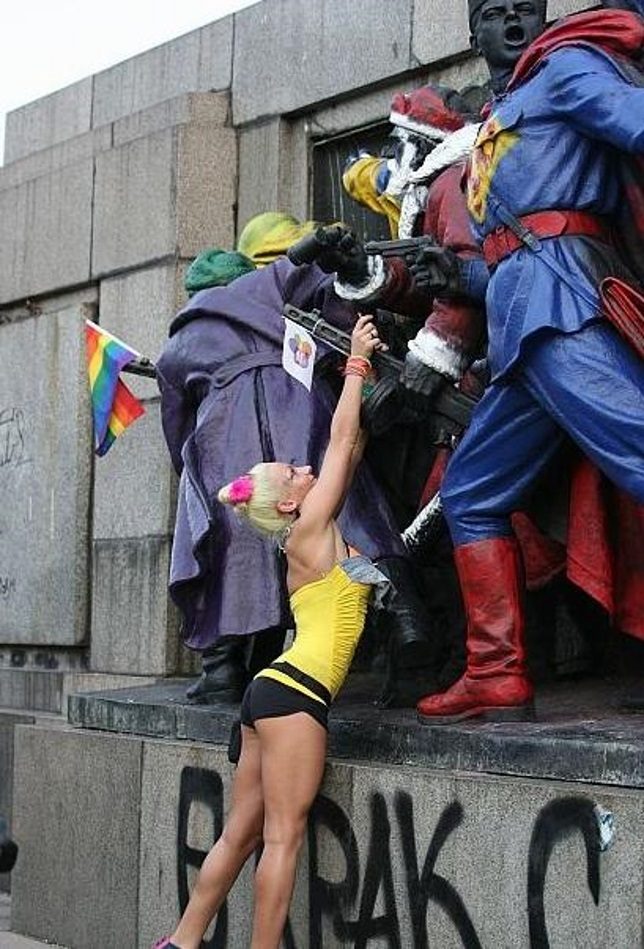 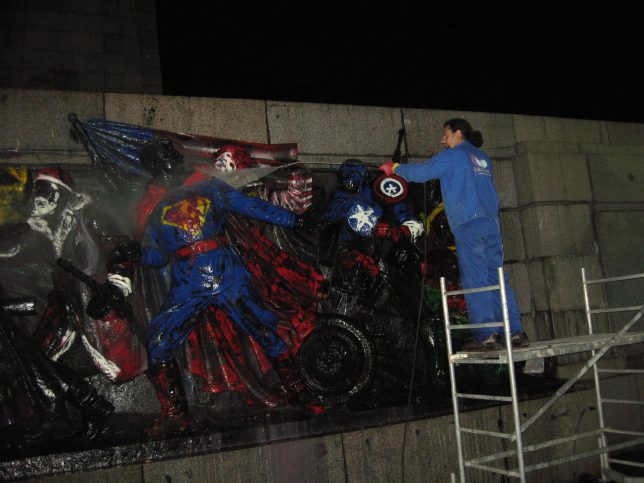 Spray-painted black text below the figures translates to “In Step With The Times”. Activists embellished the monument the next day, during the Fourth Annual Sofia Pride Parade, before city workers power-washed the monument. 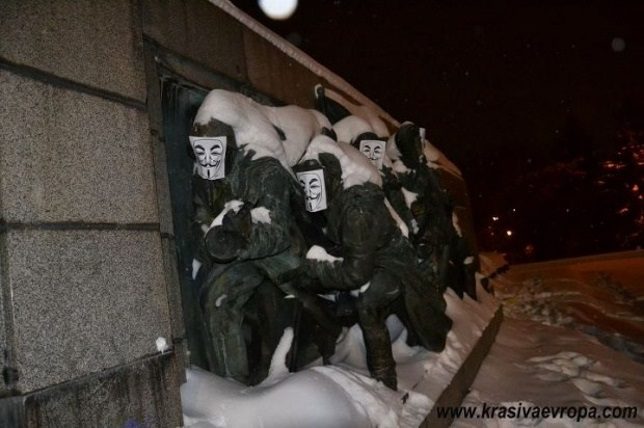 The initial vandalizing of the Monument to the Soviet Army resulted in an explosion of international publicity, mainly due to the skill and content of the artwork. In general the reaction was one of bemused admiration, especially from the global geek community, but Russia’s Foreign Ministry was of a different mind. Not only did Russia vocally condemn the vandalism, they pressed the Bulgarian government to find, arrest and punish the artists. This only served to embolden a host of copycat graffiti artists and make the monument the focus of repeated street art protests. 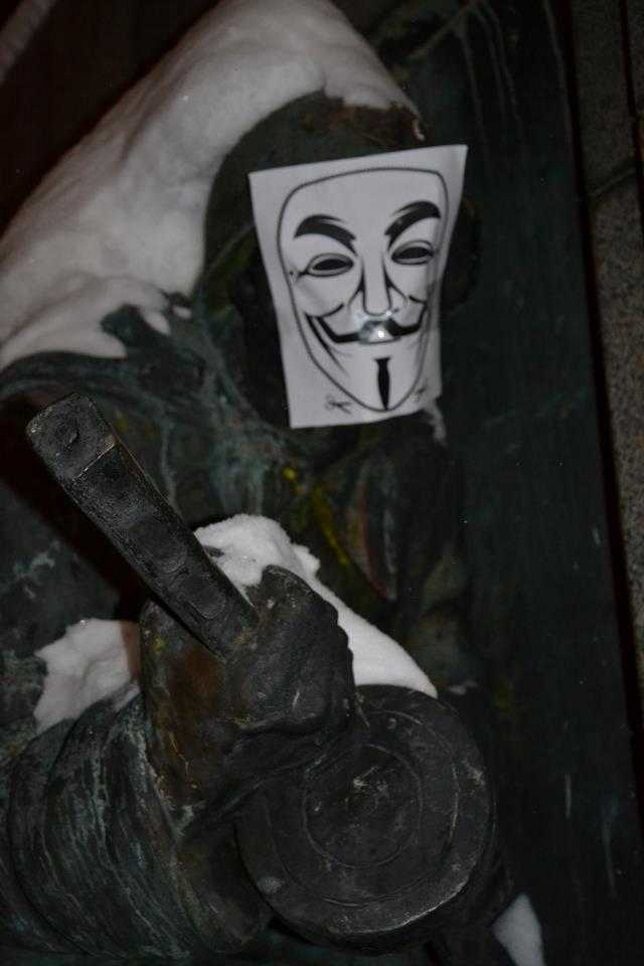 The next such incident occurred on February 10th, 2012 when the monument’s soldiers were fitted with Anonymous masks of Guy Fawkes in conjunction with anti-ACTA (Anti-Counterfeiting Trade Agreement) protests being held all over Europe. Not certain if the perpetrators were anonymous or Anonymous. 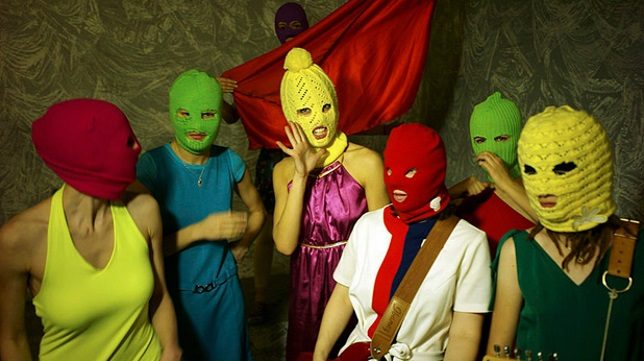 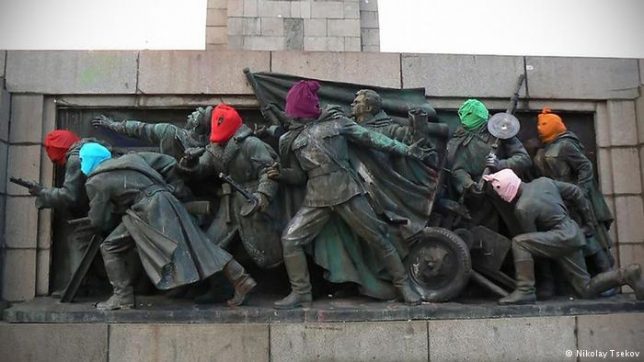 On August 17th of 2012, three previously arrested members of Russian feminist protest punk rock band Pussy Riot were convicted by a Russian court of “hooliganism motivated by religious hatred” and were sentenced to two years’ imprisonment each. 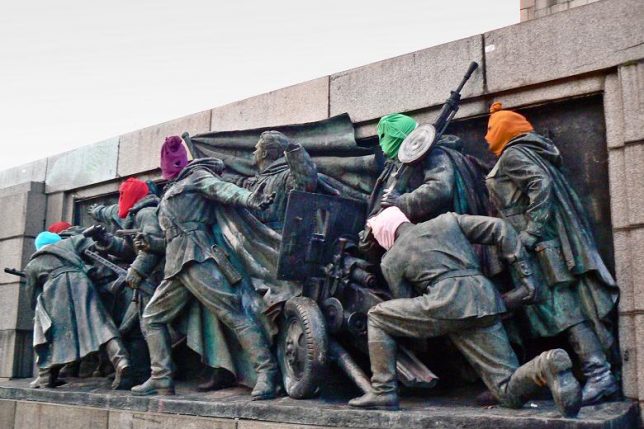 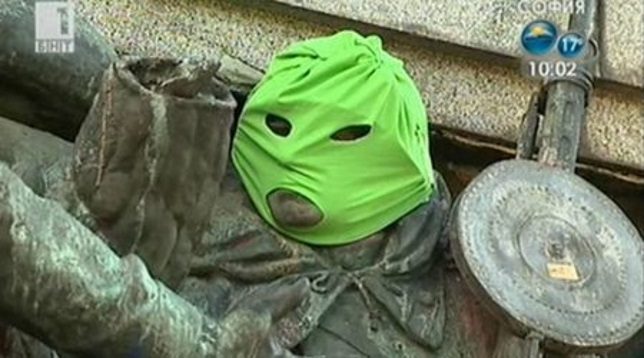 The sentencing was widely criticized outside Russia and on the same day of the conviction, activists placed colorful knit balaclavas (Pussy Riot members’ trademark costume) over the heads of figures at the Monument to the Soviet Army in Sofia. 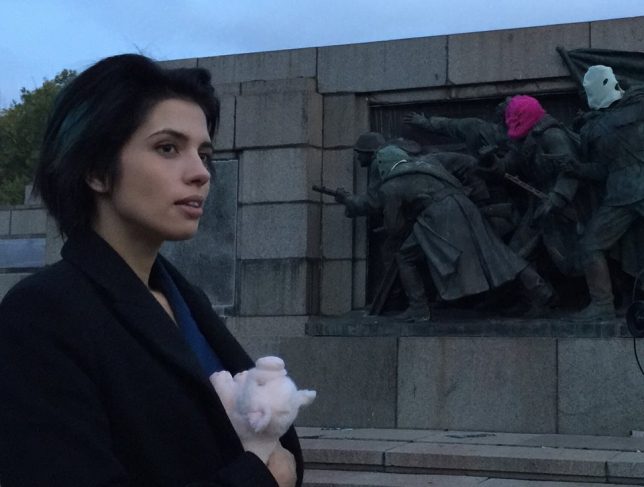 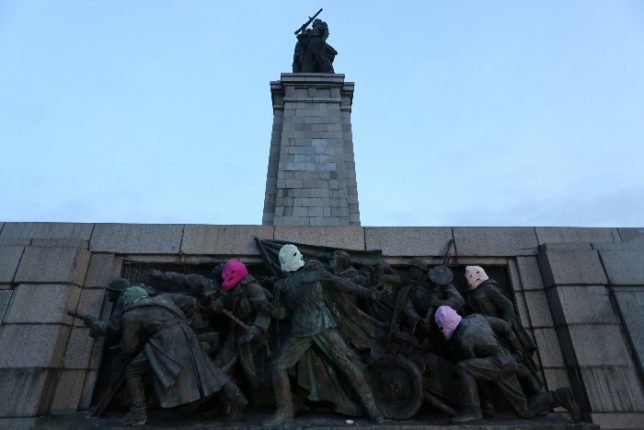 On October 15th of 2015, Pussy Riot member Nadezhda Tolokonnikova visited the monument and participated in a reenactment of the original masking event. 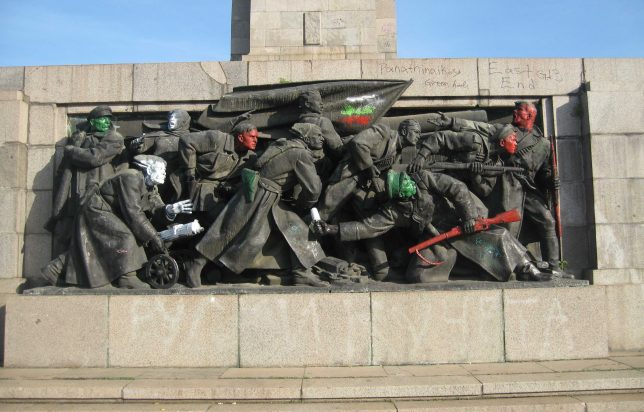 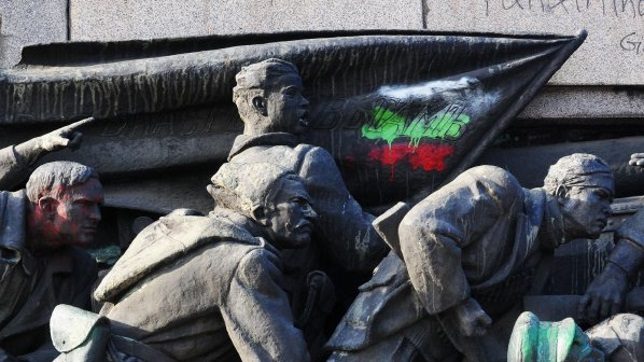 Observed initially in 2010, the first day of February is officially the Day of Remembrance and Respect to Victims of the Communist Regime in Bulgaria. Approximately 20,000 to 30,000 Bulgarians lost their lives due to state-ordered repression between 1946 and 1990. 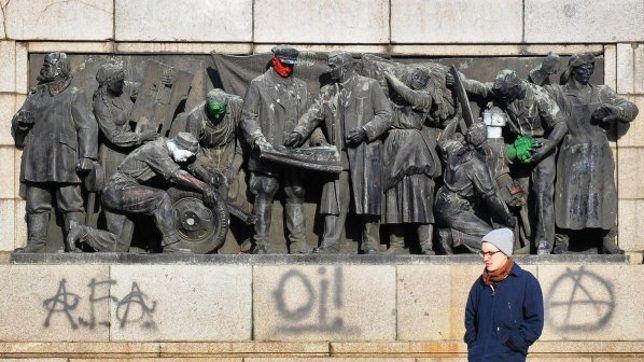 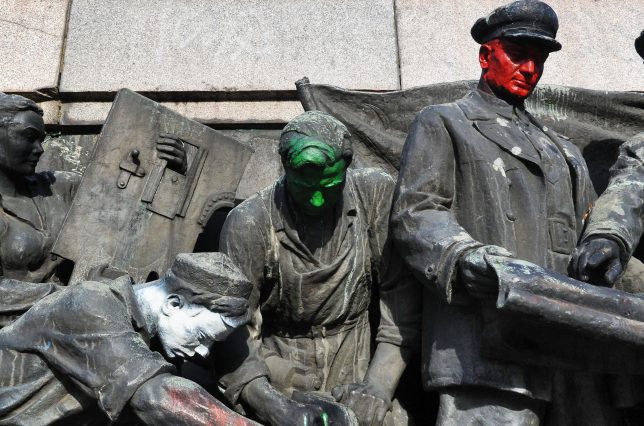 On February 1st of 2013, areas on several sides of the Monument to the Soviet Army were daubed with red, green and white paint – the colors of the Bulgarian flag.