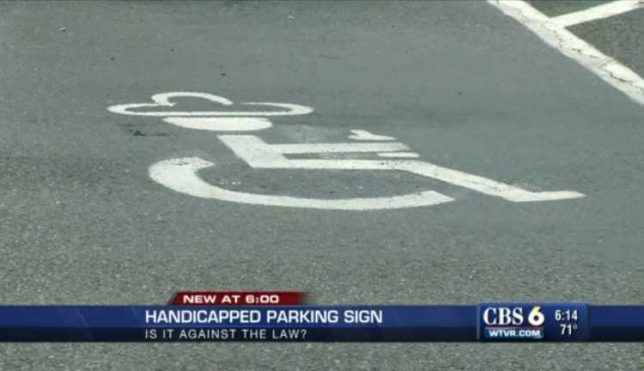 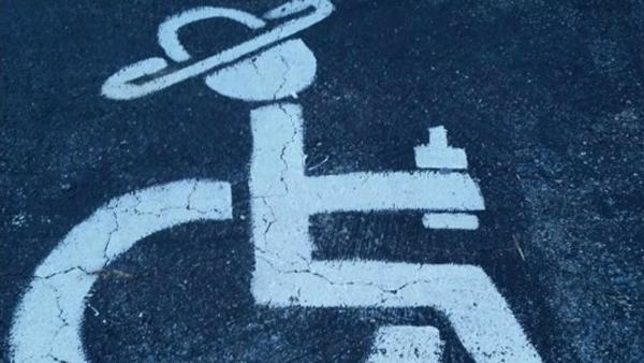 No mas cerveza? So it would seem, as this cheeky disabled parking stencil outside the Mi Jalisco restaurant in Midlothian, Virginia illustrates. The hand-painted graphic raised a few patrons’ eyebrows enough to be the subject of a WTVR CBS 6 News report on September 30th of 2014. When asked about the sign, the Mexican restaurant’s current owner explained the stencil was painted by the store’s previous owner. Wonder where that guy is now… 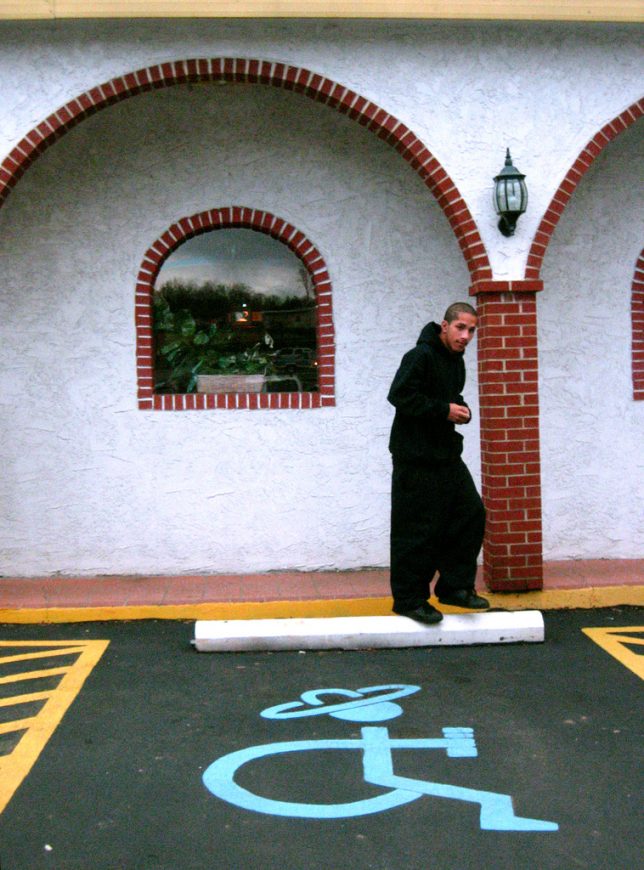 We can’t say for certain if there’s any connection but there is (or was 10 years ago) a very similar stencil outside the Guadalajara restaurant in northern Charlottesville, Virginia. Flickr user A B (abyler) dated her image to late December of 2006 so determining who came first is kind of a pollo y huevo question. 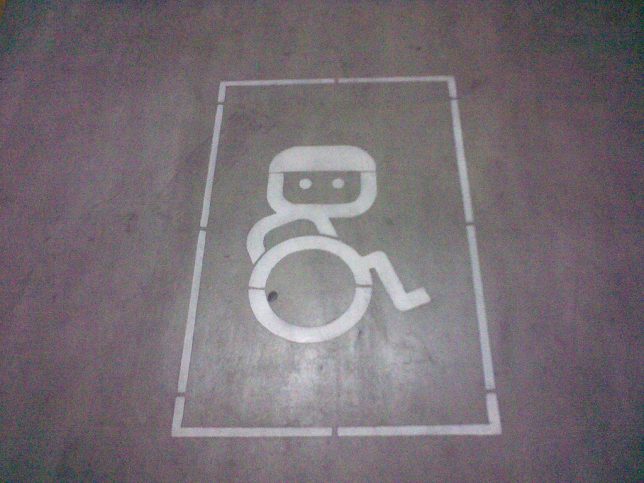 This odd “helmeted” wheelchair stencil looks like something recycled from the 2008 Beijing Paralympic Games, not that there’s anything wrong with that… is there? Flickr user kickibeijing captured the curious graphic in their Beijing apartment’s basement parking lot on April 24th of 2010. At least someone’s making an effort to modernize the familiar minimalist graphic icon and give it some badly-needed personality. 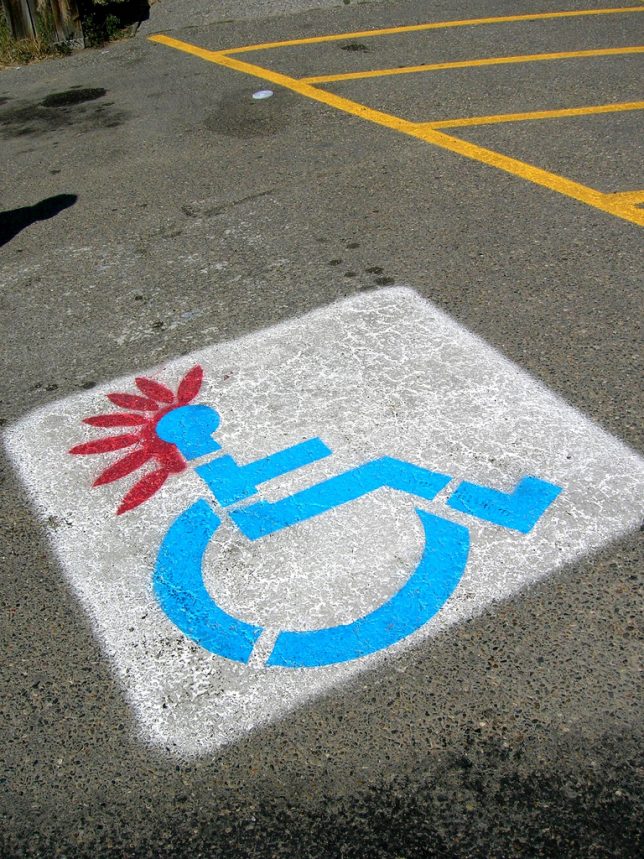 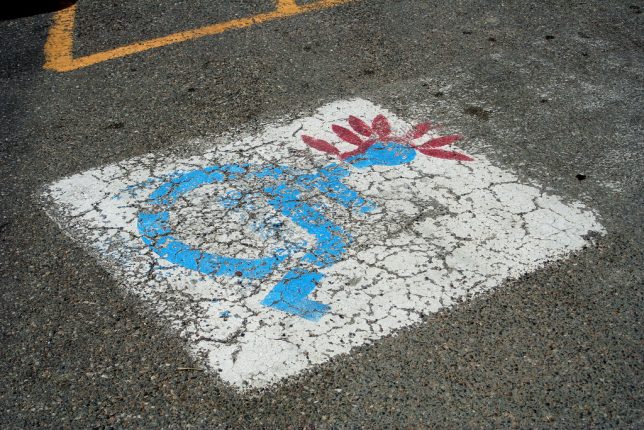 These handicapped parking stencils can be found at The Custer Battlefield Trading Post parking lot near the historic Little Bighorn Battlefield in Crow Agency, Montana. Flickr users Kevin (Kooimanstra) and Scott Burgan (WY Man) snapped these questionably-enhanced stencils on August 5th of 2006 and June 29th of 2007, respectively. Hmm, wonder if the lot has other spaces with the icon wearing a 7th Cavalryman’s hat… no need to add any hair. 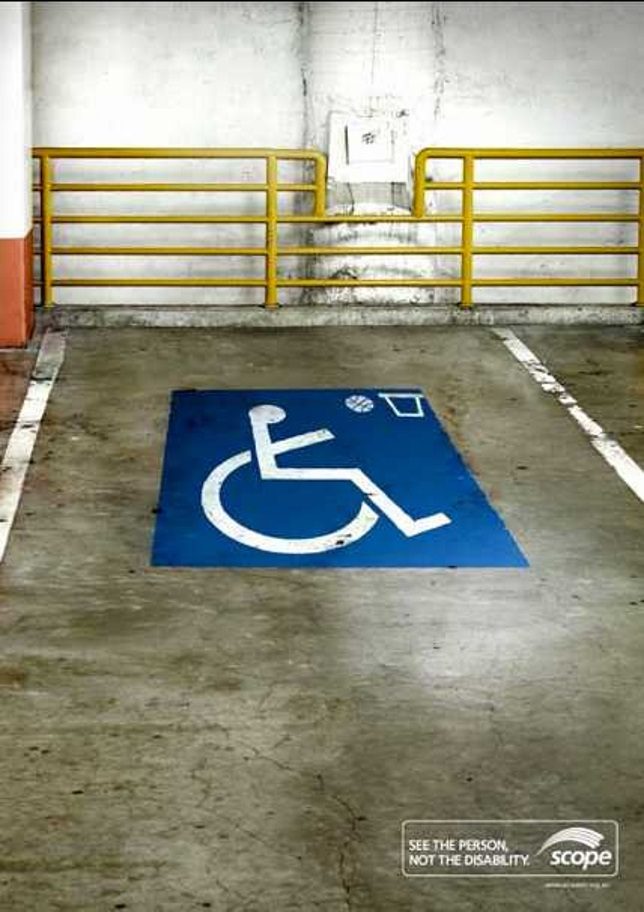 Scope is an Australian non-profit dedicated to providing a range of services for the disabled. As featured at the Love That Max blog, one of Scope’s initiatives involved minimally modifying for-the-handicapped signage to reflect the fact that disabled people are not defined by their disability. Besides the basketball-shooter above, other signs depict the icon playing tennis, playing the saxophone, and working a computer keyboard.

Take It Or Leave It 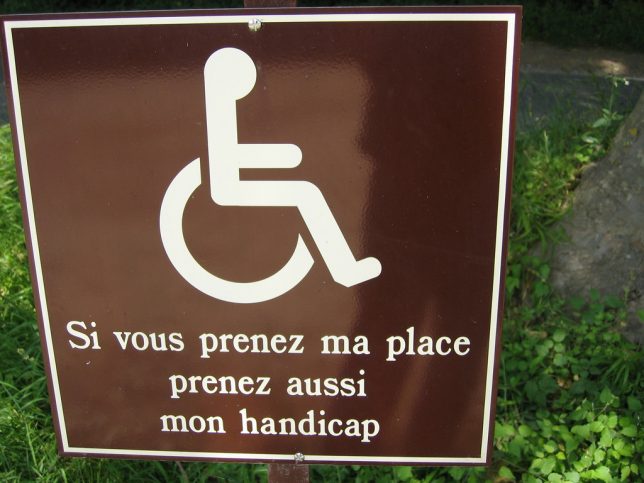 These three images of signage from French parking lots address the ongoing unfortunate issue of able-bodied drivers using parking spaces reserved for the physically challenged. The English translation is “You take my space then take my handicap too.” 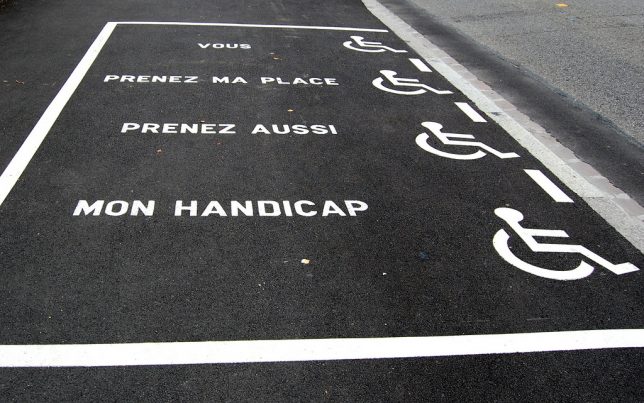 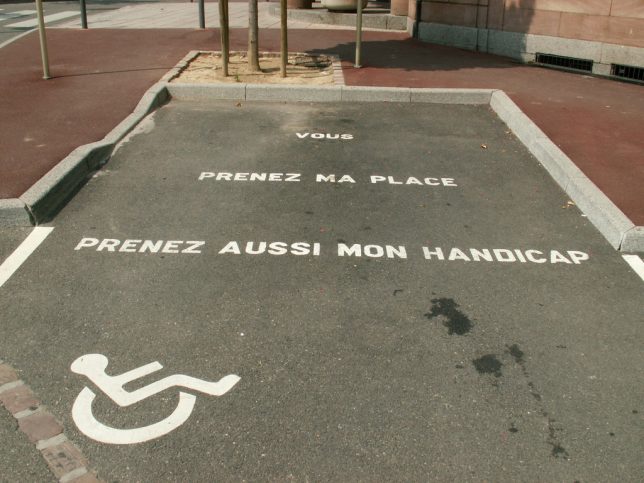 Put that way, inconsiderate parkers might think twice about where they park. Images courtesy of Flickr users Kevin Wells (hokiekev99), Emiliano (loungerie) and boulanger.IE snapped the photos above in June of 2005, August of 2008 and July of 2005 respectively.

A Place In The Sun 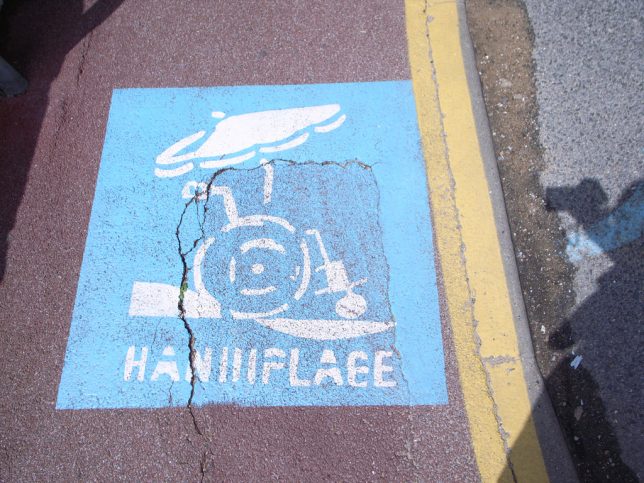 Flickr user Nicholas Nova snapped the above elaborate stencil in Saint-Jean-de-Luz, a pretty seaside town in southwestern France’s Basque region. The sun-baked stencil appears to depict either a wheelchair shaded by an umbrella or a disabled person being abducted by a UFO. In space, no one can hear your wheels squeak.